Beauty is in the eye of the beholder, and so is the bizarre. These extraordinary edifices are the result of architectural whimsy pushed to its limits. Whether you consider them awe-inspiring or eye sores, the craziest houses in Europe are guaranteed to capture your attention.

Though it looks like something from the future, the Palais Bulles (or Bubble Palace) has been going strong since 1975. The 1,200-square-metre terracotta-coloured complex includes 10 bedrooms, three swimming pools, and a 500-seat amphitheatre. The bizarre mansion once belonged to fashion designer Pierre Cardin, who hosted many a runway show and debauched after-party on the property.

Bohumil Lhota began building this unique home in 1981. He wanted to be closer to nature, to take advantage of the organic movements of the sun, and to benefit from naturally cool ground temperatures. The house sits on a rotating mechanism that allows Lhota to both lift and turn the structure, ensuring that it always catches the daylight. The majority of the building is underground, which makes it easier to regulate the temperature.

Though it looks like a house on wheels, Austria’s Auto Residence isn’t actually mobile. Designer Markus Voglreiter makes the most of the eco-friendly home’s compact space. The house was built using an energy-efficient heating and insulation system, which drastically reduces energy consumption. The facade is just for fun, intended to give new life to the 70s-style suburban home that was in its place.

No, this isn’t the work of a Photoshop prankster. The aptly-monikered Upside Down House in Poland really does stand on its roof, and the interiors are flipped to match. Inspired by the country’s former communist rule, Polish philanthropist and designer Daniel Czapiewski built the topsy-turvy home as a reminder of “wrong-doings against humanity” and the backwardness of the world. Many visitors leave the disorienting structure feeling seasick.

At first glance, Castel Meur is just a classically beautiful French house. But zoom out and you see that it’s the location that makes it strange: the home is inexplicably squeezed between two towering rocks on a tiny outcrop in the English Channel. It was the ultimate private escape, until it was featured on a postcard and tourists flocked to the remote location for photo ops.

Meanwhile, in Russia… local crime lord Nikolai Petrovich Sutyagin spent 15 years constructing what was reportedly the world’s – or at least Russia’s – tallest wooden house. He called it the ‘Eight Wonder of the World’, but authorities weren’t nearly so impressed. The building was condemned as a fire hazard and much of it was removed in 2009. The remaining fragments were fittingly destroyed by a fire in 2012.

The Hundertwasserhaus seems out of place amongst the imperial grandeur and monumental architecture of Vienna, but it has become one of the city’s most famous sights. The quirky building is a residential block of flats designed by Friedensreich Hundertwasser, a radical painter and architect who embraced uneven surfaces, curvy lines, vibrant colours, and mosaic detail. He called it, “A house of beauty barriers, a place of not regulated irregularities, in which you have a good conscience towards nature.”

A pineapple building would be a whimsical choice in Hawaii, but in Scotland it’s downright eccentric. The odd feature sits atop Dunmore House, the ancestral home of the Earls of Dunmore, and is an exceptional example of the stonemason’s craft. The pineapple presides over an immense walled garden and today is open to the public as a holiday rental home.

Long before Sharknado, there was this. The Headington Shark is Oxfordshire’s most interesting resident, a 7.6m fibreglass sculpture erected on the 41st anniversary of the dropping of the atomic bomb on Nagasaki. The homeowner has said, “The shark was to express someone feeling totally impotent and ripping a hole in their roof out of a sense of impotence and anger and desperation… It is saying something about CND, nuclear power, Chernobyl and Nagasaki”.

The Heliodome, a bioclimatic solar house in the Alsatian countryside, takes the shape of an enormous sundial. The structure is set on a fixed angle in relationship to the sun’s movements to provide shade and cool temperatures during the summer months. In cooler seasons, the lower angle of the sun floods light through the large windows and naturally warms up the living space. Despite its eco-friendly benefits, many have complained about the Heliodome’s interstellar appearance. 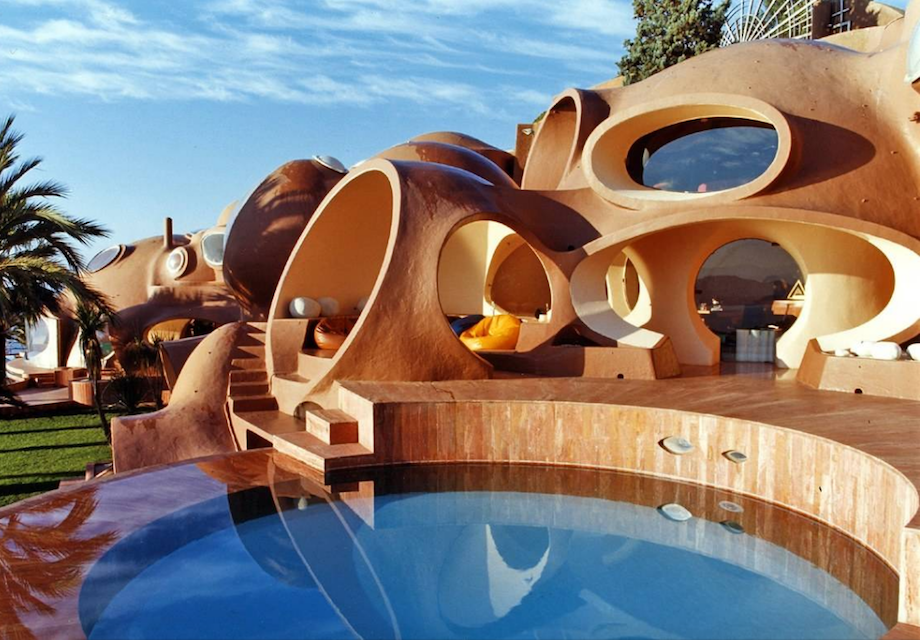 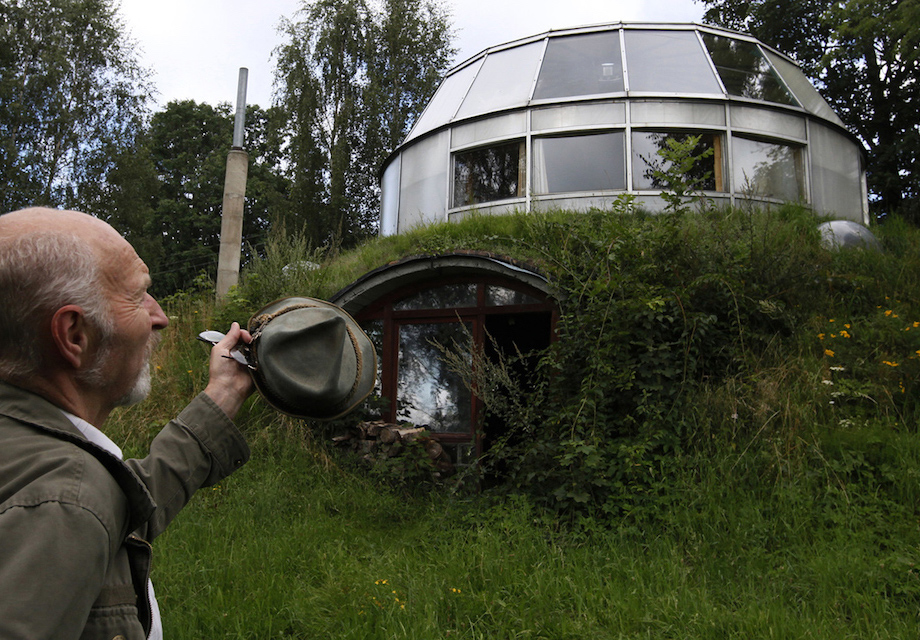 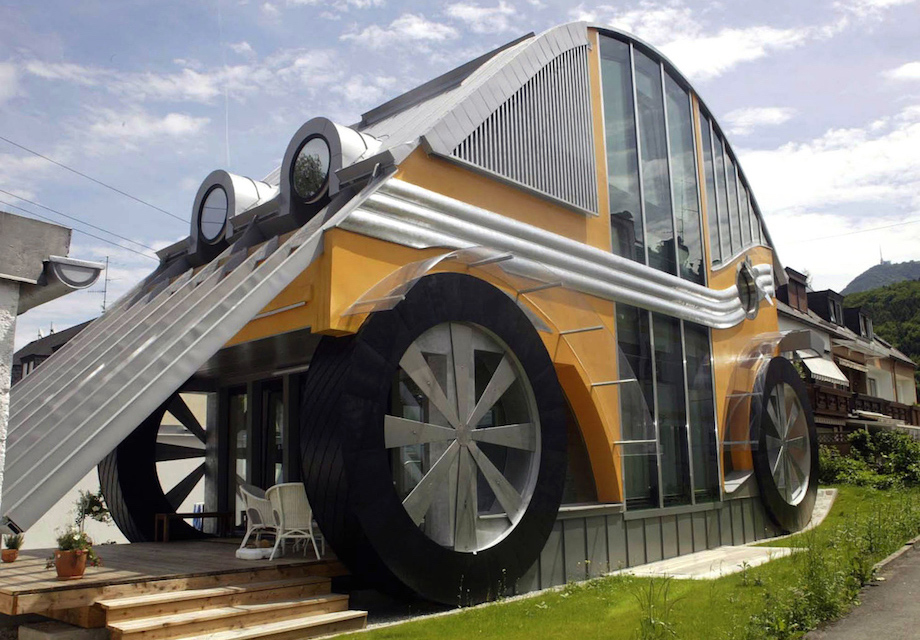 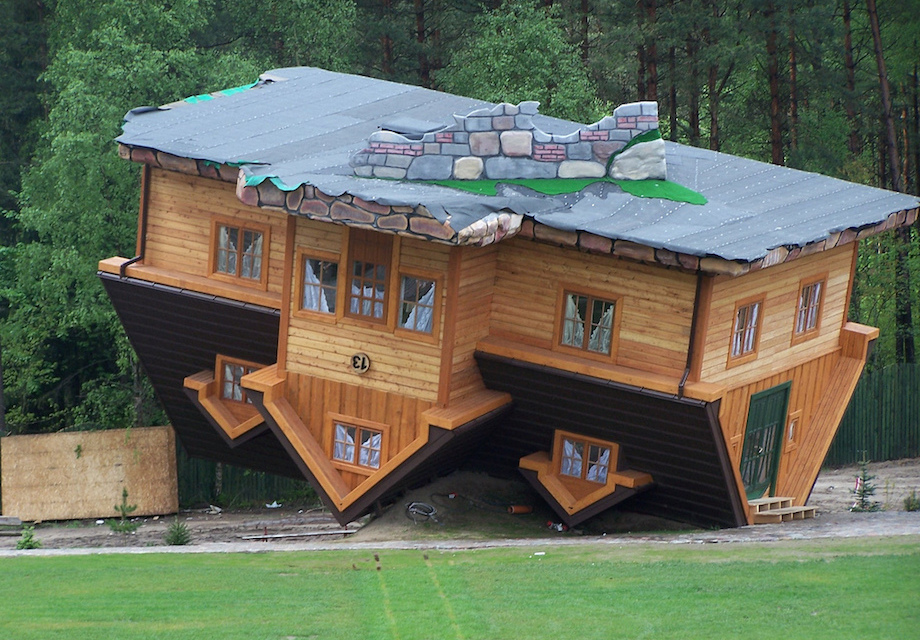 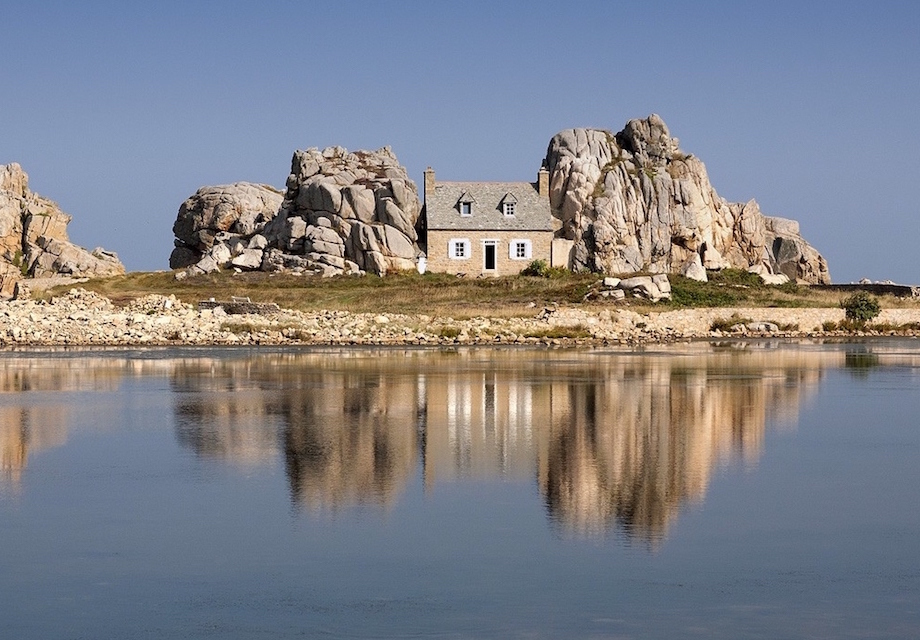 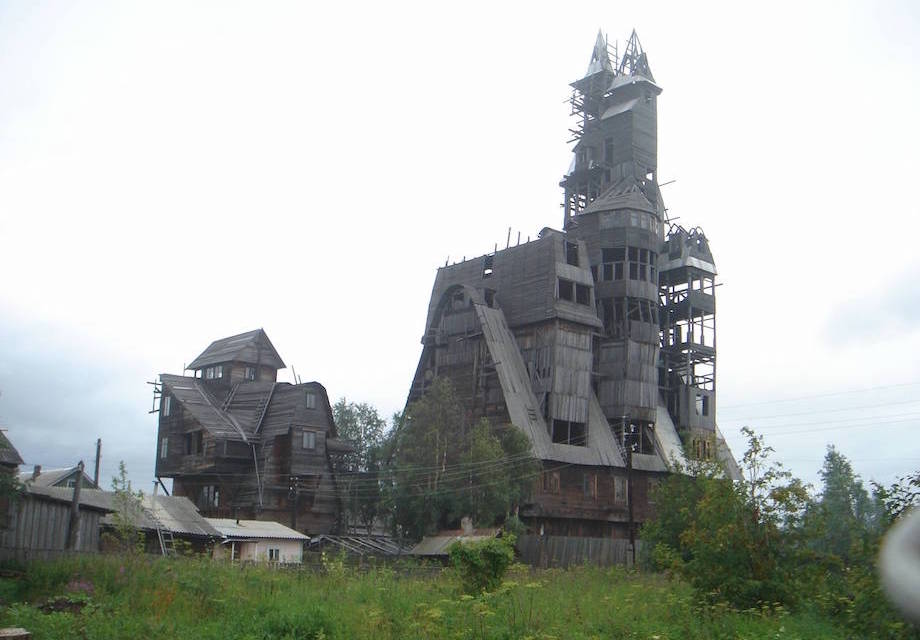 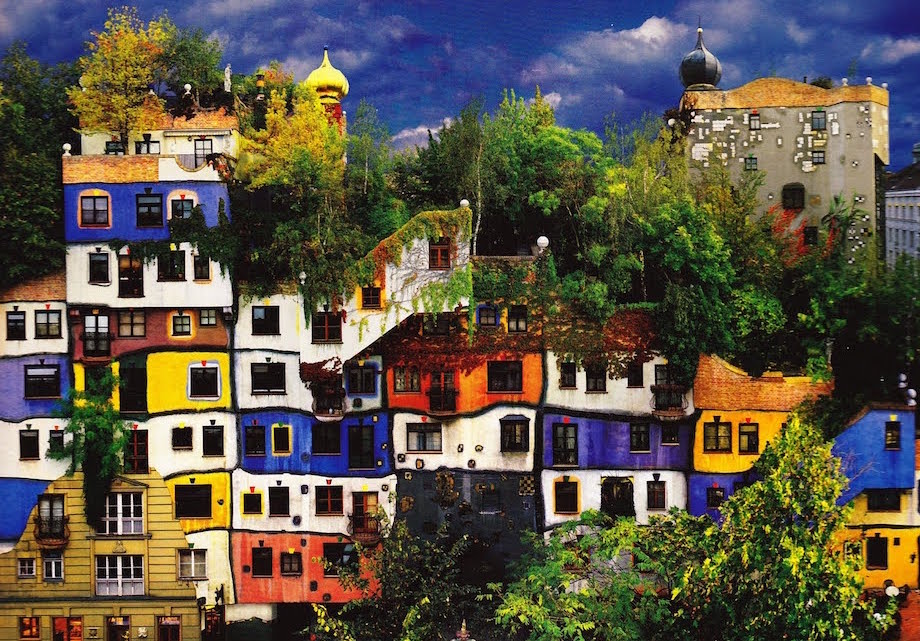 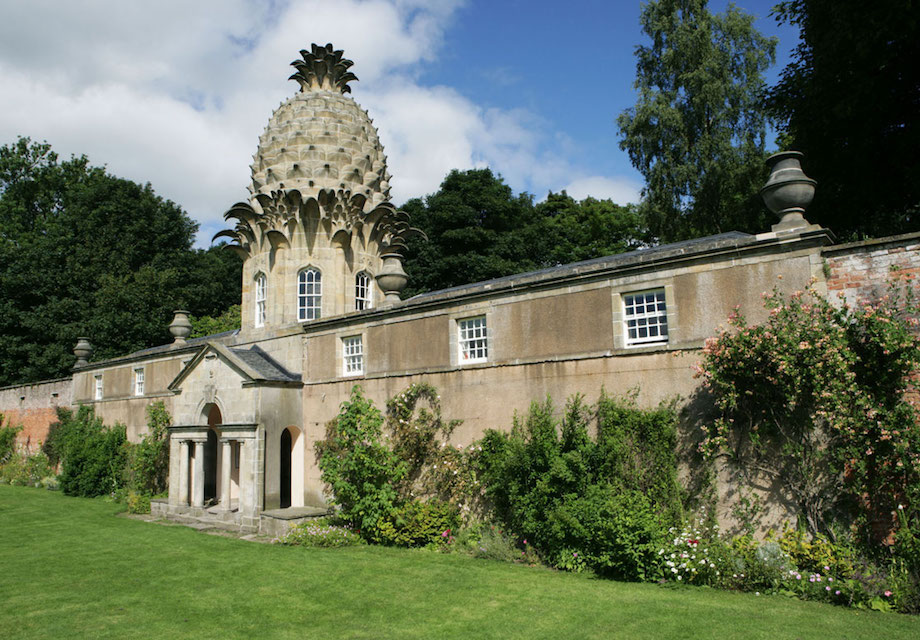 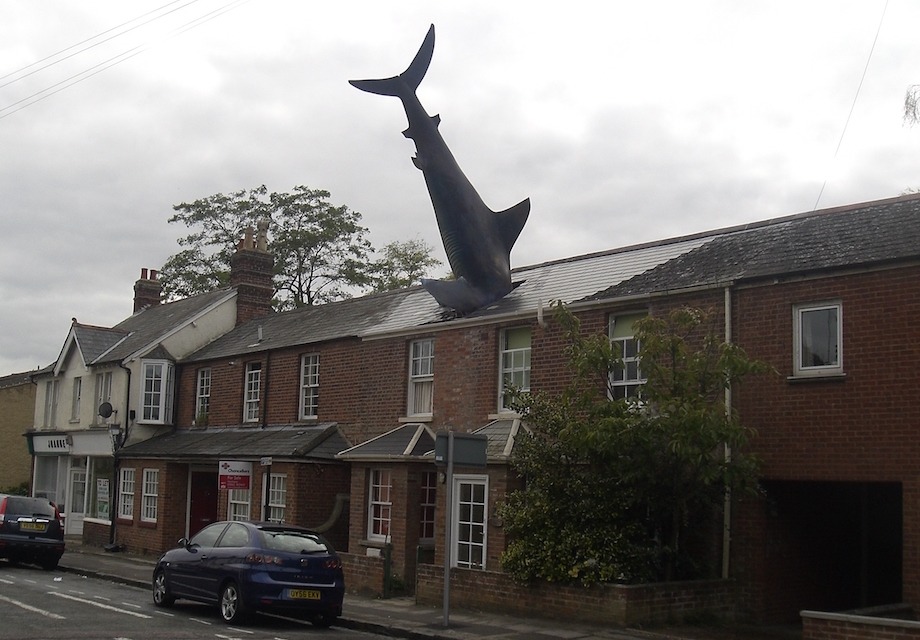 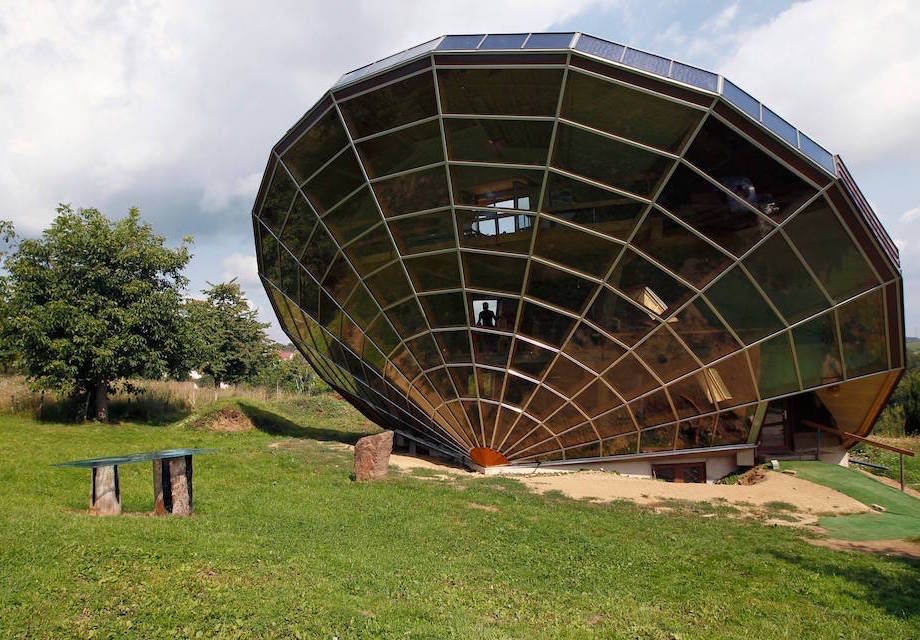