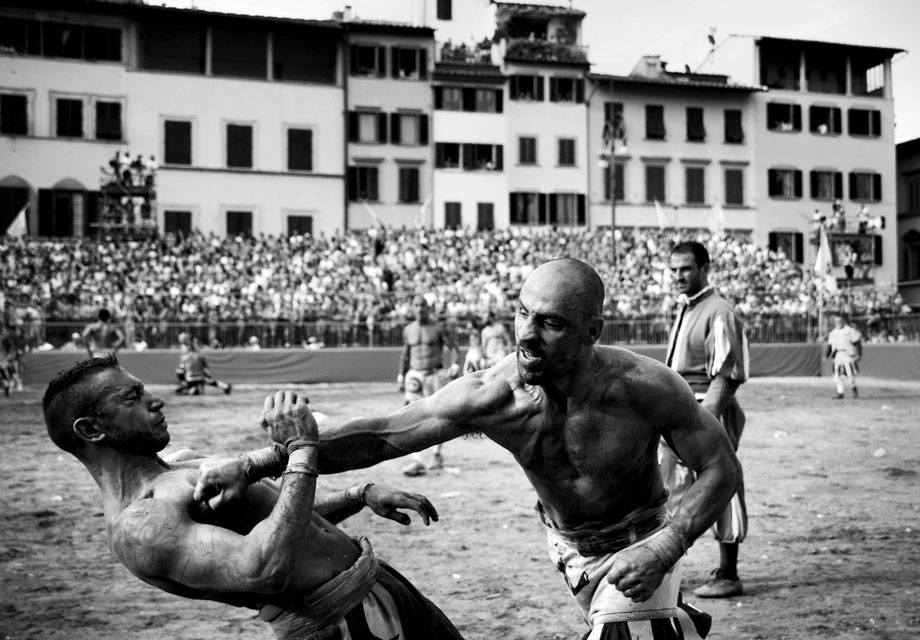 If you were asked to name the single toughest and most violent sport on Earth, what would you choose? MMA? Rugby? Bullfighting?

Try none of the above. Each of those is unquestionably harsh, but nothing compares to the straight-up savagery of Calcio Fiorentino. Part football, part rugby, part mixed martial arts, Calcio is a popular no-holds-barred game played in Florence, Italy.

It’s been called the most brutal sport in the world, and it’s a reputation well deserved.

“Head butting, punching, elbowing, and even choking are all fair play.”

A History Of Violence

Calcio Fiorentino has ancient roots. The Romans adapted a similar ball game from the Greeks in the first century BC, using it to train warriors for combat. That should give you some idea of just how ruthless it can get. When the French king Henry III witnessed a match in the 16th century, he’s said to have called it “too small to be a real war and too cruel to be a game.”

Official rules were first published in 1580 by Giovanni de’ Bardi, a Florentine count. At the time, only wealthy aristocrats and other notable figures were allowed to play. Even Popes reportedly got in on the action in Vatican City. Imagine a shirtless Francis bare-knuckle boxing an opponent on a field of sand (good luck getting that image out of your head).

Rules are few and far between for Calcio. Almost any kind of contact is legal, from punches to the face, to vicious body slams, to flinging sand in the eyes of the enemy. Head butting, punching, elbowing, and even choking are all fair play. Sucker punches and kicks to the head are the few forms of outlawed violence. Beyond that, players are encouraged to score and stop opponents by any means possible.

There Will Be Blood (Again)

Interest in Calcio began to wane in the early 17th century, but after a long hiatus, the barbarous free-for-all was revived in 1930. An annual tournament was established, with the final match played on June 24 each year to coincide with Florence’s yearly celebration of its patron saint, St. John the Baptist.

The grand finale and its two semifinals are played in the Piazza Santa Croce, in front of the imposing facade of the 15th century Basilica di Santa Croce. A team from each quartiere of the city is represented: Santa Croce (the Blues), Santa Maria Novella (the Reds), Santo Spirito (the Whites), and San Giovanni (the Greens).

A spectacular parade of musicians, flag throwers, and burly players – all dressed in Renaissance garb – kicks off the festivities. Slowly they make their way through the narrow cobblestone streets, lined with banners bearing the city’s red and white emblem, to Piazza Santa Croce. The players strut onto the field with pageantry in full force, accompanied by costumed foot soldiers and trumpets blaring. A fittingly macho cannon blast signals the start of the match.

“Matches end after 50 minutes of combat with plenty of spilled blood and a few unconscious participants.”

How does pandemonium become an organised sport? The answer is “barely.”

Matches last 50 minutes and are played on a sandy field, twice as long as it is wide, with goals at either end. Each team has 27 players who must score goals by kicking or throwing the ball through the designated goal areas. The game has no breaks, time outs, or substitutions. That’s pretty much where the rules end.

Calcio teams are made up of 4 Datori indietro (goalkeepers), 3 Datori innanzi (fullbacks), 5 Sconciatori (halfbacks), 15 Innanzi o Corridori (forwards). Players are free to kick, carry, or throw the ball in any direction they please. Kicks to the head and sucker punches are considered fouls, as is multiple players ganging up on a single player. When you consider that a hefty percentage of these guys come from boxing, wrestling, and MMA backgrounds, it’s no surprise things get ugly.

Then there’s this little catch: if a goal is missed, a half point is awarded to the opponent. That means teams are hell-bent on getting as close to the goal as possible before going for it, which in turn encourages even more violence. Local police had to step in to make the game less vicious, including barring convicted criminals and players who were considered too violent.

Matches end after 50 minutes of combat with plenty of spilled blood and a few unconscious participants. Winners take home a Chianina cow – a coveted breed used to make the local steak specialty, bistecca alla fiorentina – and bodies full of bruises.

Whether player or spectator, Calcio Fiorentino is not for the faint-hearted. If watching brawny Italian men pummel each other into pulp isn’t your thing, this isn’t your game.

If, on the other hand, that sounds like exactly the Florentine holiday you’ve been looking for, here’s how to make your (slightly disturbing) dreams come true.

Get your tickets early. A spectacle this special sells out in advance. Tickets can be purchased online starting in May, with prices ranging from €20 to €55 depending on the quality of the seats. For the disorganised, it’s sometimes possible to get standing-room-only tickets once you’re in town.

Florence’s Pertola International Airport (FLR) is just a few minutes from the heart of the city. The international airport at Pisa is about an hour away by rail. Many visitors arrive by train at Florence’s Santa Maria Novella station, a short walk from city centre. A variety of accommodations, from basic pensiones to five-star hotels in Renaissance palazzos, can be found in the area.

Come early to explore the Piazza Santa Croce before the battle begins. The basilica is the largest Franciscan church in the world, and inside you’ll find the tombs of Galileo, Michelangelo, and Machiavelli. Cheer on participants in the historic parade before the games. Celebrate the winners, and battered losers, with fireworks over the Arno river afterwards.

Bloodshed is the order of the day at the world’s most ferocious sporting event. Don’t try this one at home (but if you do, send us the video). 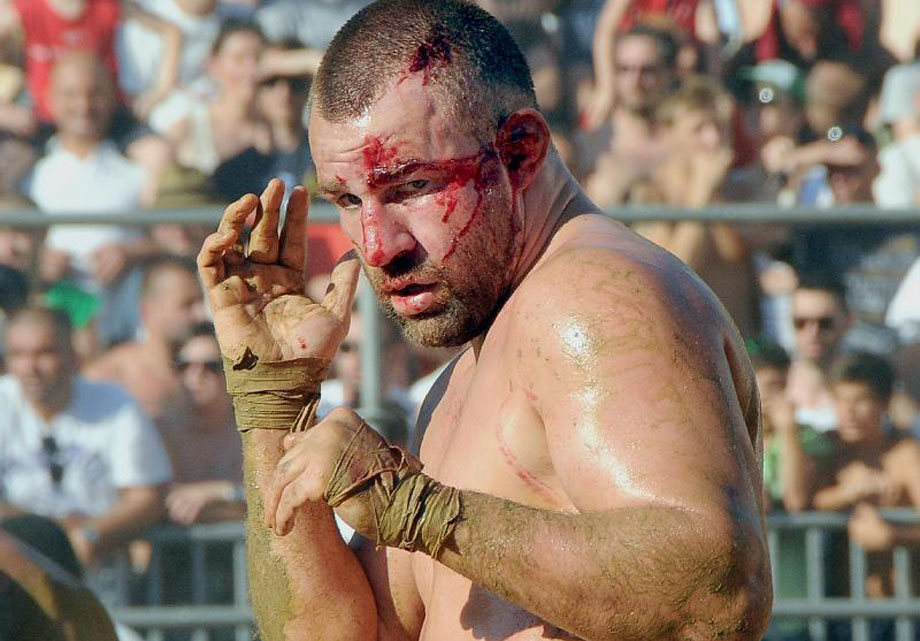 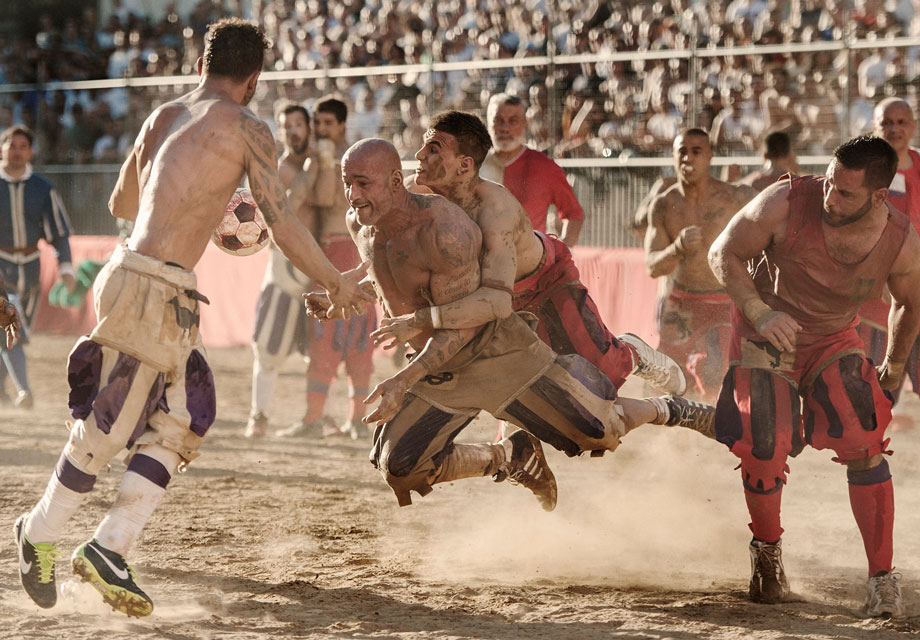 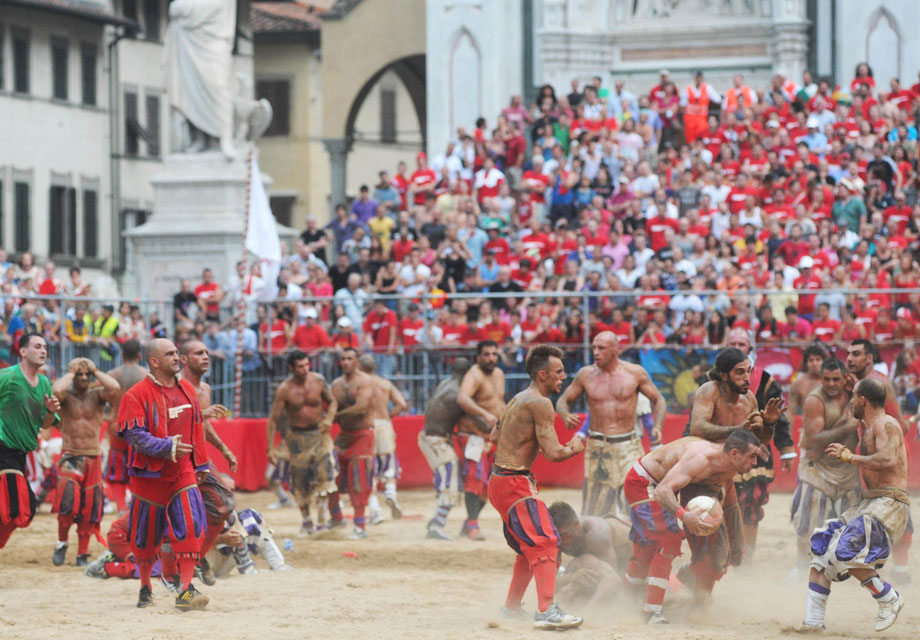 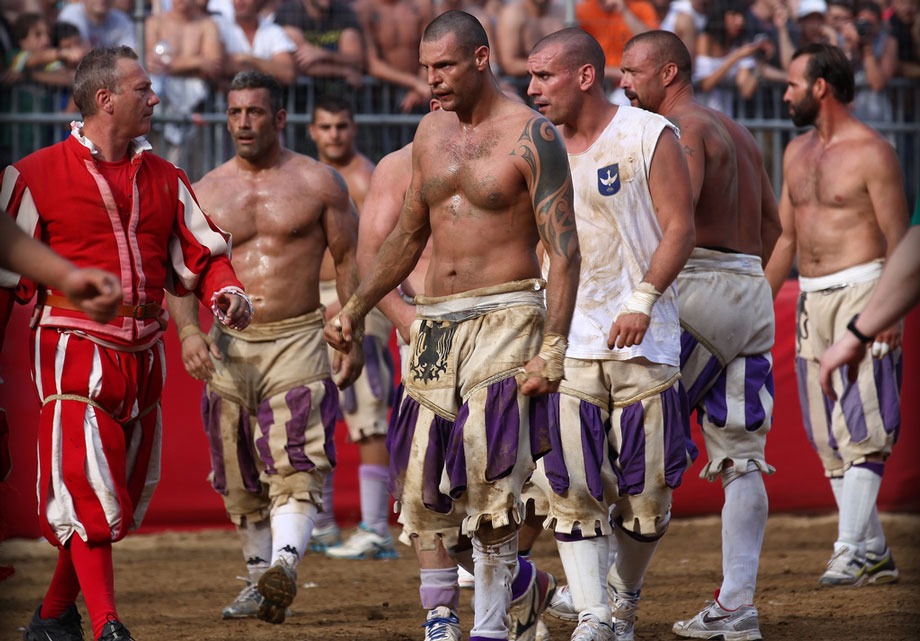 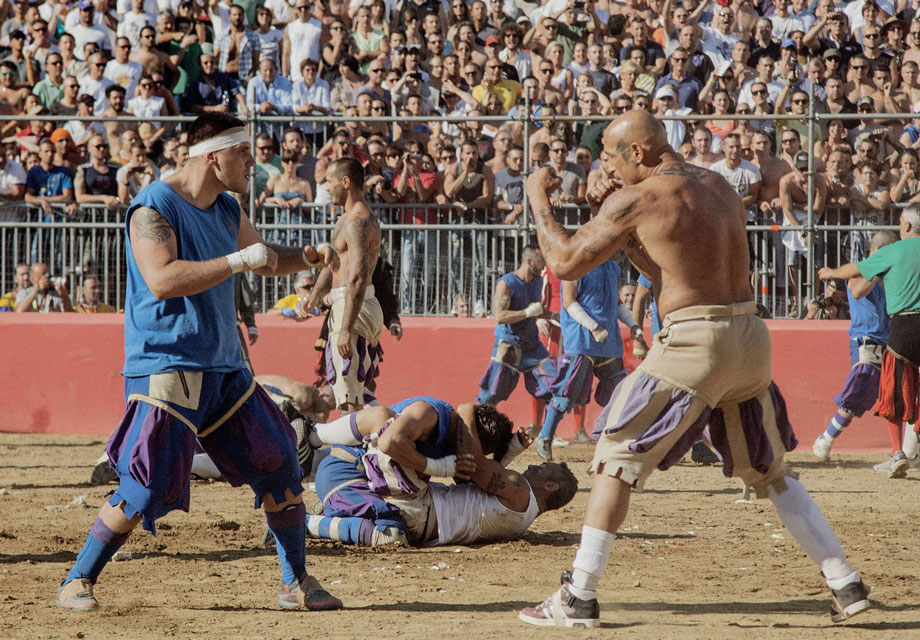 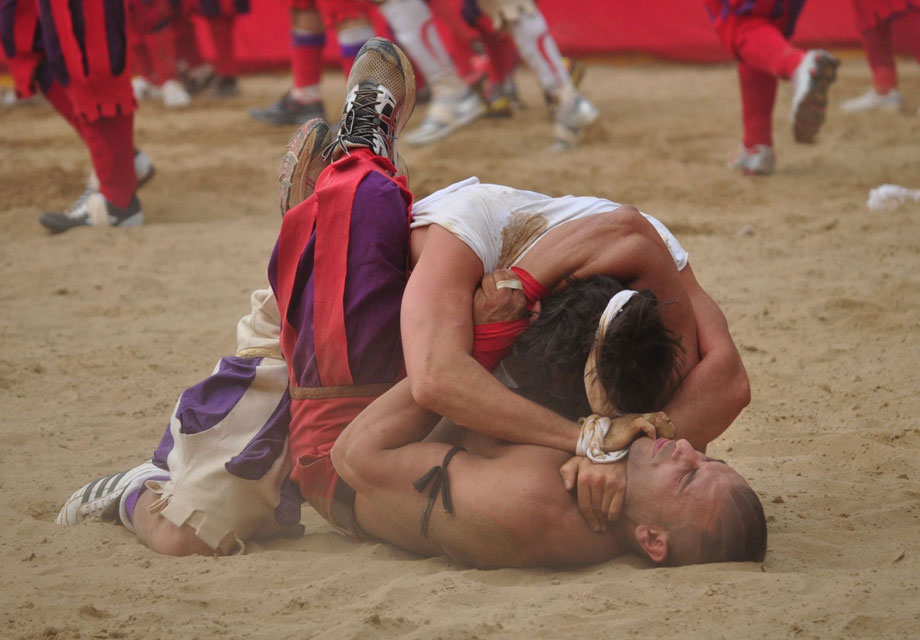 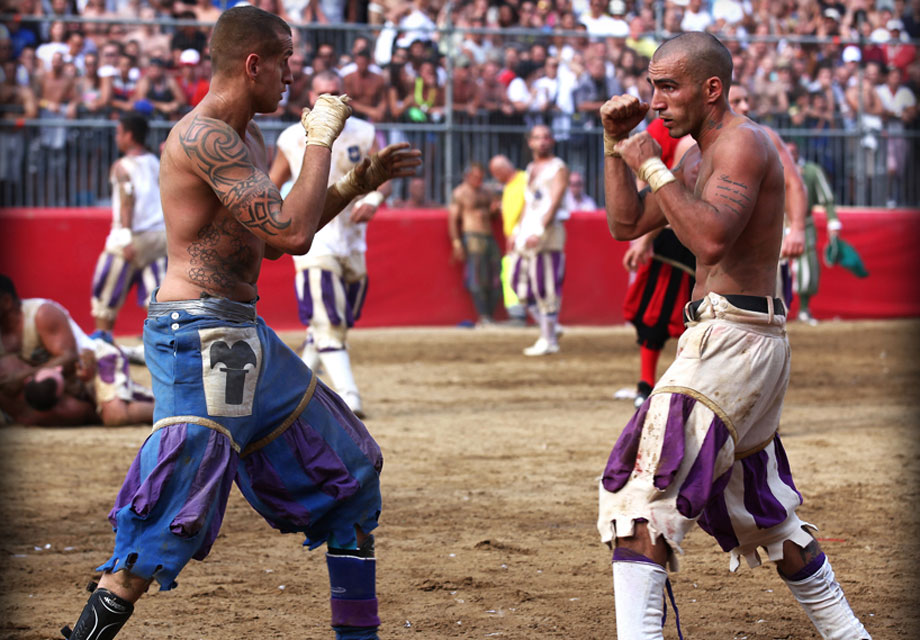 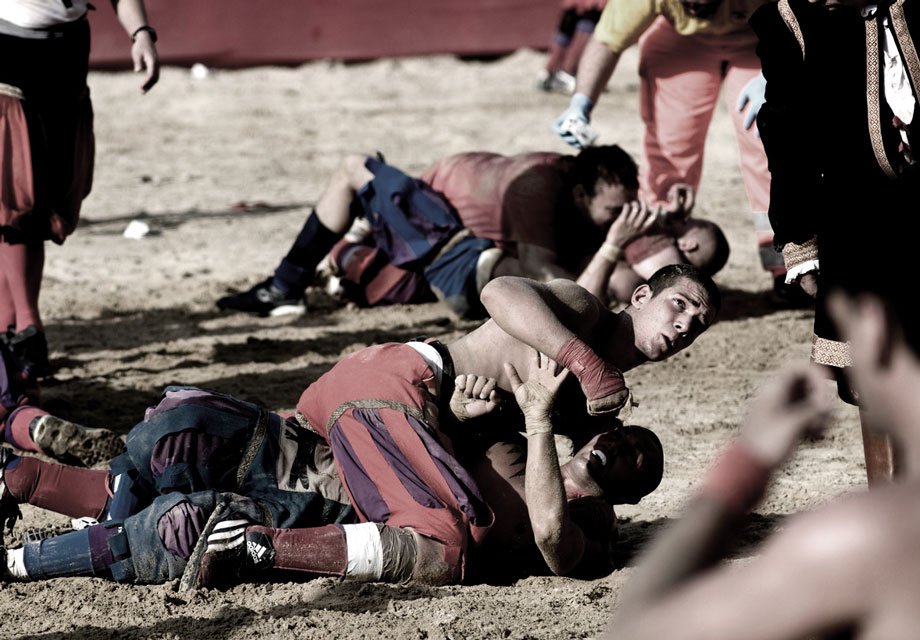 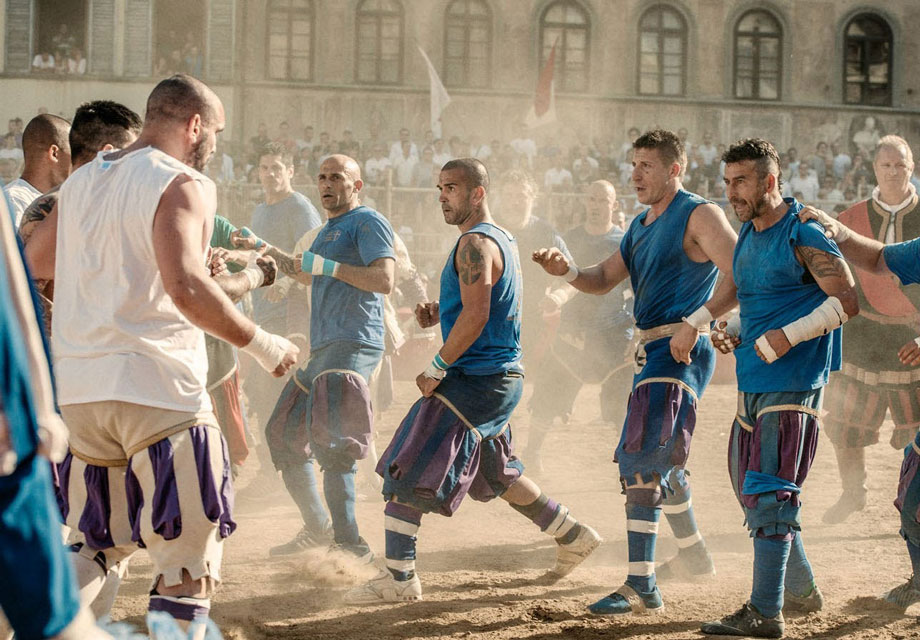 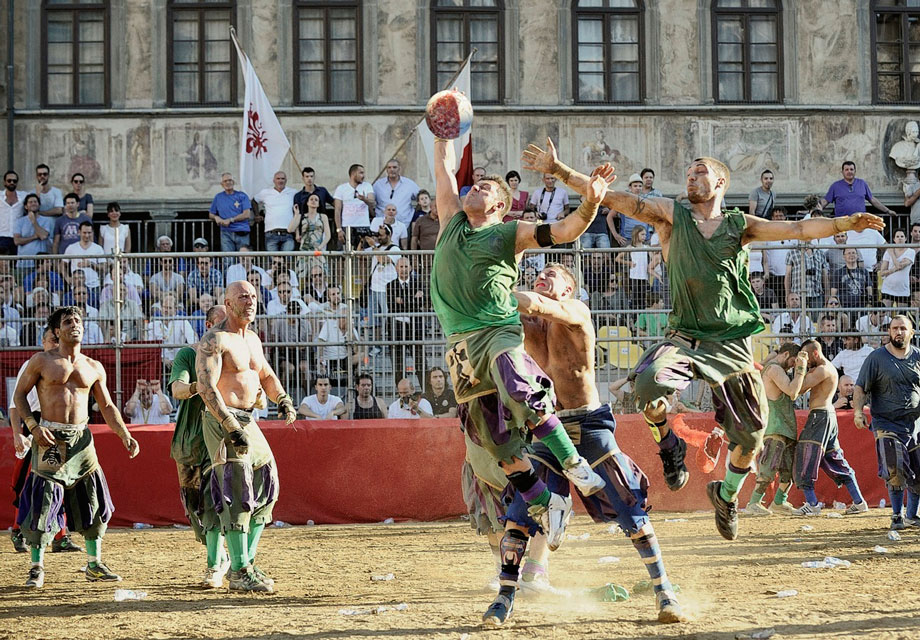 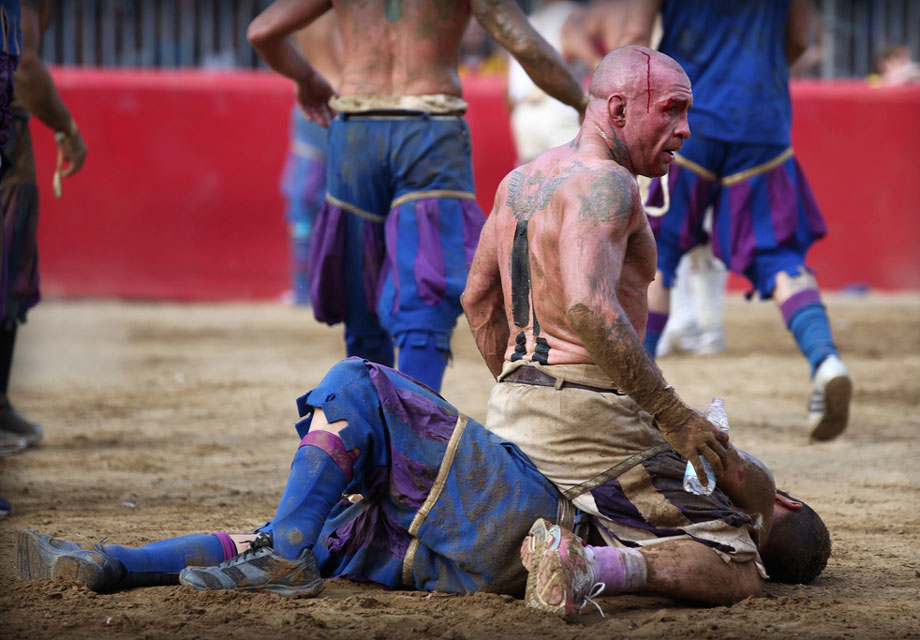 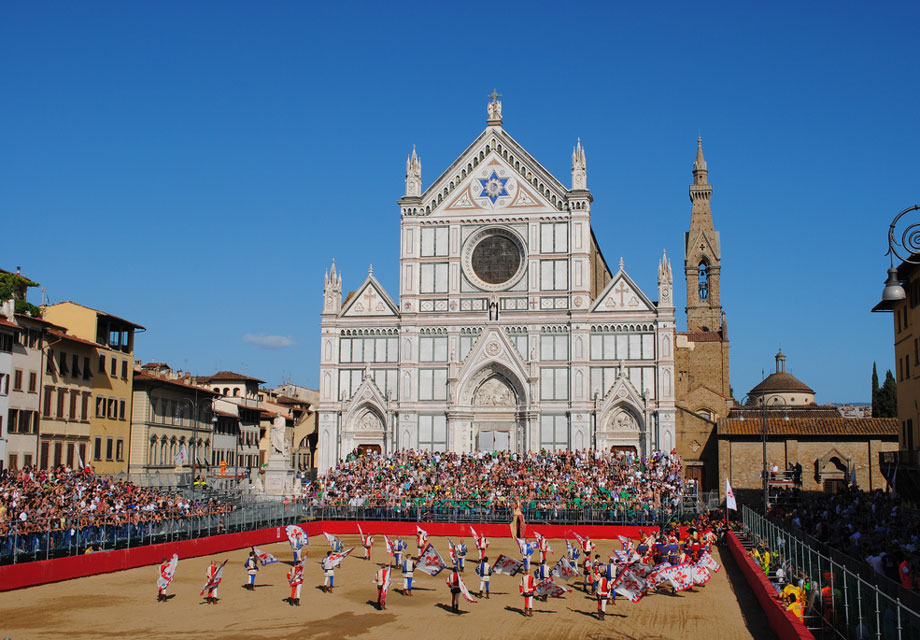 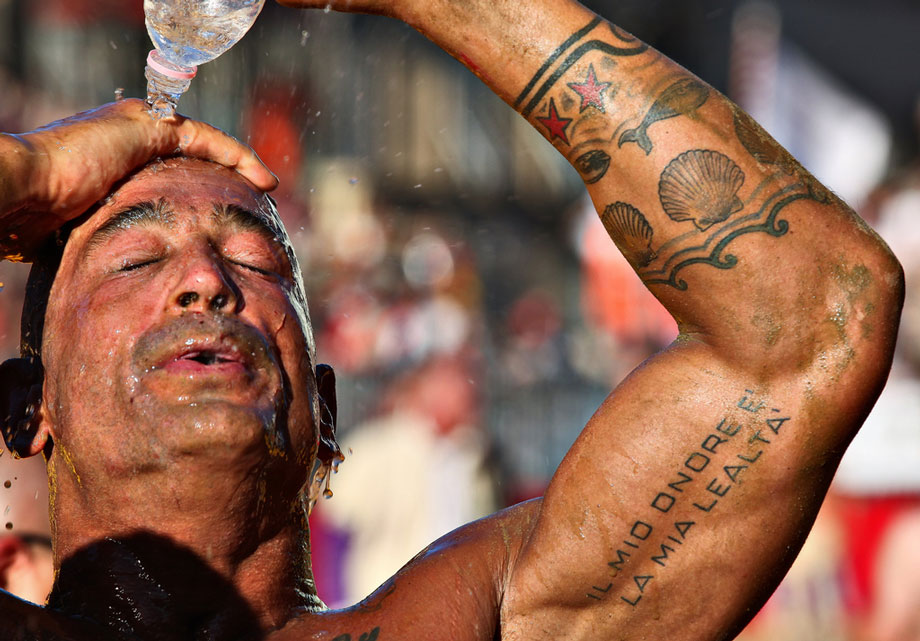