How To Get Tom Ford Style

Tom Ford was bringing ‘sexy back’ well before Justin Timberlake was even born.

In the late Seventies, Ford was a student of architecture by day and disco-style divo at Studio 54 in New York by night. Then, he moved to Milan to head up design for Gucci in the Eighties, where his sharp, sleek designs took the fashion house back from the brink of closure.

At the helm of his very own Tom Ford brand since 2004, the Texan is celebrated for his unapologetic sexiness -especially with men’s tailoring, and today he’s one of the most sought-after suit designers for the red carpet.

He’s dressed the best of them – Bradley Cooper, Ryan Gosling and Brad Pitt, parading his sharply tailored dinner jackets in plush velvets and perfect-fit mohair costumes that allow men to be a little out-of-box, without forsaking their masculinity. Tom Ford style inspiration? Himself, actually.

Breaking It Down – Tom Ford Style 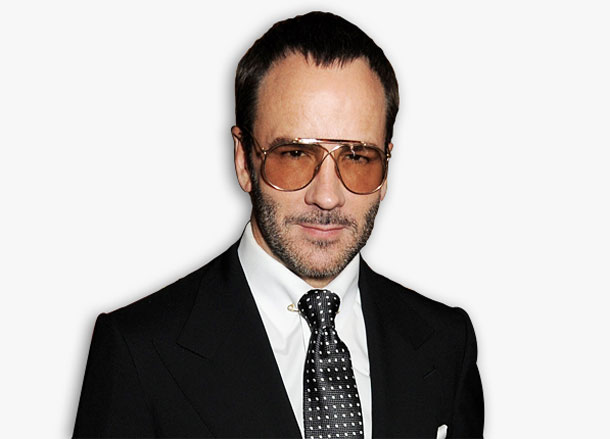 Tom Ford told CNBC in a recent interview: “I am the Tom Ford customer.” And he doesn’t do casual. Despite the odd snap of Ford scampering through an airport in jeans and a shirt, the designer is otherwise wearing a jacket; be it a blazer or complete suit.

Surrounding himself in luxury, his belief that men should think less about trends and more toward the classics, lends itself effortlessly to his other passion: looking good. As Tom Ford once famously put it: “We are living in a material world. So why not live with something beautiful?” 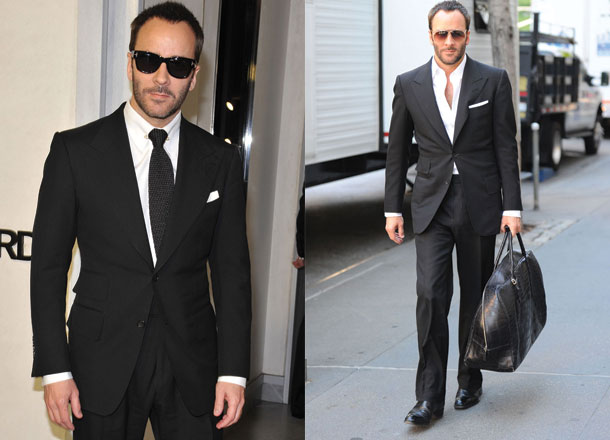 Dark suit, white shirt; these are the Tom Ford style uniform, if ever there were to be one. A sartorialist at heart, Ford looks like he is more of European descent than Texan blood, opting for crisp, cotton shirt (always white) and a black, single-breasted suit, dressed up a tad with sprawling peak lapels.

A white pocket square and silk necktie break away from looking like a waiter, especially when the shirt is left opened-up. Ford is a traditionalist for cut, so ensure the jacket sits squarely on the shoulders and covers the butt. The trouser needs a fitted waist and longer leg break – nothing cropped. 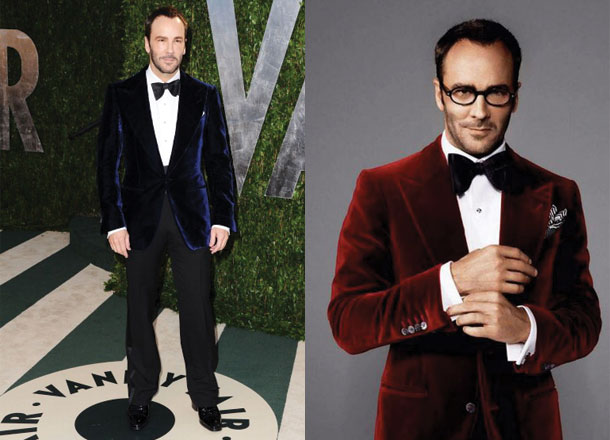 When he wants to step up the style, Ford doesn’t looks to the red carpet actors he gets paid to dress. The luxury softness of velvet and it striking brilliance under lights and camera, make it a go-to fabric for the Ford tuxedo.

A man well-versed in disco glam, unlikely materials like velvet lose any sort of preconceived tackiness, when worn so finitely by Ford. Working the plush into classic dinner jackets, best in midnight blue or cherry red, the novelty fabric becomes expensive, bringing out the sheen of patent leather shoes. When Ford wants to remind those of his wilder fashion days, he can. 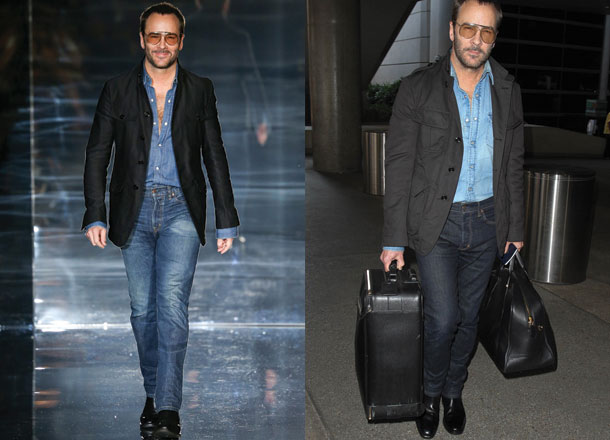 Ford’s penchant for denim shows there remains a little bit rancher in the designer. And he even rocks the difficult combination, double denim. At the end of one of his shows, Ford herds the runway in vintage wash jeans and chambray shirt, based with a pair of sturdy-heeled chelsea boots.

Ford’s token airport look is similar, this time in raw denim under a much lighter, western shirt. As Ford demonstrates, the look works better without a belt, which would cut his shorter frame in half. Layer both looks with a unstructured blazer or car jacket – in black. 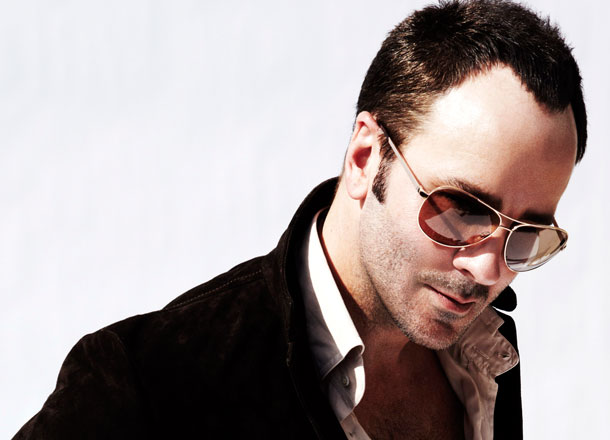 For 53-year-old Ford, the glory days were the late Seventies. Ford brings the essential kitsch from the disco-decade – before everything went corporately suited in the Eighties – and updates the anything cringe, working key suede jackets and very-open shirts, into a modernised retro.

Metallic or black framed aviators with musty orange lenses cement the vintage vibe. But, as Ford rightly displays, there isn’t a hint of flare-jeans, or collars-over-lapels in this designer’s Seventies reimagining.

Dinner jackets in velvet are Tom Ford, while Haider Hackermann and Topman offer the coat in a rich navy blue. Peak lapel suits are Gucci-inspired or something else fashionably black from Huntsman or Paul Smith.

Suede bombers are provided Club Monaco, Brioni or Burberry, while Ford’s car jacket can be sourced from Hackett.

Incotex offer luxury vintage wash jeans. As do J.Crew for the raw denim – both are more ‘Ford’ for their tapering – just like pants.

Black leather Chelsea boots from R.M. Williams are very rancher when Ford returns home to Texas. For a more elegant option look to Adieu or Lanvin. Dress shoes are his very own Tom Ford stylish loafers in burnished brown.

Silk scarves, like the one from Saint Laurent, are essential neckwear when going tie-less. Crocodile skinned luggage or carryall is a win from Dior. And Dries Van Noten have a orange-hued aviator perfect for a retro shade. For black frames, stick to the man himself – Tom Ford eyewear. Touché.