What makes a good beach bar? The breezes are warm. The drinks are cold. The crowd is hot.

Bonus points for sleek pools, sunset views and chic white loungers. The best beach bars Europe have it all and then some. You may be at sea level, but partying at any of these establishments is the high life. 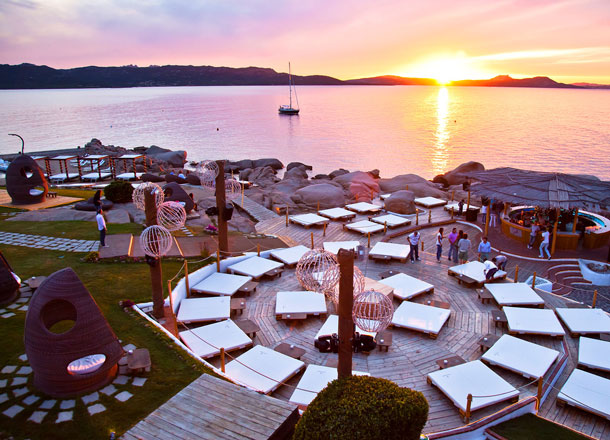 Phi Beach opened its doors in 2005 and has been a Sardinia hot spot ever since. The open-air club and outdoor bar are located near the 18th century naval fortress of Forte Cappellini, nestled between granite rock formations and a sea filled with superyachts. By day Phi Beach is lively beach club for the neighbouring hotel guests and 20-something locals. By night, the space transforms into a sexy showcase of international DJs. 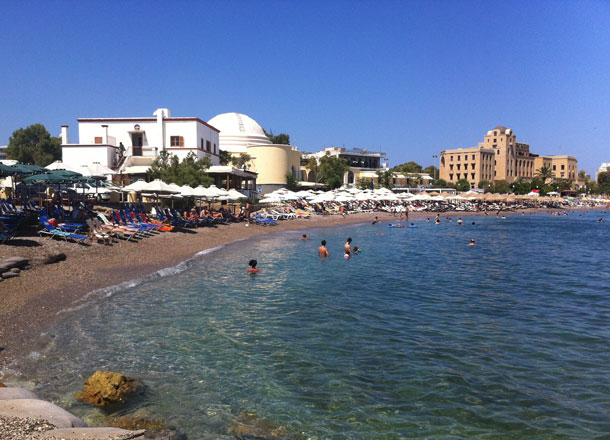 Come to Sundance for unspoilt nature and the largest beach parties held anywhere on the Greek island of Rhodes. Live percussionists, beach volleyball, fashion shows, food and guest DJs are on hand, particularly during the legendary Sunday parties. This is the place to be if dancing barefoot around a campfire as the sun goes down is your idea of a good evening out. 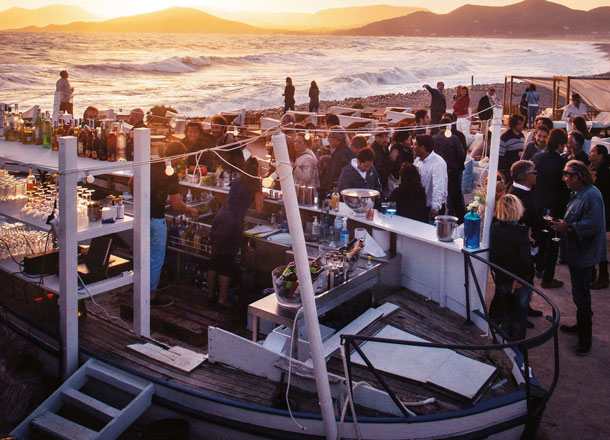 The collective behind the renowned Experimental Cocktail Club in London, Paris and New York takes on Ibiza with Experimental Beach. Chic, stylish and seriously cool, Experimental Beach is pleasing to both the eyes and palate. The food is locally sourced.The cocktails are exquisitly crafted. The bohemian vibe calls back to the hippy Ibiza of the 1960s. Need a break from the party? Experimental Beach also offers yoga classes. 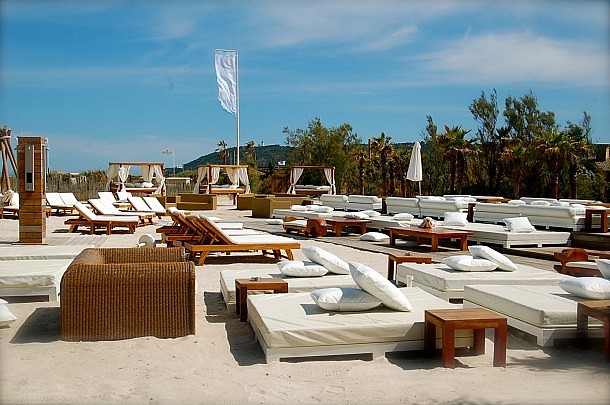 We can’t discuss beach bars without mentioning Nikki Beach. Since its debut in 2002, Nikki Beach St. Tropez has become a go-to getaway for celebrities and jetsetters. No one comes here to sit on the sidelines. Nikki Beach is for those who want to be seen (preferably while dancing on a table and/or spraying a bottle of champagne). For late afternoon baking and early evening boozing, this is a perennial top spot. 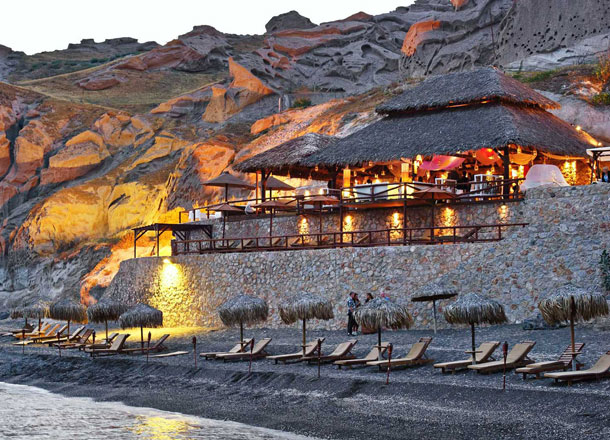 Theros Wave Bar is an all-day destination during summer in Santorini. With the volcanic cliffs of Vlychada on one side and the endless horizon on the other, you can’t go wrong any way you turn (especially if you have one of the bar’s famous cocktails in your hand). Unlike many of the entries on this list, Theros Wave Bar is less about raging all-nighters and more about the exotic, the elegant and the romantic. Making it on our list of one of the best beach bars Europe. 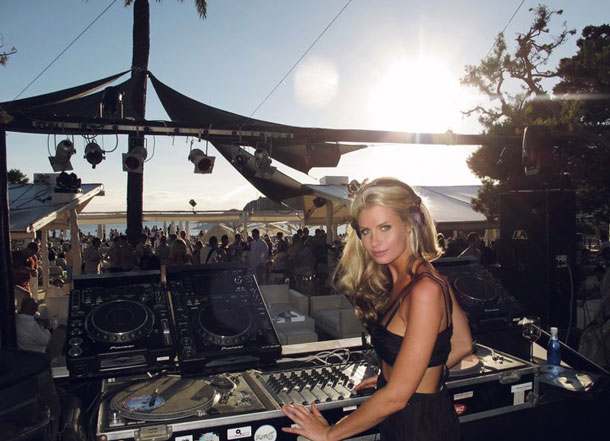 Welcome to one of the most luxurious beach clubs on an island known for luxurious beach clubs. Blue Marlin pulls out all the stops, rightfully earning its rep as one of the coolest seaside watering holes in the world. The famous faces who have visited include Prince William and Leonardo DiCaprio, but you don’t need an A-list name to get A-list service. Blue Marlin offers anyone an opportunity to indulge their VIP aspirations. 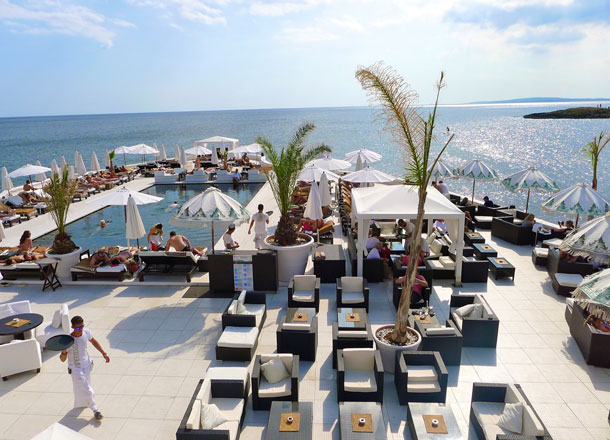 Purobeach is everything you could possibly want from a beach club. The palm trees, the lounge chairs, the billowing fabrics, the turquoise waters – they’re all there, and even more beautiful than you expected them to be. As evening arrives Purobeach visitors are treated to a kaleidoscopic sunset (get ready to snap a few shots for Instagram), followed by food, music, wine and fellow revelers. 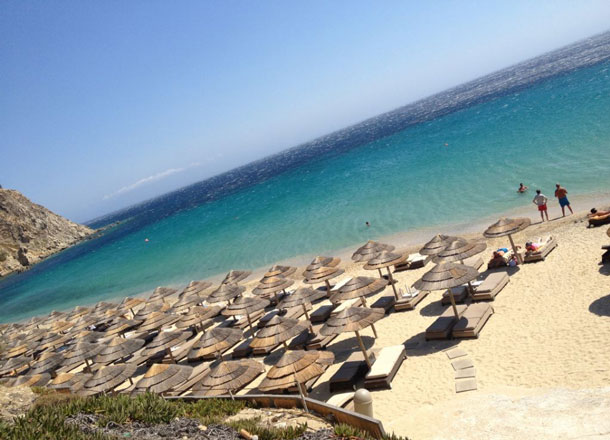 Celebs, models, royalty – all the usual suspects turn up at Nammos when it’s time to party on Greece’s famously decadent island. Champers showers and table dancing are to be expected, but in addition to its reputation on the Mykonos nightlife scene, Nammos is also known as one of the island’s hottest restaurants. Don’t miss the food if you don’t have to. Try lunch if dinner is too bustling for your digestion to handle. 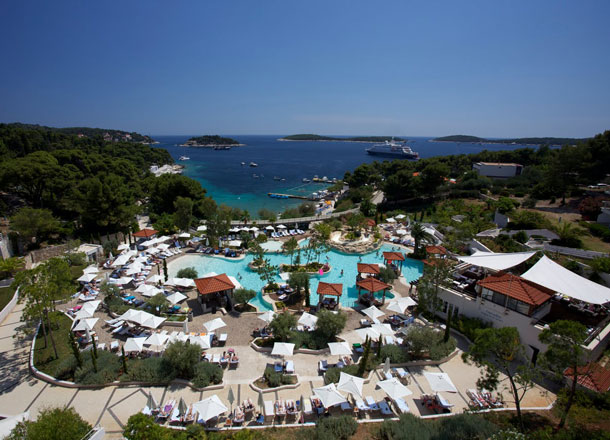 Hvar’s best beach dance floor is the alliterative Hula Hula Hvar. After a day spent relaxing on the sunbeds, it’s time to turn down the lights and turn up the volume. Hula Hula Hvar comes alive during its après-beach party, which starts at 4pm and carries on until sundown. This slice of paradise involves rocky coastline, breathtaking sunsets, and house music, making it one of the best beach bars Europe. 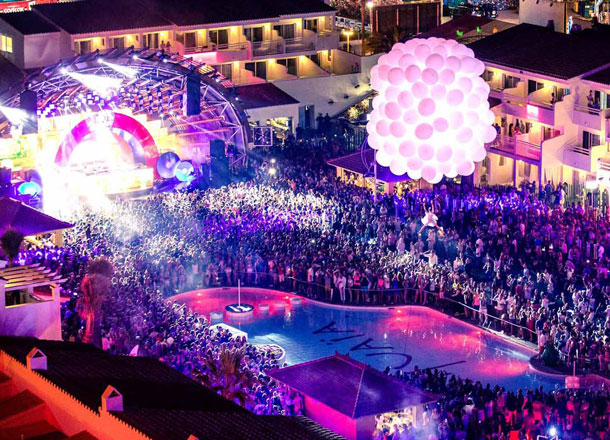 From the weather to the women and everything in between, it does not get hotter than Ushuaia. The Playa d’en Bossa hotel is exactly what Ibiza is all about. It isn’t cheap, but it offers the world’s top DJs, an achingly trendy pool party scene, a beauitiful crowd and many years of bragging rights. Boredom is not an option, but almost anything else your hedonistic mind can dream up is.