How To Get Colin Farrell’s Style

One of Ireland’s biggest exports, Colin Farrell is an actor of funny-guy antics and renegade villainy; depending on if you’re talking about In Bruges or Minority Report.

But the actor doesn’t play the fool when portraying his personal style, nor is he a typical bad-guy. He sticks to the rules when it matters most, while for the most part messing things up in such a way that his disrespect for colour, pattern and even the common trouser don’t seem to matter. He’s got other things going on.

Anti-colour, pro-muted sums up the shadiness of Colin Farrell in a phrase. But a lack of colour means the actor plays around with the simple and puts them artistically together: the tuck of the shirt, the length of a jean, the fit of the jacket – offering stylish nuances that fellow fashionofiles pick up on.

An actor, Farrell likes to take on roles in the wardrobe too; changing from an off-duty muso by day into a sleek, suited and booted king pin au soir. So, let’s take a look at the key fashion moves to get Colin Farrell’s style. 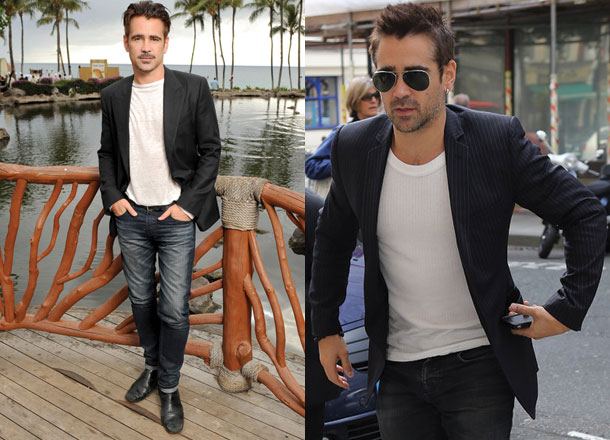 Whether he’s attending a film festival or running errands in New York, Farrell finds a dapper way to wear his favourite plain tee. The trick? Keep in white, ribbed and fitted.

It’s what your grandfather would’ve worn but under a fitted blazer with close-drawn pinstripes in thin white, the shirt is much more than a plain shirt. It’s there to host effortlessly the smart casual jacket.

Rolling the denim cuffs styles-up the denim/blazer/tee and when wearing a belt, a loose shirt tuck to expose the leather adds more game to Farrell’s go-to Chelsea boots in black, complementary the two pieces nicely. 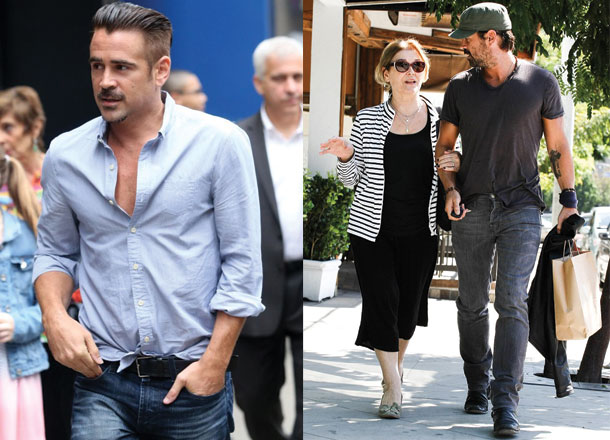 To tuck-or-not-to-tuck is never a question for Farrell. It’s a complete ignoring of the rules. The actor opts for the half-tuck – that is, a nonchalant semi-shoving of his top shirt into his jeans.

Farrell takes a charcoal, thin cotton tee and tucks it at the front, no belt – using the metallic of the jean button to create a focal point. Grey jeans and black biker boots complement the leather cuff and beads. The hat is a little random but works for the actor – concealing an unkempt hairdo, perhaps, for lazy Sundays/

The the half-tuck really only works with denim, and needs a follow through with long sleeves; rolling them just as carelessly so to emulate the ‘this just happened’ tuck of the shirt. Though don’t be fooled, it probably took a good ten minutes to perfect. 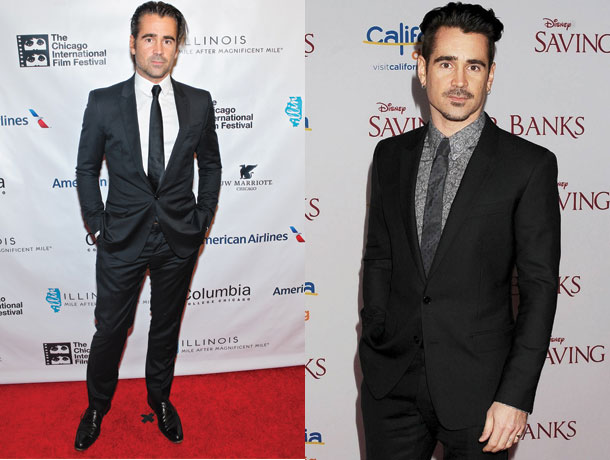 Like his coffee, Farrell like his suits sharp and black. The modern two-piece in matte is decorated a touch with a grey button-up shirt and silvery rose print; the marble jacquard affect of the floral given a stronger grounding by cement grey tie.

The subtle sheen of mohair wool gives Farrell’s other go-to suit, midnight blue, a luminous quality that lights up at the flash of a red carpet camera. Fit is everything for the actor, which he traditionally bases with sheeny leather, black lace-ups. Nothing but the original and the best.

If acting is Farrell’s one true love, music would have to be his mistress. And he likes oiled, imperfectly sexy type – judging by his rocked-out get up. Without question it’s black-on-black; from the tapered ankle straight-fit to the more relaxed denim that covers the shaft of the boot to heal – the top half sings in colour tune too, be it a sweater or black jacket.

Adding metal to the genre is easy with silver neck chains that complement the hardware of a furry-collared, plaid-line leather biker. Other times, the headgear takes the lead, ranging from a felt fedora to a slouch beanie – depending on the weather. What stands is the quality of Farrell’s gear: the cashmere sweater, those calfskin boots and the razor fit of his jacket. He’s reinventing the off-stage rocker – as a stylish guy would.