Growing up in the Scottish town of Paisley (yes, as in the floral print), Gerard Butler was raised in style, literally.

With a home in Malibu and New York, the Scotsman remains true to his rugged heritage which – despite the glitz and glamour of Hollywood – translates into a contemporary masculinity that most celebs are ditching for contrived versions of themselves.

Known for his hulking lead roles in ‘Olympus Has Fallen’ and the upcoming sequel ‘London Has Fallen’, Butler is also the face of Hugo Boss’ ‘Boss Bottled!’, stealing the role from Ryan Reynolds.

Like a breath of fresh air (or recently sprayed cologne), Butler shows us how to dress like a man (who’s not obsessed with being fashionable), and surprisingly, that doesn’t require being indifferent. 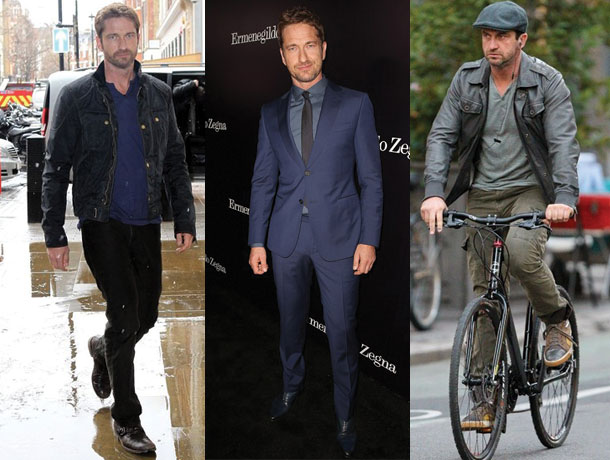 With a ‘300’-movie, gym junkie bod, the actor has a penchant for dressing-up in hard, fast suits, but only when the occasion requires it. Other times, you’ll see him in sneakers, clean cut jeans and a tee – mostly the open-necked Henley.

The Scotsman relishes in being classic, isn’t a fan of trends and keeps things relatively simple – no appendages. But he does love a good accessory and is rarely seen without his aviators and some form of hat; that LA sun proving all too hot for his British complexion. 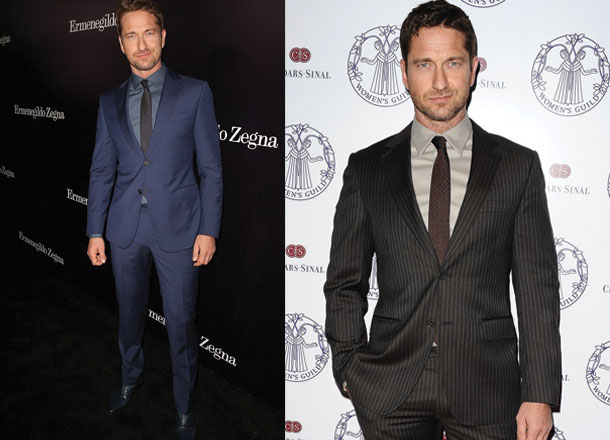 Like a boss, Butler looks to sharp tailoring (for those red carpet times) opting for sleek, and neat single-breast suits in slim fits. It leans the buff actor out, especially the fine pinstripe variety, which also plays down the mud-ish qualities of the brown.

But note the tonal chemistry of both tailored outfits: the blending of the dominant hue – be it blue or brown, as the colour morphs onto the tab-collared shirting (great for narrowing the face), the woven silk tie, and even onto the leather lace-ups. Butler doesn’t often waver from traditionalism but he makes an exception for blue leather shoes. 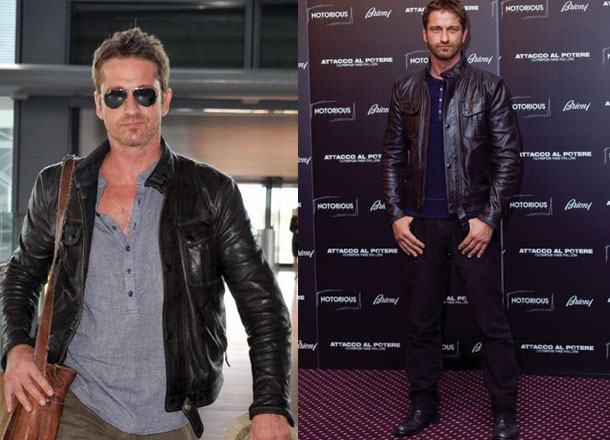 The combination of a leather moto jacket and a henley was made cool by Steve McQueen, and it’s a no-brainer for the classical Butler. Super masculine, the actor teams the soft, silk-cotton blend henley without heavy-duty cotton pants and derby boots in solid black – creating a look that feels aprés bike race – without the chase.

But the key piece is the leather jacket. Butler favours the worn-in, test-driven vintage aesthetic with the softness of the calfskin acting as a second skin (without it being super tight).The style is moto or racer style to be exact, but Butler does like the aviator style too, opting for tan-ish brown – something high-flyer Biggles would’ve be proud of. 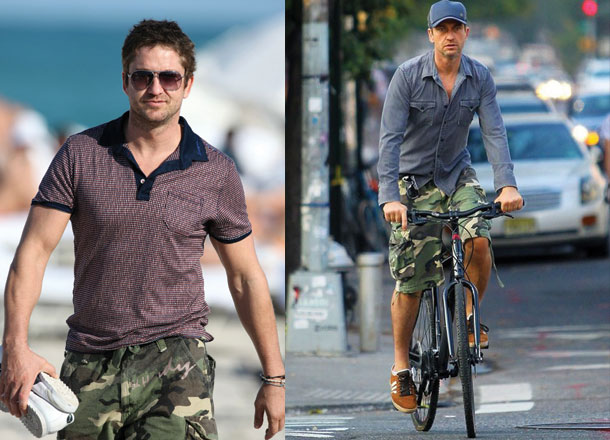 Whether he’s strolling the dunes of Malibu or dodging heavy traffic on Sunset Boulevard, Butler recruits his loyal camouflage shorts. Comfortable in cotton, the military print is as far as the actor goes in regards to statement prints; reserving the army material for his most casual looks.

A Sixties polo in contrast-collar detail and chilled bracelets style up the easy-go beach shorts, while in town Butler looks a touch more urban, with trucker cap and metallic grey Chambray shirt – untucked and loose-ish for supreme bike manoeuvrability. And, Butler won’t go down without his trusted Stan Smiths, adding a bit of youthful spark to his let’s-win-this-war weekend. 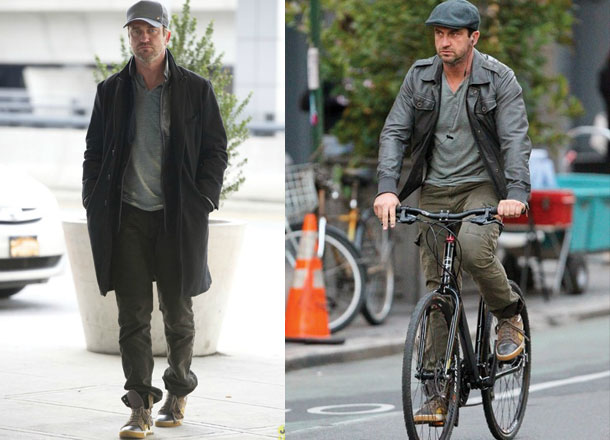 Butler wouldn’t be Scottish without some heritage-inspired looks riding on through the LA streets. To begin, a Chesterfield top coat is an aristocratic classic, worn in a relaxed wool-cotton fabric with a rather urban, skate combination of slouchie chinos, a loose tee and cap.

The northern chap comes out with a flap cap, wax-coated jacket and cuffed, hunter pants in olive green; the muted hues signifying the bleakness of a Scottish winter. Both outfits are based-out with high-top trainers, which are lovingly worn in – and tied up in a my-way, nonchalance that is a touch Kanye, without the velvet. Sing your own tune, Gerard.