How To Get Jake Gyllenhaal’s Style

Jake Gyllenhaal is easily one of the best-dressed actors in 2015.

Like his career – taking up roles in ‘Jarhead’, ‘Prisoners’ and his latest film ‘Southpaw’ – Gyllenhaal’s style is well-thought out, classic and louche. While he’s rarely ‘proper’ – rocking casual gear at the best of times, his relaxed style has clear, refined sentiments – helped out by incredibly groomed hair. Now let’s steal it all. 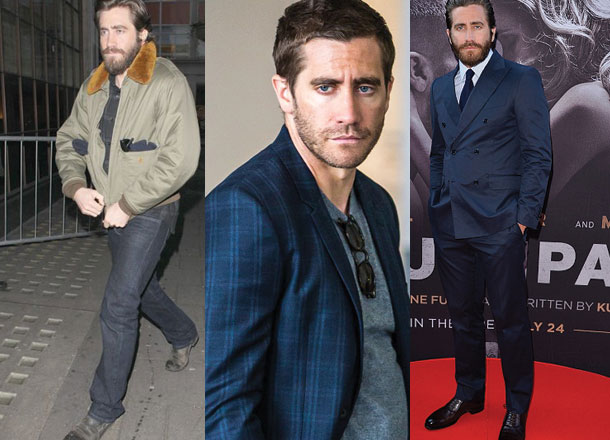 Snubbing skinny jeans, Gyllenhaal isn’t one for fast-paced trends (or ‘tight’ things). While he’s a style contemporary wearing urban, casual jackets and hi-top sneakers (with the odd silver chain) thrown in, the actor is far more in-tune with vintage-inspired American pieces – classics reworked such as the denim jacket, fleece-collared bomber and mid-blue jeans – always in a comfort fit.

But strong tailoring (undercut by a new hair do) has increased his style presence at film events; finding Gyllenhaal on many a best-dressed list this year alone. Classic and simple pieces work well for the red-hot actor, but the details – shoes, tie and great hair – when put to the test, see him go another level. 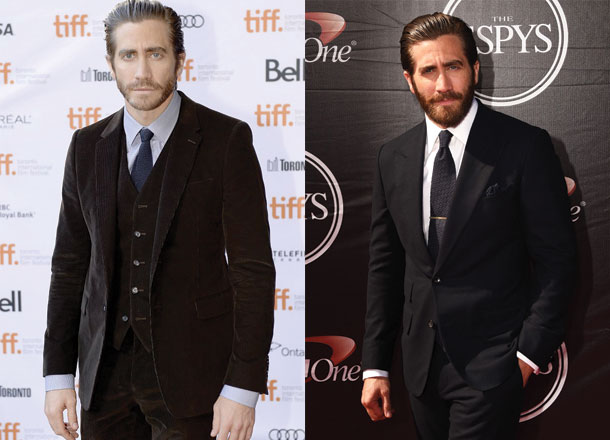 With a slicked-back hair cut, only a suit will do. And Gyllenhaal keeps the tailoring super sharp rarely steering away from black or midnight blue. A formal three-piece takes up a continental education with the new European cut and dark cocoa colouring. Looking ready for an Italian cafe espresso on the terrace, Gyllenhaal adds a sense of school-boy charm with a navy tie and ice-blue shirting.

Other times, Gyllenhaal – beard slightly grown out – simplifies the suit with a two-piece super wool. Then, he adds a textural pocket square and matching black tie – woven silk, always. A gold tie clip adds sentimental value, out-played by another subtle detail – the forward point collar, which is as striking as it is ‘barely-there’. 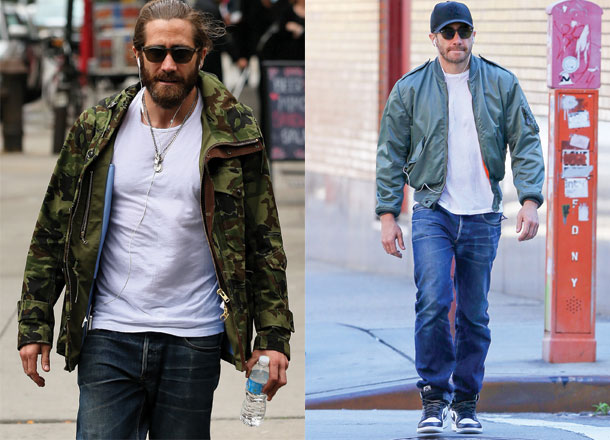 Gyllenhaal likes to march with an urban army look for an off-duty outfit recruited specifically for the New York City pavements. There is a certain youthfulness to the actor’s casual dress; donning a heavy, camo parka with a hood, a white tee and silver neck chain.

Other times, Gyllenhaal swaps the military-print for an army green bomber, but keeps the relaxed-fit jeans in mid-blue, as well as the white tee and leather hi-tops. The accessory change involves the headgear – chucking on a cap to accompany the active bomber. But, his token dark-framed sunnies stay habitually the same. 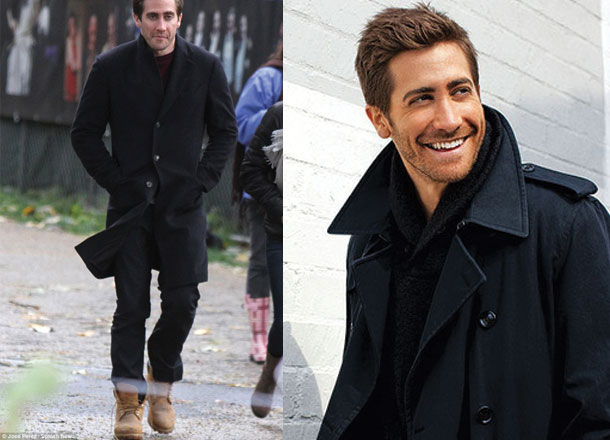 Showing his serious side, Gyllenhaal sports tailored top coats in sombre hues in the cooler months. It’s a chic, sleek side that stems from the actor’s penchant for true classics. The chesterfield coat is a staple, worn buttoned and collar slightly popped, which is hardly noticeable due to the slimness of the lapel. Teamed with wide-legged chinos and loosely-tied hiking boots, the traditional coats gets a rugged edge, matching the casual feel of the maroon tee peeking from underneath.

Other times, the collar pops with the working of another outerwear classic – the trench. Unbutton-ed, the jacket collar flares as a framing for a funnel-neck sweater; worn layered in the trans-seasonal months. Black-on-black creates a dressier appearance, but the contrast in fabric – cotton in the jacket and wool in the sweater – takes away an sense of heaviness. 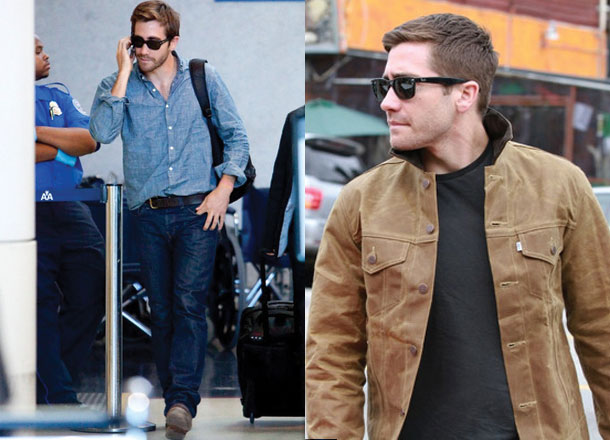 Gyllenhaal – being Californian – channels a casual Americana aesthetic that is based around denim. The cotton fabric comes waxed-coated and brown as a heritage jacket piece over a plain back tee. Again, the collar is popped – rocking a James Dean charm – and the Wayfarer shades – in gloss-black retain the vintage style.

At the airport, double-denim is strong, retaining superb contrast with dark denim jeans and a sky-blue Chambray shirt. Rocking the half-tuck, the shirt is framed by a deep brown belt and leather boots – covered by the casual break of the denim.