Tesla‘s head chief has just announced via Twitter that their most affordable car to date, the Model 3 sedan, has a production timeline and price.

Elon Musk revealed via a series of tweets yesterday that the highly anticipated entry-level electric car will begin production in 2 years whilst its pre-orders start in March 2016. The price? US$35,000.

His announcement comes with the addition of a brand new ‘Gigafactory’ in California – the name given to Tesla’s expansive US$5 billion lithium-ion battery factory slated to be operational by 2016/17. 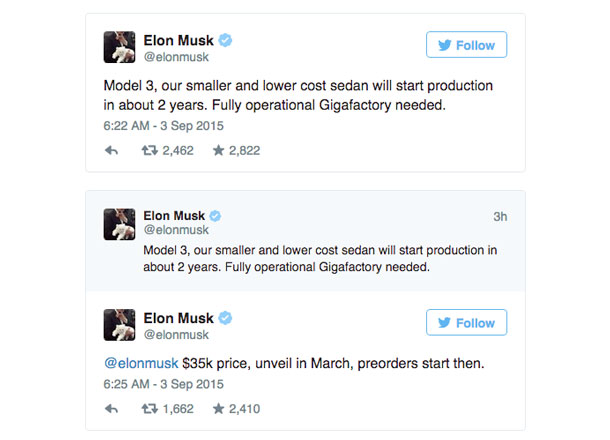 The Model 3 is aimed squarely at the entry-level car buyer and Australia can also expect the car on our shores at a slightly higher price than the quoted American figure.

In a past interview with the press, Musk said that the Model 3 “will be way different from any other car on the road, but in a way that’s really useful and just doesn’t feel like a weird mobile.”

He also revealed that to keep the price within reason, the Model 3 will be about 20 percent smaller than the Model S with some of its options being available the new car.