In a polling nation far, far away, conflicting parties were briefly stifled when Chewbacca appeared to have been captured by the local Ukrainian authorities. 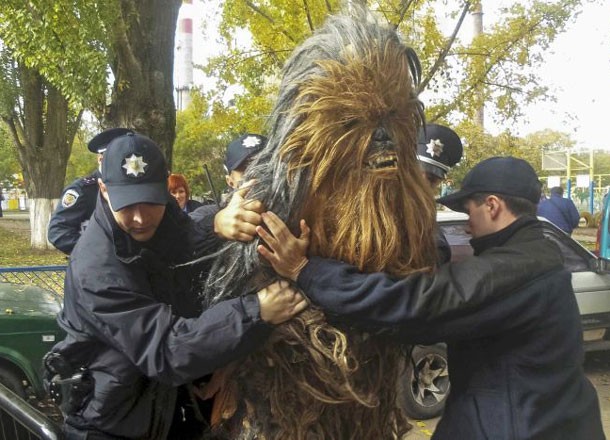 The man who was dressed in a Star Wars Chewbacca costume was detained outside his van with the Darth Vader theme playing in the background. He was issued with a 170-hryvnia fine ($AU10.30) fine for disobeying police orders and refusing to produce his ID.

It is believed that the Wookiee warrior is an activist from a marginal political party which forms part of the larger Pirate Party of Ukraine – a group consisting of 40 constituents who are advocating internet freedom and limits on copyright laws.

Chewbacca was caught on camera growling at the four officers before being forcefully pinned down onto the bonnet of a car. He had also reportedly driven a fellow candidate dressed as Darth Vader to the polling station and told reporters that he could not pay the fine because his “intergalactic bank” did not have a branch on Earth.

Star Wars candidates including Chewbacca, Jedi Master Yoda and Princess Amidala have all tried their luck in the nation’s polls in the past donning full costumes to no parliamentary success.