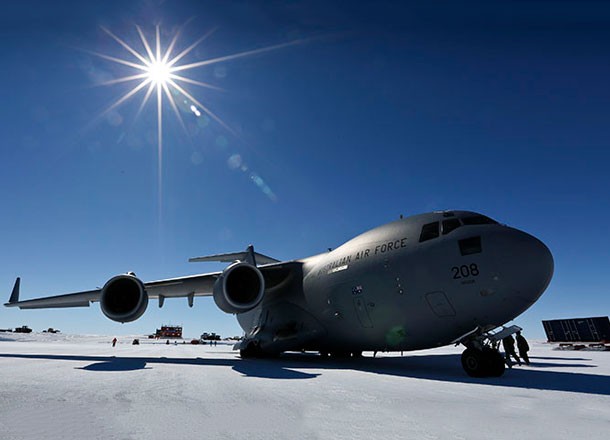 The RAAF is bringing their Aussie heat to the icy runways of Antarctica. The Australian Antarctic Division and the Royal Australian Air Force (RAAF) have successfully completed their first joint mission delivering bulk cargo to Antarctica by air.

Carrying the cargo was the C-17A Globemaster, which made the 5-hour, 3,500-kilometre journey to Wilkins Aerodrome after leaving Hobart at 9:30am last weekend.

The C-17 is the largest aircraft to ever land in Antarctica, and can carry up to 70 tonnes of cargo for over 10,000 kilometres. The cargo for this mission consisted of a new Hagglund — a dual-cab vehicle used for getting across snow and ice terrain, along with two quad bikes and pallet loads of building materials.

The trip, which was the first to use military assets for Antarctic logistics, would have normally been carried out by sea but relying on sea freight was problematic, according to the Australian Antarctic Division director, Dr Nick Gales.

“This opens up an enormous range of possibilities. It’s a really important flight it’s something that we’ve needed for a long time,” he said.