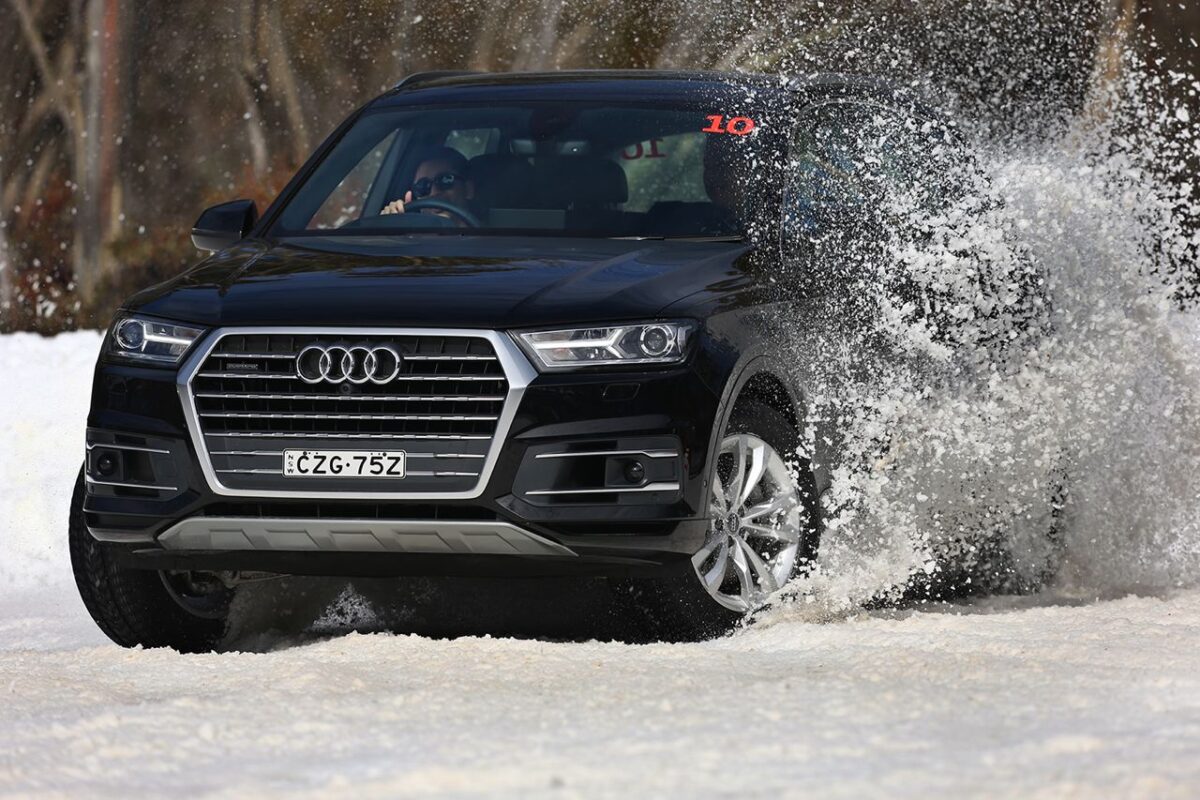 Snow and cars don’t normally play well together. Drivers tend to venture off the road into a bottomless pit of ice spikes or they’ll get bogged well into the white stuff.

Audi wanted to dispel this perception of hazardous driving so they did what any responsible car maker would: they put us behind the wheel of their latest Q7 SUV on a custom-made snow track with no rules. Marvellous.

“From the outside it looks like absolute havoc whilst on the inside it remained stylishly composed.”

Victoria’s picturesque Mount Hotham played the perfect test bed for this lucky schmuck who got to wrangle the sophisticated Q7 up mountains of snow, mud and black ice. Given that Audi prides itself on the Quattro moniker bred from the serious days of rallying, it was imperative that the German car maker proved its worth on some of Australia’s most treacherous roads today.

Does the sophisticated new SUV pass the test as an up-market off-roader with a wild streak? It comes deftly close. What it does promise though is spades of fun in a controlled and very safe environment – as any grown up Audi should.

We often find that Audi power units opt for a smoother power delivery at the lower rpm range and the Q7’s 3.0-litre diesel turbo-charged V6 is no different. On paper the engine pumps out 200kW with a commendable 600Nm on tap from 1,500rpm, which is enough to get a soft-roader out of any mildly hairy situation.

On icy roads and snow however, this all changes. The focus becomes more about putting power down through traction and this is where the Quattro system demonstrates the brand’s extensive experience on looser surfaces.

An eight-speed tiptronic ensures that the driver gets optimal power delivery at any speed whilst Audi’s Quattro permanent all-wheel-drive delivers the grip and confidence to keep pushing where it’s needed.

Throwing it around the snow track gave the engine no issues, even on take-off where mounds of snow was being tossed up. More importantly, from the outside it looks like absolute havoc whilst on the inside it remained stylishly composed – it’s an oddly enjoyable sensation where two opposites come together.

Hiking the Q7 up Hotham’s grand mountainous roads littered with icy mud holes was a straight-forward affair. There were noticeable differences in the road surface feel but the engine and drivetrain handled it with ease – not at break-neck speed of course. Combined with the Q7’s start-stop engine system and the fuel consumption averages in at just 5.9L/100km. This essentially means much more fun in the snow to be had. Or for you city folk, more mileage.

Cutting-edge technology dominates the inner-workings of the Q7. From the full digital dash which switches up vital car stats to the sophisticated driver assistance system built-in, the Q7 is seemingly built for driver integration.

Most noticeable was the ‘Adaptive Cruise Control with Stop&Go Function and Audi Pre-Sense Front and Traffic Jam Assist’ – which basically means the Q7 is a semi-driverless car.

We were heavily encouraged to test the prowess of this system which was kind of daunting given that we could drive in the snow whilst lifting our hands from the steering wheel.

On various hills the system worked by aligning itself with the sensors from other Audis in front and when it detected that you were getting too close or straying off the safe track, it would automatically apply braking pressure to individual wheels to steer the car back into shape (or stop). You’d need your hands on the wheel but the sensation of the mild assistance steering is definitely there.

Creature comforts are standard Audi-fair which is superb. Soft grey leather wraps about 70% of the interior including seats, dash centre console and steering wheel. The remaining 30% is made up of brushed aluminium and brown woodgrain finishes for an ultra premium feel. Top marks in this department as expected.

The Q7 exterior is both striking and clinical in true modern Audi style. You know it’s an Audi when you look at it, from the squared off headlights with intricate inner-LED daytime running lights, through to the oblique lines of the front fascia.

Size-wise it sits more like a proper 4WD from all directions with its staunch presence. It’ll no doubt set itself apart from the masses of soccer mum mid-sized SUVs out there and it definitely fits in with the up-market feel of Mount Hotham’s flashy resorts.

Audi went all out to prove that their big premium SUV (most likely destined for the city) is also no slouch in the wilds of the snow. The car does weigh in on the heavier side at over two tonnes and this can certainly be felt when driving it. The positive however is that the new Q7 has all the technology crammed in to get things moving in exquisite comfort and style.

It’s not an all-out off roader and it wasn’t designed to be, but if you’re looking for a decent middle ground between a luxurious weekend adventurer and hauling a party of seven over a significant distance, then the Q7 is easily your kind of car. 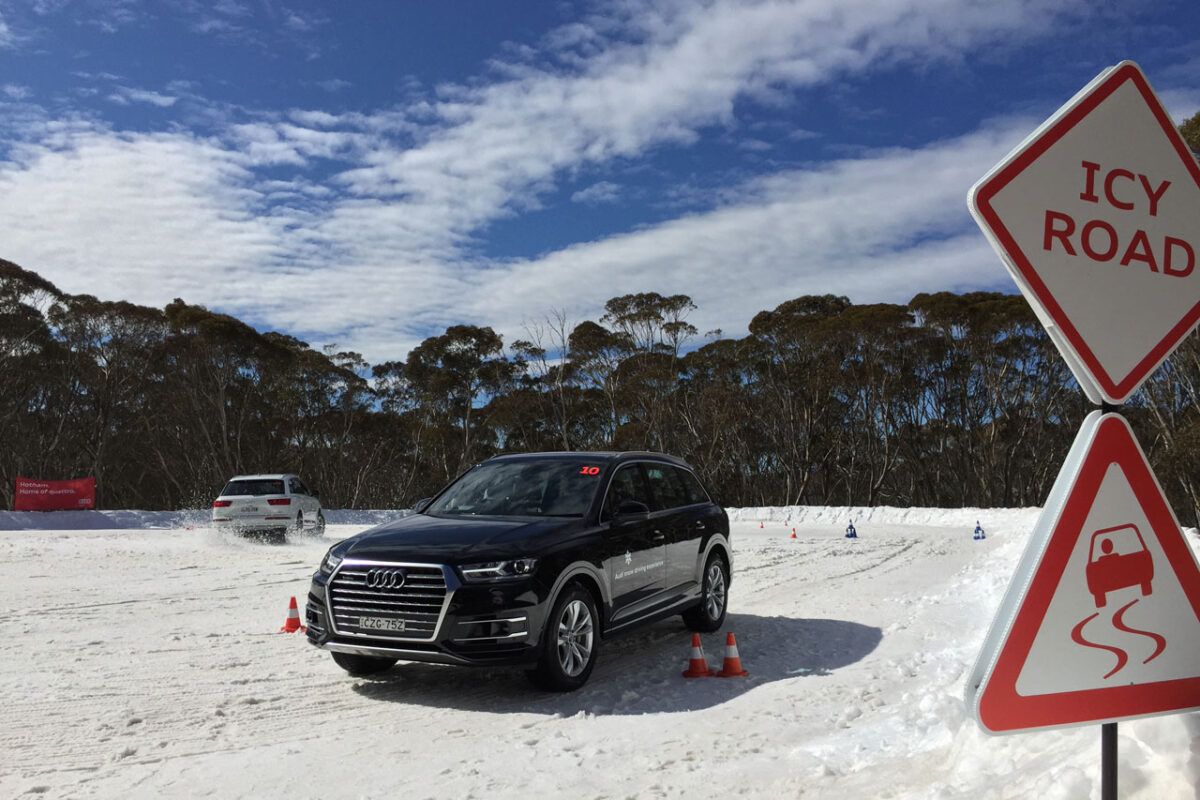 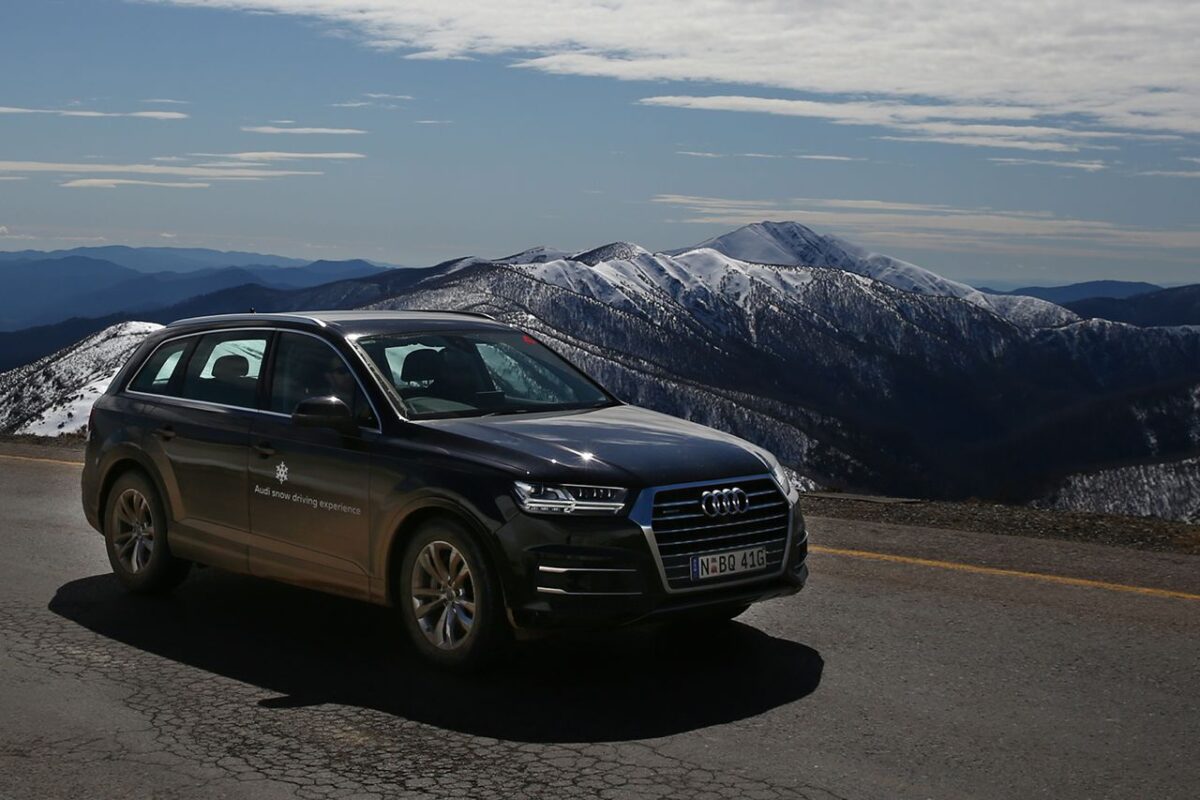 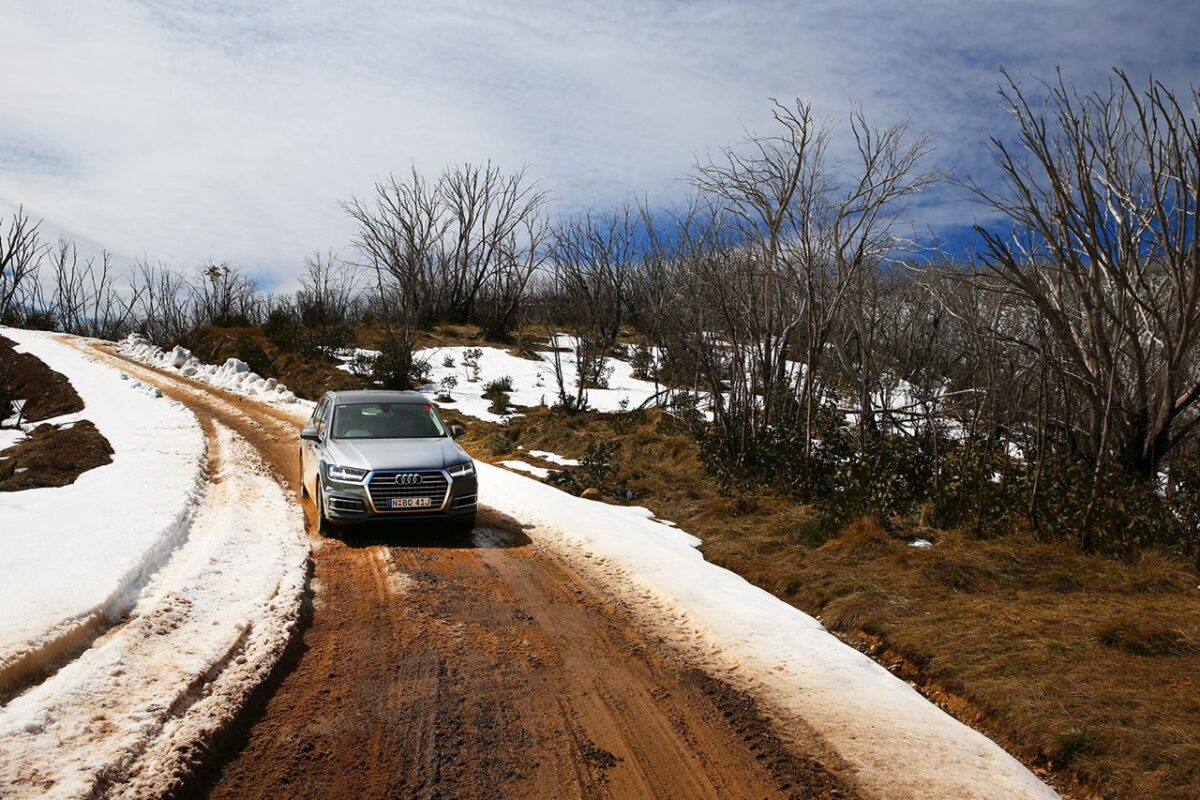 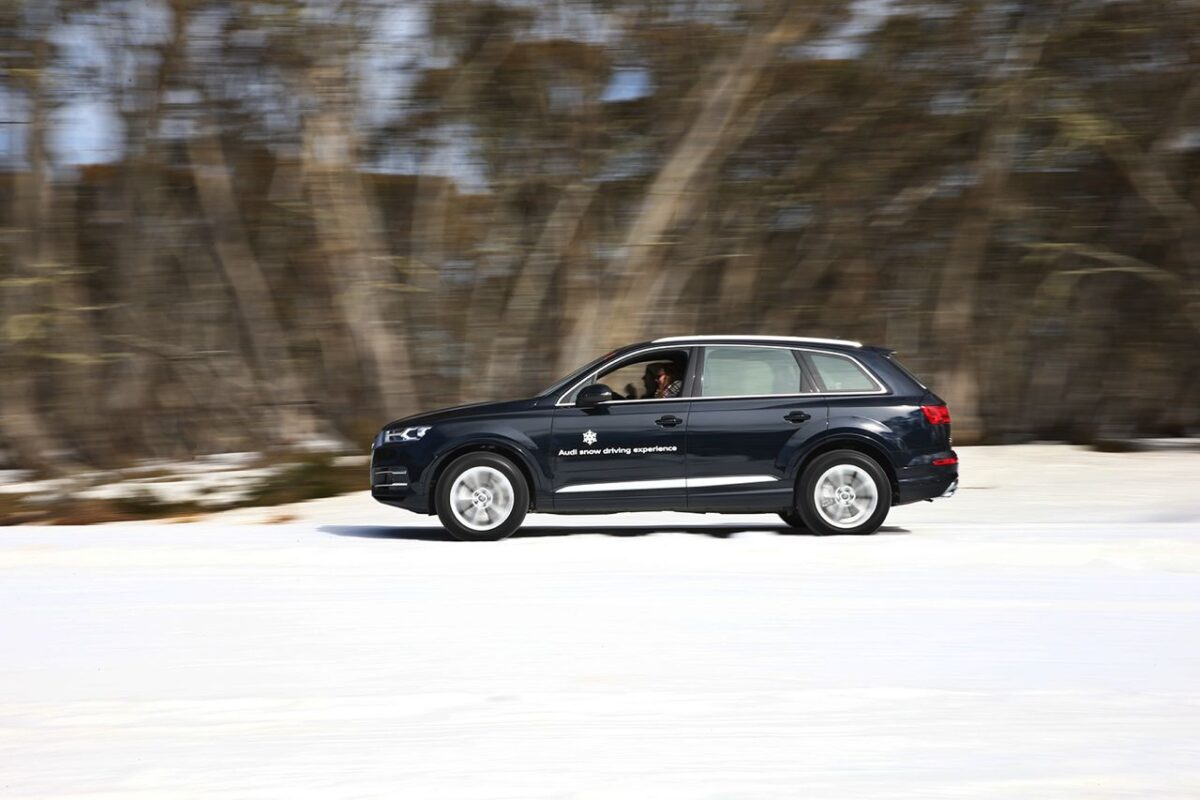 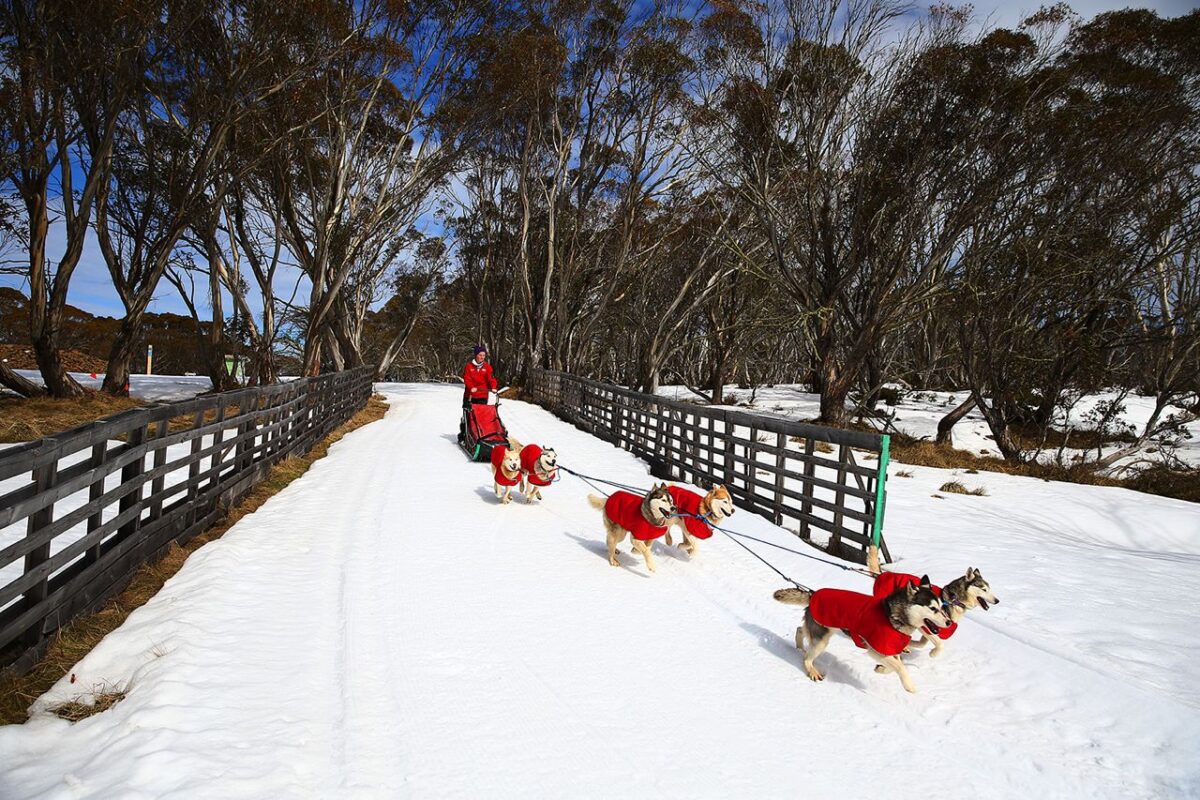 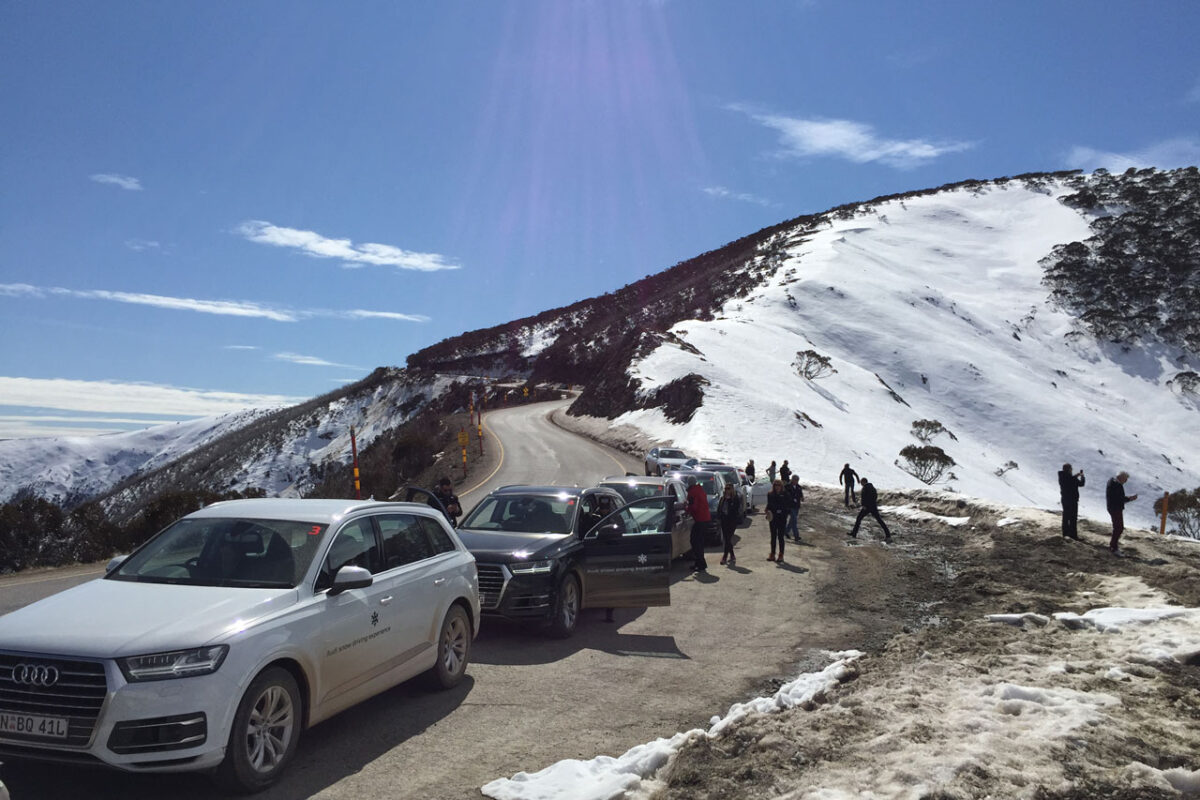