The following article has been sponsored by Victorinox

Take the fists of Chuck Norris, the survival skills of Bear Grylls, the adventurous spirit of Neil Armstrong and the unapologetic machismo of Putin riding shirtless on a bear. Blend them all together and turn them into a watch. That’s the Victorinox INOX.

This is one serious timepiece. The I.N.O.X. was created to celebrate the 130th anniversary of Victorinox, but it’s engineered to survive so much punishment that it could still be here on the 230th. We’d barely be surprised if it was ticking when alien archaeologists excavate the ruins of our extinct planet.

In other words, unless you plan to turn a machete into a bracelet, this is the toughest thing you’ll wrap around your wrist.

That’s not all the I.N.O.X. has going for it. For all its rugged strength, the watch is surprisingly versatile. The I.N.O.X. offers style and Swiss-made quality that can accompany you from suit to surf and back again. If you’re searching for a single watch that will serve you well in a range of circumstances, this is the one. Here’s why and how to wear it.

Victorinox launched the I.N.O.X. with an ambitious objective: set a new industry standard for watch strength and resilience.

Victorinox took its reputation for durability and turned it up to eleven. While most of the company’s watches undergo 70 to 80 tests over the course of product development, the I.N.O.X. was subjected to 130. And when we say “tests,” we don’t mean geeky guys in lab coats taking measurements between rounds of Tetris.

The I.N.O.X. went through trials that would have Odysseus throwing in the towel. It was set on fire, tumbled in a washing machine, sand-blasted, encased in ice, run over by a 64-tonne tank and dropped from the height of a three-story building. It was boiled, beaten, scraped and abused, all in the name of proving it can take more torture than any other modern watch.

On a more practical level, the I.N.O.X. can resist variations in temperature from -51°C to 71°C, can withstand up to 12 g-forces of acceleration and deceleration, and can work underwater at depths of 200 metres. If it comes into contact with corrosive liquids, it can survive being slathered in petrol, oils,  insecticides and cleaning products. Your wrist won’t be so lucky.

When Victorinox says the I.N.O.X. is “Made To Last,” they mean it. 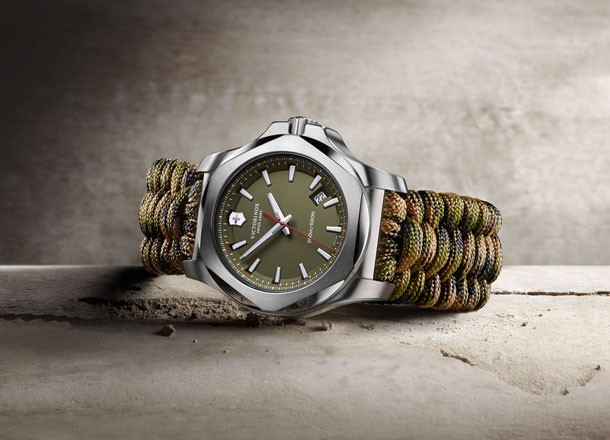 It’s not all tanks and tumbles and conflagrations. Beyond the eye-catching experiments, the I.N.O.X. has all the functionality and dependability you’ve come to expect from the brand that birthed the Swiss Army Knife.

On the style side of the equation, the I.N.O.X. features a 43mm case machined from a single block of steel. The dial comes in several colour options, with raised hour markers stamped in from the back of the watch face. The bracelet can be steel, rubber or specially woven paracord.

To ensure it can withstand an apocalypse, the watch features a scratch-resistant, anti-reflective sapphire crystal that is set below the bezel for shock absorbency. Extra protection comes in the form of a removable black nylon and silicone bumper that fits snugly over the face. Inside, the I.N.O.X. is powered by a Swiss-made Ronda quartz movement.

All that clocks in at a surprisingly reasonable cost for a watch that will live on long after you push the proverbial daisies.

How To Rock It 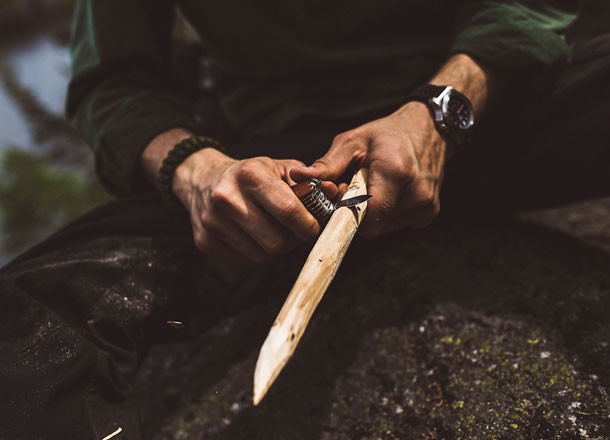 There’s a point in every man’s life when he’s looking for a watch. One watch. The watch. He swears that someday he’ll own a museum-worthy collection, proudly displayed in a closet dedicated just to his horological exploits. Until that day, he needs a single, versatile, affordable timepiece that can carry him through a variety of occasions and outfits.

The I.N.O.X. is that watch, so let’s see what this bad boy can do. The only limits are the ones you impose. 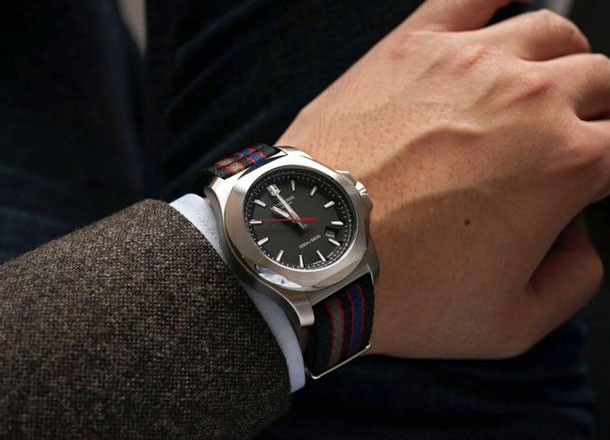 A suit is not the first thing you think of with a watch so rugged. You think the classic formalwear watch is small and discreet, with a clean white face and an elegant leather strap. And you’d be right – that is the classic look, but since when does fashion have to obey all the rules? The I.N.O.X. kicks your suit up a notch and guarantees you won’t look like anyone else in the office. 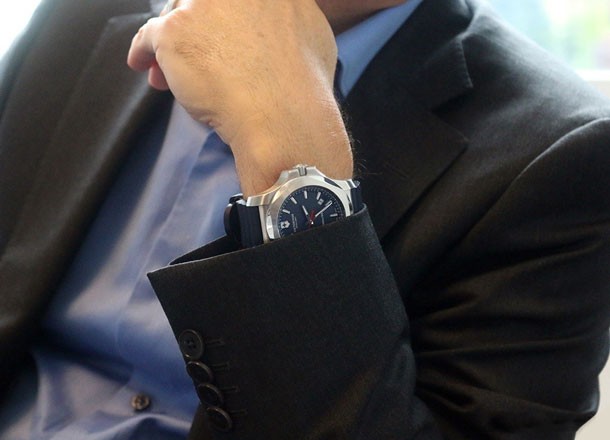 As good as it looks with the posh suit you splashed out on, the I.N.O.X. doesn’t have to be buttoned up. It works equally as well with the elusive smart casual vibe. Wear it with a button-down and no jacket. Throw a leather bomber over the top for a look that straddles the line between work and play. Alternatively, try a blazer with a t-shirt underneath. The overall effect is smart but not stiff. 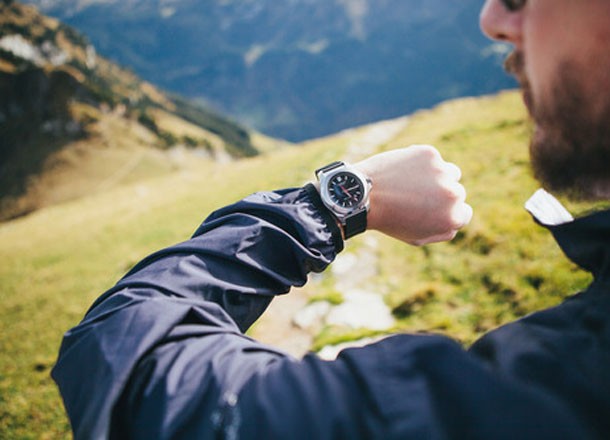 This is the time to let the I.N.O.X. shine. While the sporty trend is happening, wear your watch with a look that’s almost gym appropriate but still stylish enough for the street. Relaxed separates are the name of the luxury sportswear game. Think puffer vests, sweatshirts, sweatpants, tailored track jackets and designer backpacks. Cool kicks are a must. 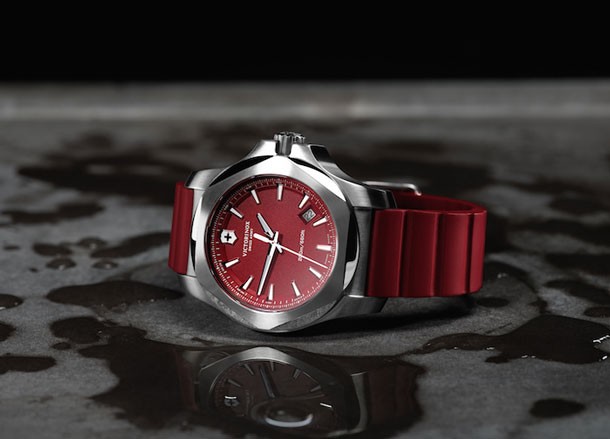 The I.N.O.X. comes in four colourways, so why not take advantage of all the hues? As much as we love classic black and white, it’s good to break out of the colour rut. Opt for the I.N.O.X. in blue, green or the trademark Swiss Army red. Rock it as part of a daringly monochromatic outfit or an experiment in colour-blocking. 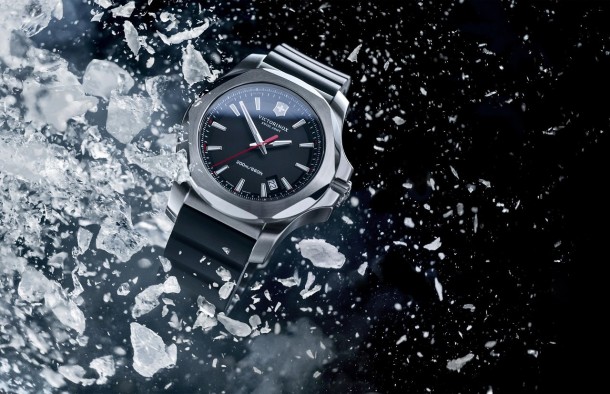 Match your tough-as-nails watch with a look that’s equally hard. Crack out a denim shirt and your workwear-inspired boots. Go for bold camo. Unleash your inner rockstar with a leather jacket. Pop the black bumper on your I.N.O.X. to take it from classy to badass. Just don’t try it all it once – you’ll look less “bad boy” and more “been on a two-week bender.”