How To Get Adam Levine’s Style

Adam Levine is no stranger to bright lights and hoards of screaming fans. Born and raised in Los Angeles, it’s no real surprise that the man oozes oldschool Californian charm and charisma wherever his music and acting takes him.

When he’s not fronting the American pop/rock band known as Maroon 5, Levine can be found traversing the globe in the edgiest street attire fit for a modern rock star. And once he’s done with dressing like a Californian, Levine effortlessly changes it up by getting polished for the red carpet in a tux or suit.

We’re looking forward to what this triple-threat can serve up in the coming years but for now we’ll settle on his rocking wardrobe and how to score it. 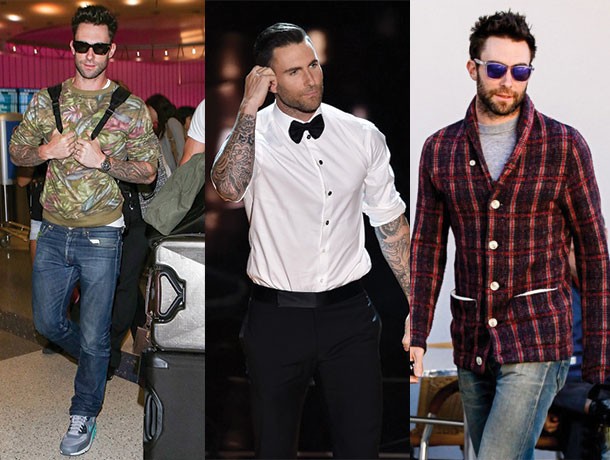 Let’s face it. Adam Levine is no Steve Tyler or old school rocker. He’s more the modern day Queen with a dash of Beckham. This, in our opinion, is a very good thing as it showcases Levine’s diverse range of looks which he not only pulls off with ease but genuinely owns.

RELATED: 50 Ways To Rock Florals (And Not Look Like A Sofa)

From leather jackets to floral print sweaters to simple t-shirts teamed with fitted jeans and sneakers, this is off-duty Levine down to a tee. When he does suit up, there’s also a unique touch of his own. Levine is careful to abide by the laws of the classic black for the red carpet but he also throws in a mean pair of shades to give it the rocker attitude. Dress shoes, dress watches and the coolest shades? Now you’re talking. 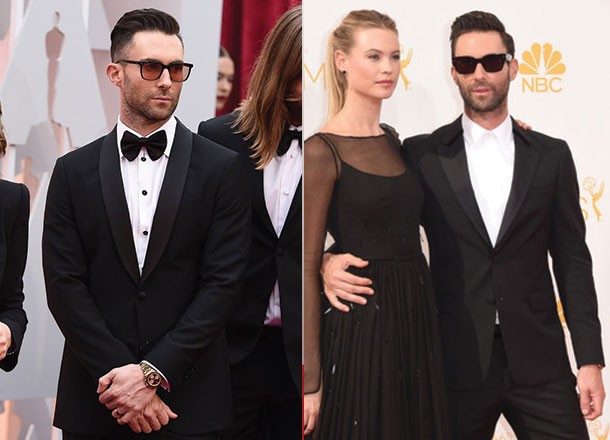 Levine is careful not to stray too far from convention when it comes to red carpet affairs. Often found with his wife and Victoria’s Secret model Behati Prinsloo wrapped around his arm, it’s easy to neglect the effort Levine has put in to his cocktail attire.

Black definitely suits the singer in formal situations as his light skin complexion and thinner frame leaves more room for the finer touches to standout. Think non-gaudy dress watches, rings and bespoke shirt buttons. The dark evening jacket sans tie also makes for a svelte look without looking drab. It’s a simple case of monochrome magic in play which would often look pedestrian if it weren’t for one simple touch – sunglasses.

RELATED: The Cocktail Dress Code Defined (And How To Wear It With Style)

Whether they’re a shaded pair of fully blacked out, Levine uses this to his advantage to emphasise that he’s not just a free-loader. Slicked back with a clean quiff, this look often works well with people who have a louder personality to back it up.

And remember, always keep the black shoes polished. Wherever you find Levine on the red carpet, you’ll find a pair of polished dress shoes. It’s all about the finer touches here which may seem superfluous but adds up in the end. See our simple guide to shoe polishing if you’re unsure as to how to go about it. 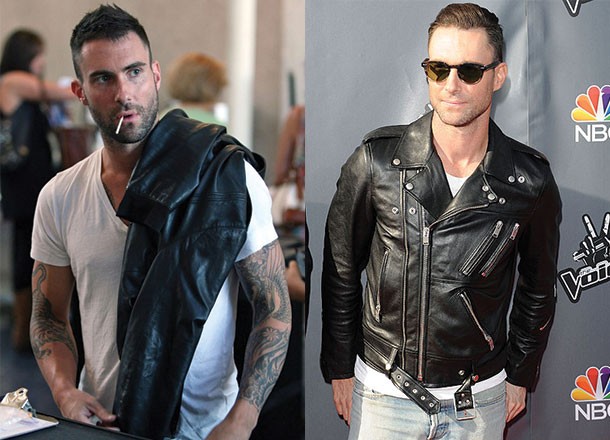 The leather jacket is the staple piece to any musician’s wardrobe. Worn for an off-beat look by Levine, the leather jacket simply oozes Motley Crue attitude. Detailing is key in Levine’s arsenal of leather jackets with pieces which feature a multitude of zips, studded metal buttons and waist strap. To pull of the louder look, it’s important to keep everything else minimal. A simple white granddad shirt paired with faded jeans, a pair of dark sunglasses and dress boots will do the job just fine.

RELATED: How To Dress Like A Modern Bad Boy

If it’s a cleaner look you’re after, simply throw the black cow hide over your shoulder and let your inner-James Dean do the talking. And remember, never go overboard with leather pants (or leggings) with your leather jacket. There are laws in today’s society. 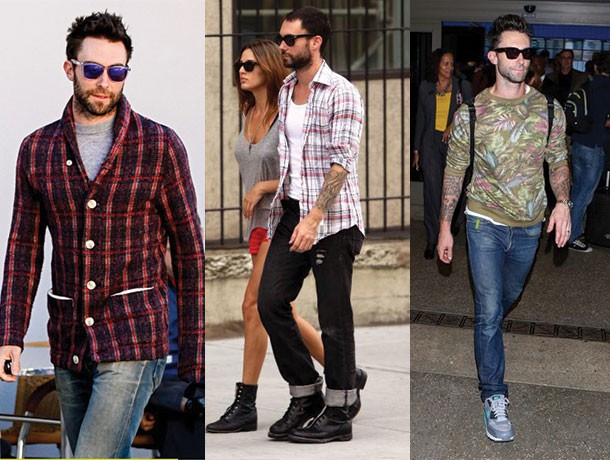 Eclectic, stylish and colourful. These are the words that we’re using to highlight Levine’s trendy off-duty style. Looking first at his colder weather wears, Levine utilises colour to his absolute advantage. More specifically, he opts for lighter outerwear pieces such as cardigans and sweaters. They’re not your average run of the mill garments though.

Levine’s cardigans feature a Tartan finish which makes it appear more like an unstructured blazer. The shawl neck and contrasting buttons paired with a light pair of jeans make this one very cool casual look. Likewise, for when Levine is on the move, a simple sweater finished in a complex arrangement of cool tribal floral print is pure pop star genius without looking overly pretentious. And let’s not forget the sunnies, this time in a bolder colour to complement the outfit.