How To Get Jeff Goldblum’s Style

The term ‘dad-bod’ simply doesn’t exist in the Jeff Goldblum vernacular. That’s because the 63-year-old puts most young guys to shame when it comes to men’s fashion.

With no shortage of films to his name since 1974, Goldblum has carved out his own slice of Hollywood pie whilst ageing with grace and his own sense of style.

Of course what really brought him into the spotlight was a film called Independence Day which saw Goldblum and a young Will Smith fend off an alien invasion. Twenty years on, that film is getting a sequel and Goldblum has reprised his role as the titular hero. What does that mean for you?

Goldblum will once again be out in force gracing cameras with his most defining looks: Biker Dad, Distinguished Hipster and Suited Up Silver Fox.

Is there anything this man can’t pull off? Well if past style mistakes are anything to go by, the answer appears to be a big resounding ‘no’. Today we show you how to get Jeff Goldblum’s style. 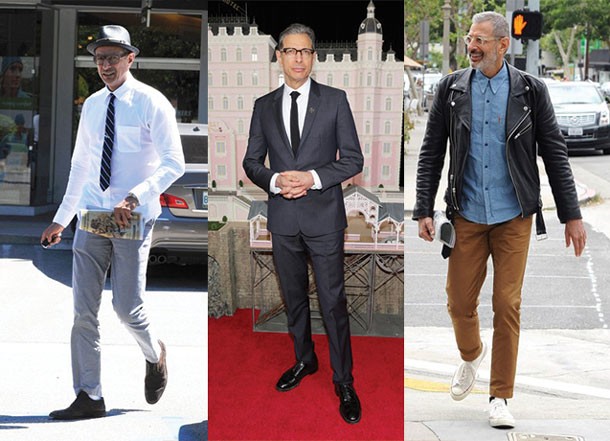 If we had to use one word to describe Goldblum’s style, it’d be ‘versatile’. The actor who once chased around dinosaurs in slick back hair and an unbuttoned dress shirt is much more stylish in reality than he is on the big screen. The father and husband pulls this off with a combination of finely appointed suits – whether it’s a white tux or preppy unstructured blazer.

On the streets and about town however, Goldblum likes to change things up to keep the press guessing. He’s also renowned as only a handful of men over sixty who can rock Converse sneakers like a boss. Other looks Golblum goes for includes classic dark suits cut in slim for an ultra modern look (this is what keeps him looking so young).

When it’s a mix between formal and casual, Goldblum vouches for a a clean pair of dress pants or rolled chinos and matches it up with a buttoned shirt, preppy tie and tie clip. And let’s not forget the Goldblum signature piece – the classic Fedora hat.

Talk about an old dog with fresh tricks. 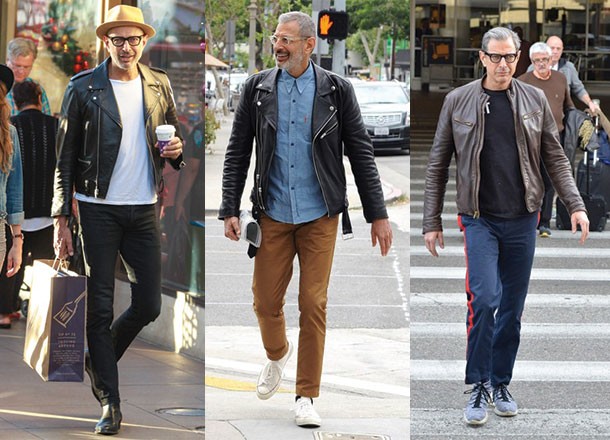 If only all dads dressed this badass. Goldblum is a sworn fan of cool leather jackets and has an endless arsenal of the beautifully textured garments at his disposal. Black is usually his go-to colour which he complements with contrasting shirts in white, pastel or chambray.

He’s also a fan of the more designer-style leather, with pieces that offer asymmetrical zips, buckles, studs and pockets. In the end, it’s an explosion of monochrome and colour highlighted by Goldblum’s now-signature grey hair which he rocks with absolute class.

If there was a term to describe this stand-out look, it’d be ‘Rock Leisure’. Sneakers, track pants, leather jacket and slicked back grey? Proceed with caution. Unless you’re Jeff Goldblum. 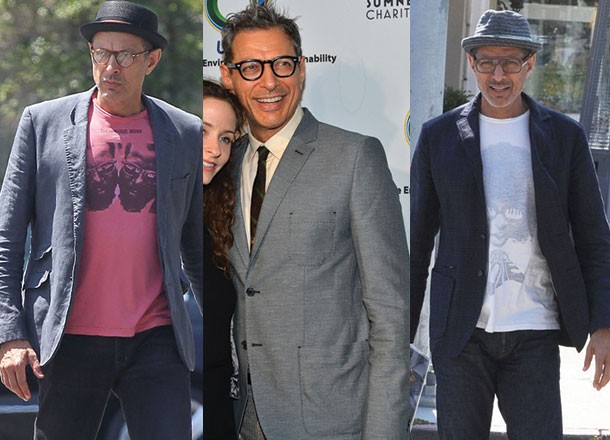 The unstructured blazer is a mainstay for the man who doesn’t seem to age. Teamed with his favourite Fedora or straw boat hat, Goldblum pulls off an incredibly deceiving look which straddles the fine line between weekend warrior and evening wear slayer.

During the day, it’s a simple case of intuitive colour blocking with cool print tees under an unstructured blazer. This is paired perfectly with either fitted jeans or chinos. Colour framed glasses are a bonus in this case which can tie in the look perfectly.

Come night time, Goldblum loses the hat and opts for dress shirts and skinny striped ties for the red carpet. Frames revert back to black and you have a man who is now worthy of an award. Genius or street smart, it’s just damn cool. 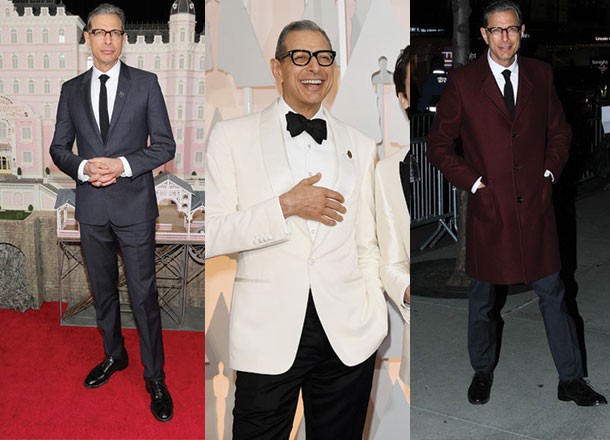 Goldblum’s svelte figure and 1.94m frame affords him some of the finest suits and tuxedos on the red carpet. When he goes for the slim cut in his suits, he knows how to dress for a tall guy and absolutely towers over people – in a good way.

Goldblum usually opts for darker colours in charcoal, grey, black, pinstripe or a deep Marsala (think maroon with more pop). It’s a classic look which works well with his dark complexion and also highlights the benefits of being a silver fox. His dress shoes are often polished black, again keeping in line with night time convention.

During the day if you do find Goldblum in a suit, it’s a full one-eighty turn on how he executes it. An off-white/almost grey ensemble teamed with a bright bow tie, pastel shirt and tinted sunglasses propels the man into the lofty heights of the fashion stratosphere. If you didn’t know him as an actor, you’d probably mistake him on the street for someone who just walked out of Pitti Uomo.