Following Wednesday’s disturbing mass shooting at the Inland Regional Center in San Benardino, California from which 14 people were shot and killed, and 21 others were injured, comes the harrowing statistic that there has been one mass shooting in the US every day of 2015.

San Benardino’s devastating case marks the 355th mass shooting in the U.S. this year, and brings the country’s tally up to 1,052 shootings in 1,066 days. The San Bernardino shooting is also the deadliest since the 2012 massacre at Sandy Hook Elementary School in Newtown, Connecticut which claimed the lives of 20 students and six adults. 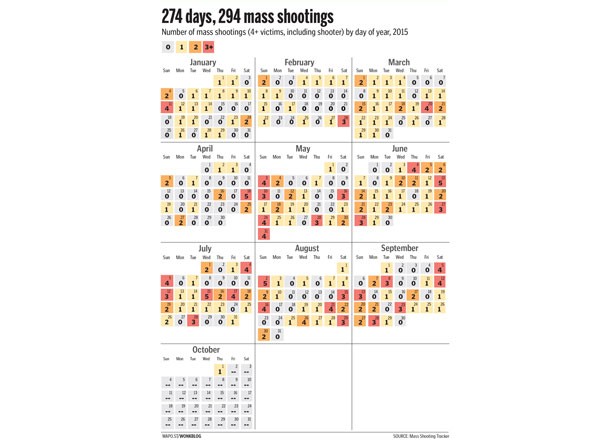 One common definition of a mass shooting is ‘four or more people killed or injured without a cooling off period’. Some of the worst to occur in the States this year include:

President of the United States, Barack Obama is getting pretty tired repeating the same speech as well, criticizing those who object to stricter gun control laws for allowing such a tragedy to happen so often. Following the San Bernardino shooting, Obama said “We have a pattern now of mass shootings in this country that has no parallel anywhere else in the world.”

“Somehow this has become routine…We have become numb to this.” What else that’s become routine is the response of those who oppose any kind of common sense gun legislation. When will it end?