A bespoke suit speaks volumes about a man. What better place to obtain such an item than in the heart of London. London tailoring has long been revered for it’s cut, quality, and the stature it gives gentlemen. We have scouted the very best tailors in the land of Kings and Queens. Enjoy. 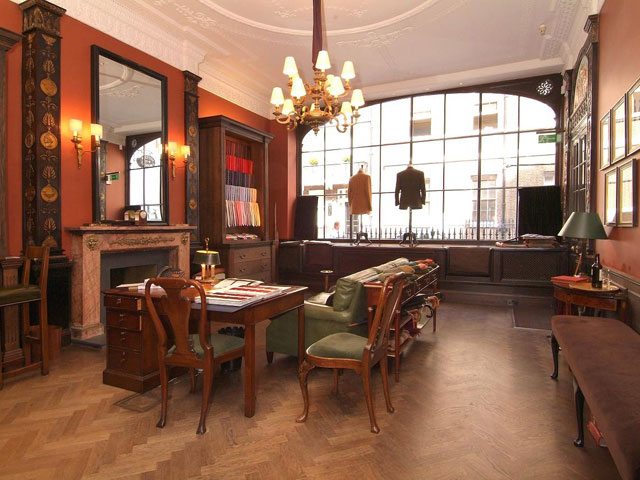 London Tailor #1 – Anderson & Sheppard
Since 1906, Anderson & Sheppard has upheld the traditions of Savile Row to create stunning bespoke suits for its clients.  Fluidity of movement and a natural body line are the key features of the firm’s style, an aesthetic that has has attracted A-list clients from Chaplin and Astaire to Liam Neeson and Bryan Ferry. “In my opinion,” Tom Ford told Le Figaro, “Anderson & Sheppard is the best tailor in the world.”  Now that’s a recommendation that just can’t be ignored. 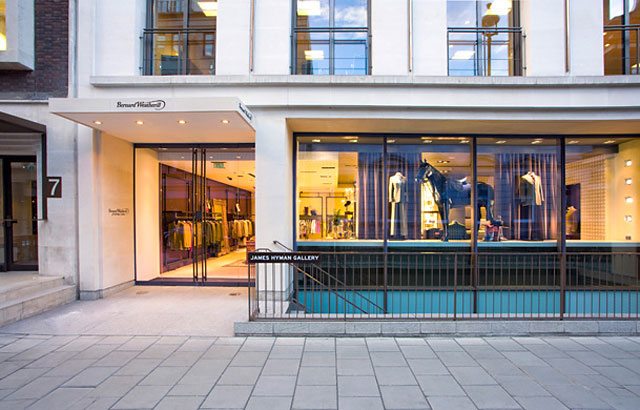 London Tailor #2 – Bernard Weatherill
Bernard Weatherill Ltd. began as a family business in 1910 in Sunninghill.  Two years later it was established on Savile Row, and in 1920 it was awarded a Royal Warrant by His Majesty King George V as a riding clothes outfitter and livery tailors.  The firm currently holds the same Royal Warrant for Her Majesty the Queen, and in July 2010 a new flagship store was opened on Savile Row offering both ready-to-wear clothing and bespoke pieces for men and women. 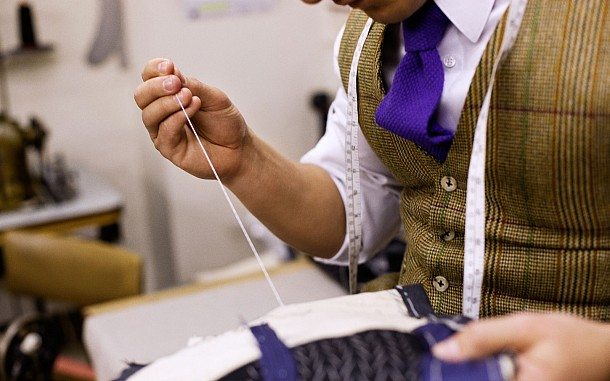 London Tailor #3 – Cad & the Dandy
Cad & the Dandy is committed to making bespoke tailoring accessible to all, by offering high style that doesn’t come at a high price since 2008.  All suits are hand made with a modern British cut and British cloth from shops in The City, Savile Row, and Canary Wharf.  Three grades of suit are available – machine stitched, half hand-stitched, and fully hand-stitched – to suit the needs of a diverse clientele that includes eccentric former boxing champ Chris Eubank. 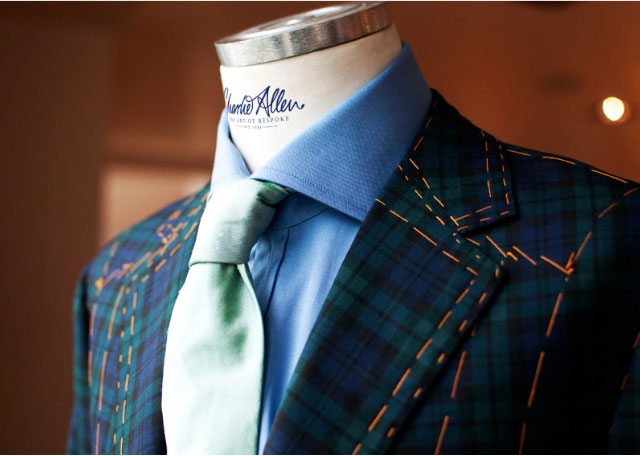 London Tailor #4 – Charlie Allen
Charlie Allen is a star of contemporary menswear with over 25 years of experience in the field. His suits are both classic and fresh, with a softer, more understated feel than many of today’s more stiff and structured garments.  Clearly, he has found a winning approach – he has designed suits for Prince, the England football team, and Princess Anne, and he once made a silver glow-in-the-dark suit for Ringo Starr. 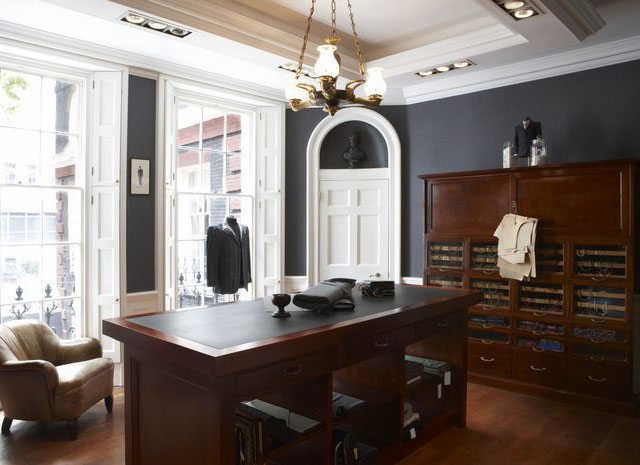 London Tailor #5 – Dunhill
The bespoke service at Bourdon House, formerly the London residence of the Duke of Westminster, is the result of 100 years of experience in the world of luxury tailoring.  A distinctive Anglo-Italian twist sets Dunhill’s garments apart, as does their 3-floor store which includes a spa, barber, and bar.  In addition to London, Dunhill can be found in Tokyo, Shanghai, and Hong Kong, bringing elegant masculinity to an international audience of modern gentlemen. 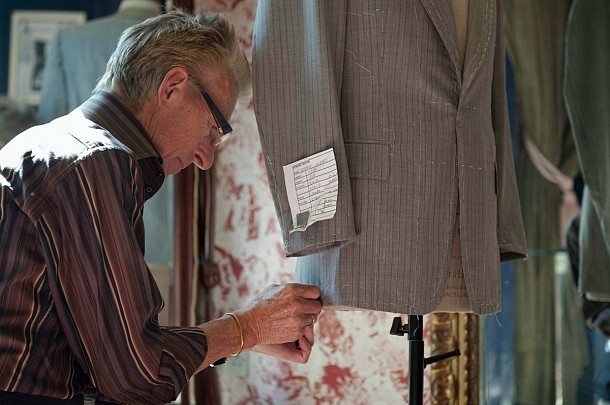 London Tailor #6 – Edward Sexton
Edward Sexton has been a trailblazer of bespoke tailoring since Valentine’s Day 1969, when he opened Nutters at No. 35a Savile Row with Tommy Nutter.  As a key player in the history of Savile Row, Sexton has dressed the likes of Andy Warhol, Mark Ronson, Bianca Jagger, and John Lennon.  He now operates under his own name in Knightsbridge, where he brings his innovative style to discerning customers looking for a one-of-a-kind experience. 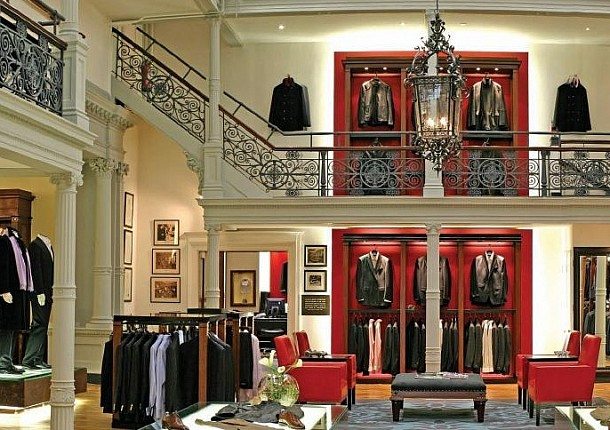 London Tailor #7 – Gieves & Hawkes
Located at the prestigious address of No. 1 Savile Row, Gieves & Hawkes is the result of the union between two separate businesses: Gieves, founded in 1785, and Hawkes, founded in 1771.  The merger was completed in the late 19th century, and the firm went on to become the first Savile Row tailor to offer ready-to-wear clothes.  Gieves & Hawkes’ bespoke reputation has earned them three British Royal Warrants, for HM Queen Elizabeth II, The Duke of Edinburgh, and The Prince of Wales. 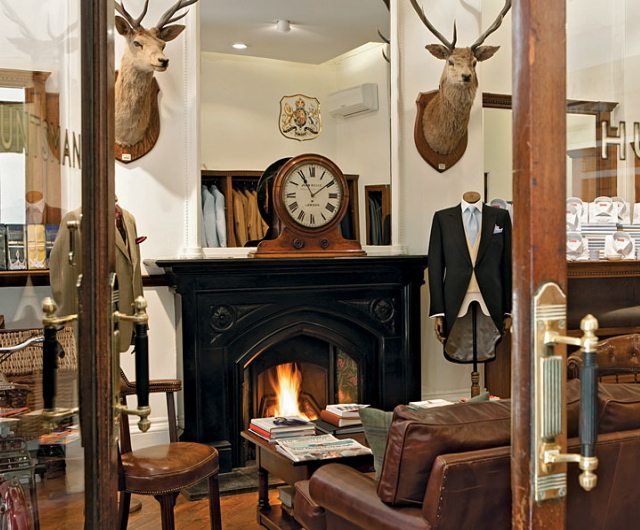 London Tailor #8 – Huntsman
Henry Huntsman established this firm at 11 Savile Row in 1849, and received a Royal Warrant from the Prince of Wales in 1865.  Huntsman’s signature features include a riding coat-based silhouette, firm shoulders, and a sculpted waist.  Huntsman is also known for having the most expensive starting price for a two-piece suit on the Row, being mentioned in a Tom Wolfe novel, and the two stags’ heads that have hung in the shop since being left behind by a customer in the ’20s. 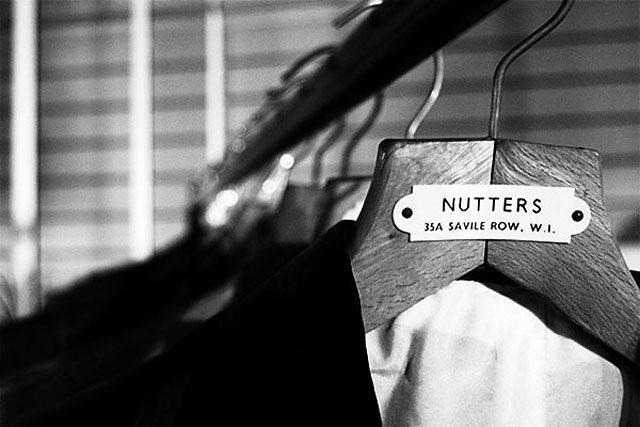 London Tailor #9 – Nutters
Few names on Savile Row hold as much debonair esteems as Nutters. Nutters was established in 1969 by the late, great, Tommy Nutter, the original maverick tailor. A man of wit and humour. Whether a suit is cut along classic lines or high fashion, for him or for her, from advanced technical fabric or hand-woven cloth, the making process remains the same, almost entirely by hand, employing at least 80 hours of highly skilled craftsmanship, producing clothes of inimitable style and heirloom quality. (Photo: Glass Magazine) 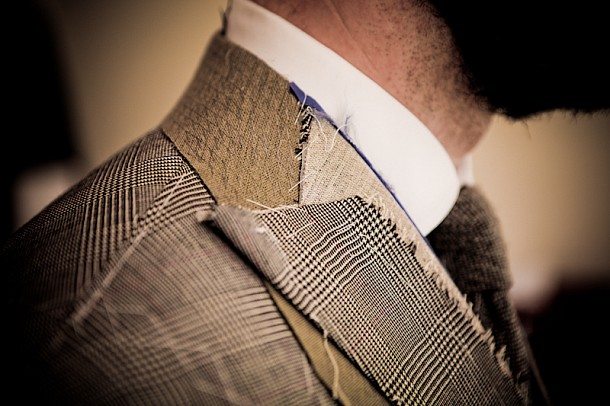 London Tailor #10 – Henry Poole
Often called the “Founders of Savile Row,” Henry Poole & Co has been a family-run business since its inception in 1806.  They originally specialized in military tailoring, but are now famed for creating the short evening jacket for the Prince of Wales that has become known as the Tuxedo.  Poole’s also counts Winston Churchill amongst its customers, and has been issued a staggering list of Warrants, from HIM The Emperor Napoleon II in 1858 to HM Queen Elizabeth II in 1976. (Photo: permanentstyle.co.uk) 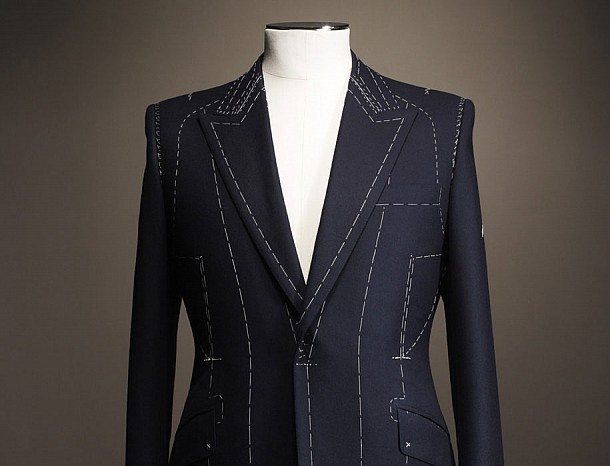 London Tailor #11 – Kilgour
Kilgour was originally founded in 1882 as T & F French in Piccadilly, before merging with existing Savile Row tailor A.H. Kilgour to form Kilgour & French in 1923.  The firm became “Kilgour” in 2003, and continues to make exceptional garments that are impeccably fitted and styled.  Kilgour provided almost all of Cary Grant’s wardrobe in North by Northwest, and now keeps the Row current by blending modern innovations with the traditional English aesthetic. 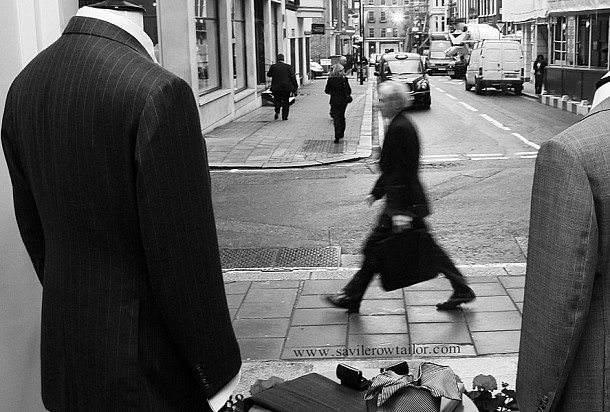 London Tailor #12 – Maurice Sedwell
Maurice Sedwell has won numerous accolades, including the Men of Merit Award and Trailblazer Award, since opening its doors in 1938.  The designer was also a Golden Shears Tailoring winner and a UK representative at the World congress of Master Tailors.  It’s a reputation well-deserved: the company offers meticulous attention to detail, unsurpassed quality, and high style to customers looking for a truly exceptional sartorial experience. 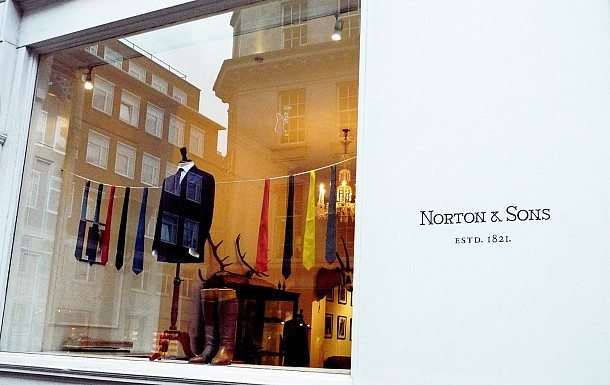 London Tailor #13 – Norton & Sons
Established in 1821 by Walter Grant Norton, Norton & Sons was honored by becoming the tailor and Royal Warrant holder to the German Emperor William I. The tailor continues to thrive in the 21st century, having worked with the royal households of Austria, Belgium, Denmark, Italy, Prussia, Spain, and the UK, as well as 3 U.S. presidents.  The firm is particularly known for its sporting garments and lightweight clothing, the latter of which was worn during the opening of Tutankhamen’s tomb. 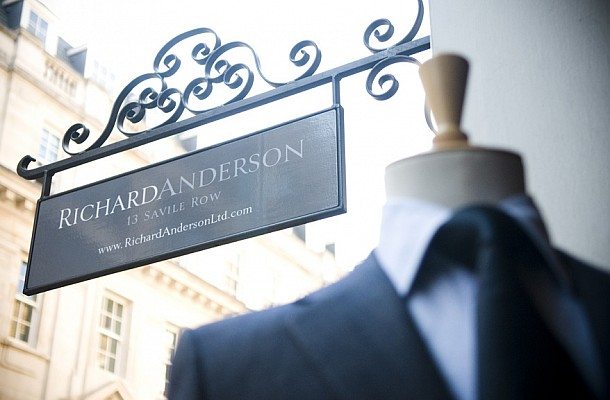 London Tailor #14 – Richard Anderson
Upon its opening in 2001, Richard Anderson Ltd. became the first bespoke tailoring house to open on Savile Row in 50 years.  But don’t let its youth fool you – the firm’s team brings together over 100 years of experience on the Row, and represents a fresh take on the British institution that has appealed to Simon Cowell and Benicio del Toro.  Anderson even published a book entitled Bespoke: Savile Row Ripped and Smoothed in 2009. WWW 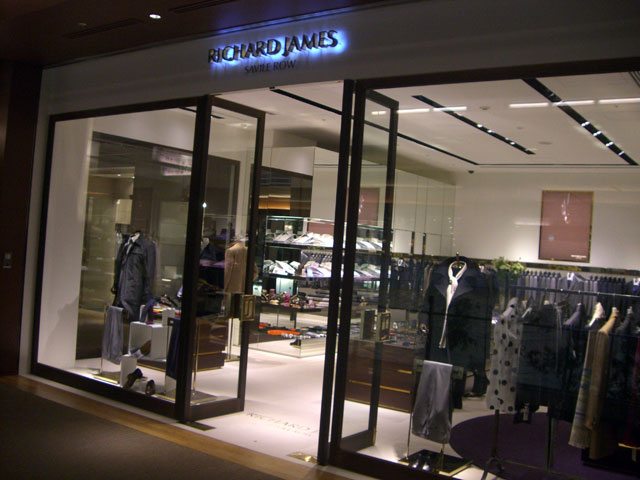 London Tailor #15 – Richard James
A founding member of the Savile Row Bespoke Association, Richard James joined the elite tailors on the Row in 1992.  All Richard James suits are pieced together in-house by hand, after being created by  client and cutter over the course of as many consultations as are deemed necessary.  Notable clients include Tom Cruise, Robert De Niro, and Dustin Hoffman, as well as Noel and Liam Gallagher who wore Richard James suits on their respective wedding days. (Photo: tokyoweekender.com) 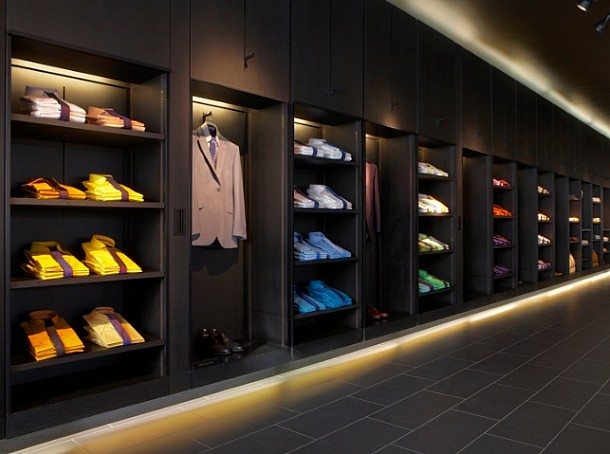 London Tailor #16 – Ozwald Boateng
Will Smith, Jamie Foxx, Samuel L. Jackson, and Mick Jagger are all fans of Ozwald Boateng, a Ghana-born designer who began making bespoke suits in 1990.  He is credited with bringing the Savile Row sensibility to a new generation, and with coining the term “bespoke couturier” for those who consider themselves both designers and tailors.  Boateng came to the Row in 2007, to bring his unique suiting philosophy of vibrant colors and refined fabrics to the well-dressed masses. 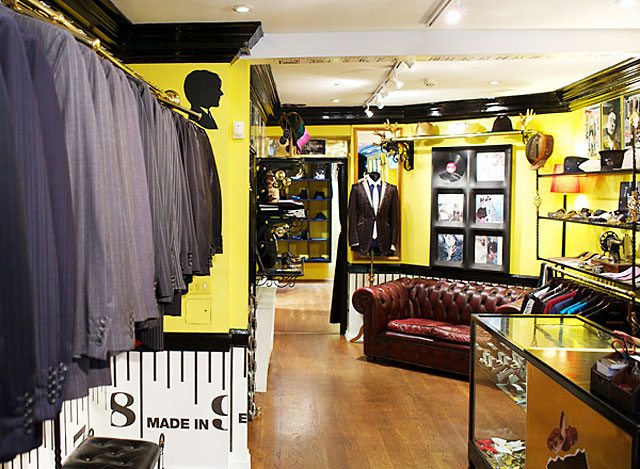 London Tailor #17 – Tom Baker London
What do Robert Plant, Rhys Ifans, and Glen Matlock of the Sex Pistols have in common?  Not only are they all musicians, they are all clients of avant-garde tailor extraordinaire Tom Baker.  When you  mix classic English fashion with rock ‘n’ roll flair, Tom Baker is what you get.  The house style favors the London Cut of sharp shoulders, an accentuated waist, and a clean trouser line, but puts a seriously cool twist on it thanks to Baker’s personal supervision over each piece. 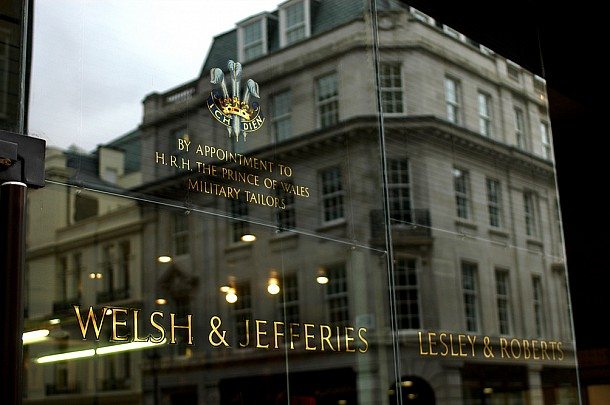 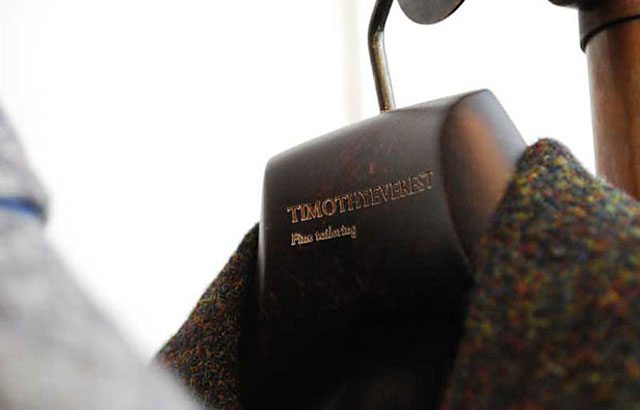 London Tailor #19 – Timothy Everest
There’s nothing Timothy Everest hasn’t done.  He’s created costumes for movies like Atonement, Eyes Wide Shut, and Mission Impossible.  He designed the British Olympic Team uniforms for the 2000 games in Sydney.  He’s dressed celebrities for the Oscars and styled Mick Jagger for the 2011 Grammys.  Everest mixes the mainstream with the outlandish to create bespoke garments that truly celebrate the client’s individuality, and in 2010 Her Majesty The Queen recognized his incomparable vision by awarding him the MBE for services to tailoring.