Rami Malek is no doubt a jewel amongst the stars. As an Egyptian-American actor, his unique looks have brought him much attention in the Hollywood circles, but it’s his acting chops that have really stood out, bringing him to such acclaimed roles in Short Term 12 and Spike Lee’s Da Sweet Blood of Jesus.

In 2015 Malek took on the lead role of a critically acclaimed television series called Mr. Robot, a gig which earned the 34-year-old nominations for both a Golden Globe and a Screen Actors Guild Award.

With his craft secure tightly under his belt, today we’re taking a look at how to mimic the eclectic and versatile look of Rami Malek from street to leisure to the red carpet. Now that’s our kind of triple threat. 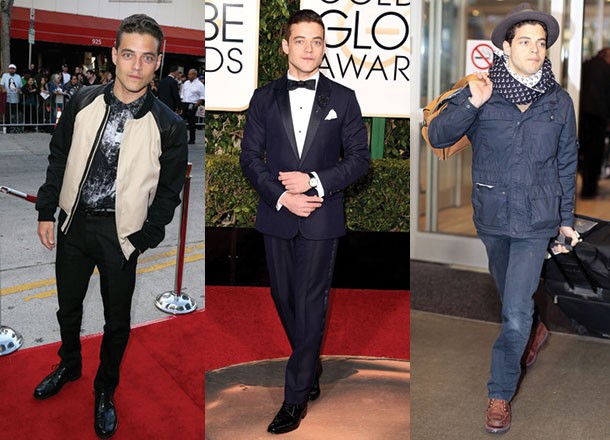 Malek is a relative freshman in the celebrity fashion circuit but that’s not to say he’s no good at it. The steely-eyed actor often takes a classic European approach to his wardrobe which spans from formal wear to street wear to travel threads.

On duty, Malek will rock anything from a classic tux in navy or black, to a finely fitted tweed navy suit. He often plays around with darker colours too, opting for dark army green blazers and patterned dress shirts in black.

On the streewear front, Malek tends to let his personality roam a bit further, going for the urban skater look in a snap back cap, oversized linen shirt, fitted chinos and boots. Throw on a backpack and the 34-year-old could easily pass as a stylish college student.

And then we move onto Malek’s travel attire. North American Winter paired with souther Italian flair? Oddly enough, Malek pulls this off with gusto and confidence.

Arguably one of the best dressed ‘hackers’ in the world right now. 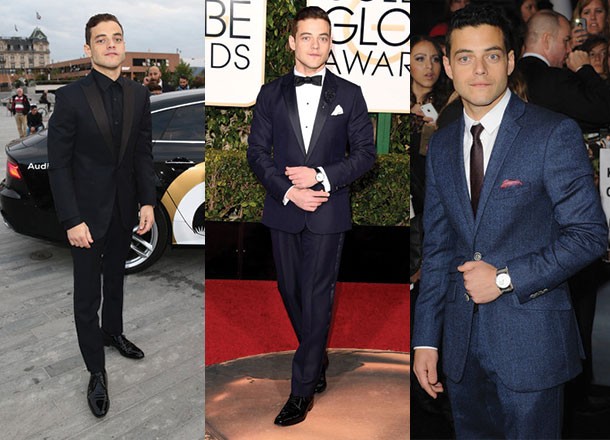 Classic hues and textured fabrics are Malek’s go to wares on the formal circuit. Reserved for press launches and the red carpet, Malek goes for well fitted tuxedos and sharp suits with a sartorial bite. In the suit department Malek pairs his tweed navy suit with a skinny tie and bright pocket square. It’s a more youthful look made more sophisticated with the addition of a big dial watch.

Tuxedos are no-nonsense affairs with Malek following closely with convention, only venturing into darker tones with a black dress shirt. Again, an eye-grabbing watch pairs well with the whole svelte ensemble complimented by a slicked back hair style. 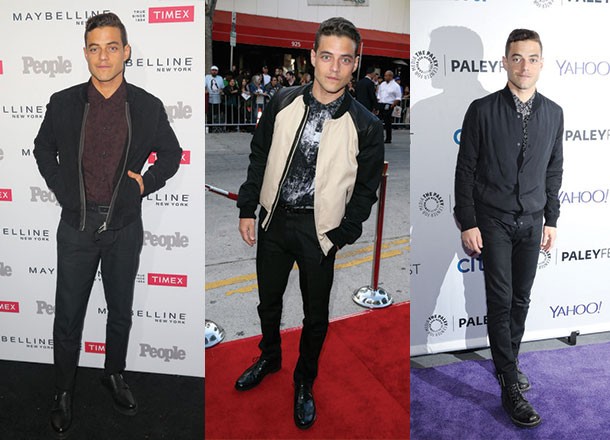 Downtown is where Malek let’s his own expression of style shine a bit more. The varsity jacket is the star’s go-to staple for a laid-back look when he’s still on duty. Be sure to keep the varsity game on rotation by wearing contrast toned jackets thrown over printed polos and dyed shirts.

Shoes are also a key fashion piece for Malek’s look – his dress shoes and boots are always polished. A very big tick. Finally, roll up those jeans or chinos to round out the look with some British street-cred. 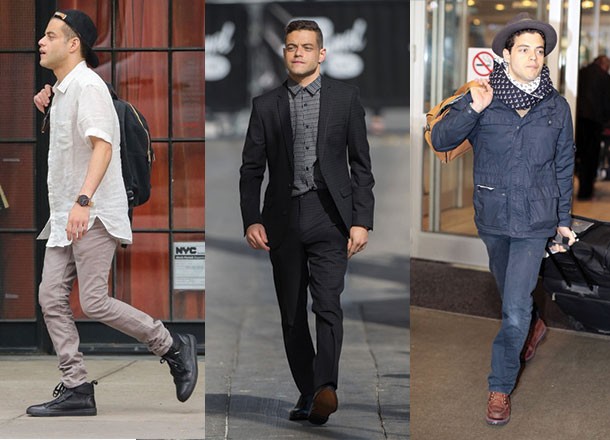 Malek on the move is a showcase of his most versatile styles yet. Taking inspiration from various places, Malek can go from an after-party style suit (sans tie), to a college urban dweller, to one of the most fashionable men you’ll see boarding a plane.

In this case, it’s all about pairing the right pieces to pull off the right look. Colder climates call for heavier pieces. Malek opts for a light down jacket teamed with an over-sized scarf, denim and brown loafers. Top it off with a cool fedora hat and you’ve scored the look of a seasoned passenger of Milan airport.

On the street Malek absolutely owns it, rocking a linen white shirt with rolled sleeves, beige chinos, black sneakers, a snap back cap and a schoolboy backpack. It’s a flawless look for the cool kids who know their streetwear brands.