Anthony Bourdain Reveals His Three Favourite Meals Of All Time 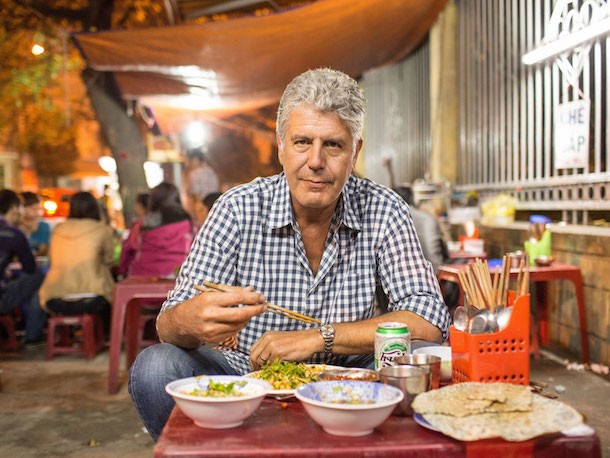 Notoriously outspoken chef Anthony Bourdain does not eat like you or me. While the average man thinks he’s being adventurous by adding sriracha to his meal, Bourdain has chowed down on everything from maggot fried rice to raw seal eye to a still-beating cobra heart.

You want to know where the best food in the world is? He’s the guy to ask. TMZ caught up with Bourdain outside of LAX last September and asked him to name his top three favourite meals of all time. Spoiler alert: it wasn’t the maggot fried rice.

Taking the top spot is Paul Bocuse in Lyon, France. Bocuse is known for nouvelle cuisine – a less opulent (and calorific) take on traditional French cooking that emphasizes the natural textures and flavours of fresh, high-quality ingredients.

In second place is Sukiyabashi Jiro in Tokyo, Japan. Proud recipient of three Michelin stars, sushi master Jiro Ono whips up some of the finest – if not the finest – raw fish in the world. You may recognize the name from the 2011 documentary film Jiro Dreams of Sushi.

And last, but certainly not least, Bourdain proclaims his third favourite meal to be spaghetti pomodoro – ideally in a cracked bowl. Take comfort in the knowledge that one of the most highly developed palates in the world reveres something you could whip up while drunk.