Christoph Waltz Talks Chivalry & Bemoans The Rise Of The Dude

Christoph Waltz is a rare breed of gentlemen, in a world of shirtless one-hit wonders and social media peacocks. “I don’t consider ‘dude’ a compliment,” says Waltz, in his trademark accent, retracing the fall of the gentleman and the rise of dickhead culture in today’s society.

Over the years, Waltz has built a reputation as the renowned go-to-guy for Hollywood villains. Look beyond the cunning Tarantino and Bond facade, however, and you’re faced with an entirely different calibre of man.

Unabashedly poignant, effortlessly thought-provoking, deeply sophisticated. And still one of the sharpest tools in the shed.

As Waltz approaches the age of sixty – in the prime of his career – we sat down with him to chat watches, the meaning of style, life as a struggling actor and his advice for young, up-and-comers in the acting game.

“I think one of the most important qualities of style is discreteness.”

Christoph Waltz is a man on the move. On a brisk winter’s day in Geneva, and having just landed, he is rushing off to the Mandarin Oriental for his next engagement, but not before we could catch him for a face-to-face sit down.

Waltz has given thirty-five years of his life to show business. It wasn’t until 2009, however, that his talent was singed into the minds of mainstream Hollywood, playing the calculatingly and ruthless Colonel Hans Landa in Quentin Tarantino’s Inglourious Basterds. His performance as ‘The Jew Hunter’ saw him score an Academy Award and a Cannes Best Actor Award. Most recently, he played another villain, this time opposite Daniel Craig in Spectre.

Most would find it odd then, that given the rare chance to speak to Waltz one-on-one, none of his iconic movie roles were brought up. Well, that’s exactly what happened to this faux journo with more bar-banter talent than qualifications to his name.

As the ambassador to IWC watches at this year’s SIHH in Geneva, we were curious as to why Waltz chose this luxury watchmaker to partner with. Was it to fulfil again the antagonist role and go against Bond’s personal choice of timepiece?

“Because they asked me,” Waltz laughs. The most evil man in Hollywood can joke, after all.

“I’m not so much into ostentatious watches. I’m into discrete craftsmanship. So it’s not that IWC was the first watch company that approached me. It’s a very traditional and craft-oriented, clear design. Masterful mechanics. And that’s what I identify with.”

What’s more surprising, however, is the fact Waltz rarely wore a watch before partnering with IWC. He does admit that it was through this venture he began to appreciate and wear watches more, but a true practitioner of old-school will always remain adamant on his ideals.

This is a perfect example of how Waltz loves to revel in the understated in all aspects of his life. He’s a seasoned man who’s been around long enough to know the difference between what he likes and what he needs.

Querying him on style fosters a similar affirmation; his outlook on men’s style in particular is both finite and final.

These may sound like industry fighting words from a fiery German, but for Waltz it actually paints a larger picture of today’s male culture. A society, which he thinks lacks chivalry.

That’s not to say he doesn’t make exceptions. One can still be a dude at seventeen, according to Waltz.

So, was the young Chirstoph Waltz ever a ‘dude’ himself, at seventeen? The answer was swift.

“No! I was never a dude. I was not into ‘dudeism’. I think one of the most important qualities of style is discreteness.”

Staunch views such as these are rarely the result of a drunken night’s banter at your local pub. We decided to dig a little deeper and ask what a younger Christoph Waltz was really like and how the man has changed over the years.

As we sit on our massive boardroom table, which makes the spiel feel more like a corporate interview, Waltz glances over at his minder and then at the notepad in front of him before uttering the words which every interviewer fears.

“Am I supposed to take notes? Get him out!”

A silence fills the room for a whole two-seconds and team Australia looked to be blacklisted indefinitely. But then, resounding laughter. We just witnessed firsthand where that prickly Waltz repertoire comes from. Maybe he was in a good mood that day. Or maybe it was just our winning Aussie charm.

Waltz admits that he was never the troublemaker in school. He couldn’t be because he attended a boarding school where his freedom was often limited. Not being the best at studying, but doing enough to scrape by, worked a treat during his formative years. Coming out of school though, his desire to taste the spoils of freedom was still somewhat muted.

Neither a drug-head nor a drunk, Waltz says that he always hated loud music so he avoided the clubs. He tells us that it could also have something to do with his hearing.

“I never felt the need to liberate myself from something. I was never opressed and I just did my stuff and followed my interest. I didn’t abuse my freedom.”

This kind of outlook undoubtedly prepared Waltz for the newfound fame that would be bestowed upon him decades later in Hollywood. As such, Hollywood fame has never phased Christoph Waltz nor has it taken him wayward like many other actors in the industry.

This can be attributed to the fact that for a majority of his thirty-five year career, Waltz walked amongst civilians. Being famous, later in his career, played directly into his hands; as opposed to having it all at the beginning.

“It gave me ample opportunity to taste the other side,” he recalls.

“I kind of understand very clearly, empirically, that it’s not to be taken for granted. It’s a rare exception and that exception is not due to my extraordinary merits. It’s circumstances, which you could call coincidence or luck. It’s not that I did not contribute, but it’s still luck because I contributed thirty-five years prior to that, and it [fame] didn’t happen.”

“But that’s career. There is life beyond career and that’s what makes the struggle to come back to the struggle. To lead a dignified life and try to make headway, career-wise.”

Given his lengthy sacrifice to the craft, one shouldn’t be fooled into labelling Waltz as the struggling actor, who finally made it big in the end. To him, the struggle is all a part of the game, which the press love to romanticise.

“As a young person, you’ll have to have an extraordinarily independent mindset to really avoid the ‘Dickhead Factor’.”

Some of these actors, who are on the rise today, take on this stride with humility. Meanwhile, others fall prey to a phenomenon called the ‘Dickhead Factor’. It’s a common occurrence in today’s entertainment industry, whereby an entertainer becomes instantly famous and proceeds to act like a dickhead about it.

We pitched this concept to Waltz and asked how one can avoid the ‘Dickhead Factor’ when breaking into the industry.

“Very difficult. As a young person, you’ll have to have an extraordinarily independent mindset to really avoid the ‘Dickhead Factor’. Being young is about trying out to the fullest of what it is. You should try that out [and] then understand the consequences, which are inevitable.”

“You being a dickhead is not the problem. The problem is when you’ve reached the end of it and say, ‘Oops. And now what?’ That’s when it starts to get difficult.”

His final words of advice, for those entering the industry on the brink of ‘dudeism’, is all encompassing. His solution is to just be whoever you want to be without taking yourself too seriously. We can attest to that.

At the end of it all, you’d think that Christoph Waltz was single handedly trying to be the modern enforcer of chivalry. A new character called The Dickhead Hunter, perhaps. This could not be further from the truth.

If he was ever the gentlemen himself, he wouldn’t actually know.

“There are certain things I agree with. The fact that time moves on and the world develops, but that doesn’t mean the standard has to drop. In our world it does and I very much object to that. The standard with the options and possibilities of today should have risen. But it didn’t.”

“Look at America. Are they all insane? I have an answer to that. Yes, I live there.”

Insanity can be influential and powerful in today’s fast-paced world. For now though, Christoph Waltz is content just being the modern day gentleman amongst a pack of dickheads.

Luc Wiesman covered SIHH 2016 as a guest of Richemont Australia 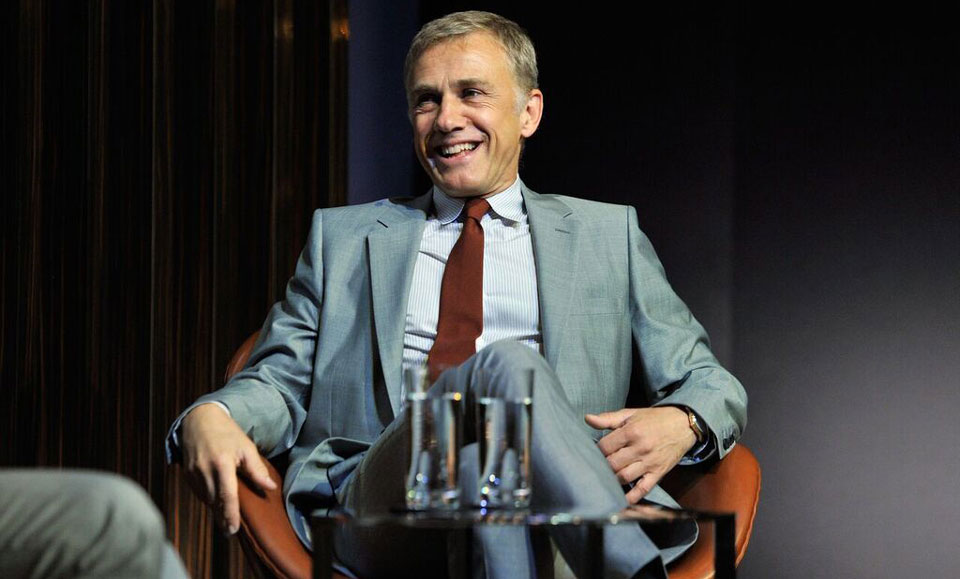 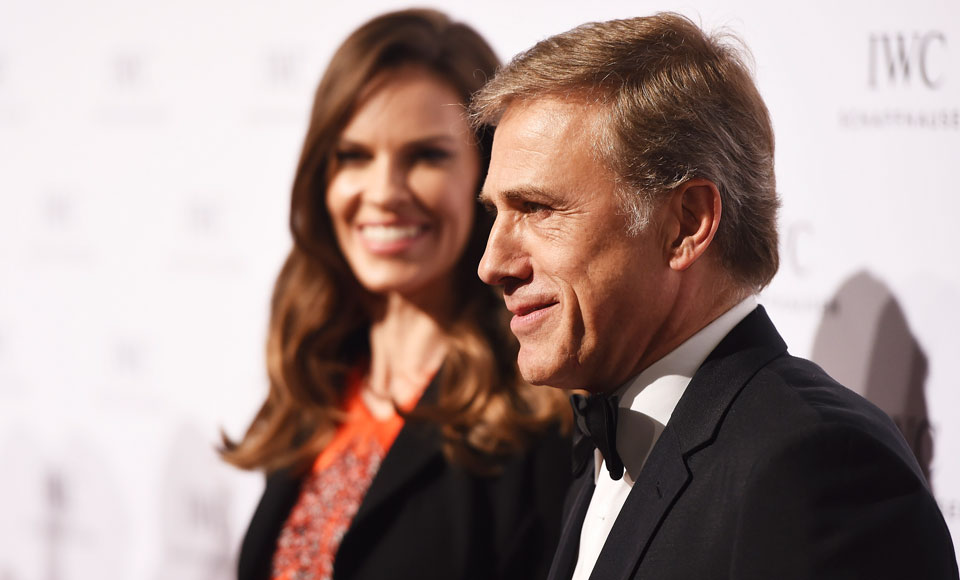 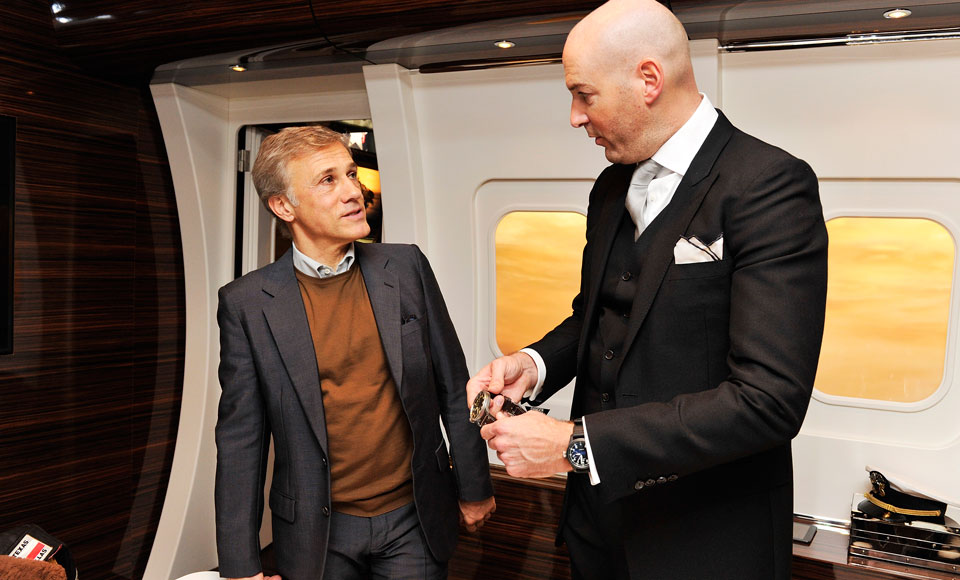