What An Everest Climber Wish You Knew 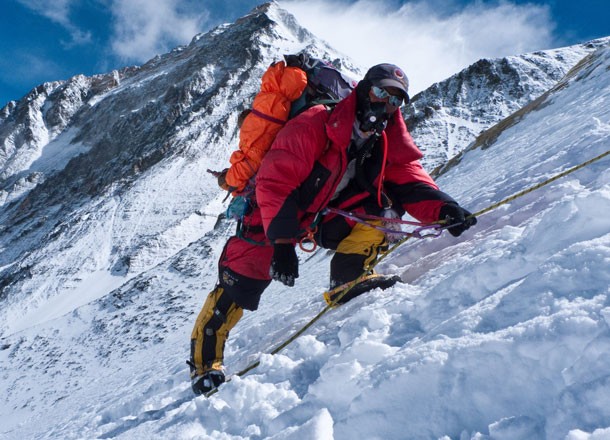 There are few things more demanding, exhausting and all-encompassing than climbing some of the biggest peaks in the world. Yet Aussie adventurer Peter Wells has done just that. Aside from paddling from the Australian mainland to Tasmania and attempting to summit an unclimbed peak in Nepal (where an ice cliff gave way right in front of him), he’s one of the rare few who have ascended beyond the clouds to summit Mt Everest and returned to tell the tale.

A staggering achievement indeed – just consider those harrowing scenes from the 2015 film Everest, which told the story of one such perilous journey from 1996. Here, Peter shares what he’s learned…

I knew I wanted to attempt an 8000-er (there are only 14 mountains in the world that stand over 8000 metres tall), to experience it and see whether I could do it. I wanted to do it someday, perhaps in 10 or so years or some vague timeframe. Then I changed my approach and decided to make it happen. I worked and saved the money, trained hard and booked my leave.

In September 2005 I travelled across the Tibetan plains to attempt to climb the world’s 6th highest mountain – Mt Cho Oyu, located near Mount Everest. It changed my life. There were the hard times – the first night at Advanced Base Camp at 5800m my head felt like it had nails driven into it, a result of the body not yet having acclimatised to the extreme altitude. It took a month to climb the mountain. You can’t see Mt Everest from Mt Cho Oyu until the very summit. I gasped as the sheer faces of Everest appeared, before it disappeared in the clouds. My imagination had been stirred beyond belief. This may never have happened had I not bitten the bullet and decided to bring my goal to the now rather than waiting to someday, some time.

Check In With Yourself

Climbing through the icefall on Mt Everest can be a harrowing experience. You cross ladders over yawning crevasses where you can’t see the bottom. Massive ice seracs, some five storeys high, lean over you as you meander through this frozen maze. Time is critical – you’ve got to get through the icefall before the sun warms and softens the ice, causing these mansion-sized ice towers to crumble. Once, I heard a piercing crack and a rumble and realised a serac had tumbled somewhere above me. As I leaned into the mountain a sheet of snow flew over me and disappeared into the depths below.

Everest was full of moments like this; I learned quickly that to live in a constant state of anxiety was not going to help. Being alert yes, but anxious no. Instead I adopted a technique where I would ‘check in’ with myself if I was feeling anxious or exhausted. Was I warm? Am I safe right now? Right now, am I okay? If the answer was yes, then there was nothing to worry about and it released me to take in my surroundings and appreciate where I was. This was particularly useful on the return from the summit. I had summited at 5.19am and now, in the afternoon I was descending the Lhotse Face – a huge, steep wall of snow and ice. It was easy to feel beaten and anxious about the descent, but on appreciating that I was warm, safe at that moment and therefore okay, I continued the descent with a new perspective and enjoyed the most amazing view of the jagged peaks of the Himalayas below me.

Regret interrupts the flow of things. My line of thought is that, so long as we acted in good faith at the time and with best intentions of what we thought, then what will be will be and we can’t change what comes out of that. And you learn as you go, that’s part of life. The Japanese concept of ‘Kaizen’ (continuous improvement) resonates with me. If someone can review the outcome of their approach to something and apply it later it serves not only to improve their interaction with the world but can assist them to move on.

Don’t Ignore Who Inspires You

I’ve come to learn that who inspires you, or who you are in awe of, is a pretty good indication of who you want to be and what you want to achieve. I was never going to meet George Mallory – he was never seen again after climbing into the clouds on Mount Everest in 1924, until his body was discovered in 1999. But I have a library of books on his life and climbs and adventures. I was so excited to meet legendary Australian climbers Greg Mortimer and Lincoln Hall, Andrew Lock and even Peter Hillary in an airport in Kathmandu. But I was not only in awe of the heroes known for their pioneering efforts, but anyone who’d attempted any of the big mountains. I would ask and listen to every situation they’d encountered.

Every interaction with these inspiring people thrilled me and fed my motivation. My sense of awe, in a sense, is my compass. I just came off shooting a documentary flying to the top of Australia in a little Cessna 172. I was inspired by the pilot and how she flew that little plane, and I’ve signed up for lessons.