Science Reveals The Perfect Age To Get Married

If you’re a romantic and still believe in love or just think the divorce rate of 1 in 3 is a load of bollocks then you should probably start speeding up your hunt for marital bliss.

A study, conducted by University of Utah sociologist Nick Wolfinger, suggests that people who get married between 28 and 32 split up the least in the ensuing years. This contradicts sociologists’ former belief that waiting longer to say ‘I do’ usually led to more stability.

Wolfinger came to the conclusion by analysing data from 2006-2010 and the 2011-2013 National Survey of Family Growth, during which he found an upside down bell curve. 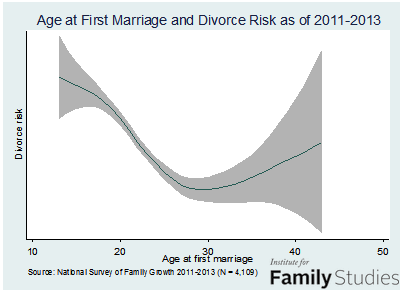 It’s been coined the ‘Goldilocks theory’: you have to be not too young and not too old to succeed in marriage. The ‘upside down bell curve’ even persists “…after controlling for respondents’ sex, race, family structure of origin, age at the time of survey, and more.”

Plenty have gone against Wolfinger’s claims, like the University of Maryland’s Phillip Cogen who suggests that getting older didn’t mean your marriage had less chance of survival. According to his analysis, the perfect age to get married if you don’t want it to end in tears is 45-49.

What do you think is secret age to success?