How To Get Justin O’Shea’s Style

Justin O’Shea is a man who takes his fashion business seriously. Often credited for driving e-tailer mytheresa.com into the luxury stratosphere by raking in $130 million in annual revenue, O’Shea has quickly proven himself an asset to the global fashion scene.

It is however on the streets where this Australian really excels. Unlike most fashion icons of today, O’Shea rocks tattoos, is buff and has a signature beard which makes him instantly recognisable in a refined Conor McGregor kind of way.

As the newly appointed creative director of Italian label Brioni, O’Shea will seek to bring a fresh outlook on how to do business in the digital era of fast fashion (he has no formal training as a designer but does have 83,000 Instagram followers). In celebration of his recent achievements, we’re taking a look at how to get Justin O’Shea’s style. 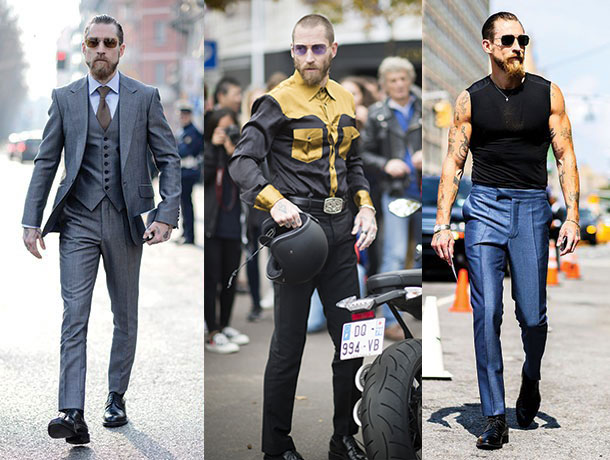 Justin O’Shea is a fine purveyor of ultra sharp suits, regal coats with impeccable detail and the ultra masculine tank top. Given his job in fashion, he can often afford a diverse range of looks with these three ensembles being the most notable. From a sharp three-piece suit to a genre clashing tank top-business combo, this is Justin O’Shea fashion at its prime – tattoos and biker beard included. 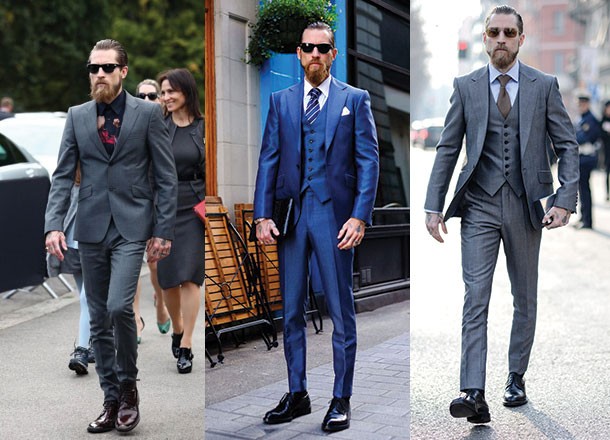 O’Shea is no stranger to a finely cut suit. When he opts for one, it’s usually a three piece in classic herringbone grey or a much louder colour such as an electric blue or violet. O’Shea is a tall guy with an athletic build so it’s important that he also opts for tailored pieces to get the fitment just right for the street snappers.

Follow in O’Shea’s sartorial footsteps by adopting rockstar statement shirts under a conventional coloured suit to add some attitude to your outfit. For business duties, keep things simple with solid colours with contrast ties in either striped or classic hues.

It’s also important to note the shine from O’Shea’s shoes whether it be in shades of black, brown or burgundy. Keep it neatly polished and the doors will open for you. Sunglasses are also mandatory to round out the signature O’Shea look. 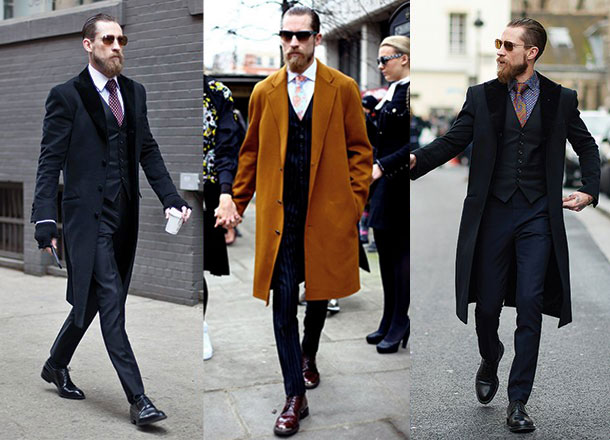 The master of fine coating doesn’t let his style game wane even when it’s below zero degrees. In fact, he gets better at it. For a walk on the wild side, go for a Persian print coat layered over a black vest and shirt with contrasting tie.

The key to this look is to keep the inner layers neutral so that your coat becomes the statement piece. The tie and shirt are just there to complement it. If wild coats aren’t to your taste then go down the black route which has a cleaner effect and let’s the undergarments do the talking.

Mismatched coloured trousers can also work in this outfit so long as they’re dark enough. Throw in a pair of fingerless gloves and you have yourself a modern day hit man with charisma. 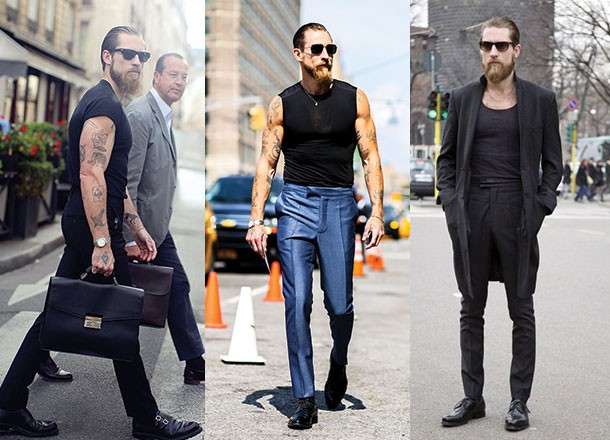 The classic men’s tank top needs no introduction. Starting life as bathers in the 1920s, the black and white tank top has quickly made its way into one of O’Shea’s signature looks with his muscular arms and tattoos taking centre stage.

The combination of his sartorial flair juxtaposed by his rockstar/biker tattoos is what sets O’Shea apart from the fashionista crew. It exudes tough guy charm and this is portrayed most through this combination of garments.

Follow in O’Shea’s footsteps by pairing them with statement dress pants, designer trousers and dress shoes in double monk or classic derbys. If you’ve got the muscles and tattoos then it’s time to put on a gun show.

For a more contemporary look, keep the tank top tucked into the pants and throw over a textured coat if things get chilly. This is one of the coolest looks you can borrow from the Justin O’Shea fashion bible where business down below meets the party up top.