Study Reveals That Men Only Want To Wear Black 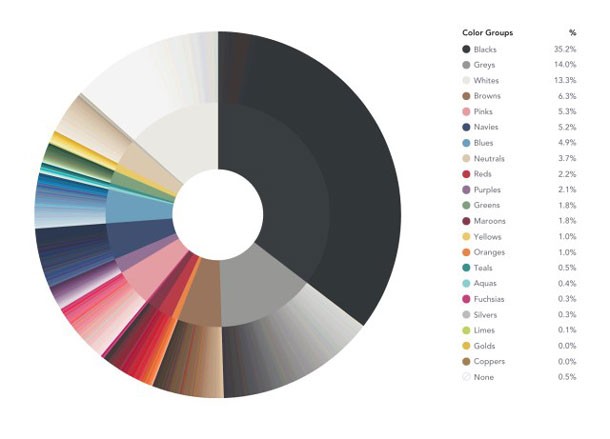 Edited’s data found that the ‘top movers’ in unit volume of colour groups from March 2015 to February of this year were blacks with 35.2% market share, followed by greys with 14%, whites with 13.3% and browns with 6.3%. Even in comparing the data from the year prior, black clothing still dominates a huge portion of the market share with 33%. Lowest on the list was neutrals at 3.7%, reds at 2.2% and purple at 2.1% (no real surprise with that one).

But with so many bright and colourful prints and patterns trickling down from the menswear runways of Fashion Week and beyond, why is there such a disconnect between what is ‘trending’ in colour, and what we are all actually willing to wear?

It’s an issue that has apparently frustrated merchandisers who often complain about a lack of colour, yet when measured in unit volumes, dark and muted colours in men’s (and womenswear) is always what sells the most.

“Magazines need fresh content, so they’re going to report on the most interesting and ‘newest’ trends from the runway,” Edited’s senior retail and fashion analyst, Katie Smith said. “Sure, there may be a captivating red story coming through, but in terms of runway volume, there’s undoubtedly more navy. It just doesn’t make for such a sexy story in fashion mags. And as a consumer, do you want to be reading about stuff that you’ve already got in your wardrobe? Probably not.”

Smith said (while it’s a point of frustration), merchandisers and retailers are “very attuned” to consumer’s wants and needs and know that fresh ‘new season’ pieces aren’t going to sell as well as the consumer favourites of black, grey and dark blues. “That’s a retailer’s secure zone – the bread and butter of the business.”

The disconnect isn’t just associated with colour, either. Apparently, patterned pieces are proving just as difficult to move off shelves. Clearly, black is the new….black and, it’s here to stay.

RELATED: How To Rock Masculine Colours This Spring (And Not Look Like A Rainbow Trout)