Smart Guns Are Here, But No One Wants To Buy Them

Smart guns got a publicity boost in January, when President Obama advocated their potential as part of his emotional speech in the wake of the San Bernardino mass shooting, and the San Francisco Smart Gun Symposium aimed to capitalise on that. 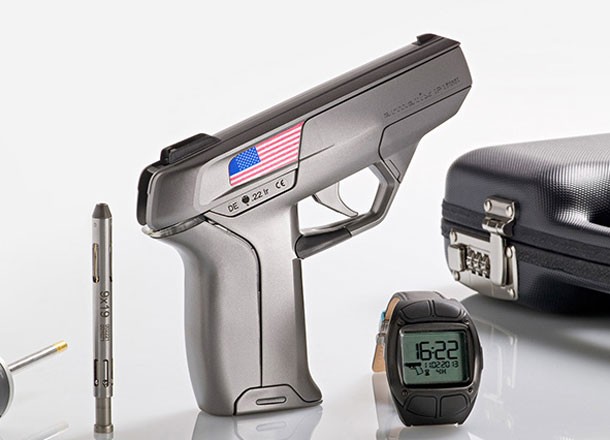 It assembled some big names for its press conference: like San Francisco Police Chief Greg Suhr, gun violence and public health expert Stephen Teret, and Silicon Valley angel investor/lightning rod Ron Conway. Conway’s investments read like a who’s who of Silicon Valley, but it’s his passion for gun control (he’s on the board for Sandy Hook Promise) that brought him to the press conference. Unfortunately the press conference was big on names and low on results.

It mostly boiled down to: smart guns are coming. Eventually. Probably. And no one wants to buy them.

Conway used the opportunity to introduce developers funded by his Smart Tech Challenges Foundation — an NPO developed to promote gun safety. Of particular note was 18-year-old Kai Kloepfer, who was presented by Conway as “the Mark Zuckerburg of smart guns.” Kloepfer presumably earned the totally cool and not at all bizarre name due to his being young and tech savvy, but the fingerprint scanner he’s incorporated into a gun doesn’t really scream Facebook.

Smart guns are weapons that utilise technology (like Kloepfer’s fingerprint scanner) to prevent an unauthorised user from firing them. At the press conference, “personalised guns” and “childproof guns” were also used to describe them.

Smart handguns make sense in certain scenarios. If someone with small children wanted to keep a gun in his or her home, and maybe didn’t keep that gun locked up properly, and the gun got into the wrong tiny hands … it wouldn’t be able to accidentally, tragically, go off. According to a handout from Washington CeaseFire, one of the organisers of the symposium, the Brady Campaign approximates that 1.7 million American children live in homes where there are unlocked, loaded guns.

There’s also the issue of stolen guns being used in violent crimes, and of suicides being committed by people who’ve somehow obtained a weapon that doesn’t belong to them. “Guns won’t go away, and we’re going to have to deal with that reality,” noted Washington CeaseFire’s Ralph Fascitelli.

While Kloepfer and the other developers toil away on the technology, smart gun proponents are focusing on an issue greater than any inventor’s challenge: who is going to buy these things?

The current push is to put the technology into a handgun. It makes sense, handguns are a major chunk of gun sales, but according to symposium participant Jonathan E. Mossberg, creator of the “iGun” shotgun (which he said works just fine) there’s “no market” for their smarter cousins. And Ernst Mauch, who developed the Armatix iP1, said he didn’t know how well his own product was selling.

So much of the press conference was consumed by more practical questions:

They also discussed Mauch’s iP1 pistol. It’s one of the few smart guns currently available on the market, but it’s only active when it’s connected to the company’s “Smart System” radio-controlled watch.

The watch element was a major sticking point. It could, presumably, be used by someone who wasn’t the gun owner to make the gun fire. That’s why the iP1 didn’t meet the standards of what NPR calls an “obscure” New Jersey law, passed in 2002. It’s simple, but obviously controversial:

Once “personalised handguns are available” anywhere in the country, all handguns sold in New Jersey must be smart guns within 30 months.

The law itself has been making gun control activists more than slightly nervous. Though the press conference, which was obviously extremely pro-smart guns, didn’t dig too deep into that part of the issue, it’s a big part of why gun enthusiasts, the National Rifle Association among them, are suspicious of the smart-gun cause.

Within this optimistically pro-smart gun environment, SFPD Chief Suhr chose his words carefully when asked if he’d support a smart gun pilot program on the force. He pointed out that San Francisco had four murders committed using stolen guns in 2015 — including the headline-grabbing random shooting of Kate Steinle, who was killed by a gun taken from the car of a U.S. Bureau of Land Management ranger.

But he also noted that he wasn’t against offering the option to his officers, if they wanted to participate. “We have so many officers who are into technology, I am all but certain there are officers that would be willing to do such a pilot, provided that we could all share magazines.”

“There is no quick fix,” Smart Tech Challenges Foundation director Hirsch said, and she’s right. Even if flawless, 100 per cent reliable smart-gun technology is ever achieved and is way more effective than, say, the iPhone thumb print ID, which is not something anyone would want to rely on in a life-or-death situation — there will still be plenty of human hurdles to cross.

Like who the hell will buy the damn things.