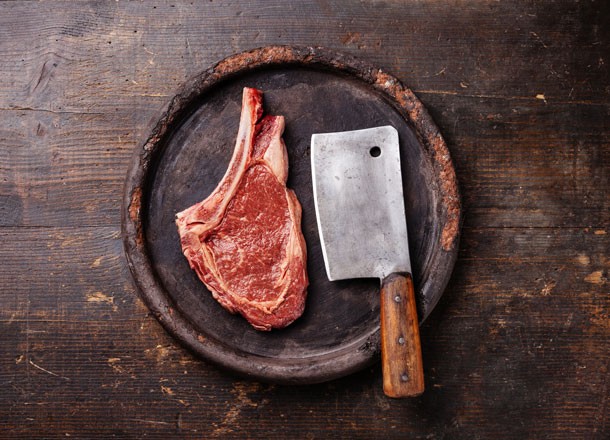 If you’re a vegetarian we suggest you block your ears for this one. A new study has found that not only does preparing and eating meat come naturally to humans, but without an early diet that included generous amounts of the stuff, we wouldn’t have become human at all.

There’s no denying that a plant-based diet can be healthy, varied and is an important part of that food pyramid you were taught about at school, but this study in ‘Nature’ conducted Katherine Zink and Daniel Lieberman of Harvard, suggests that without discovering meat we mightn’t have evolved to become the modern, verbal and intelligent humans we are today.

Apparently, it was 2.6 million years ago that meat became a significant part of the pre-human diet. Fruits and vegetables were a common staple, but the best kind were underground root foods like beets, yams and potatoes. While these kinds of vegetables were packed full of nutrition, they were difficult to chew and weren’t exactly ‘fine-dining’. In fact, for proto-humans to survive they would have to go through up 15 million “chewing cycles” a year. Ain’t nobody got time for that.

RELATED: Steak Out Sydney: 8 Places To Get Your Meat On

According to the study, that’s where the need for meat came into play. Prey that had been killed and then prepared by either slicing, pounding or flaking provided a much more calorie-rich meal that required less chewing than nasty root foods.

Eating meat apparently nourished our nutritionally demanding brains, and while animal muscle eaten straight from the carcass required ripping and tearing, when we learned to process our meat we could do away with sharp teeth and strong jaws which may have led to changes in the skull and neck in favour of a bigger brain, better thermoregulation and more advanced speech organs.

Today, opting for a kale salad is far more trendy and potentially better for your health than chomping down on a sirloin steak, but if you ask our ancestors, meat is the way to go.