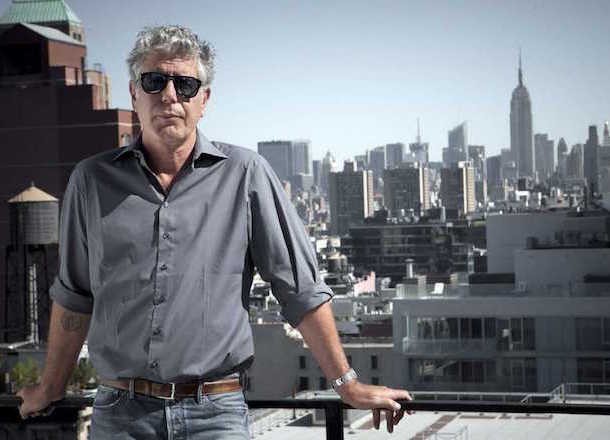 Where do you eat when you’ve eaten pretty much everywhere? Anthony Bourdain has travelled the world and noshed on things the average man can only dream of, but there’s something special about coming home.

The Daily Beast sat down with the famed chef to find out where he likes to eat when his international adventures bring him back to his original stomping grounds: New York City. Here’s what he said.

“I’m going to get bialys and a pile of chopped liver and smoked salmon and some cream cheese, maybe some sturgeon, and maybe some fish eggs – and I’m just going to go berserk.”

“It’s the most fun restaurant in New York. The food is just delicious. It doesn’t take itself too seriously.”

“I’ll go to Morini for a bowl of pasta, or if I really want to blow it out I’ll go to Marea, but just for the pasta. Not that the fish isn’t magnificent, but I’ll go in and eat three or four different pastas.”

“Chances are, the first thing I’m doing when I get back if I’ve been away for 12 days – I’m exhausted, I’ve flown from Japan or South America and I arrive at my apartment and I’m just destroyed – I’m calling Seamless to get me some Shake Shack.” His order at the burger joint? A double cheeseburger naked – no lettuce, no tomato, no nothing, just cheese and two patties on a potato bun.

Hungry for more? Here are Anthony Bourdain’s top three meals of all time.