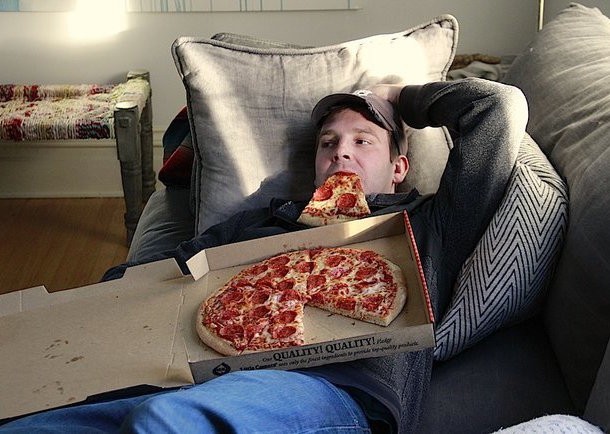 Every man, at one time or another, has wondered what women want and wished science could provide an easy answer. This? This isn’t that answer, but who can resist the potent combo of science and pizza?

Researchers at Cornell University studied the eating habits of men who ate with other men compared to those of men who ate with women. They observed 133 adults at an all-you-can-eat Italian buffet over a two-week period. At the end of the experiment, the team concluded that, when men eat in mixed company, they consume a whopping 93% more pizza than if they eat with other men.

What’s the deal with the overeating? Are women secretly into expanding waistlines? Science says stuffing your face is actually a way to demonstrate masculinity, thereby proving that you’re a desirable mate. Men eat excessively to show that they “possess extraordinary skills, advantages, and/or surplus energy in degrees that are superior to other men,” says the study.

Women are hardwired to consider ‘overcoming risk’ an attractive evolutionary trait. “Conspicuous consumption of food is a much less dramatic ‘risk’ than, say, going off to the front lines of war,” writes the study, but “research on the effects of obesity nonetheless shows overeating to constitute risky behavior.”

We have doubts about dates being impressed by cheese between your teeth and sauce dribbling down your chin, but who are we to fly in the face of science?