An Exclusive Look At Designing The World’s Fastest Sedan 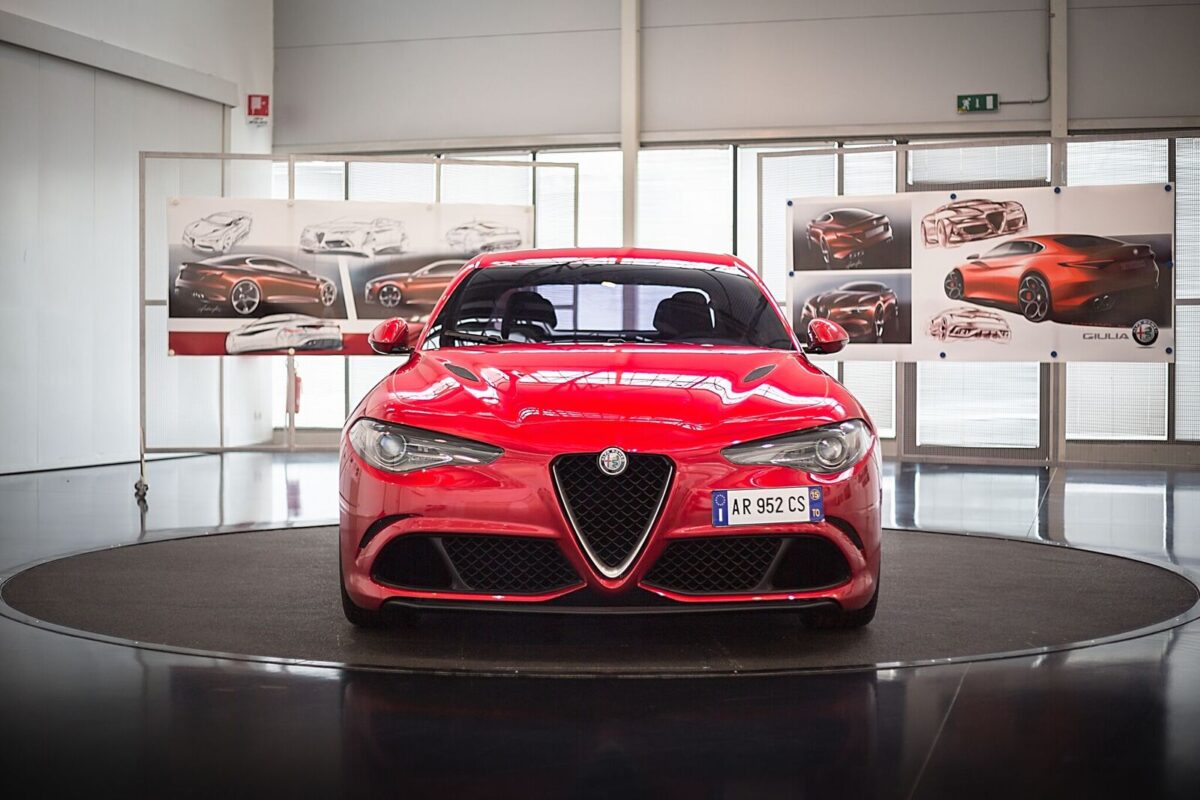 The following article has been produced in partnership with Alfa Romeo

Laying claim to the world’s fastest sedan is no easy feat. This year Alfa Romeo stepped up to that challenge and proved that it could be done when it lapped the gruelling Nurburgring in record time, beating out its closest rival by a full six seconds.

What does is take to build a four-door super saloon like the Alfa Romeo Giulia? We went behind the closed doors of the fabled car maker to find out.

Klaus Busse has only been at Alfa Romeo for six months but one would be foolish to assume this eloquently spoken German is a novice amongst the hallways of the fabled Italian marque.

Hailing as a top designer for Fiat Chrysler Automobiles in Detroit, Busse last year left Motor City in search of greener pastures in Europe. He eventually landed the top role of Head of Design for Alfa Romeo, Fiat, Abarth, Lancia and Maserati.

In the short period since he’s been there, Busse has shaken up the European performance car scene with the latest Alfa Romeo Giulia coming to life under his careful watch.

The controversy, it would seem, is that we have a German in charge of designing Fiat Chrysler’s most exciting cars to date. Cars destined to take on competition in the form of German performance cars.

Crisis of identity? Perhaps. But more importantly we wanted to know what Busse plans to bring to the game as the new driving force behind a heritage carmaker. Here’s what he had to share with us in the world of Alfa Romeo design secrets.

To Busse, Alfa Romeo has always been a brand which he dreamt of working for as a kid. It has something to do with the signature Italian lines which can only be understood by physical touch rather than a conventional eyeful.

More importantly though, Busse says that his new design role comes from a place of pride driven by his peers from other European carmakers who are watching his moves carefully. And when the competition is watching, you simply deliver the results that are most likely to stun.

“You work at Alfa Romeo and we’re all affected by Alfa Romeo.”

If this isn’t enough to convince a man to prove his worth then nothing else is. Busse is in this game to make waves in a modern era of Italian automotive design.

Bringing a rich heritage of Italian design into the modern era of car making is no easy feat. To get acquainted with the brand on a deeper level, Busse headed straight to the Alfa Romeo Museum to connect with the brand’s iconic cars of yesteryear.

“We’ve all seen Alfas, all individual ones but it’s quite an impact when you see them all condensed in the one time and place,” he says.

“Suddenly you see a pattern; the rhythm, the beauty, the sculpture and the visual lightness of the cars.”

Busse is a diplomatic leader though. He is quick to point out that the final result is only as good as his team’s efforts, admitting that he’s still learning himself.

“It’s a democratic debate and discussion. We get together as a team with people who have been wirth Alfa for 20 years and people as fresh as myself and we have beautiful discussions about where we want to take the brand.”

Where the brand is heading under Busse’s guidance is towards a resurgence in cars which demand envy from onlookers and smiles from drivers.

Achieving this involves beginning with a goal as a team. Even before the sketching starts, Busse brings together his teams under product planning, branding and engineering to define what they’re trying to do.

Three recurring criteria always comes into play at these discussions: 1] The car, 2] the proportion and 3] the performance.

“We talk about what can we do to elevate the brand of this product,” explains Busse.

“Rather than just doing a product in isolation, we think about how it fits into our vision of where we want to take the brand visually.”

According to Busse, even images which have nothing to do with Alfas are encouraged. This is an exercise in inspiration and the man says that it can only be done right when there is debate. Once the points have been ironed out, a clear vision of a car will almost begin to design itself.

“What you do then is put the pen down and execute it in a process which can take 2-5 weeks.”

“From there we go into 3D and start designing the car knowing that it’s going to be something amazing.”

Make no mistake, Busse is calling the new Alfa Romeo Giulia a “performance machine” – something we discovered first hand when we got behind the wheel of one at the car maker’s hometown of Milan earlier this year.

This performance aspect of the car has always been typical of vintage Alfa Romeos but for the modern era Busse says he wanted to bring that essence back by targeting a certain vision and expectation in regards to performance.

These vehicle parameters he’s referring to include short overhangs and a solid planted look on the road. The second phase which ticks the performance box is in the heavily sculpted body.

“We refer to art, the human body and beautiful objects but at the end of the day we condense it into a single object to become a true Alfa Romeo.”

“Hence, the sculpture, the proportion and performance goal make the Giulia part of the Alfa family.”

At the end of the day, driving emotions is what the new Giulia is really about. Busse and his team have aimed for a very unique performance saloon worthy of taking on the world’s best and it’s about time they proved it with the Giulia.

Busse swears by his words when he says that punters will be amazed by the performance of the car whether it’s in the base model or right up to the menacingly beautiful Quadrifoglio.

Photography produced exclusively for D’Marge by Rosario Liberti – No reproduction without permission. 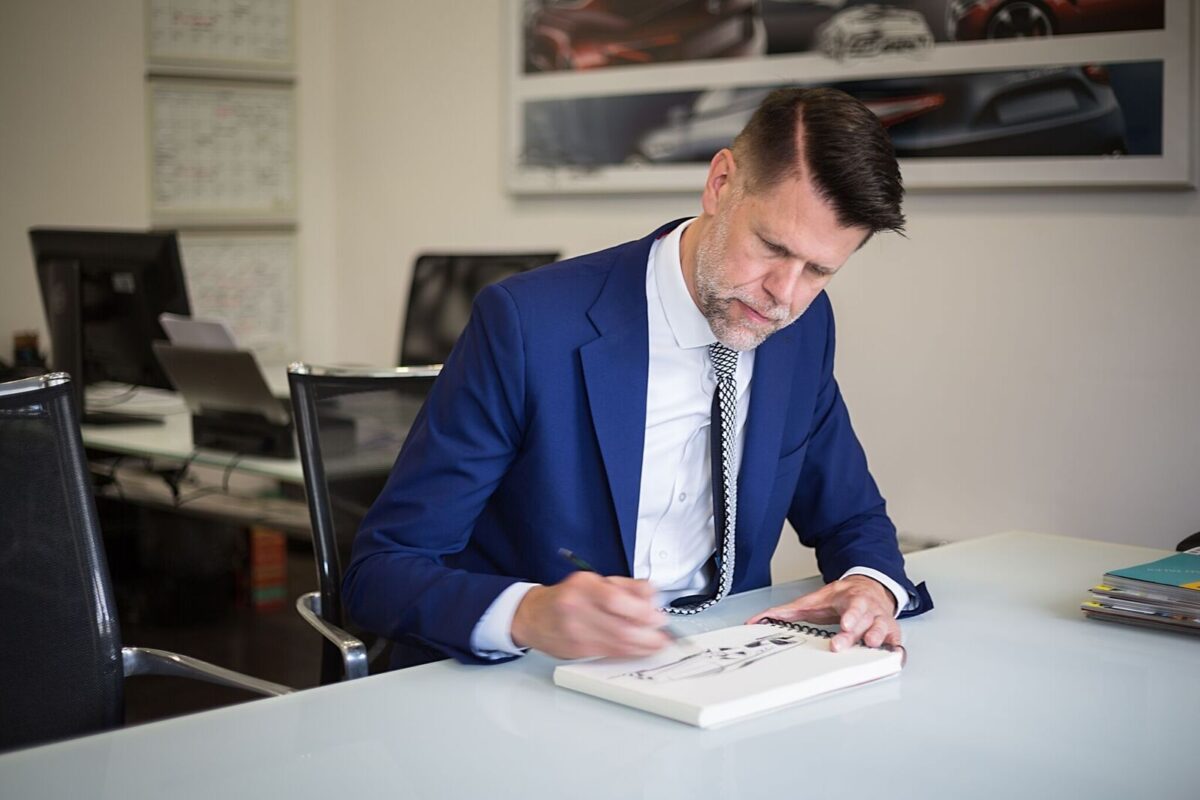 2 of 17
Head of Design for Alfa Romeo, Klaus Busse 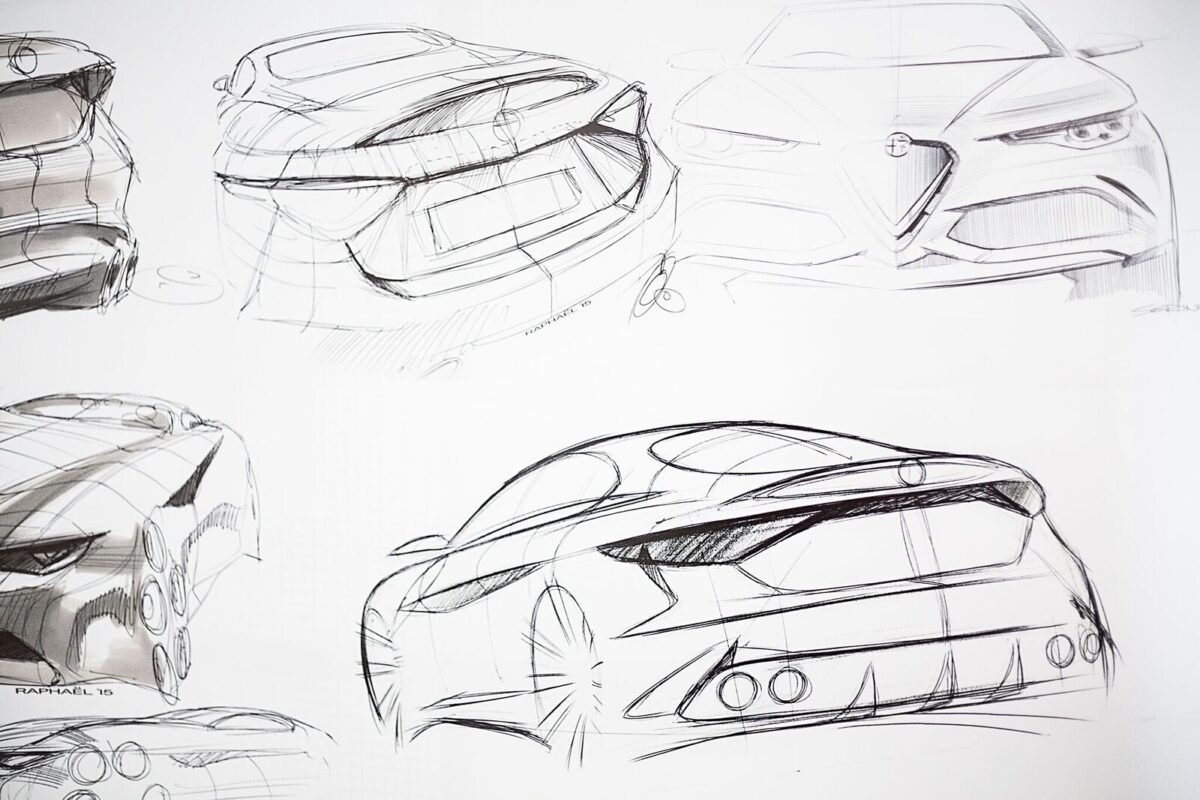 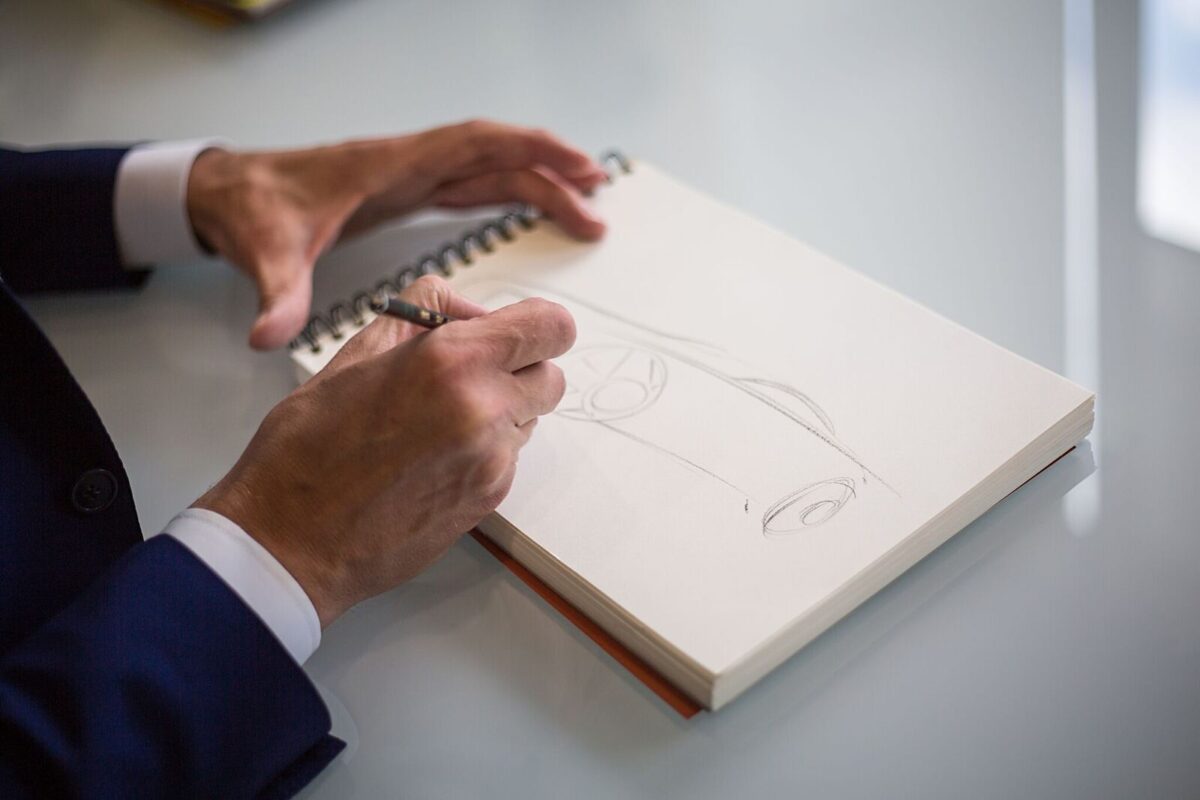 4 of 17
Klaus doing a quick sketch 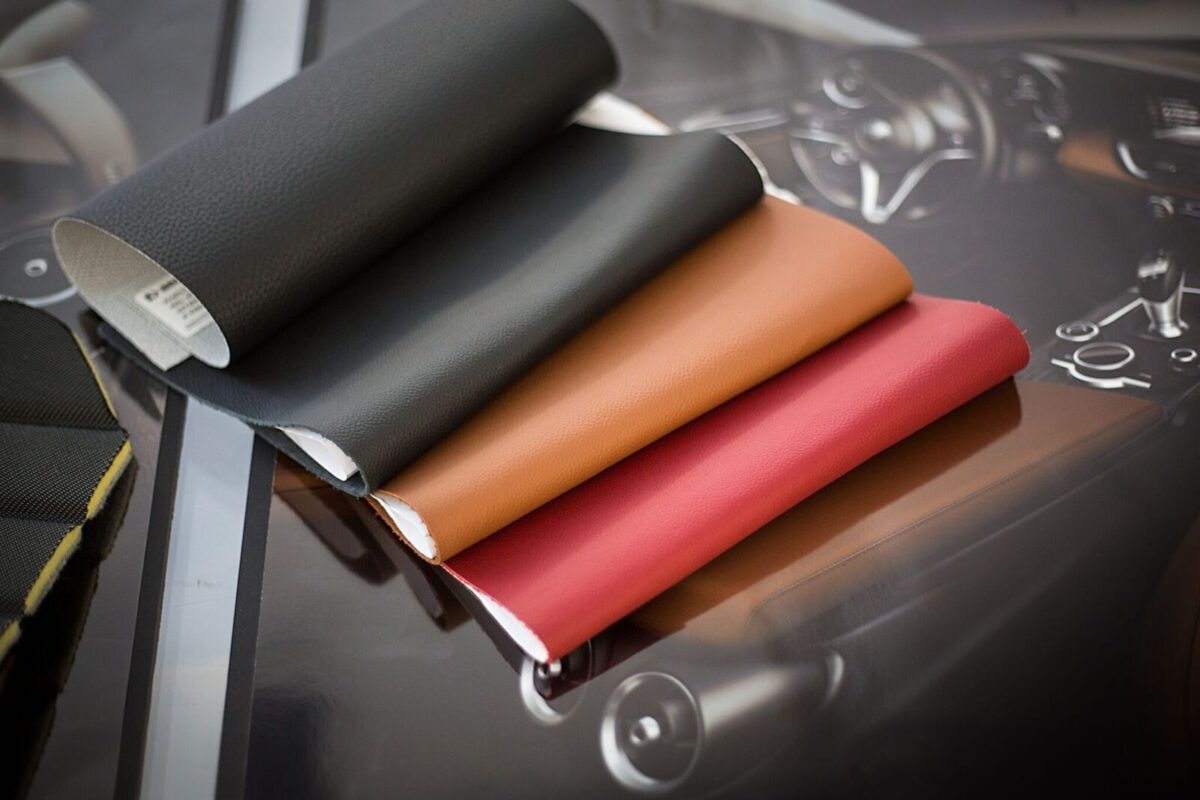 5 of 17
Leather finishings in the Giulia 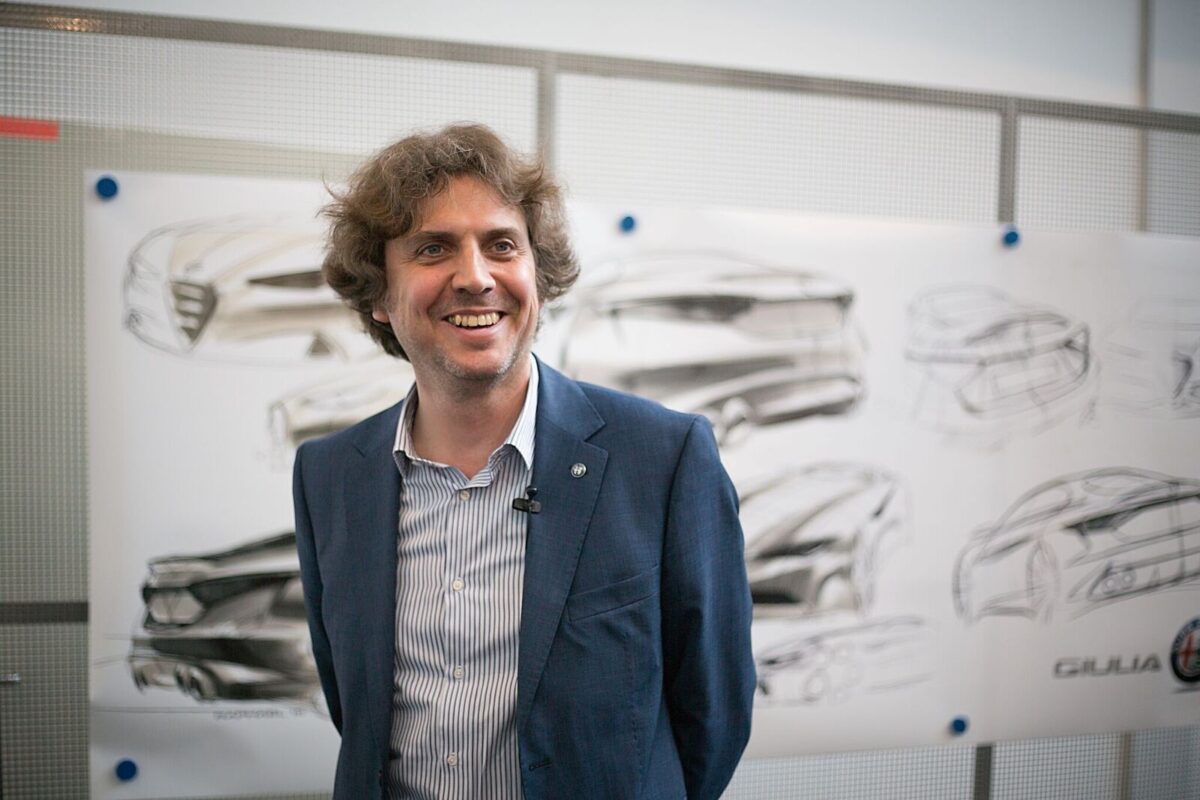 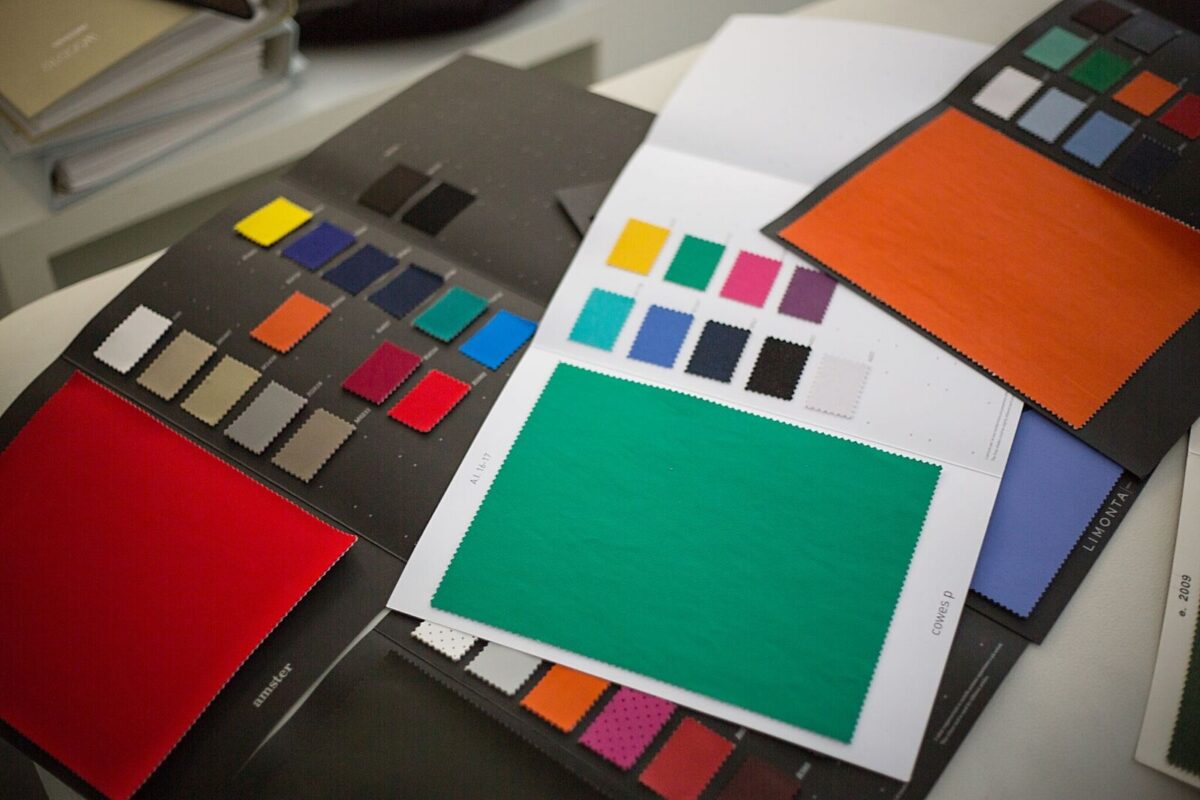 7 of 17
Swatches for exterior colours 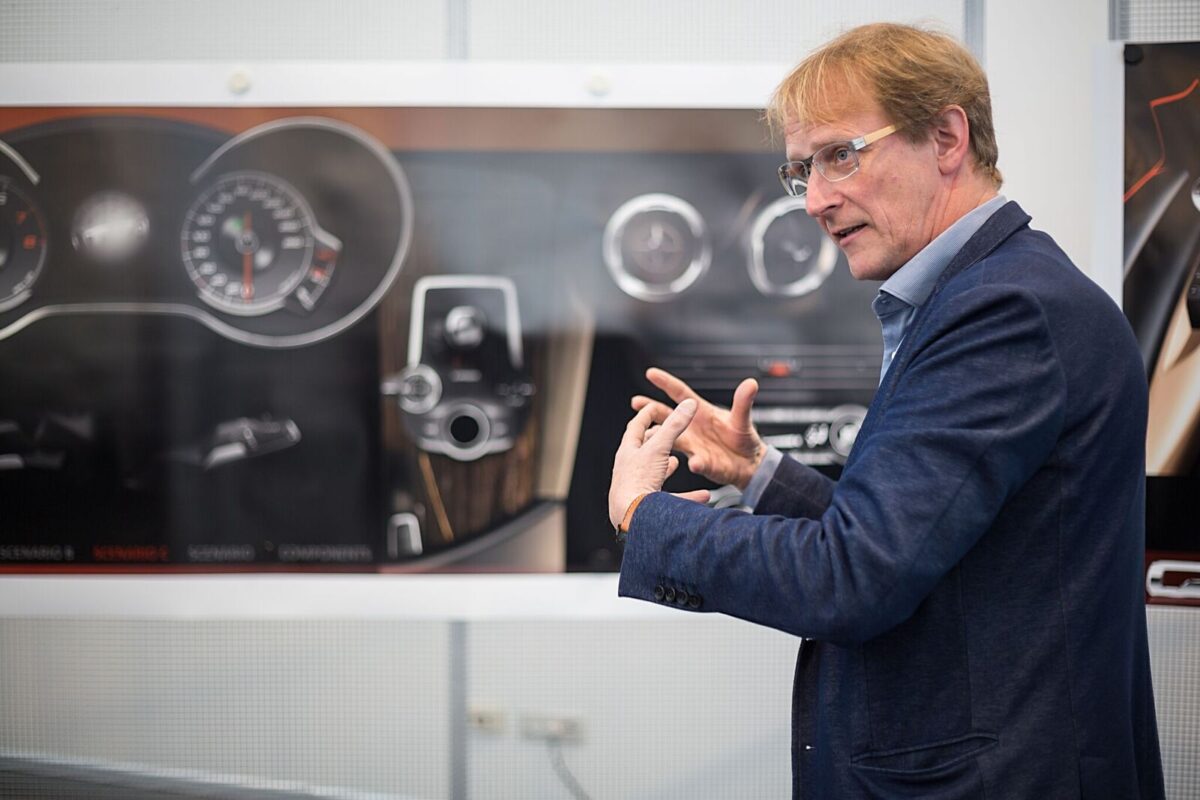 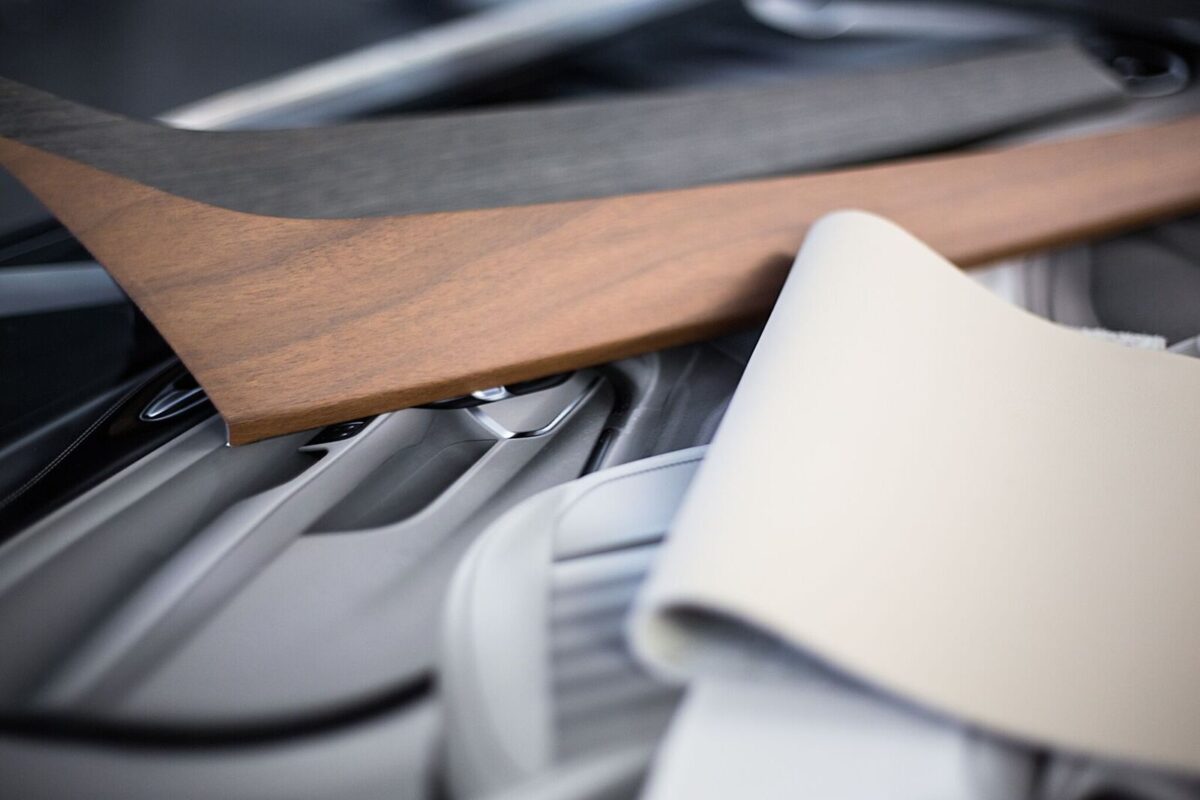 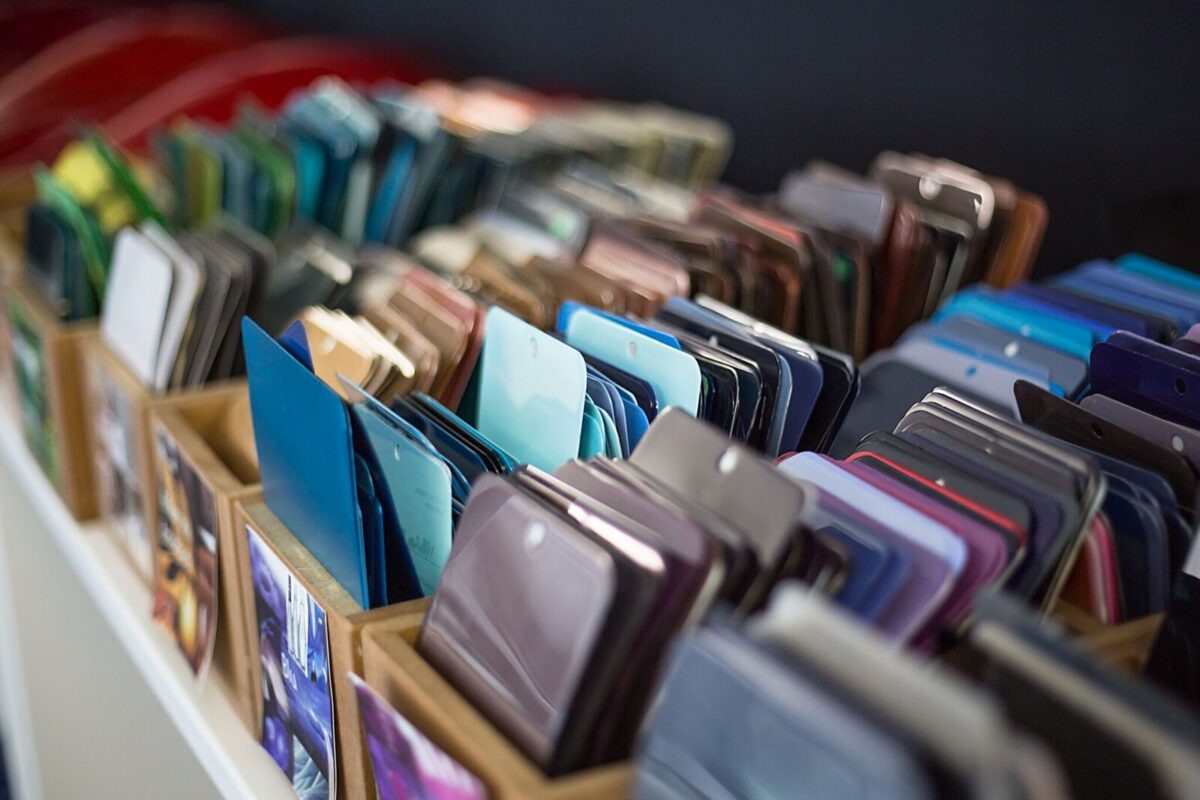 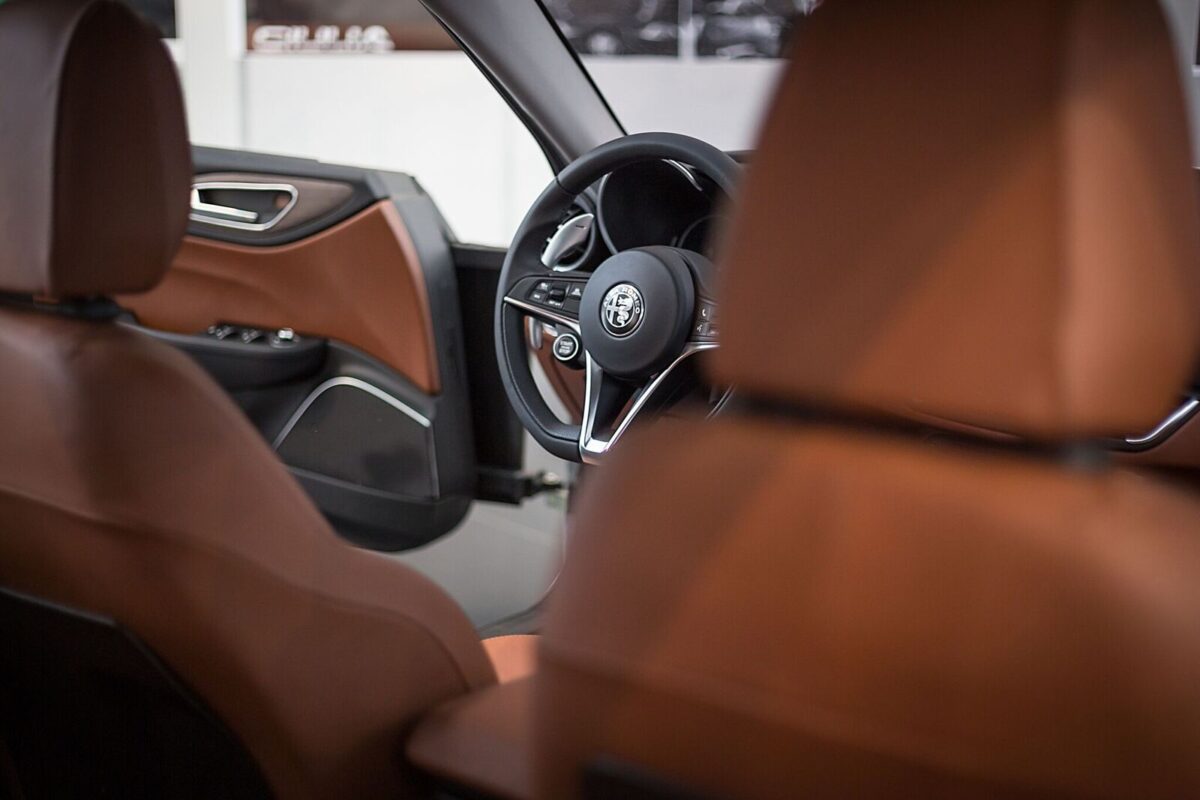 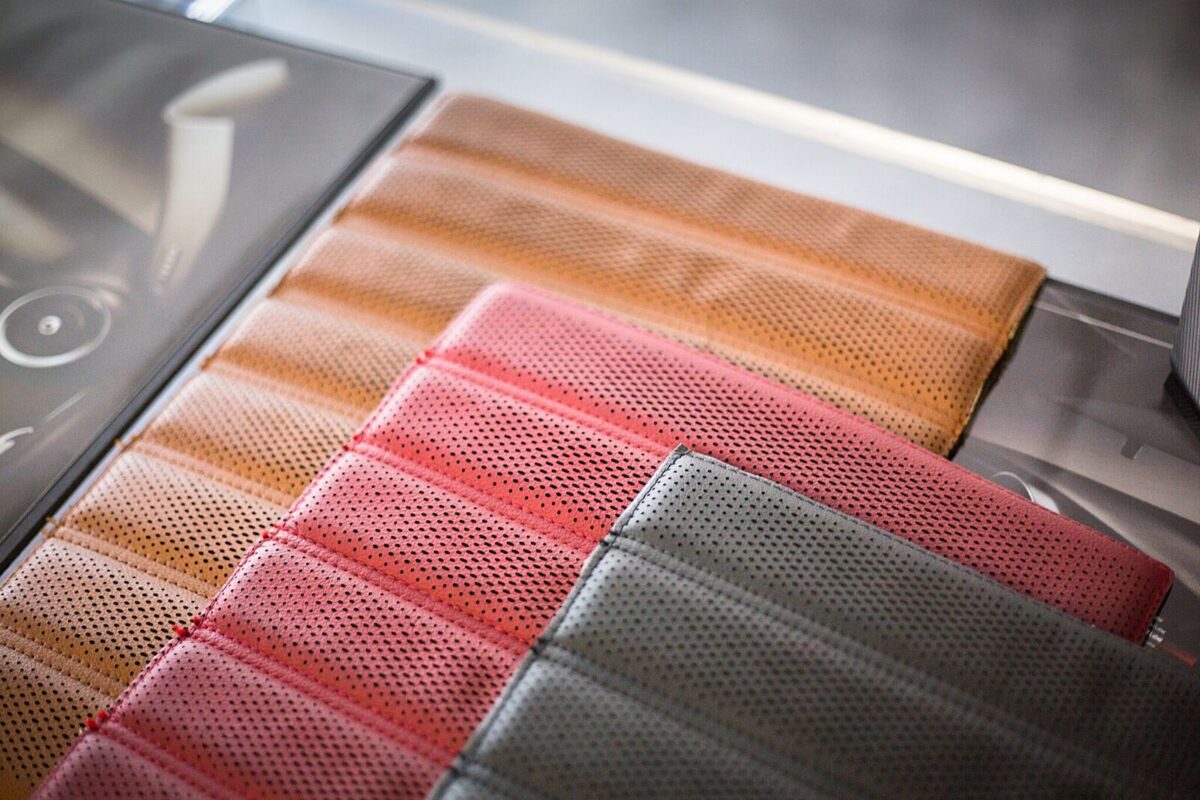 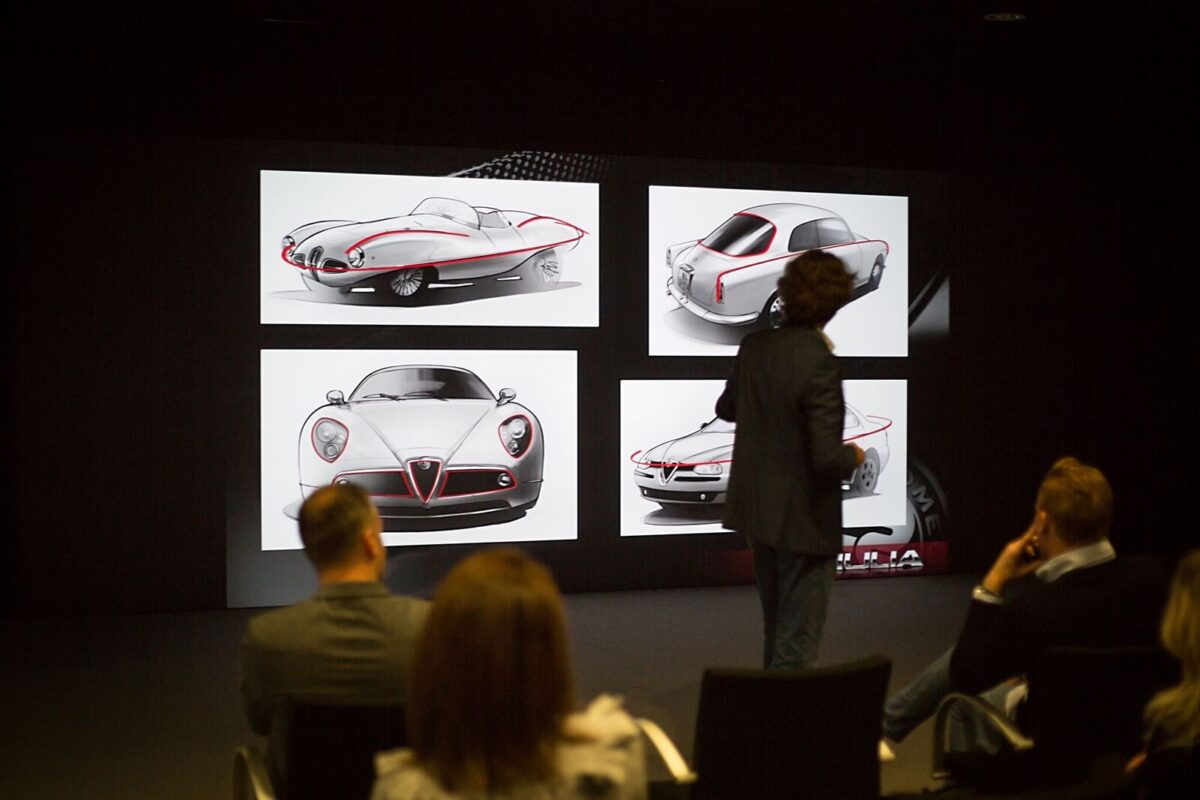 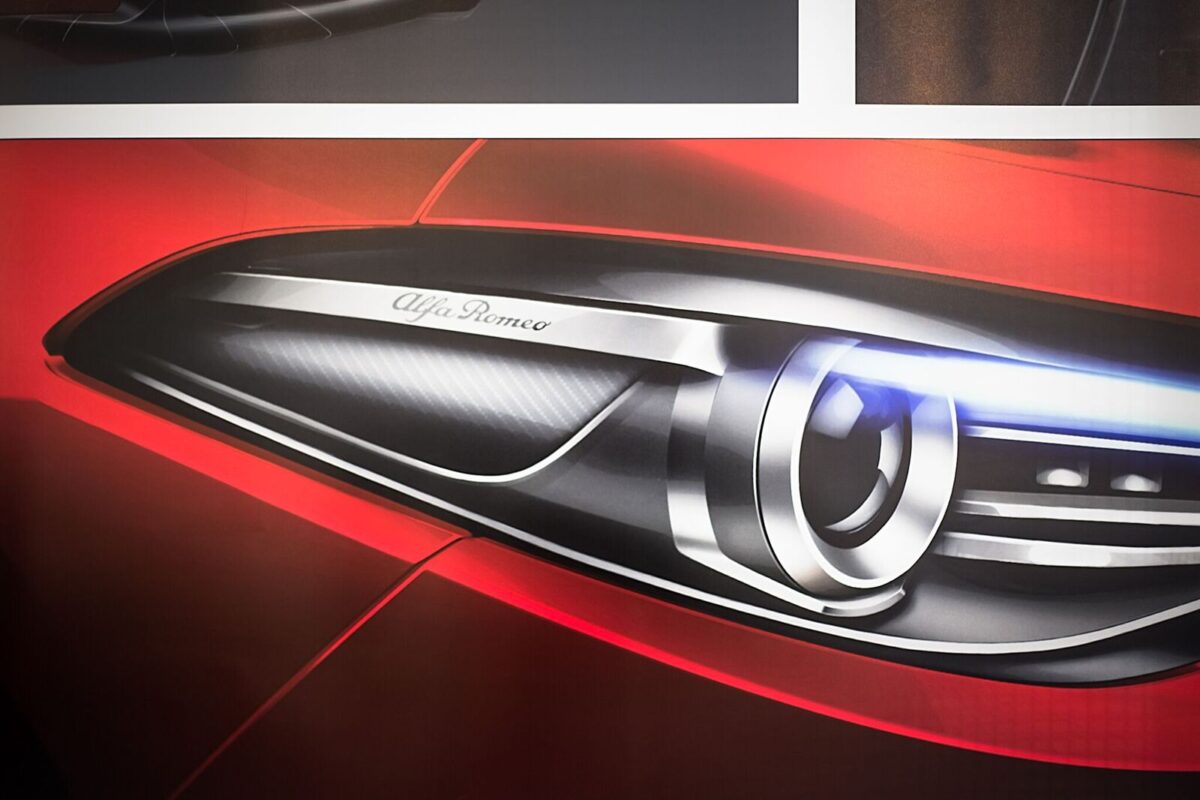 14 of 17
LED headlights by Magneti Marelli 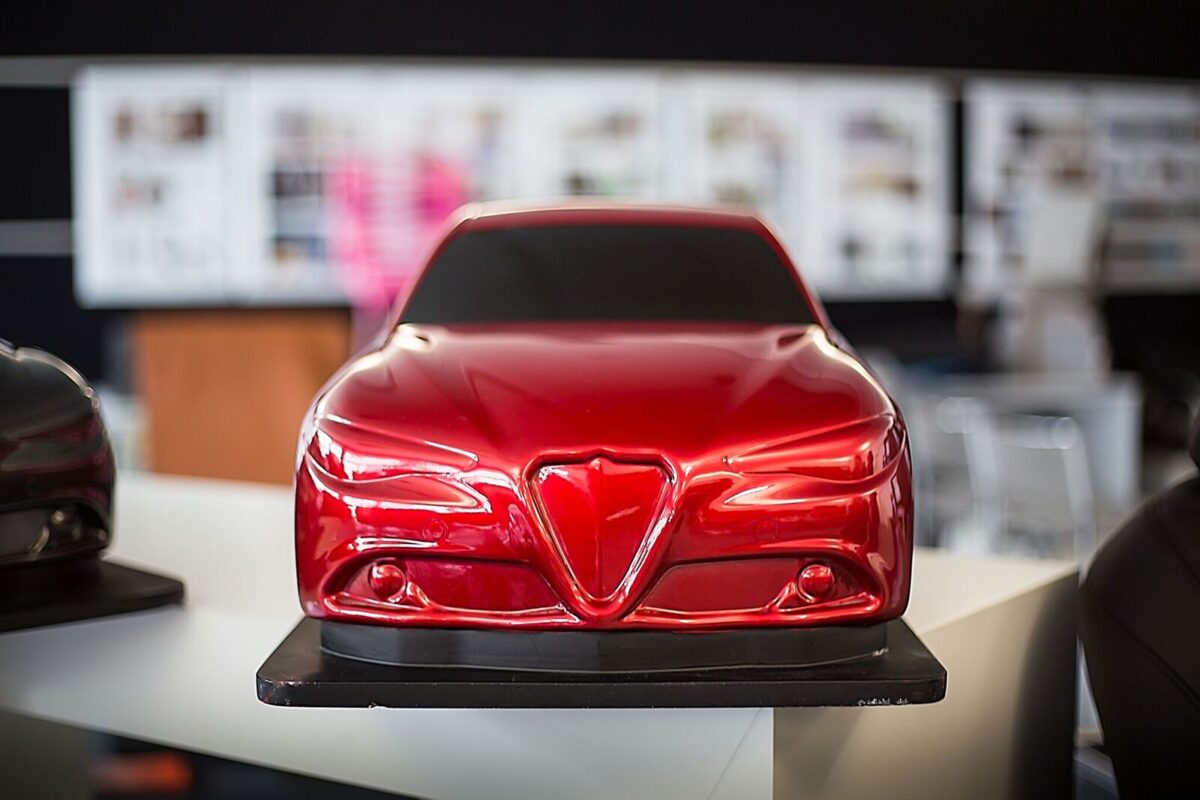 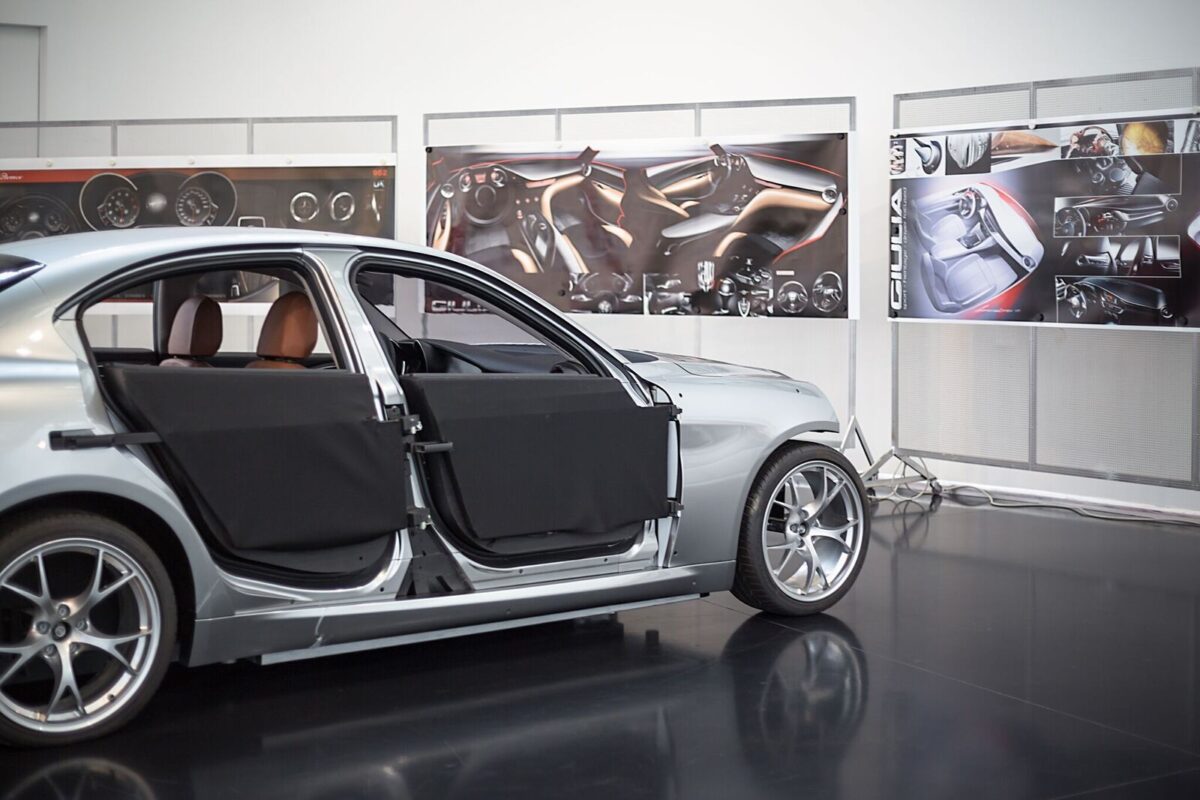 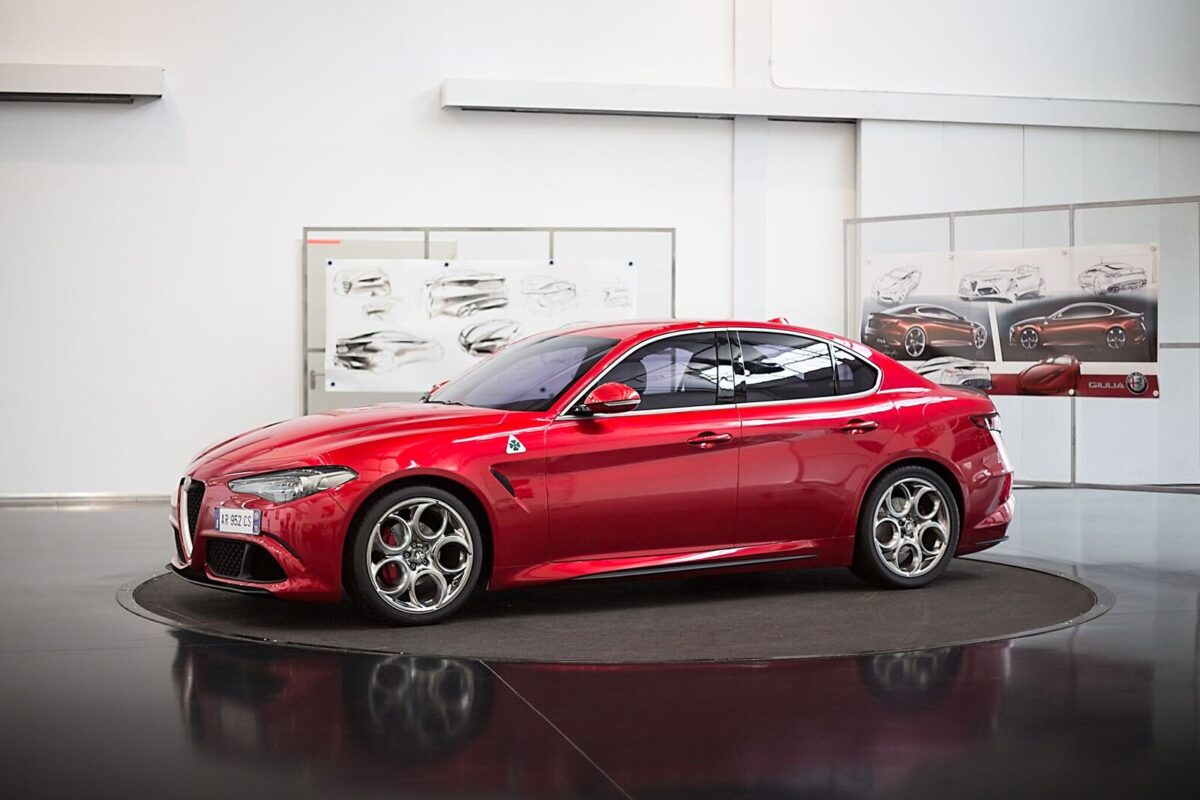