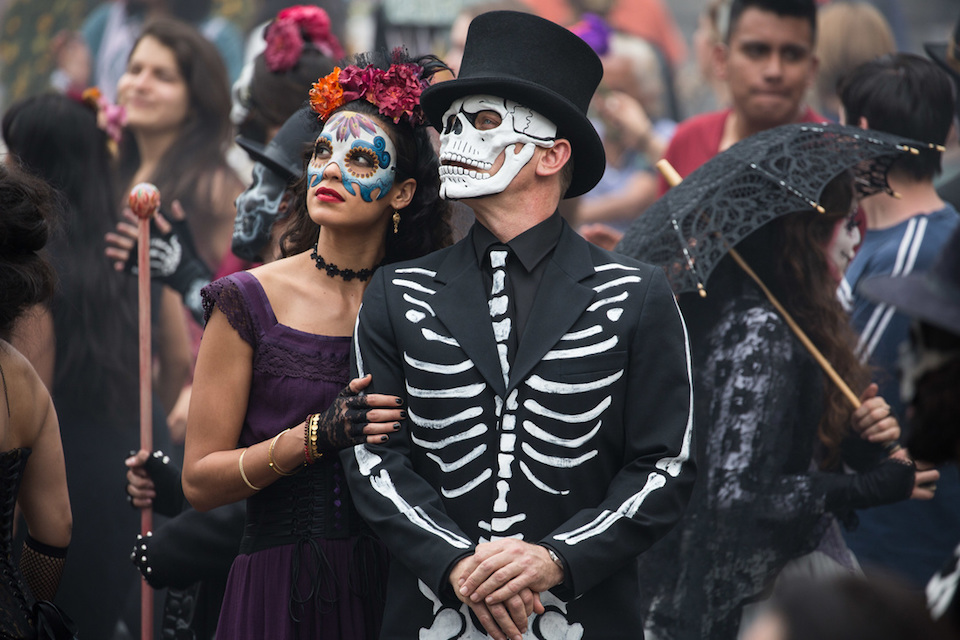 Hopefully this one doesn’t end in a helicopter chase

When we take inspiration from James Bond, it’s generally the clothes. (The cars if we can afford it. The women if we’re lucky.) But this? This is 00-inspo on a whole other level.

Picture a giant skeleton – a top hat perched upon its skull, a cigar clenched jauntily between its teeth. Hundreds of costumed revelers surround it, dancing in the streets and peering at the parade from window ledges. You may recognise the scene as the opening of Bond’s 24th outing, Spectre. You may also think it’s Hollywood’s take on a traditional Mexican celebration. You’re wrong.

Mexico City has never hosted a Day of the Dead parade. That is, until now. Thanks to Spectre‘s smashing success, Mexican officials decided to make the celebration a reality in the ultimate example of life imitating art. Alejandra González Anaya, one of the parade’s creative directors, explained to CNN why Mexico decided to host its first-ever Dia de los Muertos parade.

“As a result of the James Bond film we have decided to take advantage of the spotlight and put on the streets a great offering which we give to our dead,” she said. “I think it’s an opportunity for all Mexicans to show the world what the tradition is made of.”

Saturday, October 29 is the big day. The parade begins at 3 pm Mexico Central Time at the Angel of Independence and will end in the Zócalo, the city’s main square. 1200 hundred volunteers have donated their time to preparing for the event, which has been in the works for a year. An estimated 150,000 to one million people are expected to watch the procession along its 3.5-kilometer route.

Organisers plan to blend tradition with today. The parade will be split into three parts, the first two honouring the origins of the Day of the Dead, and the third celebrating its modern incarnation. Bond fans may even recognise some of the props and wardrobe from the film, which are set to make appearances.

If all goes well, Mexican officials hope the Spectre-inspired fete will become an annual event to rival Rio’s Carnival.

“We’re really trying to find a new brand, a new identity, rescuing the old and creating another option for the world,” said González Anaya. “We want you all to come and know that it is a beautiful celebration, a beautiful party and a wonderful opportunity to know more about the beauty and depth of our culture.”

Refresh your memory of Spectre‘s take on the Day of the Dead below.