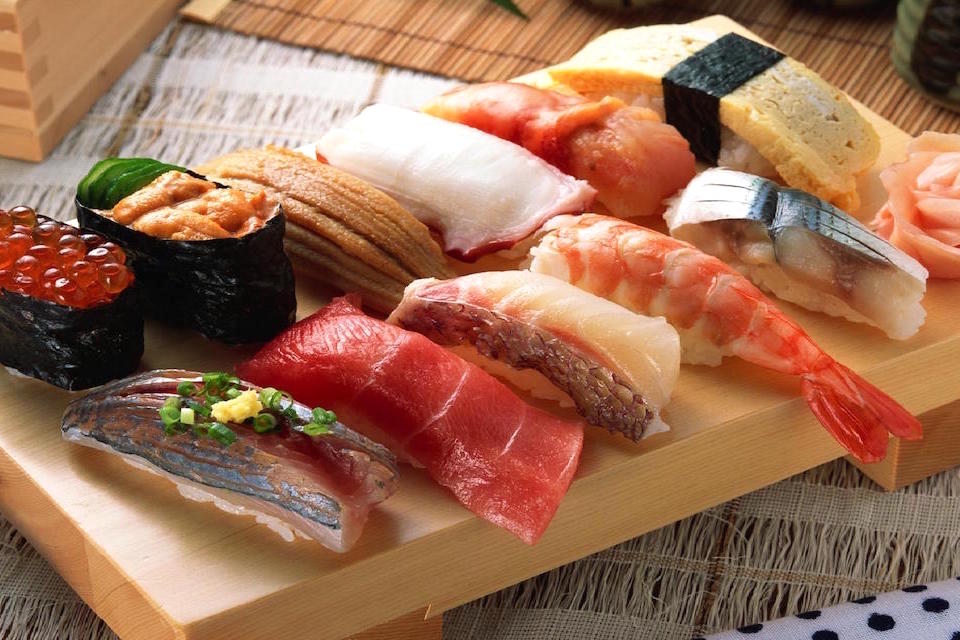 Jiro Ono’s 10-seat sushi restaurant, Sukiyabashi Jiro, is the stuff of legends. Ono is the first sushi chef in the world to receive three Michelin stars. He’s the subject of the documentary Jiro Dreams of Sushi. He has served the likes of President Obama and Anthony Bourdain, the latter of whom says he would choose Ono’s food for his proverbial last meal.

This is no ordinary sushi, Ono is no ordinary chef, and should you find yourself blessed with a seat at his counter, no ordinary manners will do. Sushi comes with its own special rulebook, one rooted in centuries-old Japanese traditions. The customs are designed to help you enjoy your meal more fully – to completely immerse yourself in the experience and taste the sushi the way the chef intended.

A sushi etiquette education is essential if you want to make the most of Japan’s greatest delicacy. And who better to show you the ways than Ono-san himself? According to Sukiyabashi Jiro and the master chef, this is how to get it right.

Don’t Be Afraid Of Fingers

Believe it or not, it’s not uncouth to eat sushi with your hands. In fact, that’s how it was originally eaten. It goes without saying that you must wash thoroughly before gobbling anything with your grippers, but once you’ve cleansed the cooties, fingers are fair game. Keep your digits parallel to the plate and grasp the sushi from the side. Picking it up from the top could distort its delicate shape.

Chopsticks Are Cool Too

If the thought of touching fish with your fingers makes you squirm, there’s no shame in the chopsticks game. It’s equally acceptable to eat sushi with utensils. Once again, it’s important to make sure you hold it correctly. Lift a piece of sushi with chopsticks by grasping it along the sides, parallel to the plate. Grasping from above increases the likelihood that it will fall apart.

Don’t overload the dainty flavours of the fish with the robust flavours of wasabi and soy sauce. Any condiments served with your sushi are meant to be used as economical complements to the main event. A sushi chef generally prepares pieces with the intended amount of seasoning built in. If you must go beyond, place wasabi on the sushi using your chopsticks and dip only a small corner of the fish in soy sauce. Do not mix wasabi into the soy sauce.

Ginger Is A Tool

Placing ginger on the sushi is a common beginner blunder. The ginger, called shoga, is actually meant to be a palate cleanser consumed between pieces. It can also be used to apply soy sauce if needed. Pick up a small piece of shoga with your chopsticks, soak it in soy sauce, and brush it across the the top of the fish. It’s easier and more elegant than attempting to dip the entire piece of sushi into the sauce.

Never dunk nigiri sushi’s rice into soy sauce. Sushi rice is carefully crafted, practically an art form – dipping it will spoil its fine flavour and do a disservice to the chef’s handiwork. Rice is also naturally inclined to soak up too much of the liquid, causing your sushi to fall apart. If you must dip, turn the sushi so that only the fish, and only a small portion of it, is submerged.

Pieces of sushi are designed to be eaten as a single mouthful. Don’t break or bite them into smaller bits. And while you’re at it, never separate the fish from the rice. Pulling off the topping is considered a serious insult to the chef.

Sushi is at its peak the moment it’s set in front of you. When a chef hands you a piece, eat it immediately. The rice should still be warm from cooking and the fat in the fish should be warm from the chef’s hands. Any dining companion worthy of being your dining companion will understand if you stop mid-conversation to take a bite. 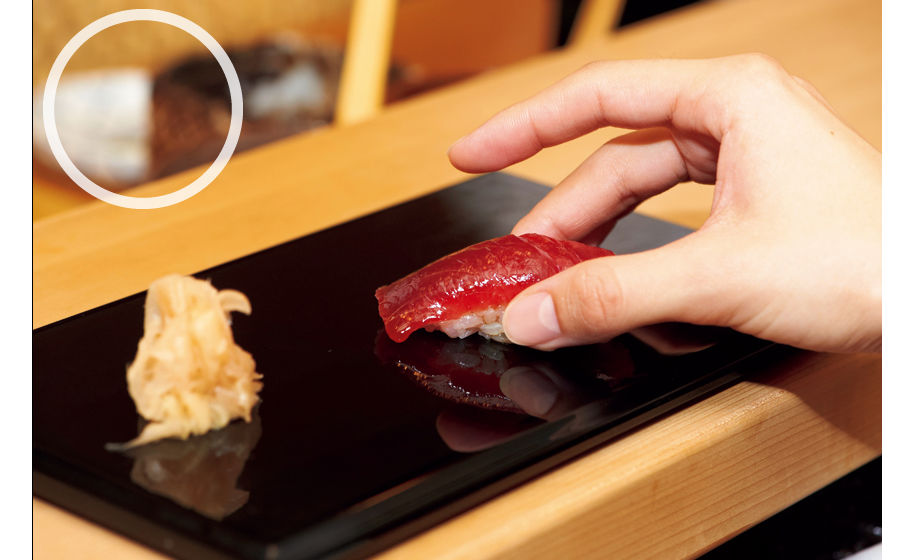 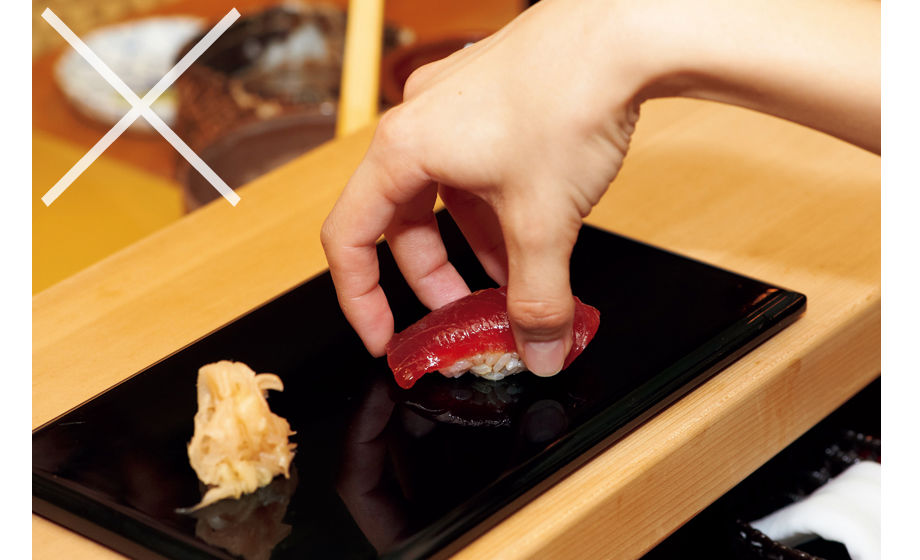 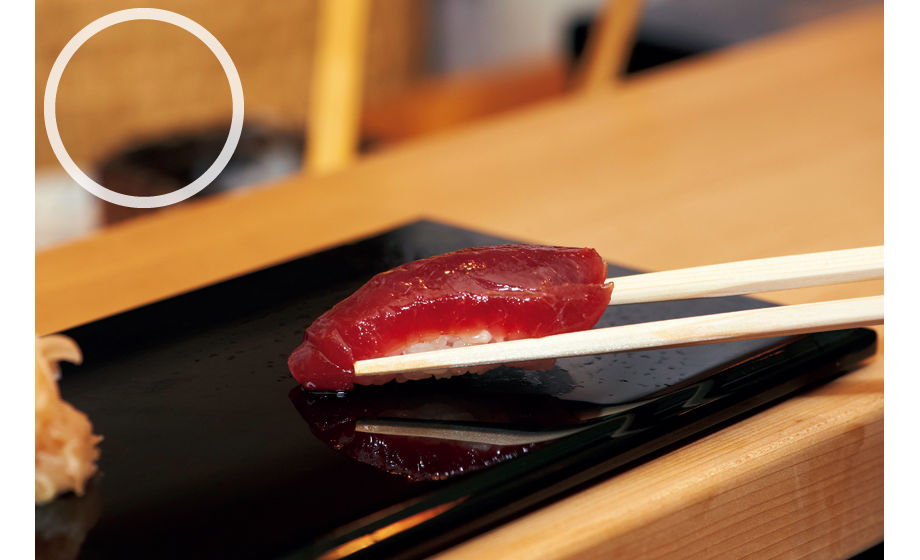 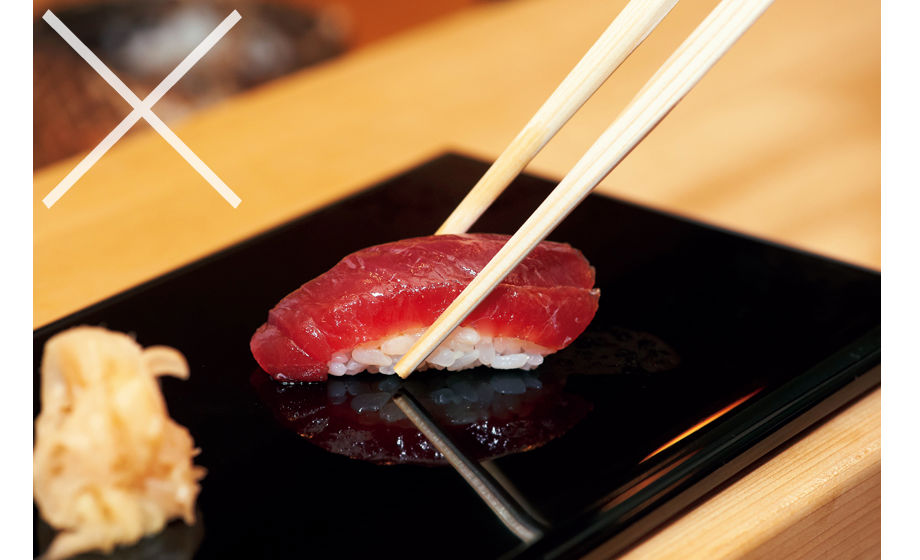 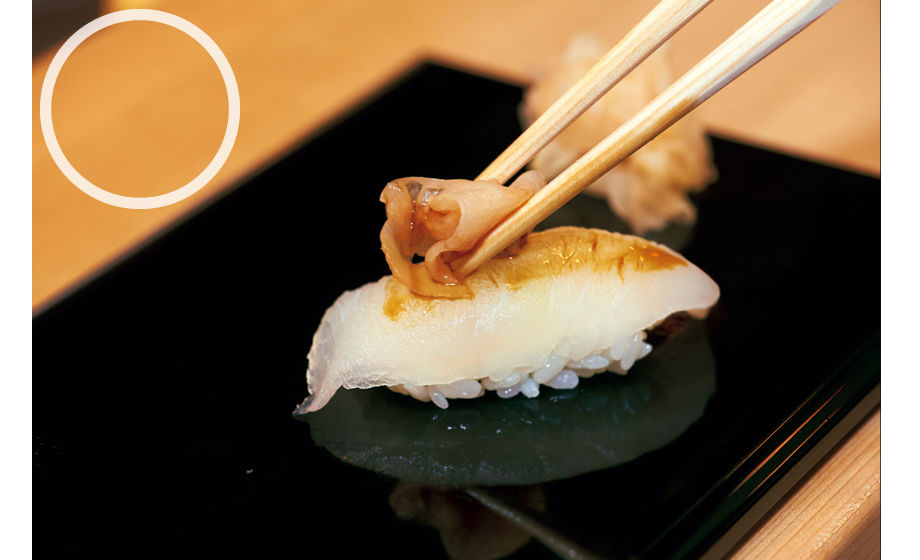 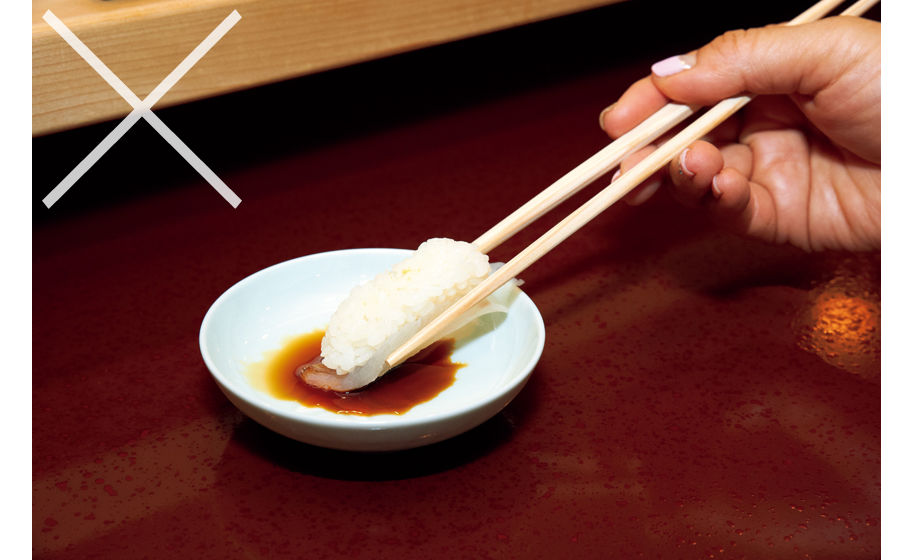 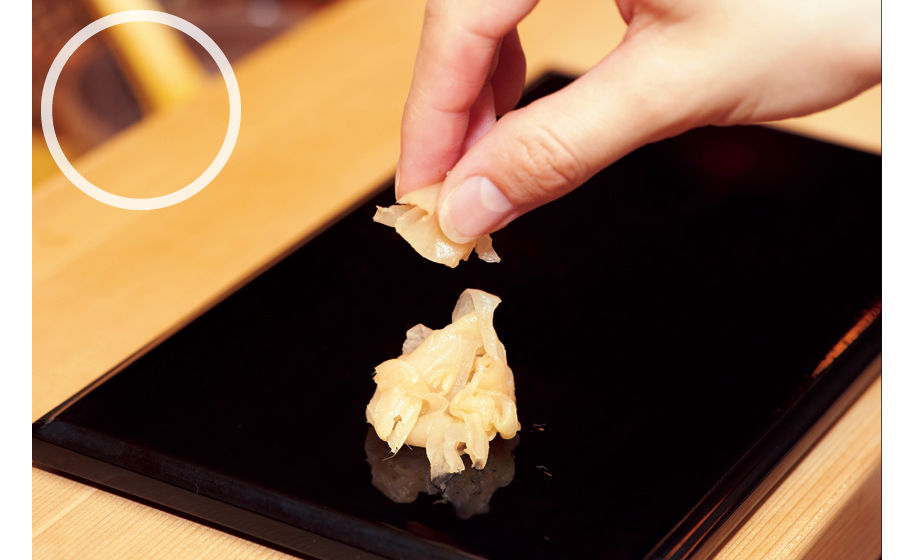 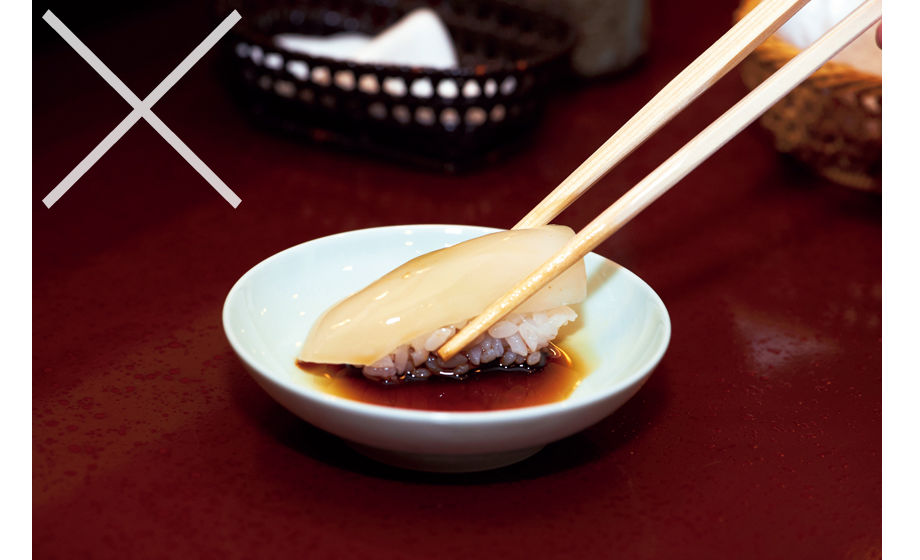 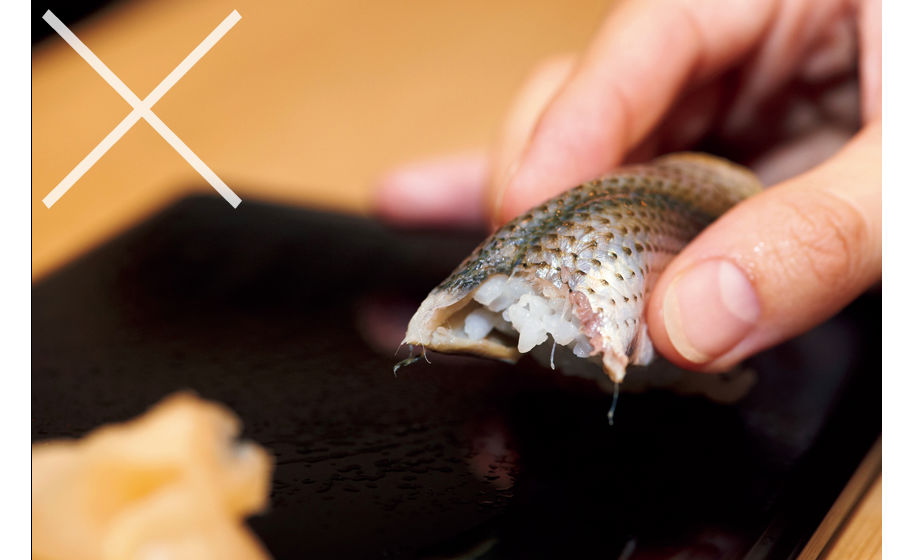 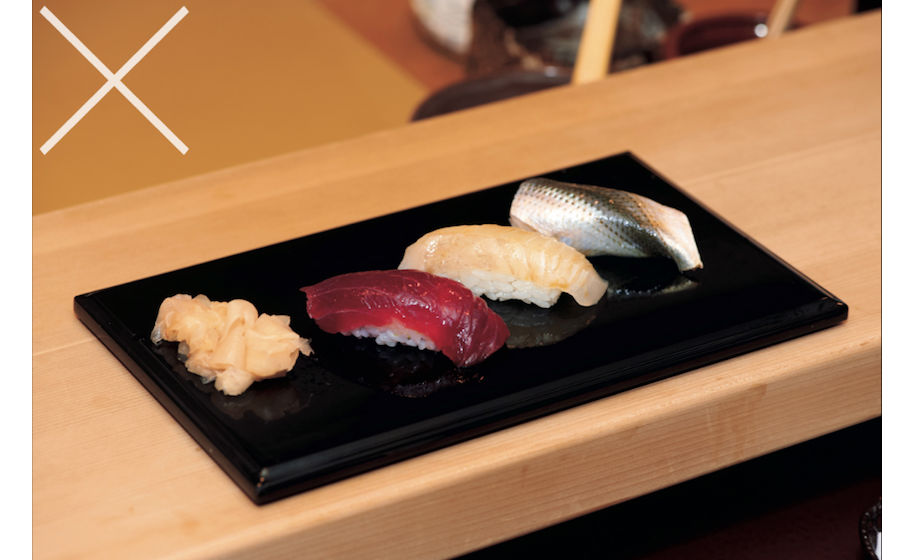