Cigar Etiquette: The Lost Art You Had No Idea About

From early days Bond to Schwarzenegger at his prime, there’s no denying that cigars have played a significant role in the modern gentlemen’s bible.

Cigars are a lot like alcohol in that their makers range in size, scale and quality. The quality of cigars varies from the cheap, vanilla flavoured sticks of depression commonly smoked by tradies at the races, all the way to the rarest, most exclusive cigars found at boutique tobacconists.

Much like alcohol, a host of small, artisanal companies are also entering the cigar trade. Before choosing one to enjoy though, it’s important to take into account a few things and understand how to smoke cigars properly.

How Quality Cigars Are Made

It’s fair to say that at face value, cigars are relatively simple things. Dried tobacco is shredded loosely, folded and rolled in a larger leaf. Once you start to peel back the layers (literally and figuratively) of a good Cigar though, a great deal of complexity is unveiled.

Things like the way the tobacco is folded to allow the smoke to come into your mouth, as well as the type of filler tobacco used, all have a key roll (that’s two puns thus far – winning) in just how much enjoyment you get out of your cigar.

As you can see in the video below, that’s what separates the master cigar makers from mass market junk.

Cheaper cigars are often machine made and rolled using chopped tobacco as filler, similar to what you’d get in a cigarette.

The art of hand-making Cigars hasn’t been lost though and regardless of the country a cigar comes from, hand-rolled cigars will invariably be of a higher quality. 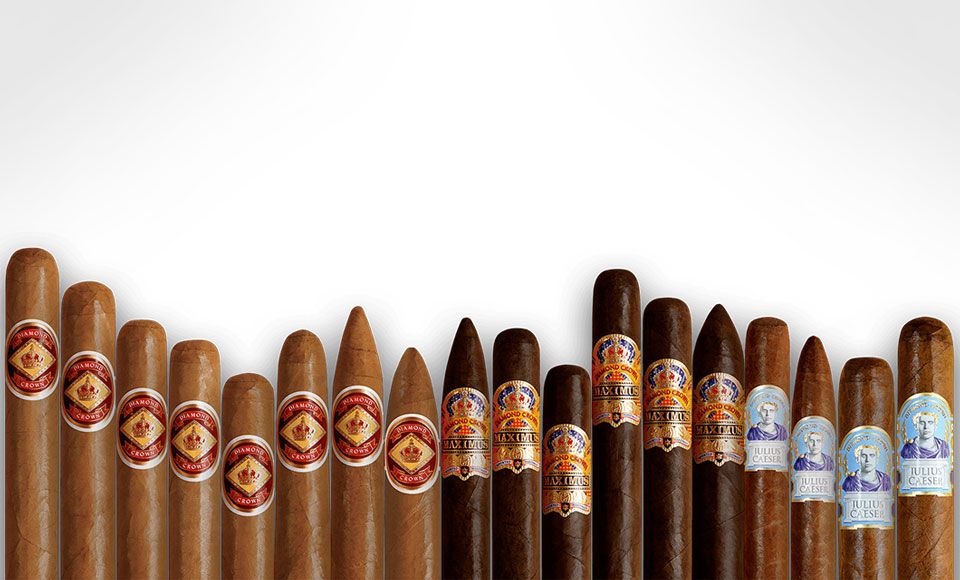 Keep your pants on, tiger. As you’ve seen hanging out of the mouths of famous world leaders from Castro to Churchill, cigars come in a huge range of different looks.

Cigars are measured both in length (anywhere from 3 to 9 inches long), and in widths by 64ths of an inch, which is commonly referred to as ring gauge.

Ring gauge ranges from about 20 (think a Cigarillo sort of size) to huge 60 gauge whoppers. The size by which all cigars are compared against is known as the ‘Corona’, which measures 5-5.5 inches long and has a ring gauge of 40 to 42.

Thicker, longer cigars generally burn slower, at a cooler temperature. This produces a milder flavour and a more easy smoking experience, plus a cigar that lasts longer. The thinner the cigar, the stronger and hotter it will burn, meaning you get a harsher, more intense flavour.

What’s In A Leaf 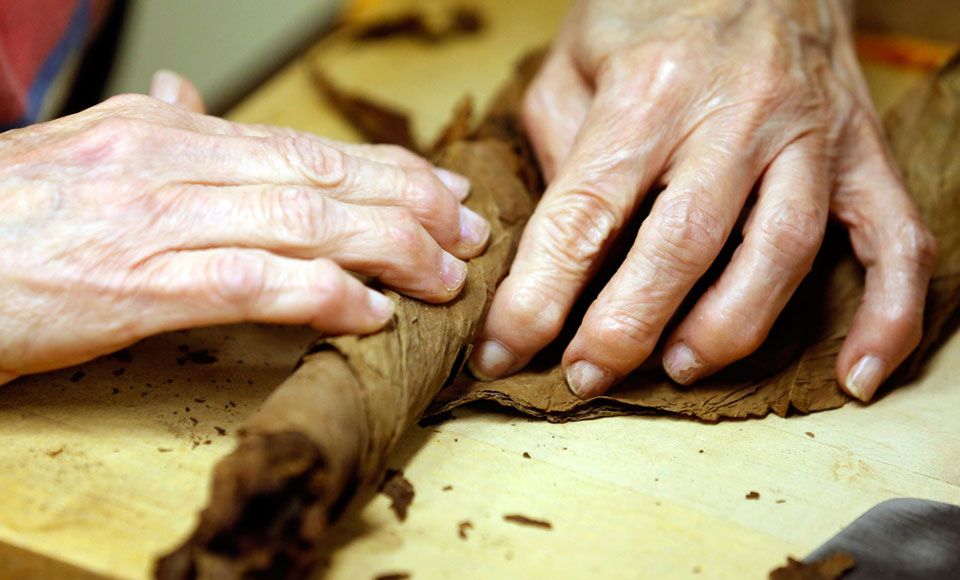 Cigars have 3 distinct layers: the filler, the binder and the wrapper, all of which contribute to a cigar’s flavour and burning characteristics.

Despite being overlooked by many first-time cigar smokers, the wrapper has a massive impact on how a Cigar smokes, even to the extent where it makes up most of the defining characteristics when describing it’s taste and feel.

Looking at the wrapper’s colour is a great way of getting to know the characteristics of any cigar, and they range from a light, greenish brown (Candela) to a dark, almost black brown (oscura).

The lighter the wrapper, the younger the tobacco leaf was when it was picked from the plant. This produces a lighter, smoother flavour, while darker wrappers have a richer, more intense taste.

While most would think it’s the other way round, the filler acts more to add layers of complexity to a cigar’s flavour than it does to influence its strength or richness.

Folded and wrapped lengthways down the cigar to create air passages, the filler is generally made up of a blend of different leaves.

The thicker the cigar, the more leaves you can blend, allowing for more complex flavours than their thinner counterparts.

This allows cigar makers to add far more depth of flavour to their cigars, and striking a balance between rolling the cigar too tight (less air flow means a weaker burn) and too loose (too much air flow means the cigar burns too hot and harshly) is something that makes the best cigars into tokens of true craftsmanship.

The beauty of buying a good cigar is that there are still people around that, much like with Alcohol or just about any luxury vice, are passionate about providing people with the best.

If you don’t know exactly what you want. Go to a good tobacconist and just ask. Places like the Sydney Cigar House and Alexanders in Melbourne will point you in the right direction, and a good deal of online retailers are also bringing quality cigars into the digital age.

How To Smoke The Perfect Cigar 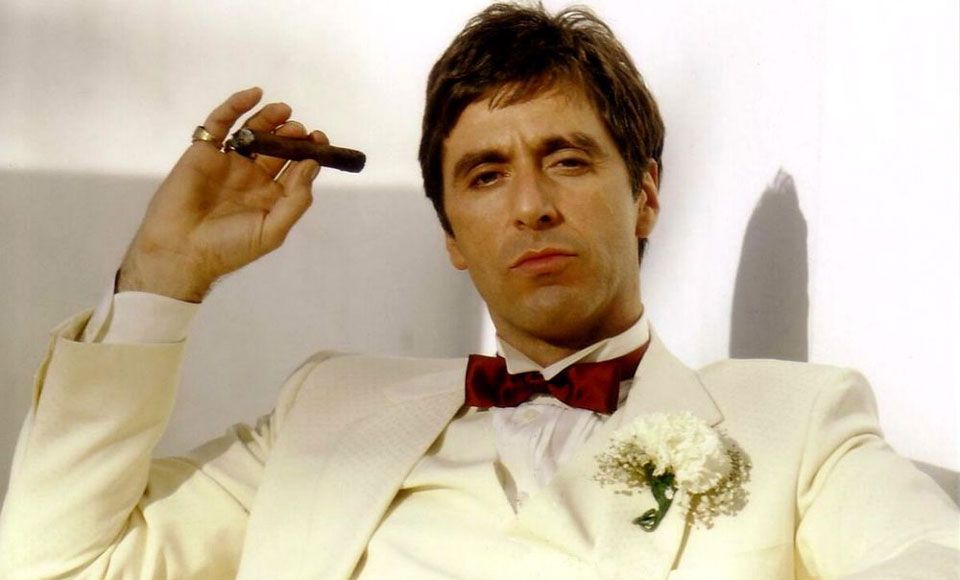 First of all, you want to make sure it’s stored properly until you want to smoke it. Unless you’re smoking it straight out of a pack, cigars need to be stored in a controlled, humid environment, for which many people use a specialised carry case, or Humidor.

This stops the tobacco’s natural oils from drying out and ruining the flavour of your cigar, and helps your cigars last for a few months before they need to be smoked.

Once it comes time to light up, the first step is the cut. Many mass-market cigars are pre-cut, but if not, the easiest way is to use a double-edged guillotine cutter about ¼ inch from the base of the cigar.

Realistically, you can use just about anything that produces a steady flame to light your cigar without affecting the taste, but wooden matches, with their milder flame, can ensure you’re not burning the tobacco leaves before they’ve been smoked. Make sure you’re constantly puffing and rotating your cigar as you light it to ensure an even light.

Before lighting, it’s important to remember a couple of key things. One, Cigars produce ALOT of smoke. A rough estimate is that it’s basically the equivalent of smoking 10 cigarettes, so remember the effect that’ll have not only on your mouth, but the lungs of those around you.

Secondly, you’re in it for the long haul. This is NOT like smoking a cigarette, and if you don’t enjoy the taste of smoking in general, you sure as shit won’t like it once you’re an hour deep into the Churchill your mate bought you. Good cigars can last hours, so plan accordingly.

After that, all that’s really left is to enjoy. Bring the smoke into your mouth, let it sit there, and then blow it out. DO NOT Inhale Cigar smoke.

It doesn’t make you look hard, it just makes you look like a simpleton, even more so when you’ve descended into the mother of all coughing fits.

Savour the flavour, puff and rotate the cigar every 30 seconds or so to make sure it’s burning evenly, and share the love with other like minded individuals.

Also, remember to keep puffing. You don’t want to be the guy asking for a lighter because your cigar’s gone out.