Why The Airbus A350 Should Be Your Only Flight Of Choice

If you’re anything like us, you get a you little bit excited whenever you see the term “A380” or “787 Dreamliner” on your freshly booked flight itinerary.

Anyone who still has the experience of a long-haul flight fresh in their memories will tell you exactly why: once you get over that 5 or 6-hour threshold, you’ll take any additional bit of comfort and convenience you can get (especially if you’re flying economy).

Now, there’s a new long-haul carrier for the magnificent jet set to get excited about, courtesy of those ingenious Frenchies at Airbus, the A350.

Here’s why its set to make your next flight the smoothest yet.

Improving On All Of The Basics 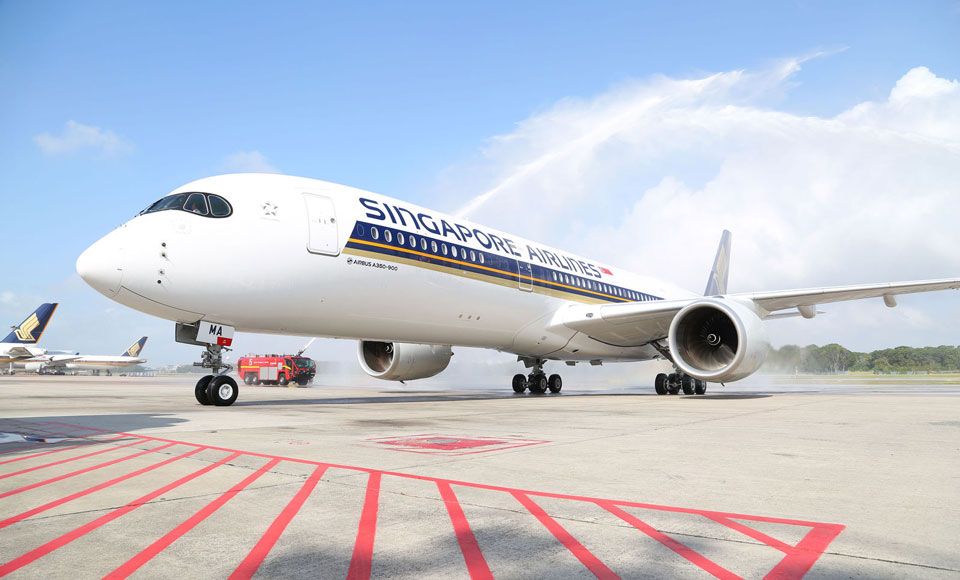 Of course, before we get to any of the frivolous things that take the A350 from a literal Air-bus to something more, it’s worth looking at how the Airbus A350 makes transporting people through the air safer and easier than ever.

First and foremost, the Airbus A350 can carry a lot of people a very long way. It comes in 3 variants which can seat anywhere between 280 and 366 people in a twin-aisle format. Its maximum range tops out at around 8100 miles, meaning if you took off in Sydney, you’d get somewhere halfway between Dubai and London before its twin-Rolls Royce engines finally ran out of juice. Whether any airlines plan to run routes this long we’re not sure, but you can’t deny that’s some serious mileage.

So then, it’s essentially Airbus’s answer to the acclaimed Boeing 787 Dreamliner, only with an even more intense approach towards ensuring the most passenger comfort and space possible. Wider seats, higher cabin ceilings and ambient lighting offer a sense of spaciousness that’s never been achieved before.

Aside from the new engines, the efficiency of the Airbus A350 comes from the way it’s built. More than half of it is made from Carbon Fibre, while it also has revolutionary wings that morph and change shape while it’s in the air. Airbus claims that the inspiration for this design comes from a bird, which is in a way endearing, and in a way strange. We’d assumed that planes have been taking inspiration from Birds for most of the time anyway.

All of this combined means that the Airbus A350 is by far the most economical, eco-friendly way to travel long-haul, with the new engines, reduced weight and reduced drag making for a saving of up to 25% on CO2 emissions.

What This Means For Your Flight 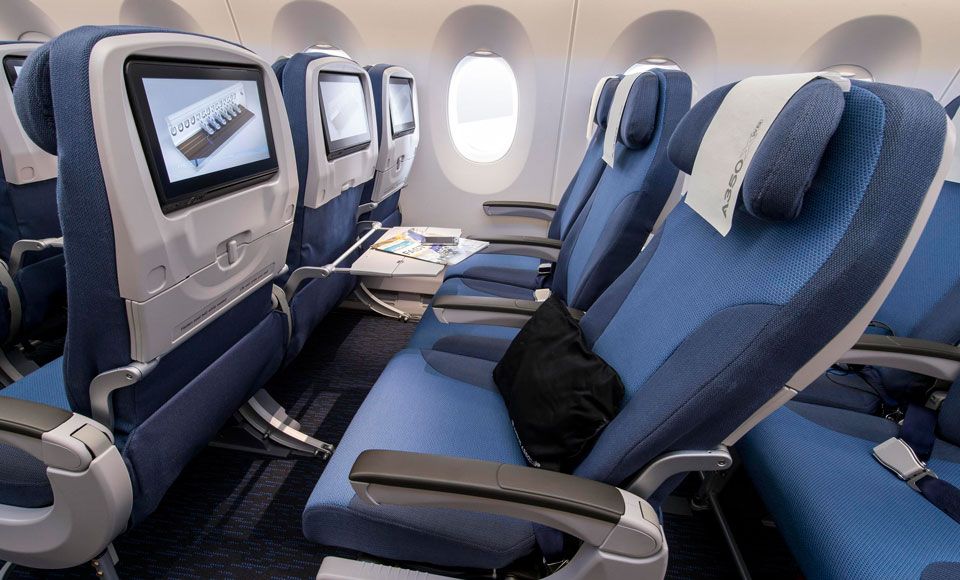 The A350 Economy Class

Hopefully, a fair amount. Of course, a good deal of what you’ve heard about new aircraft in the past has been total wank, with airlines boasting that their new planes now have an extra 5mm width and 0.002 degrees of pitch to the economy class seats, as if you’re supposed to tell the difference after 9 hours of sleep deprivation and turbulence. With aircraft like the Airbus A350 though, things are set to change a fair amount.

First and foremost, the legs on the A350 mean that you’ll be able to fly further without needing to take any annoying stopovers and change plans. Singapore for instance intend to roll out non-stop services from Singapore to LA and Amsterdam, the latter of which is a considerable 13-hour haul, but all the same it’s a shit ton better than a 9-hour changeover at Doha.

The extra space and flexibility of the Airbus A350’s format allows the airlines more opportunity to play around with the things that actually matter when you’re on-board. Different airlines are playing around with the configurations of their cabin sizes to match the length of the flights they’re using the A350 for. Some have larger economy cabin at the expense of the premium economy offering, while airlines like Singapore Airlines are even downsizing their business-class cabin to make room for more at the back. Smaller A350s will most likely make do without a first-class cabin altogether.

Nonetheless, the Airbus A350 has an impressive level of versatility, meaning that you’ll get the most spacious cabin possible for your flight and class. Before it’s even customised for the airline ordering it, Airbus has already incorporated a wide range of technology to make the mere act of living in their new aircraft as non-demanding as possible.

The Airbus A350 features what Airbus claim is the quietest cabin on any twin-aisle aircraft, up to 20% quieter than other current-gen aircraft, along with brand new air purification technology that cycles the air in the cabin every 2-3 minutes, optimising the temperature and humidity within the cabin as it goes.

Even the bare essentials of the Airbus A350 are able to be tinkered with to allow maximum passenger comfort. Its business-class configuration points the window seats outwards towards the side of the aircraft, making for a better view out of the window. Even in economy, Lufthansa have changed the colour of their seats so that they get gradually lighter towards the middle, negating the effect of the light streaming in through the windows and making the central seats feel less dark and cramped. 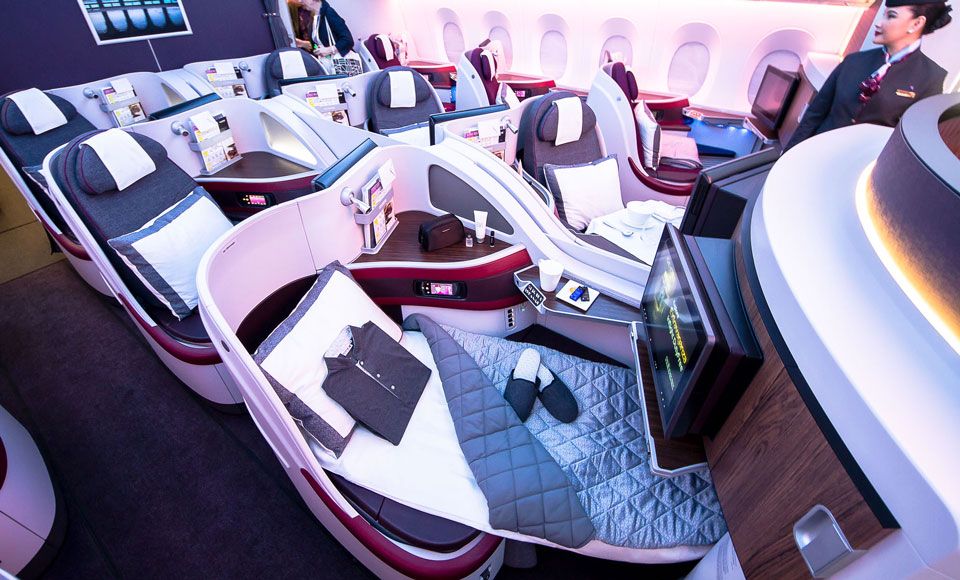 Of course, everything we’ve talked about so far only makes so much difference in making sure you get your moneys worth when you’re paying thousands of dollars for a flight. Air travel should always feel that little bit special, whether you’re in economy or first class. The Airbus A350 is set up to provide just that feeling.

The Airbus A350’s economy seats are wider than ever before and sit inside the most spacious cabin possible, with vaulted ceilings and panoramic windows that adjust electronically from transparent to fully opaque. The overhead lockers are larger, offering space for every passenger to get a full-sized carry-on bag overhead without competing for space with those next to you. Each seat has a 4-way adjustable headrest, and Qatar Airways have even taken the step of integrating each seat’s power box into the seat itself, meaning you get more legroom.

Business class, as ever, takes things up a notch. Airbus A350 business cabins can be configured in either 1-2-1 or 2-2-2 layouts, maximising the space in each cabin to suit the length of the route being flown. Taking inspiration from its bigger brother, the A380, the Qatar A350 also offers an in-flight walk up bar for its business class customers.

A good flight is nothing without entertainment, and while other aircraft have definitely made strides towards making flight a properly plugged-in, interactive experience, the A350 has finally brought this aspect of flight into 2017. WIFI and GMS integration is available across all major airlines, going a step further than the rudimentary dial-up speed internet you used to pay an obscene amount for every hour (although it is still pretty pricey).

All seats are equipped with the latest touch screens, customisable for each airline to provide the best entertainment possible, along with integrated charging, USB and power ports available in just about every category.

Airlines Using The A350