The 2017 Geneva Motor Show has finally arrived and as many would expect, the calibre of cars rolling into the spotlight is simply astounding. That’s not surprising given it is the world’s biggest and most anticipated automotive showcasing.

As the future beckons, it’s a comforting sight to also see that big manufacturers aren’t just focusing on family-friendly SUVs and the latest soulless econoboxes that will one day rule our roads.

This year it’s all about speed, luxury and raw performance from some of the world’s most significant marques. We’ll stop the sand bagging and let the precious metal do the talking. This is D’Marge’s pick of the ten best releases from the Geneva Motor Show 2017. 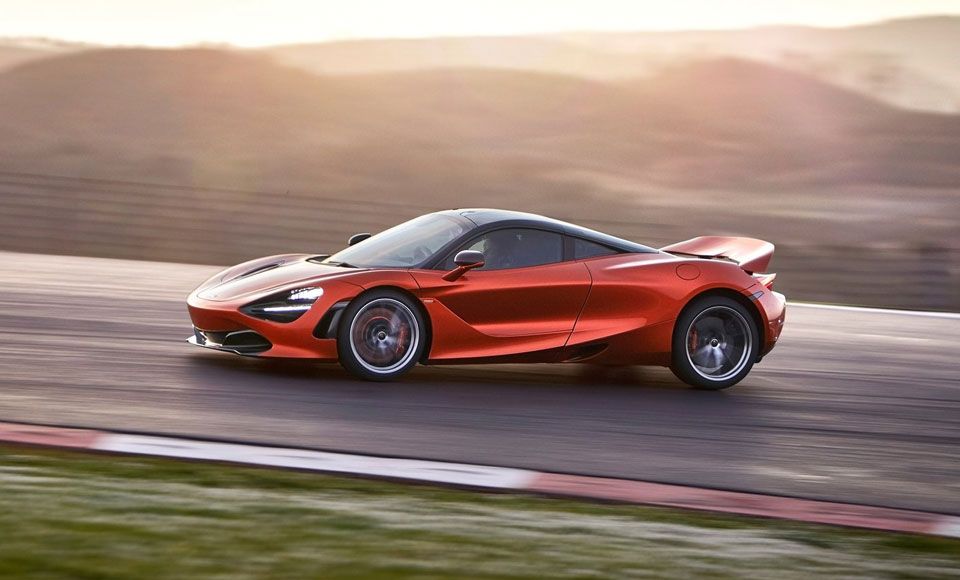 McLaren have pulled the covers off their latest supercar and it’s quite the looker. The 720S marks the arrival of the British marque’s second generation Super Series car which will take the reigns from the outgoing 650S. This means that 90 percent of it is brand new stuff from McLaren and the remaining 10 percent has been refined from its siblings such as the 675LT and P1. As an upgrade the 720S trades the 650S’ aluminium superstructure for carbon fibre whilst the new engine is a twin-turbo 4.0-litre V8 unit sporting 710hp and a 0-100km/h sprint time of 2.8s. Showing off its F1 credentials, the 720S naturally has an astronomical 8,500rpm redline. 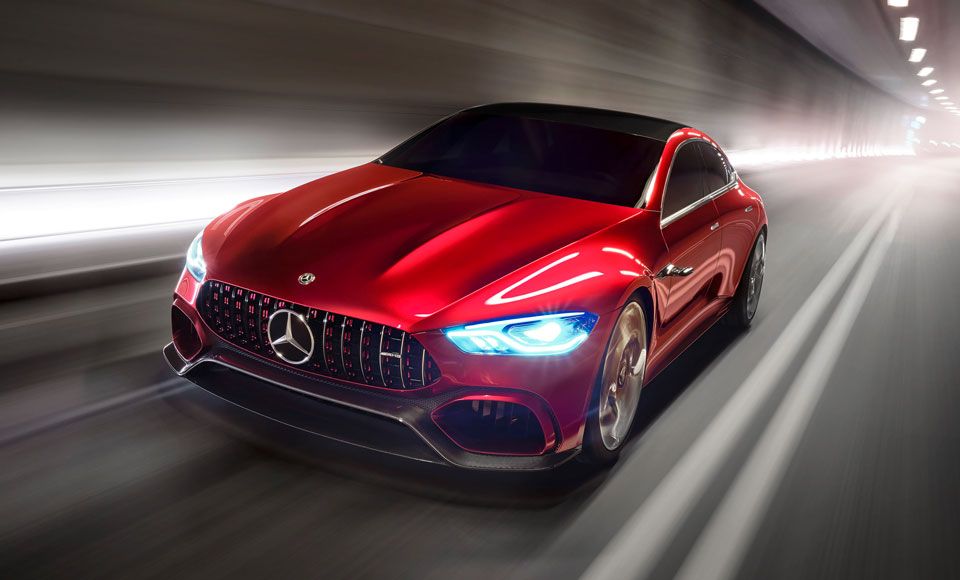 Mercedes have gone down the concept route in showing off the future of the AMG GT badge. And that future looks like it will be sporting four doors and a hybrid engine. This may sound suspiciously like sedan territory but rest assured the AMG moniker is satisfied with a high-performance variant of the hybrid engine derived from the Silver Arrows’ F1 technology known as ‘EQ Power+’. What that means in the real world is a twin-turbo 4.0-litre V8 coupled to an electric motor to generate a combined power output of 805hp. Getting those kind of figures onto the ground won’t be easy so power will instead be sent to all four wheels, enabling the 0-100km/h sprint to be diminished in under three seconds. There’s no details on when this sleek red machine will reach production but given the hybrid technology is currently being developed in F1, it shouldn’t be too long before we see a Porsche Panamera fighter from the Silver Arrows. 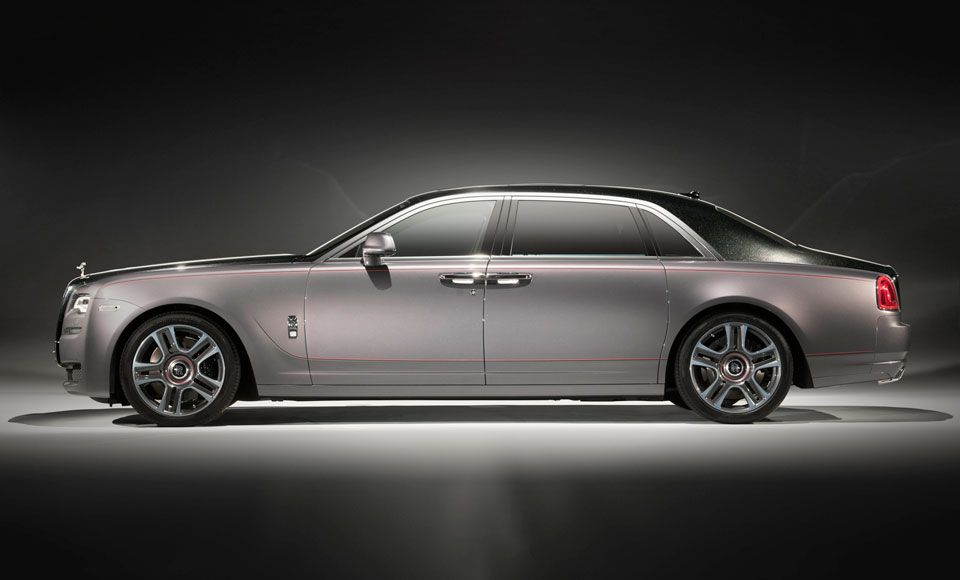 Rolls-Royce have gone and done what Rolls-Royce does best: Stun the world with sheer opulence. Don’t believe us? How does a paint job featuring 1,000 crushed diamonds sound? They call this particular Ghost model the ‘Elegance’ and it’s sure as hell isn’t an overstatement. The modified long-wheelbase Ghost required the British luxury marque to spend two months on paint testing alone. Other than that the interior of the Ghost ‘Elegance’ features striking red and black accents which extends to the pinstripes on the car’s exterior. 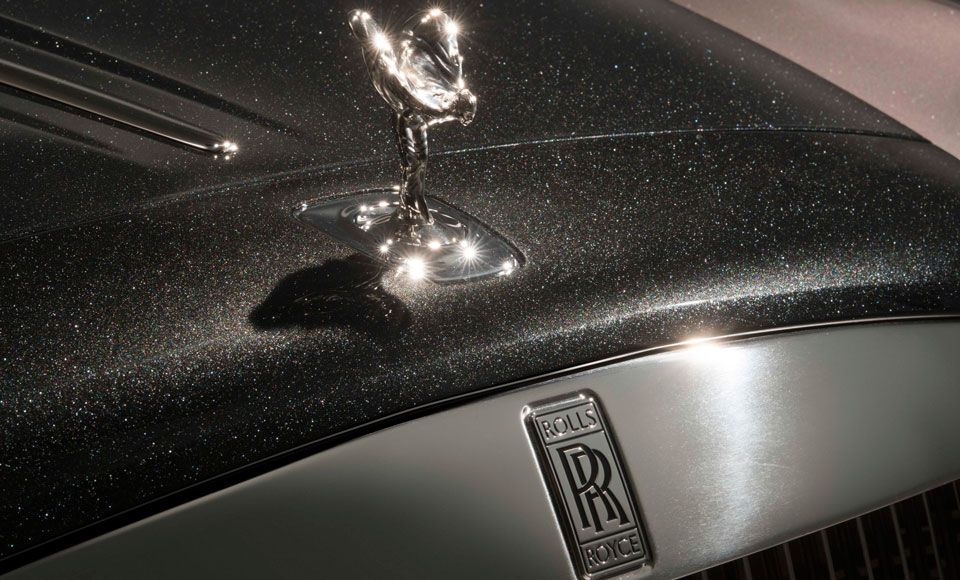 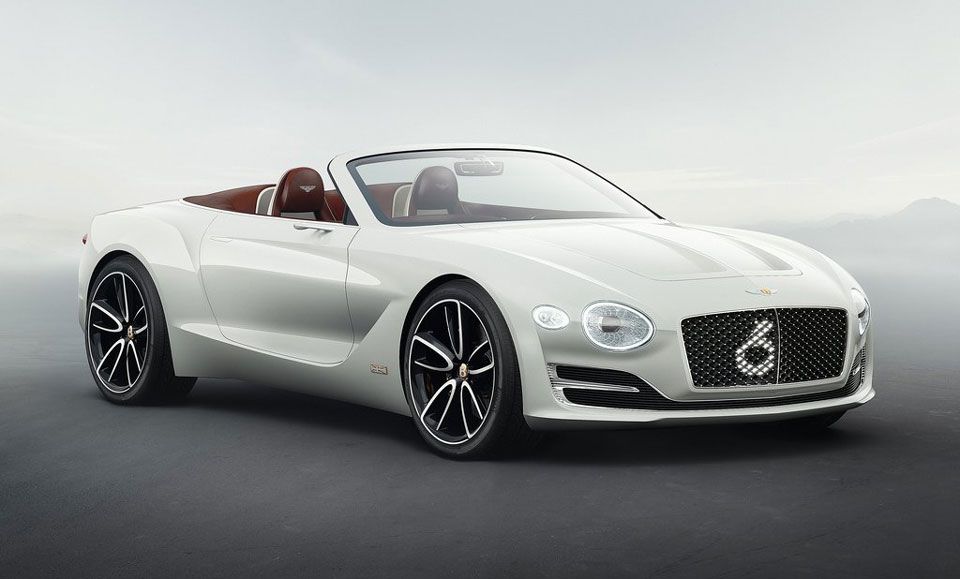 Another luxury marque joining the electric fleet in 2017 is Bentley. Often renowned for their big V8 and V12 offerings, Bentley did something different this year and brought along the all-electric EXP 12 Speed 6e instead. The car is at Geneva to gauge consumer interests and those who are only concerned about aesthetics will no doubt be pleased. The drop-top coupe will be fully electric rather than a hybrid system with Bentley believing that any of their electric vehicles must carry the same mileage credentials as their petrol-powered brethren. On the inside it’s an exercise in leather and copper trim paired with futuristic control systems. If that’s not enough to entice buyers to the green side, the number ‘6’ on the grille also lights up when the car moves. 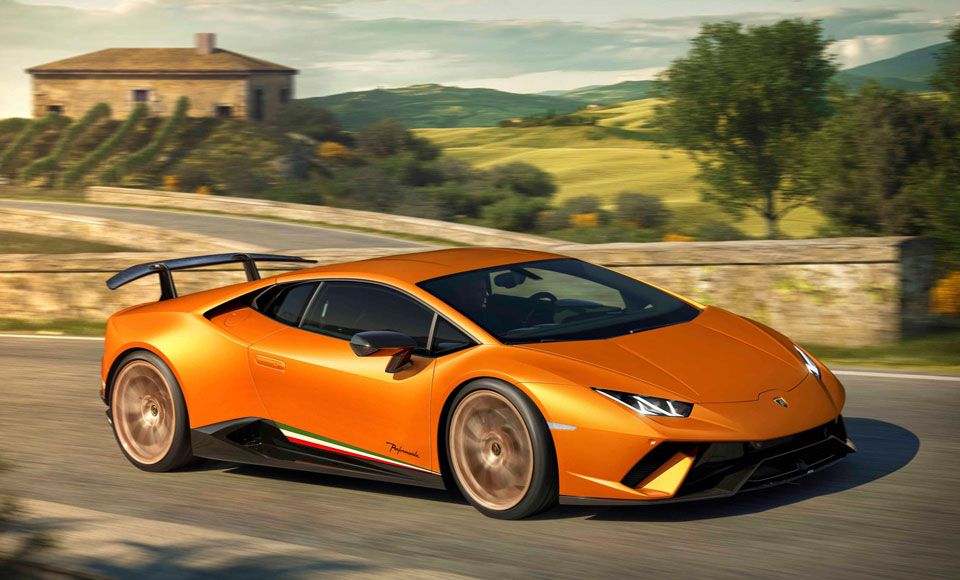 When Lamborghini wanted in on the Nurburgring bragging game they built this – the Huracan Performante. Their official lap time of 6m 52s puts the company ahead of Porsche’s 918 Spyder and at Geneva the Italian supercar maker revealed how it was accomplished. Active aero, more power and a lot of fine tuning has managed to turn this into Lamborghini’s latest track monster. In figures that’s a 640hp V10 sending power to all four wheels tied to uprated suspension and anti-roll bars. A big wing helps the car stay glued to the road on the demanding tarmac of the Green Hell. 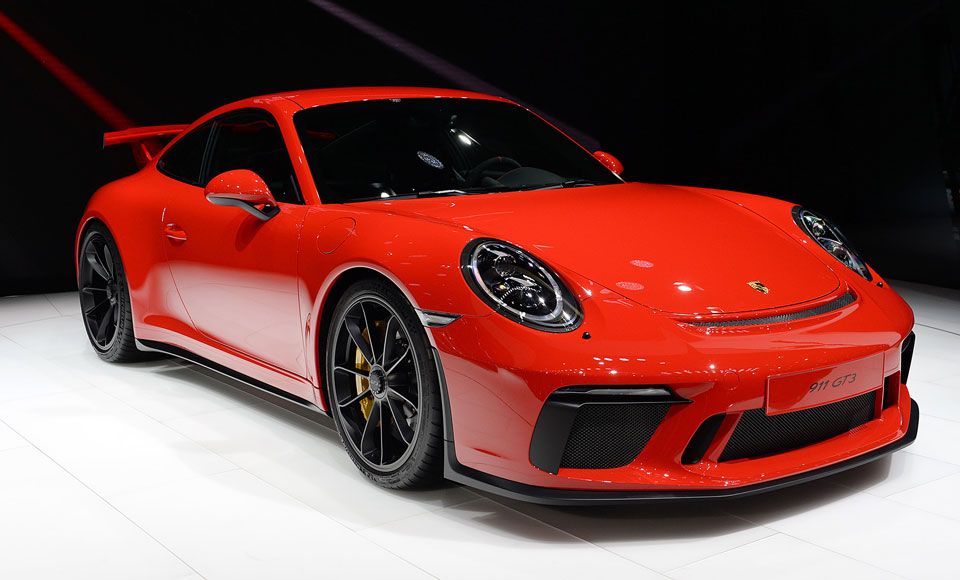 The Stuttgart crew are going it old school with the 2018 version of their much heralded 911 GT3, ditching the rapid fire PDK dual clutch transmission for a traditional manual one. Okay, not ditching it, but giving driving purists an option for a manual at least. All of this comes from the same vein of the 911 R which won accolades in 2016 for bringing the raw emotion and fun back to driving rather than setting lap times. Just like the 911 R, the 2018 911 GT3 runs a 4.0-litre naturally aspirated flat six-cylinder with 500hp to launch the car to 100km/h in 3.2 seconds for the PDK or 3.8 seconds for the manual. 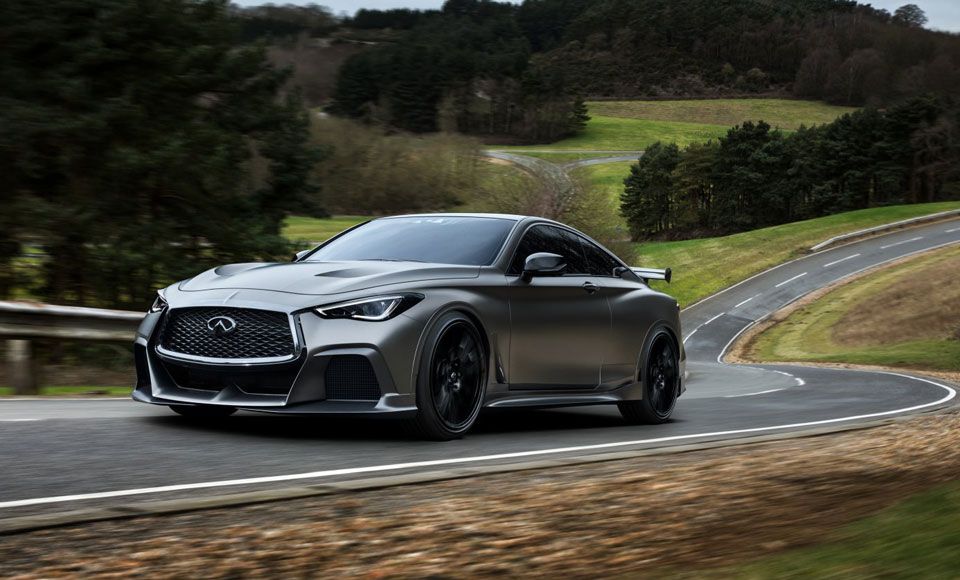 Infiniti/Nissan/Renault are off teasing the Geneva crowds yet again, this time doing it with their sinister looking Q60 Black S. The coupe from Nissan’s luxury arm features a drivetrain stuffed with racing technology borrowed from the Renault F1 program. This includes the F1-derived KERS system which lives in the Q60 to help propel the car alongside a 3.0-litre twin-turbo V6. Total ponies equates to about 500hp. It’ll need figures like that with such wild body work. More importantly Infiniti just needs to get this thing into production and stop teasing. 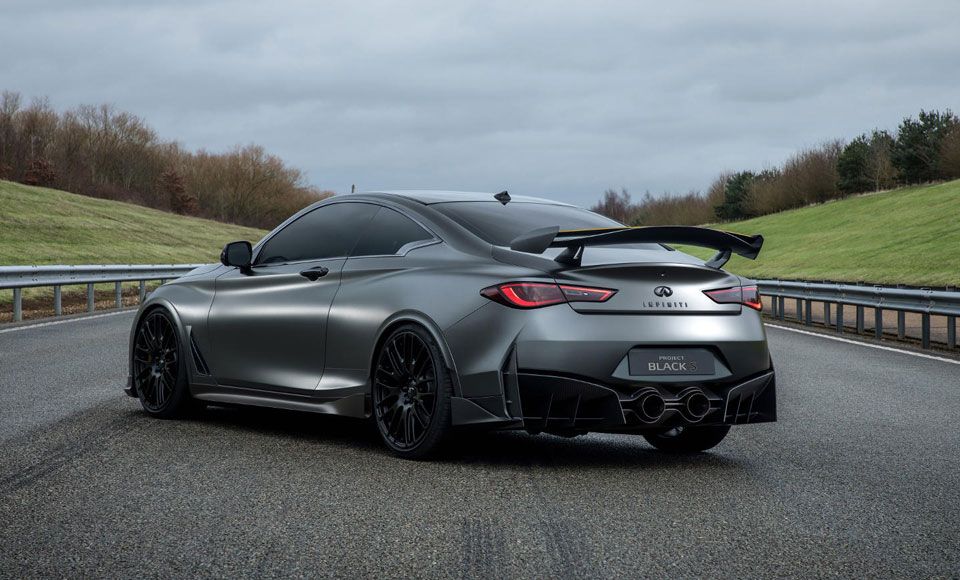 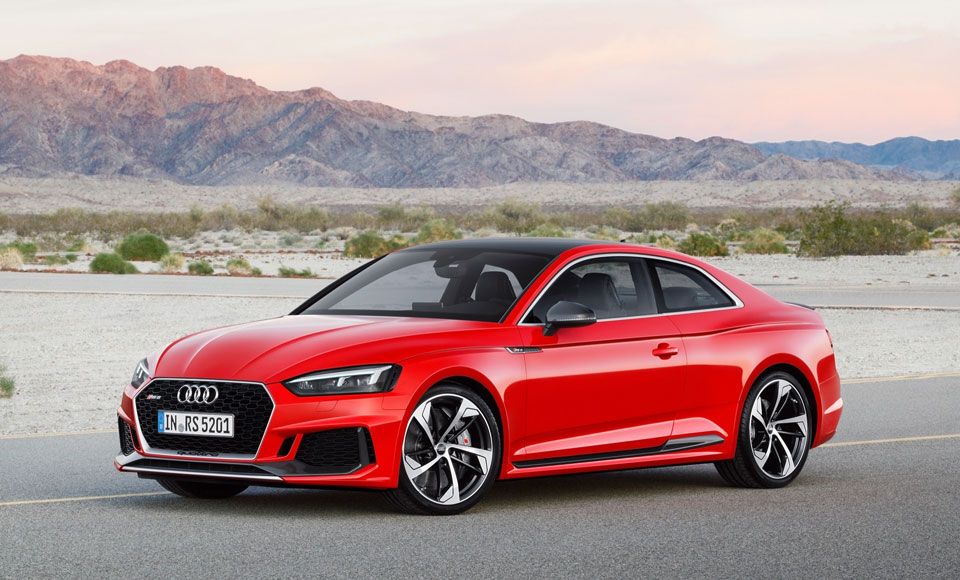 Audi have updated their RS5 for 2017 and it’s bolder, badder and even more powerful than before. In the power department the RS5 switches over from a naturally aspirated V8 to a Porsche-borrowed 2.9-litre twin-turbo V6 capable of 444hp. All of those ponies are sent to Audi’s Quattro all-wheel-drive system to get things moving without sending you into a ditch. 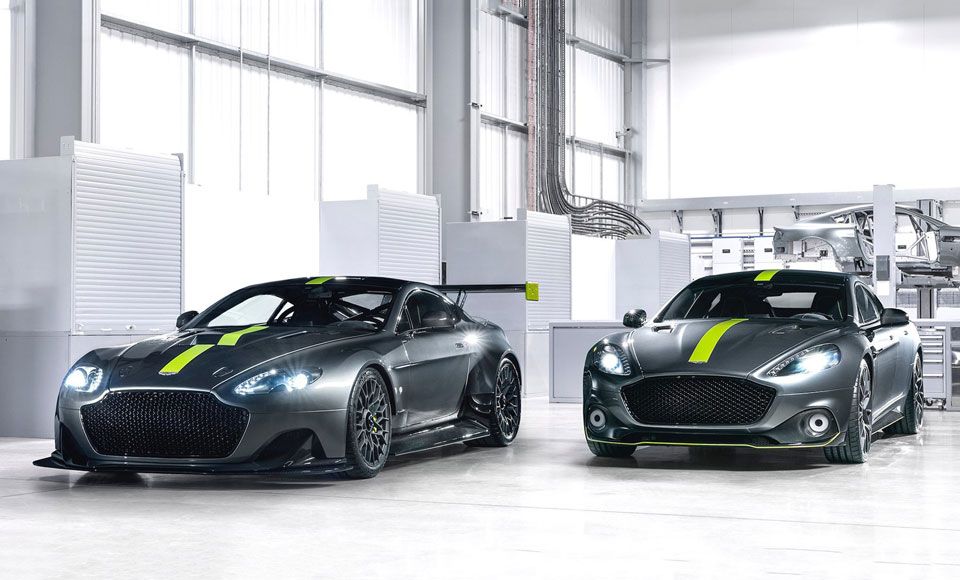 Besides finally giving their Red Bull Racing collaboration hypercar a new name (Valkyrie), Aston Martin also used Geneva to launch their new line of cars under the AMR banner. The goal of the new program is to draw further connections from Aston Martin’s racing programs to their road cars. This means upgrades in both the performance and design department to make their regular cars go faster just like their racing counterparts. The first two examples to roll out of AMR is what you see here, the 592hp Rapide AMR and the 500hp Vantage AMR Pro. The latter will be a track-only car with production limited to just seven examples. The Rapide AMR will get a run of 210 units.