Start with a smile, calibrate your enthusiasm, keep it kid-friendly, and other essential rules of airplane conversation etiquette for the chatty gentleman. 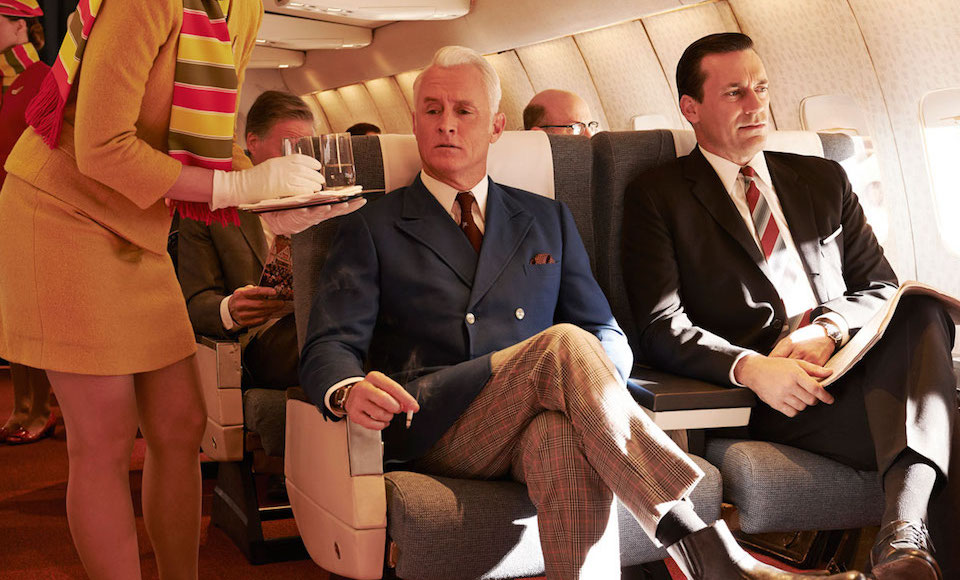 According to science, small talk with strangers is good for your productivity and mental health

Decades ago, air travel wasn’t just a way to get from A to B – it was an experience. Passengers dressed up and snapped group photos before boarding. Meals were served. Alcohol was free. Leg room was ample, knives were real, and security lines were nonexistent.

Today’s passengers face a different story. Flying in the 21st century is more ‘ordeal’ than ‘affair’ – a relentless barrage of agony in the form of overcrowding, armrest jostling, inedible food, invasive security, and that most heinous of offenders, the chatterbox neighbour who won’t take a goddamn hint.

Despite our obsession with oversharing to strangers on social media, we’re less than enthusiastic about chatty seatmates on airplanes. We’d rather elaborately fake an illness than have to make nice with Talkative Tommy.

But science says conversing with strangers can actually be good for your mental health and your productivity, and deep down, you know completely quiet flights would get boring quickly. Save the silence for wealthy white women on spiritual retreats.

Whether you’re happy to chat or desperate to remain undisturbed, these are the rules for airplane conversation etiquette every man should follow.

Set a foundation for friendliness as soon as possible. Don’t be impatient in the boarding line. Do your neighbour a favour – like helping put heavy luggage in the overhead compartment – if you can. Don’t leave your crap in their seat. The nicer you can be upfront, the nicer they’re likely to be later – whether that means making small talk if you’re feeling chatty or politely shushing if you ask them to keep it down.

Start With A Smile

You don’t have to be a body language expert to read this easy sign. Make eye contact (not the creepy kind) and flash your seatmate a smile. Throw in a “hi” if you’re feeling audacious. Then watch how they respond. A person who returns the gesture is more likely to be open to a conversation than someone who doesn’t.

Don’t be these dogs. If your neighbour isn’t in the mood for making friends, no amount of enthusiasm from you will change their mind. It’s your job as the conversation initiator to accurately assess the situation and adjust your eagerness accordingly. One word answers or caveman grunts are not a green light to unleash the saga of your recent health issues on an unwilling participant. If they’re engaging with full sentences and attentive questions, on the other hand, you’re free to tell them all about your hemorrhoids.

Remember that the person next to you is a captive audience with no escape short of a parachute and the emergency door. You are trapped together in cramped quarters for the duration of your flight, so keep your conversation free of controversies. No politics, religion, offensive jokes, complaints about other passengers, or secrets of your sex life. If you wouldn’t say it over dinner with your in-laws, don’t say it to the neighbouring seat.

See above. If staying off the sauce is the only way to ensure you don’t soliloquise on any of those subjects, just say no to those itty-bitty bottles. We guarantee your seatmate isn’t as interested in the wayward exploits of your pecker as your douchebro buddies on 4chan and Reddit.

Air travel has a way of bringing out the worst in people. Passengers are tired, stressed, hangry, uncomfortable – almost no one is bringing their A-game, and you’re forgiven for feeling less than cheery while your knees are cramped up to your chin. But even if you’re not your usual ray-of-sunshine self, there’s no excuse for bombarding a neighbour’s unsuspecting ears with rants about the kids in the back or a flight attendant’s service. No one wants to be friends with the dick in 23D.

Don’t Take It Too Far

The beauty of the airplane conversation is its ephemeral nature. You will probably never see that person again, and somehow there’s a little bit of magic in that. Don’t ruin it by trying to extend the moment beyond what it’s meant to be. Only in rare circumstances should you attempt to exchange contact info (and if your seatmate happens to be attractive, under even rarer circumstances should “exchange contact info” mean “try to hookup in the lavatory”).

Respect Thy (Other) Neighbours

Just because the person next to you wants to chat, doesn’t mean everyone else around you wants in. Keep the volume to a considerate level.

When your chat begins to wane, as it inevitably will, let it go with grace. Don’t force a conversation to continue beyond its natural lifespan. End with a simple “It was nice meeting you, Name, I hope you enjoy your trip” and get back to watching yet another disappointing episode of Big Bang Theory as the airline gods intended.