The New World’s Hottest Chili Could Literally Kill You

A single drop of the capsicum oil in the Dragon’s Breath chili would be detectable in 2.48 million drops of water. 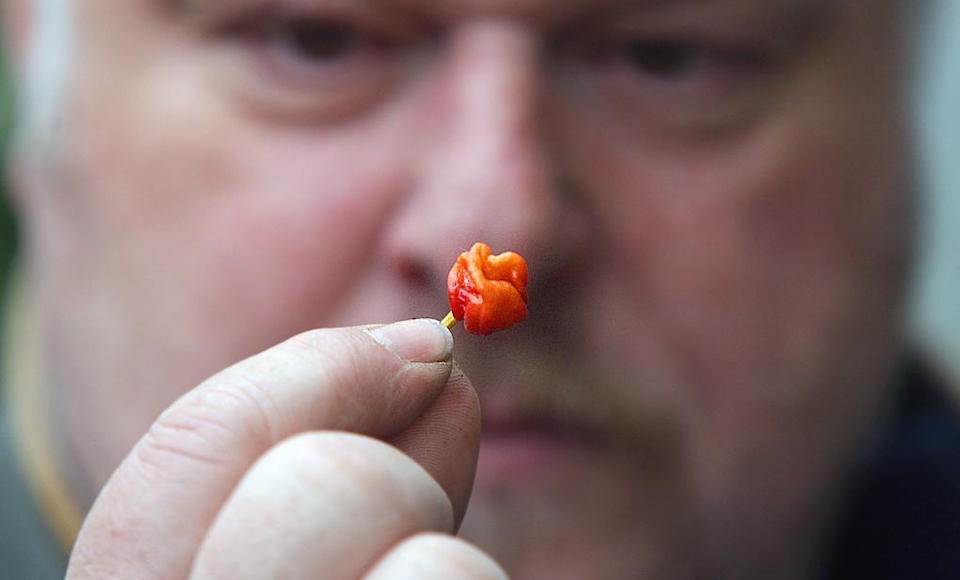 “Though she be but little, she is fierce.” -William Shakespeare

Don’t be fooled by the diminutive proportions of this unassuming pepper. Though it’s barely the size of a man’s fingertip, it packs a serious punch – so serious it could actually kill you if you eat it.

A Welsh horticulturist by the name of Mike Smith is the evil genius behind this devilish new pepper, dubbed the Dragon’s Breath chili. The pepper measures 2.48m on the Scoville scale, making it the new world’s hottest chili. A single drop of the capsicum oil in the Dragon’s Breath would be detectable in 2.48 million drops of water. The pepper is so potent that ingesting one could potentially send the eater into fatal anaphylactic shock after burning their airways so badly they closed up.

The Dragon’s Breath claims the title of world’s hottest chili from the previous record holder, the Carolina Reaper, which clocks in around 2.2m heat units. The average jalapeño pepper, for reference, only manages between 2,500 and 10,000 on the Scoville scale – practically a vacation for your tastebuds by comparison.

So what good is a pepper you can’t even eat? Believe it or not, there is a potential positive use for the Dragon’s Breath that isn’t smiting your enemies at a dinner party.

Because the oil from it is capable of numbing the skin, the chili was developed to be used as an alternative to anaesthetic in countries that do not have access to or money for the drug. It could also be used for patients who are allergic to standard anaesthetic.

The Dragon’s Breath chili is so potent that must be kept in a specially sealed container. It will be on display at the Chelsea Flower Show in London between May 23 and 27. This is definitely a “look but don’t touch” situation.