Signs You’re Getting Way Too Comfortable In Your Relationship

Yes, there is such thing as “too close.” 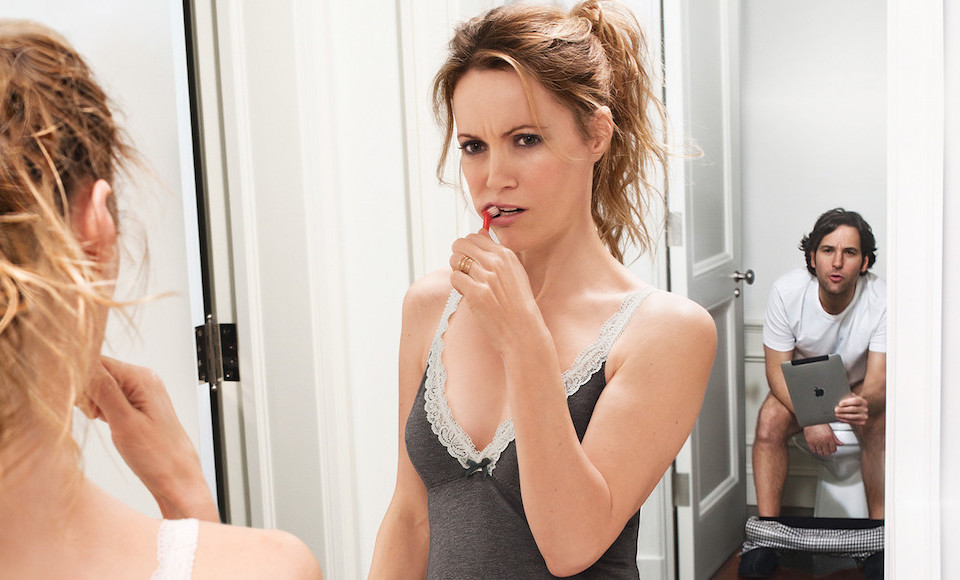 What not to do: anything you’ve seen in a Judd Apatow movie

At the beginning of a relationship, you’re on boy scout behaviour. You shower and shave before every date, you pick up the tab, you clean before she comes over and delete your search history just in case she borrows your computer.

As months pass and you’re still tolerating each other’s existence, you begin to get fuzzy on your boundaries, and by the time the honeymoon phase is over, all bets are off. Comfort outweighs sexiness or the need to impress, so out go the niceties and in come the morning breath makeouts and pube-clogged shower drains.

If you and your partner have no problem letting the dirty, disgusting, despicable things you once did in private become public affairs, it may be time to evaluate exactly how extensive your comfort zone is. Here are eight signs you’re too comfortable in your relationship and need to rekindle the mystery.

You Only Fit In Your Fat Jeans

You thought fat jeans were just a trope in women’s magazines? You’ll think differently when your formerly svelte self suddenly pulls a Lenny Kravitz while trying to squeeze into your favourite 501s. While a little weight gain is normal in a relationship – and some would even say it’s a good sign – happy couplehood is no excuse to turn into a lazy bastard. Take care of your health and make sure the only muffin tops in your house belong to actual breakfast pastries.

First you go out of your way to make sure each other never sees, hears, or smells anything that reveals you’re humans and not genitalia-less Barbie and Ken dolls. When you do start farting and belching openly, each infraction is followed by profuse apologies. But then before you know it, all manners have gone up in a cloud of flatulence and every unappealing bodily function you can think of is now for public couple consumption. Talking about your mutual constipation is the height of intimacy.

Your Hobbies Include Popping Pimples And Peeling Sunburns

Grooming each other like apes is appropriate under very few conditions (namely: when you’re an ape). Back in the day, your idea of a fun time together involved romantic dinners and sneaky hookups in public places. Now it’s helping each other peel crusty sunburns and pop hard-to-reach pimples. Who says romance is dead?

You Have Conversations In The Bathroom

This offense occurs in many forms: phone calls from the toilet, texting from the toilet, peeing with the door open, peeing while someone is in the shower, peeing in the shower while you’re showering together, and, well, we won’t talk about anything beyond urination – you get the point. Some couples wear their social bathroom habits as a badge of pride, but unless you’re Trump in a Russian hotel room, some things are better off not being shared.

It’s hard to stay passionate when the most romantic thing you’ve done for each other recently was passing the soy sauce packet from your day-old sushi. It’s not that we don’t appreciate a good night in, but if all your nights are in, it’s time to shake things up in the name of keeping the spark alive. At least go out to a movie instead of torrenting Fifty Shades Of Grey (again).

Your Netflix No Longer Comes With Chill

Remember sex? That thing you used to do back when you could both be bothered to shower every day and groom your pubes? These days the closest you get to doing the deed is watching raunchy Game Of Thrones scenes on YouTube. Or, if you are lucky enough to still be getting lucky, the sex has become so predictable it could practically be choreographed. Any day now, you expect a director to burst through the door yelling “Cut!”

You Never Try To Impress Each Other

A long-term relationship is not an excuse to let everything go. One of the major perks of couplehood is not needing to be red carpet ready at all times, but that doesn’t give you carte blanche to look homeless. Don’t forego basic hygiene and schlump around in hole-riddled tighty-whiteys just because you’ve found someone who doesn’t recoil at the sight of you naked. You both deserve better. Get things under control before you reach the point of no return.

You Only Own One Shared Toothbrush

No, you’re not “saving money.” It’s weird and we’re judging you.