The American DJ opens up the doors to ‘Aoki’s Playhouse’.

They like to do things big in Vegas but when this notion meets house DJ Steve Aoki, things can get a little…out there.

Spanning across 1,500 square metres of desert space in Las Vegas is Aoki’s personal blank canvas for his most audacious artistic expression – which also happens to double as a mansion.

The home came into Aoki’s possession in 2014 after it was built in 2008 at the height of the GFC. No one could afford the $12 million asking price so it languished around until it hit the auction block in 2014 for $3 million – cash offers only.

It was here that the home was brought to Aoki’s attention by a real estate friend of his.

“I didn’t really check under the hood. I just said, ‘I need to get this house,’” Aoki tells Architectural Digest. “And then I later checked under the hood and was like, ‘Holy s***. There’s a lot of work that needs to be done!’”

From here Aoki spent years and poured in even more millions to get the home up to his modernist standards.

“I skinned it, gutted it, changed everything. I took it to the bare shell of the walls and the floors. Well, not even the floors. I removed all the floors!”

Once the home was complete the electronic music DJ christened the space ‘Aoki’s Playhouse’.

The home itself is a sight to behold with Aoki explaining that he rarely ever brings people over unless he knows them since there’s a lot of expensive artwork and other priceless designer goods inside the home.

Think KAWS pieces and hero sculptures like the Banksy-made Mickey Mouse being eaten by a snake which was directly lifted from 2015’s Dismaland exhibit. Aoki calls this piece his “prized possession”.

Where most mansions sport a personal gym, Aoki converted his one for something a little less conventional. The one-time racquetball court is now a tricked-out space complete with giant trampoline, a foam pit and rope swing. The wall of the gym is also adorned with the work of a famous artist.

Even the initial theatre room was gutted and turned into Aoki’s own in-house studio called Neon Future Cave.

“When I walk into this room, I want to feel like I’m bunkering down. I’m gonna lock myself in this bunker, and the only way I’m going to open that door and go out is if I create something extraordinary.”

The outdoor space is highlighted with a pool which is arguably one of the deepest pits of water in Nevada.

“I like having deep, deep pools,” he told the publication. Aoki had to convince his contractor to dig deeper even against the growing risk of hitting a rock layer. Eventually they pulled it off and Aoki now has a five-metre deep pool with a silhouette of his face at the bottom. 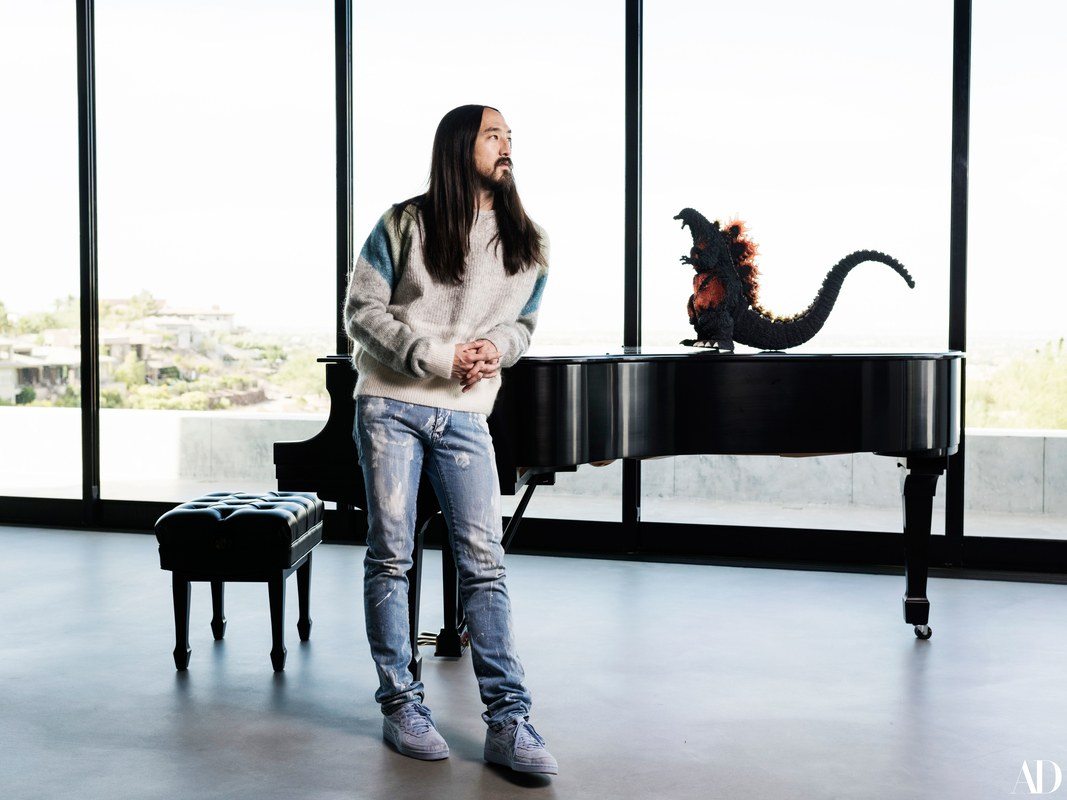