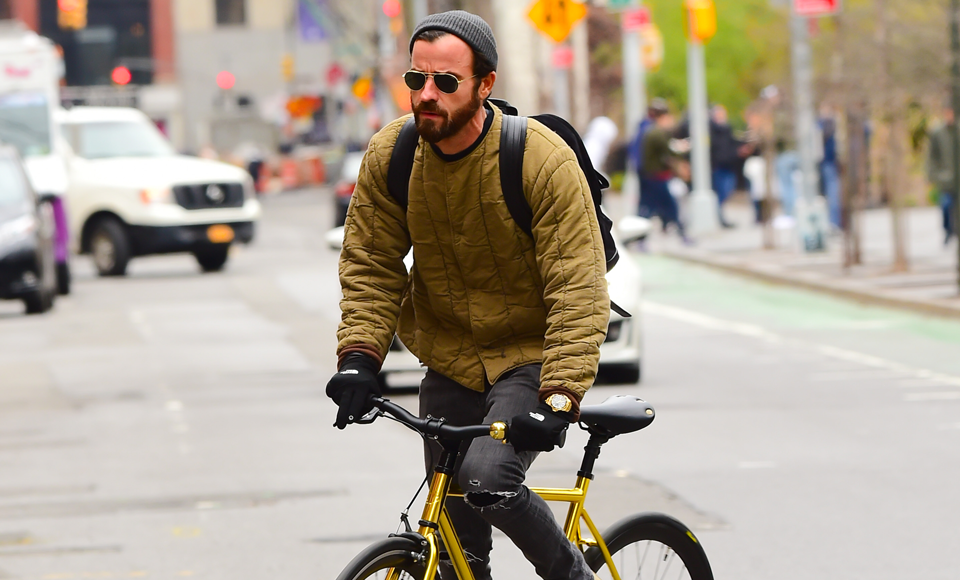 Cyclists. You either love them or hate them but there’s no doubt that when it comes to merging good fashion sense and two-wheeled antics in the urban jungle, men rarely ever get it right…unless your name is Justin Theroux.

The American actor and partner to Jennifer Aniston has been spotted over the past month pedalling around New York City in a number of killer looks worthy of putting any fluoro spandex fiend to shame.

A closer examination of Theroux’s cycling style reveals a chic modern hipster vibe without falling too far off the rails. More importantly it’s the perfect balance between function, to aid movement and brave the NYC cold, and fashion, to ensure he stands out in the sea of bike messengers and wannabe Cadels.

In his first look Theroux can be seen in a well-thought out ensemble which pairs a grey beanie with a chunky mustard bomber, black distressed denim and scarily enough, a pair of immaculate suede Common Project boots also in mustard (imagine the scuff marks after a week).

The awesome look is further backed by Theroux’s choice in wristcandy – a gold number which pairs beautifully with his gold framed fixie hiding a bright Supreme sticker. You go, closet hype beast guy. The look is finished off with a high-end labelled backpack complete with an oversized gold zipper.

Moving onto look number two, Theroux takes the camo jacket to the next level as he pairs it with skinny leg denim, black suede boots and a long line hoodie. Can this man do no wrong on two wheels?

But wait, there’s more. In our final Theroux fashion killer on wheels look we have the man going all-black for a very masculine-chic aesthetic. That’s achieved with a fleece bomber, black denim, boots and a cap from British streetwear label, Maharishi. And let’s not forget the centrepiece – a black Louis Vuitton messenger back pack.

RELATED: The Coolest Cycling Apparel Brands On The Planet 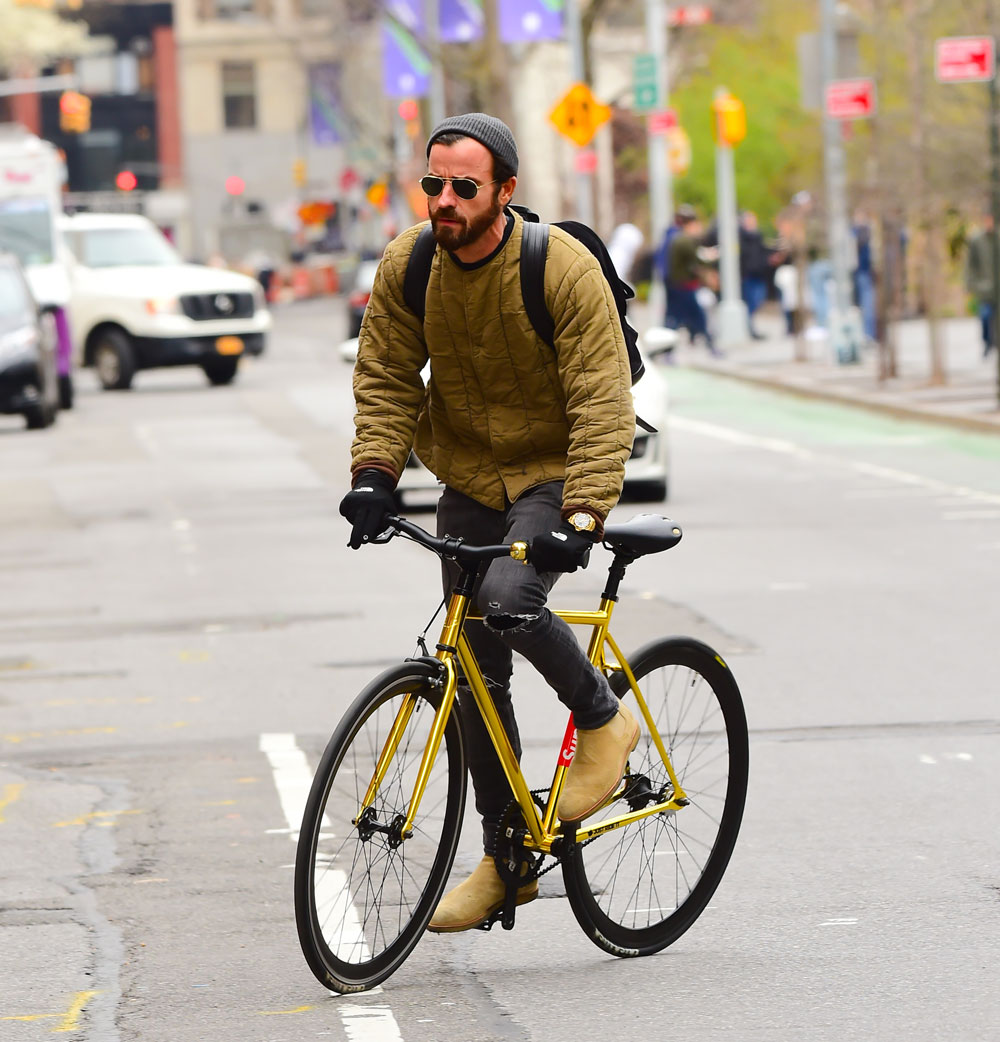 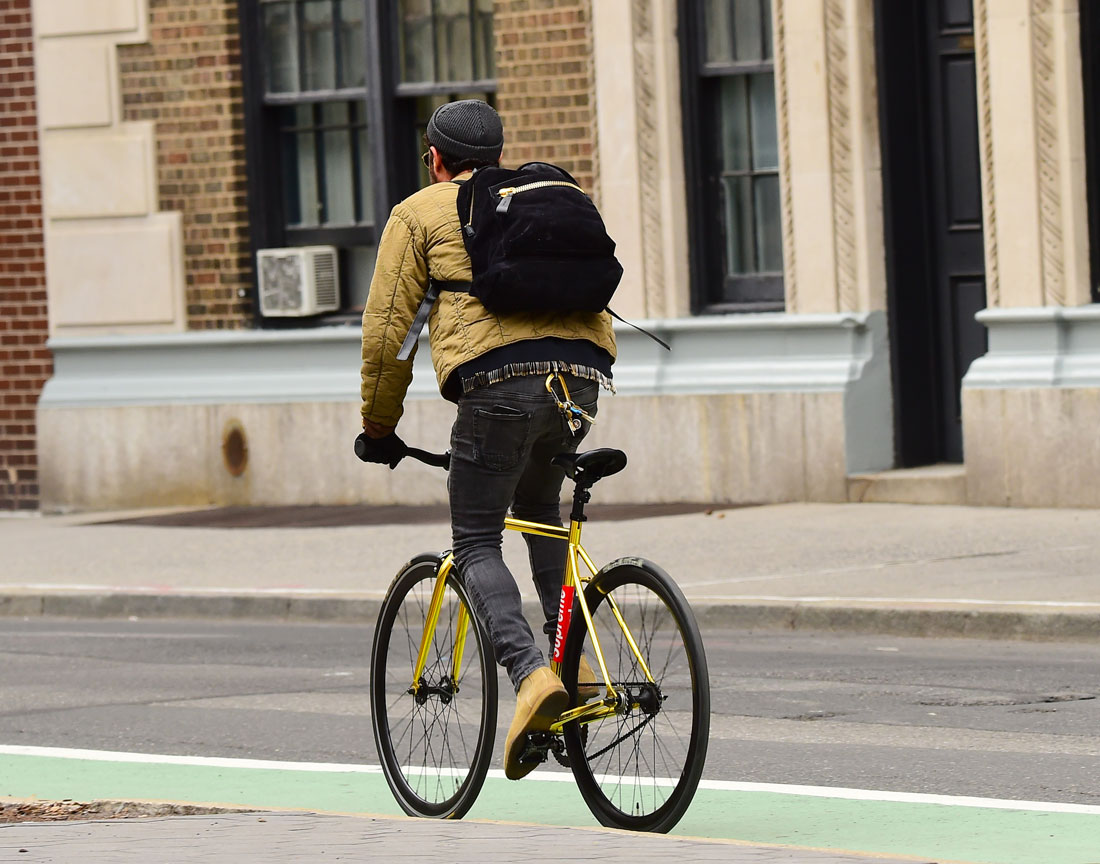 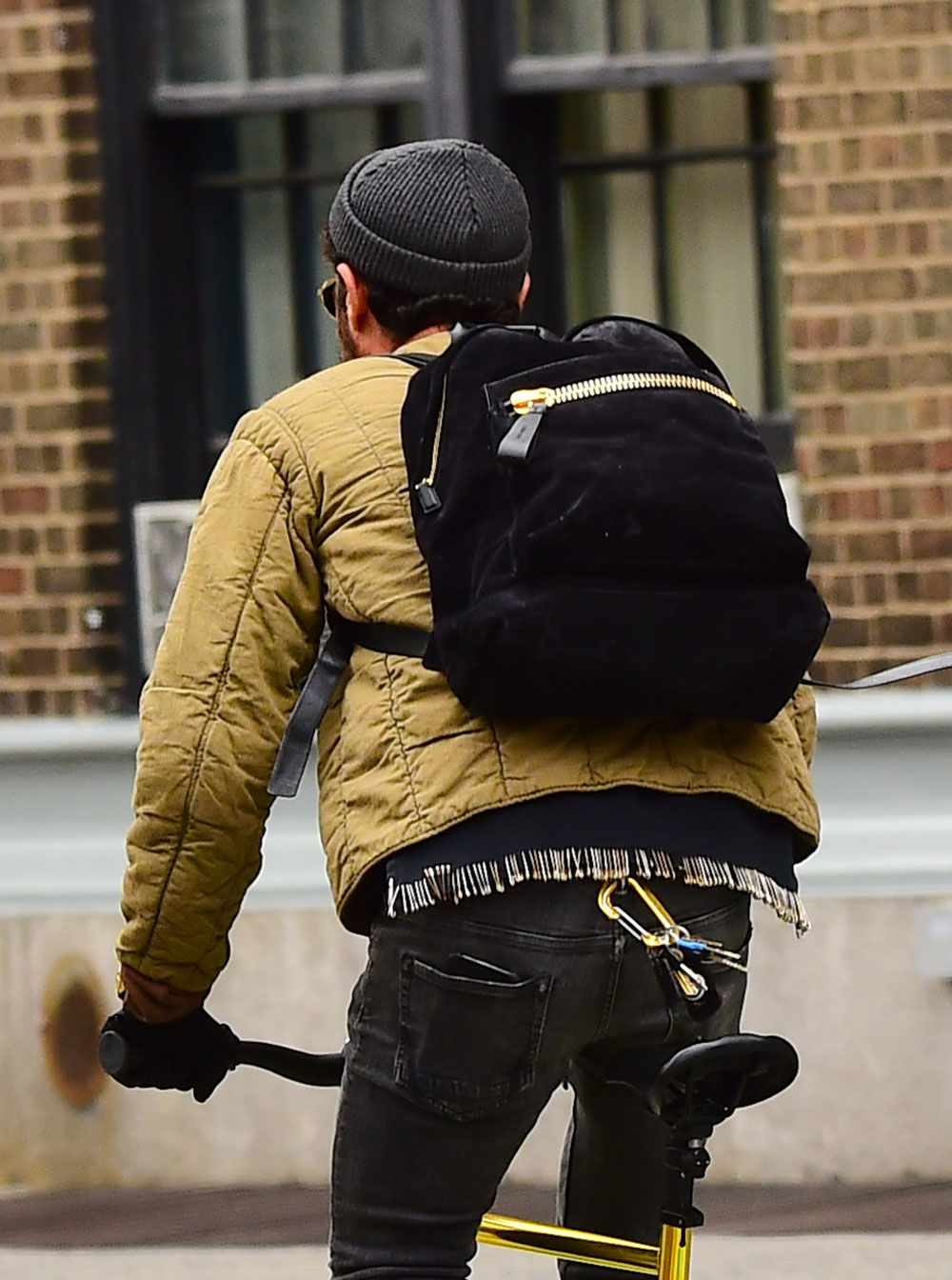 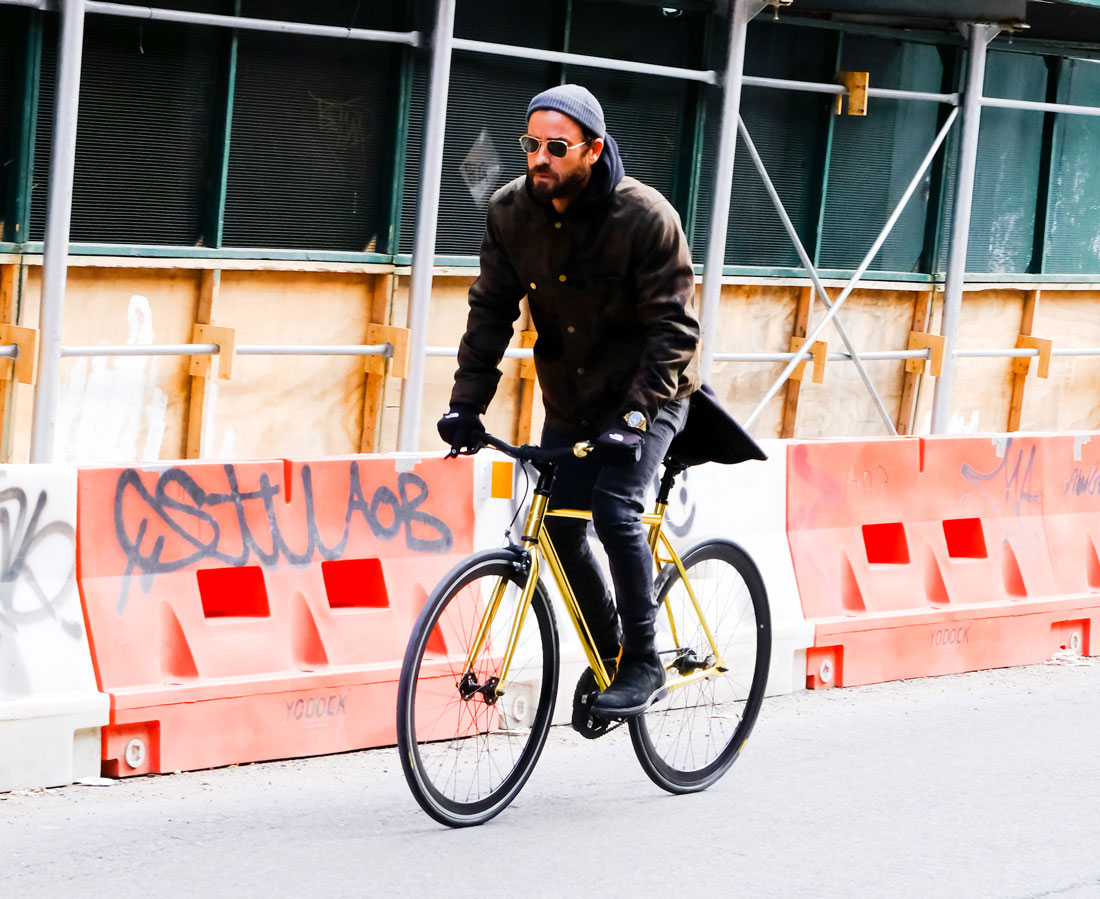 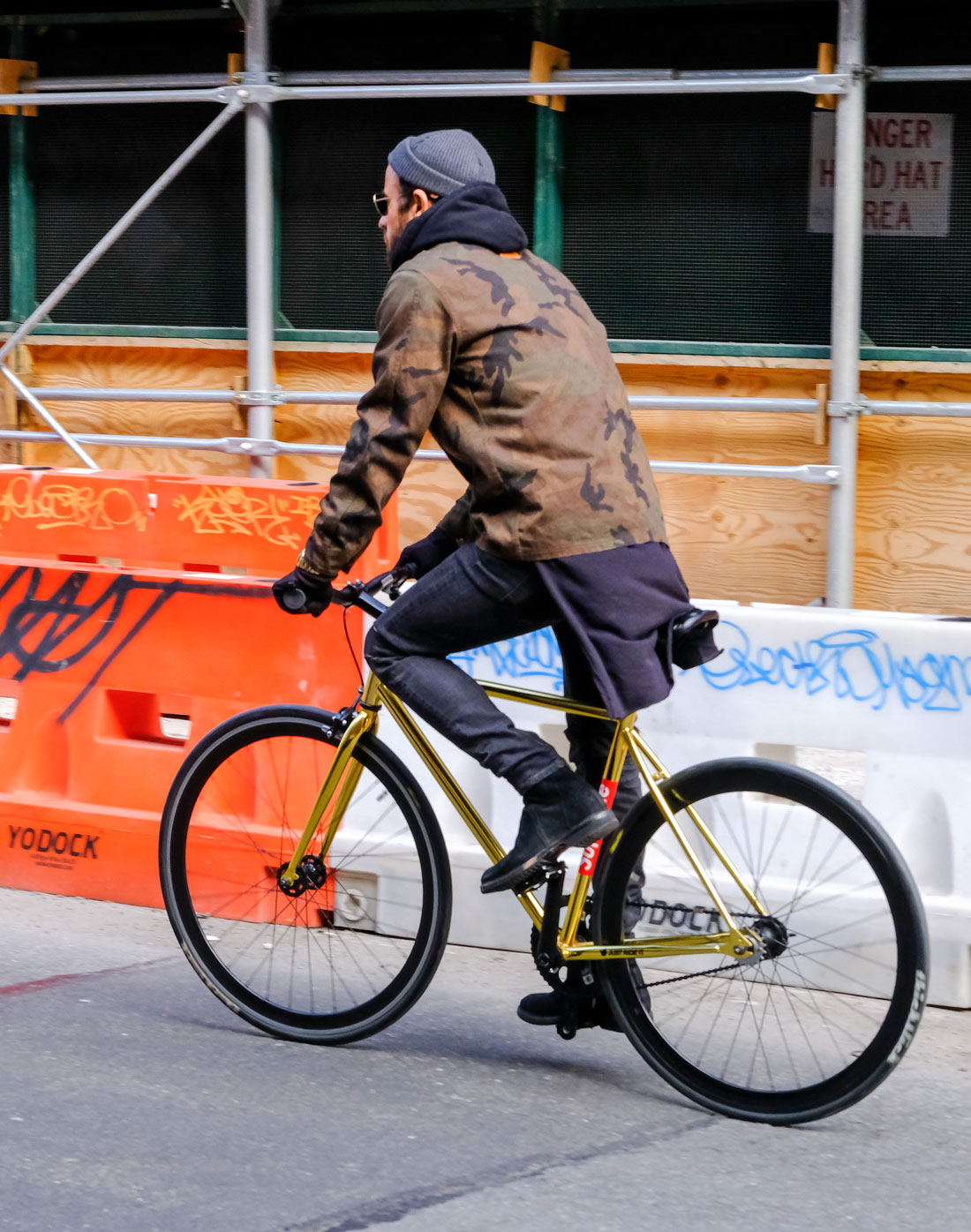 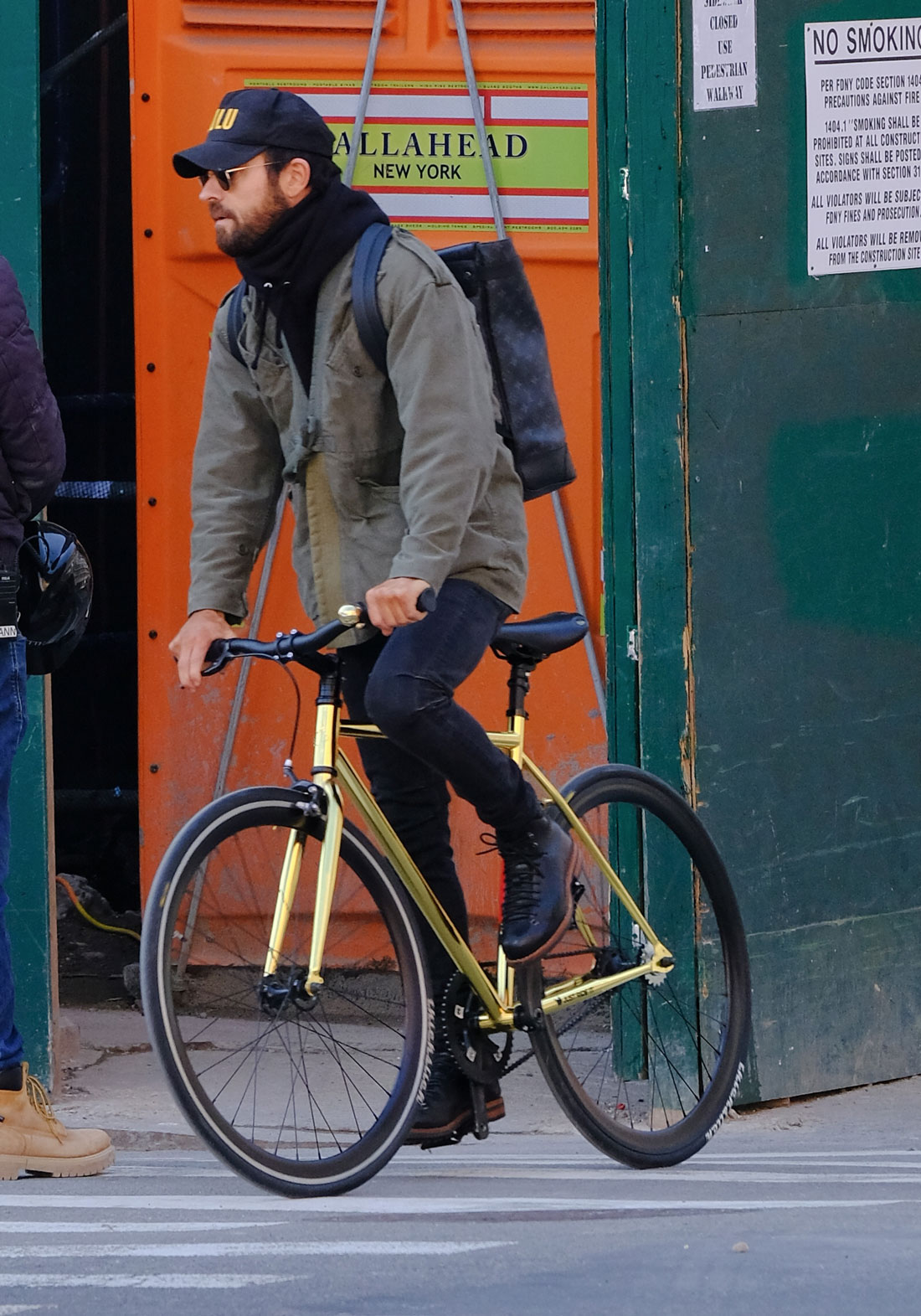 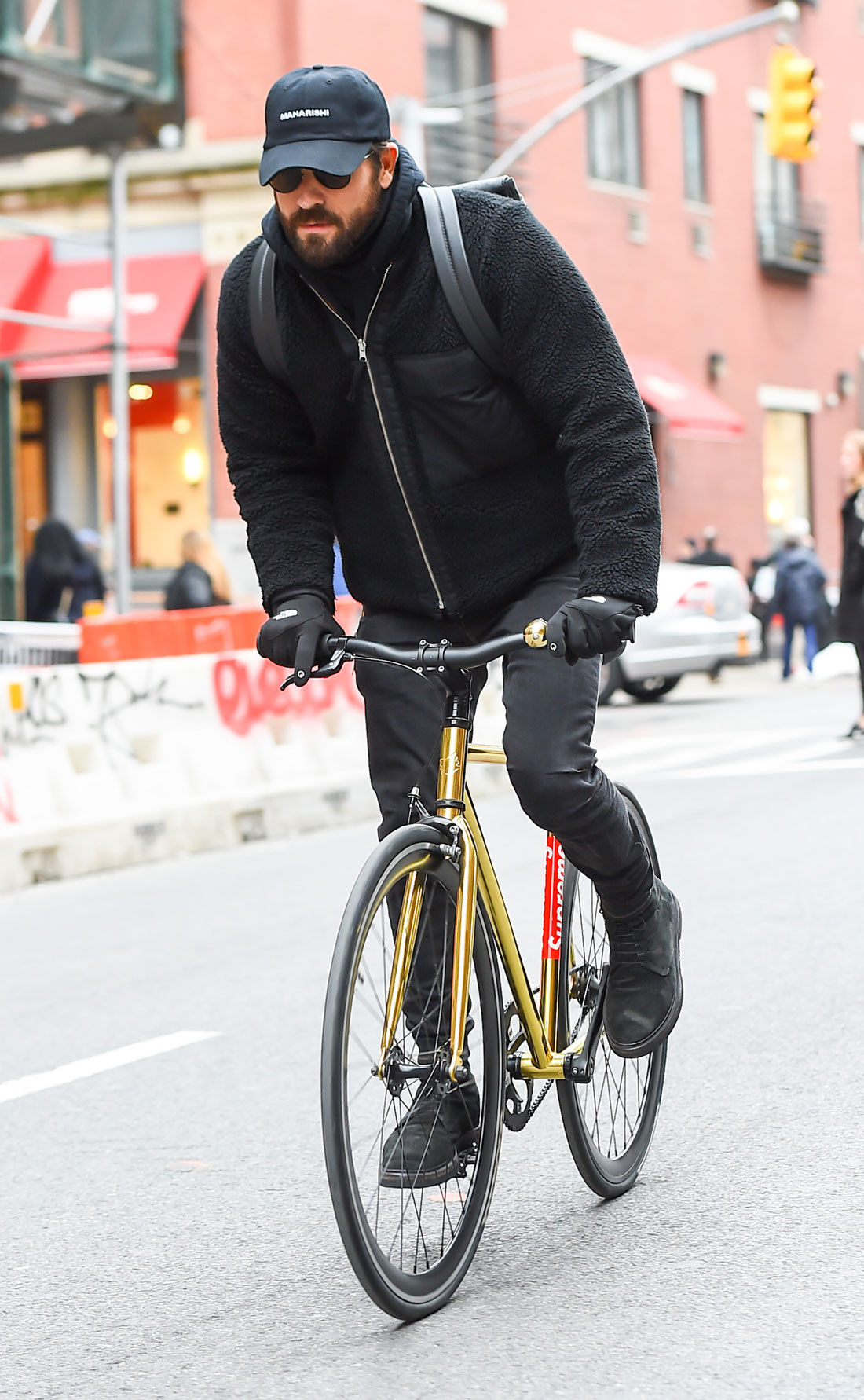 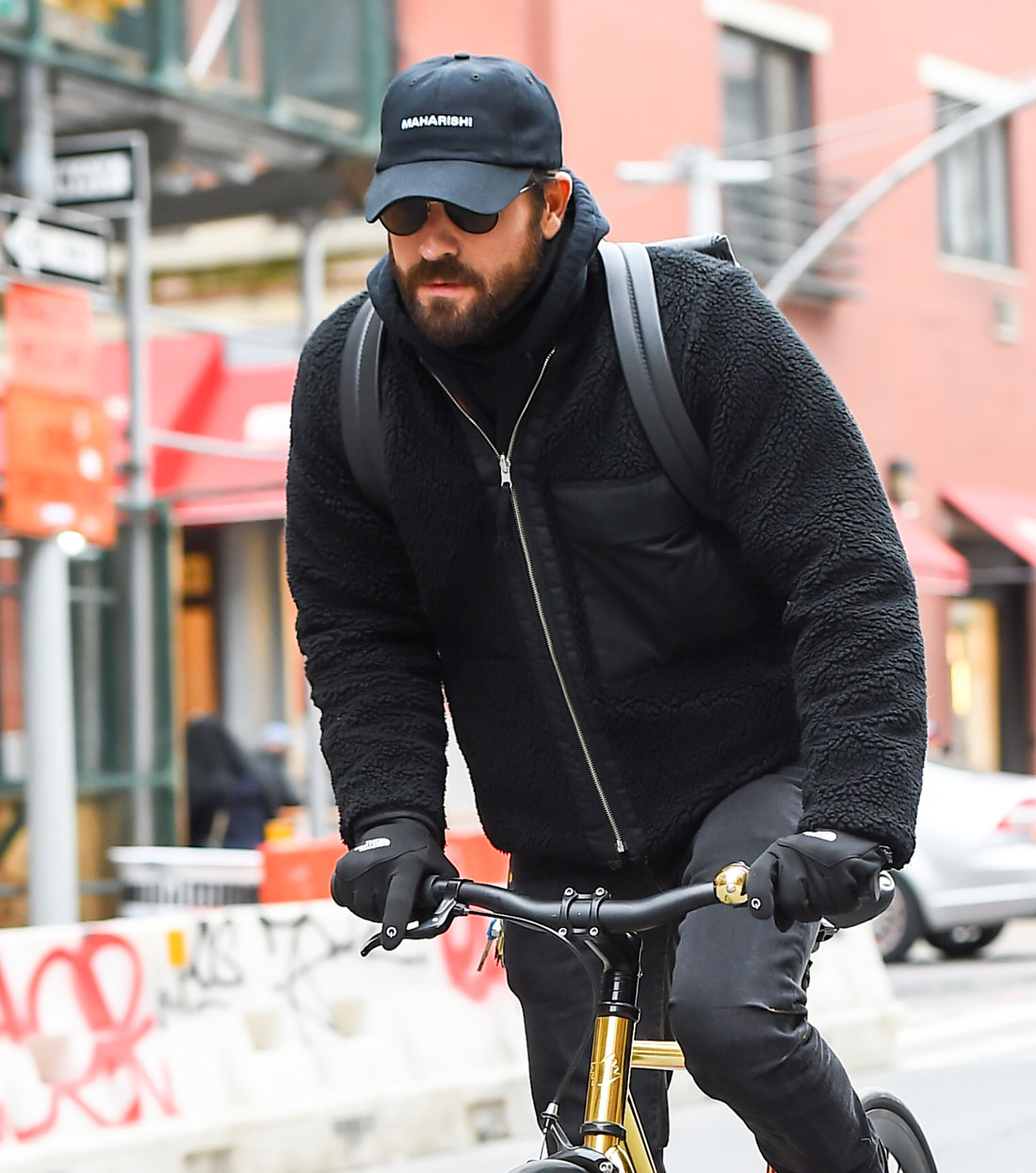 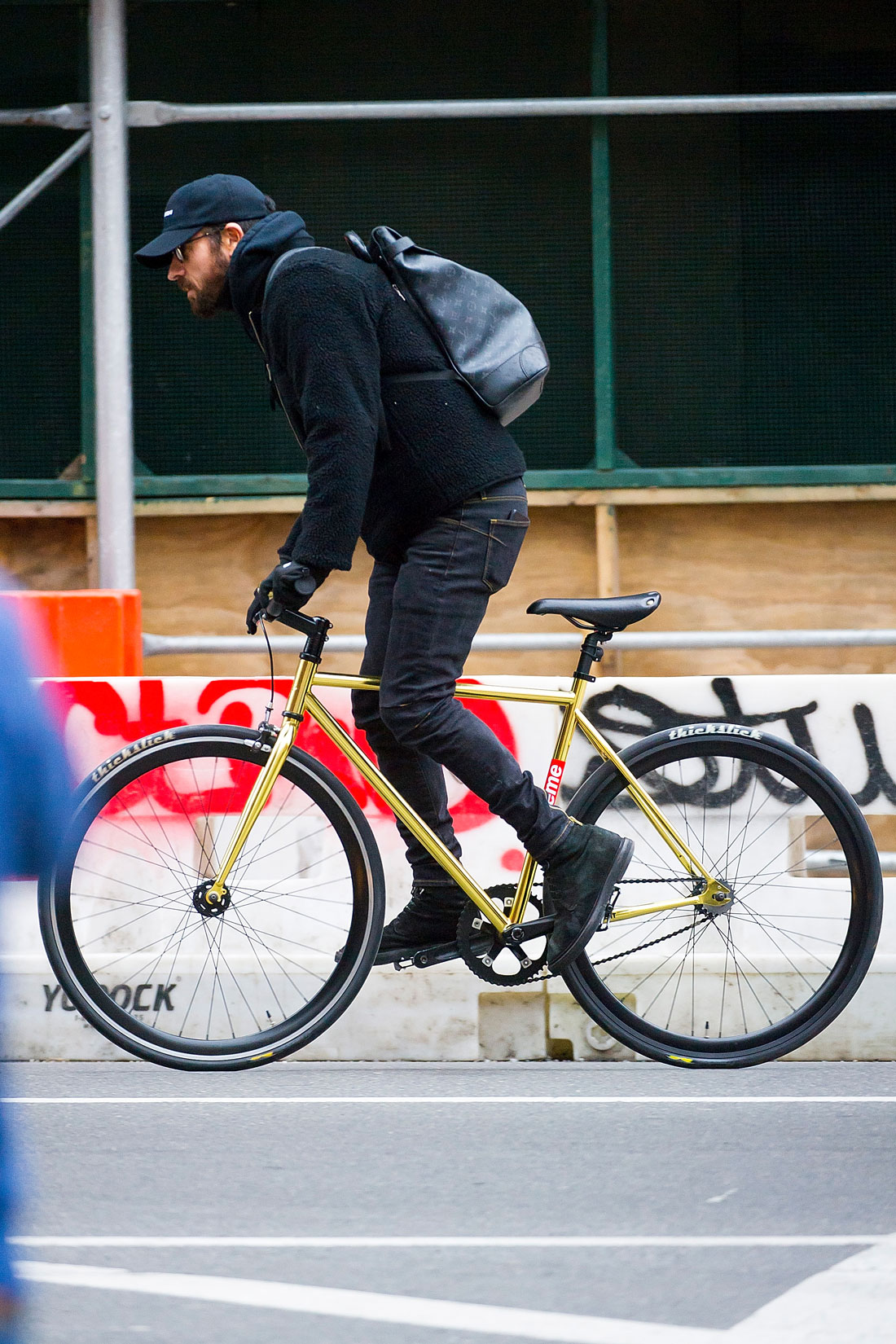 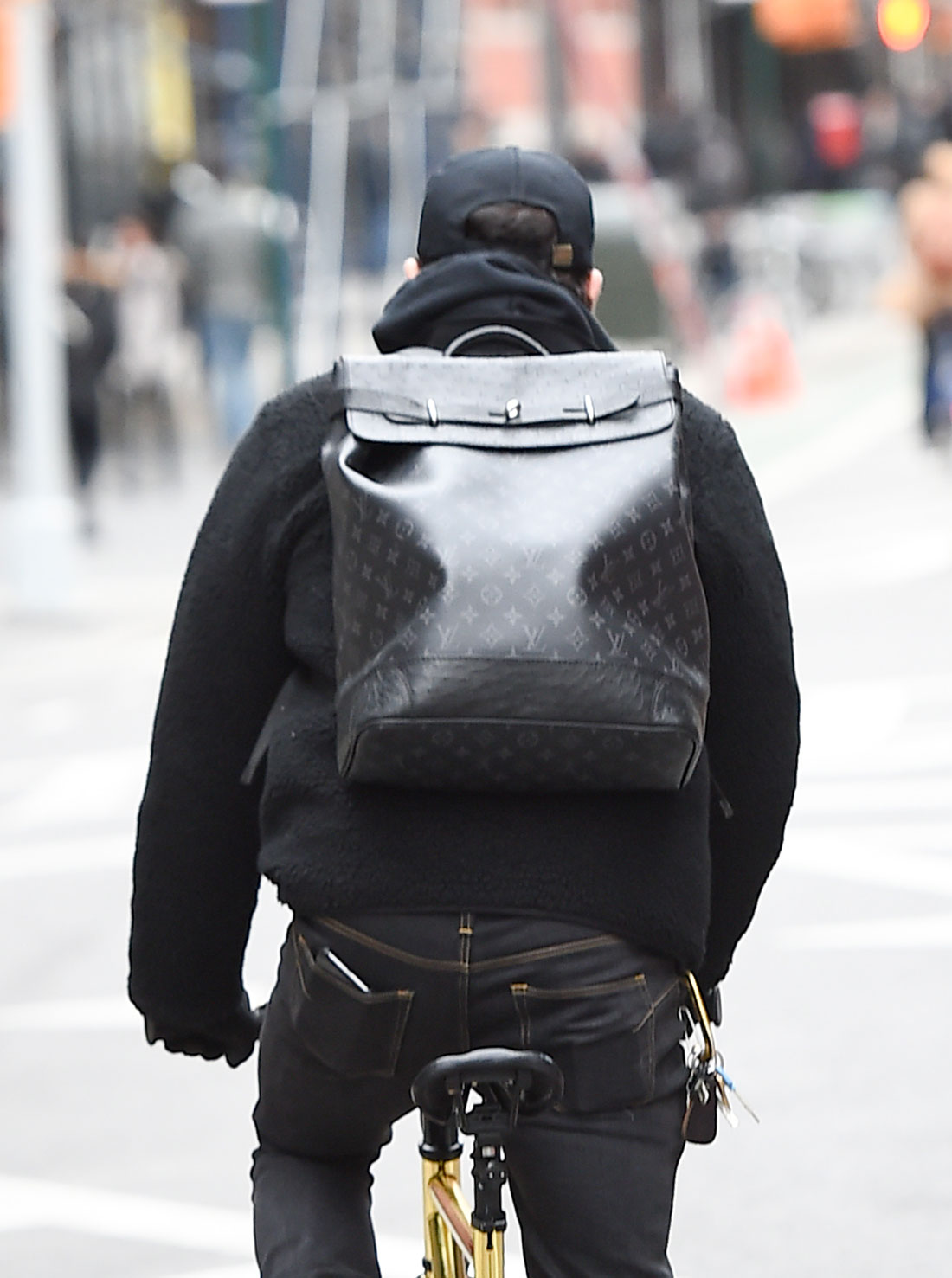 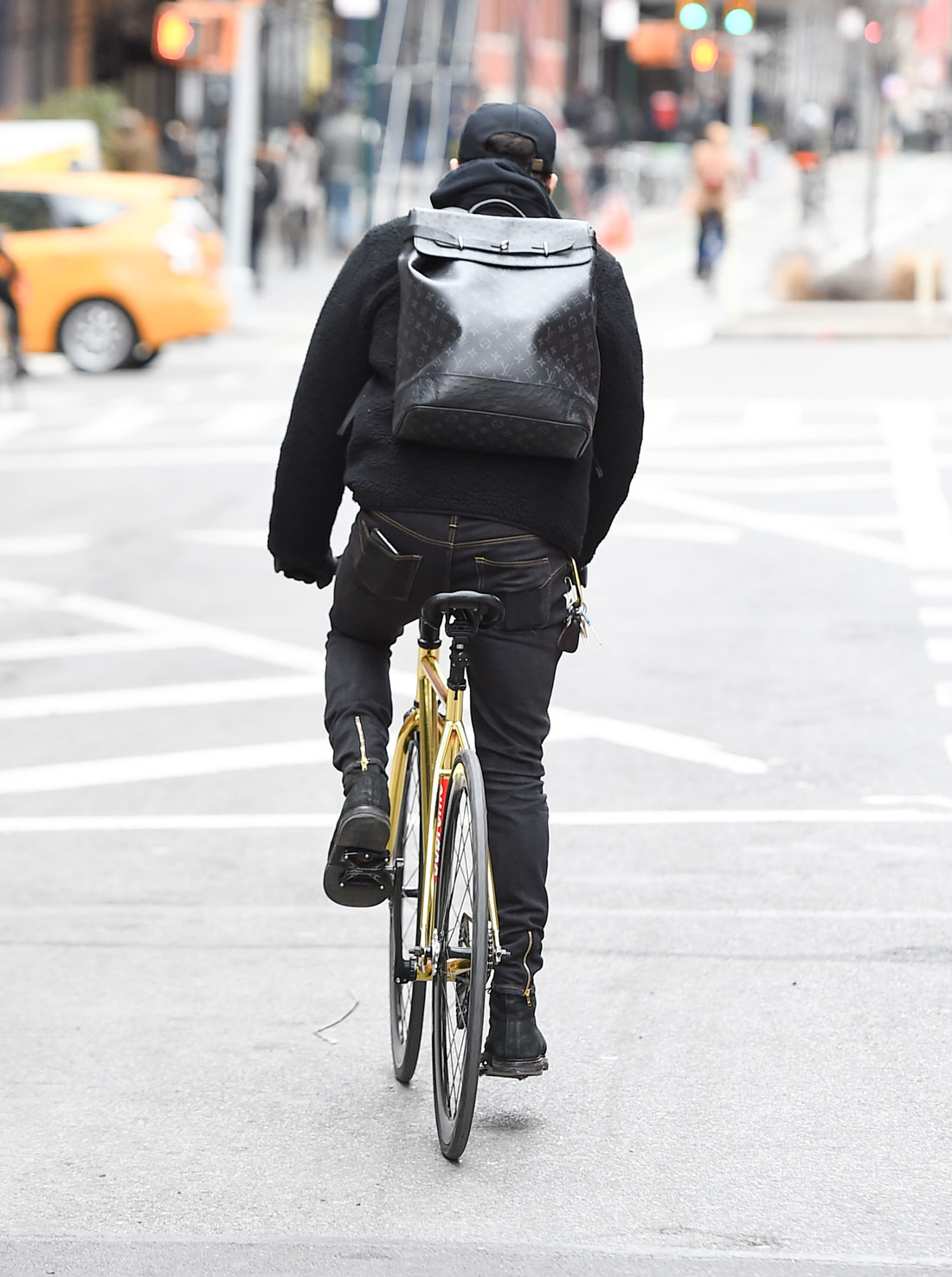