Lewis Hamilton’s Style Has Come A Long Way, Here’s How To Get His Look 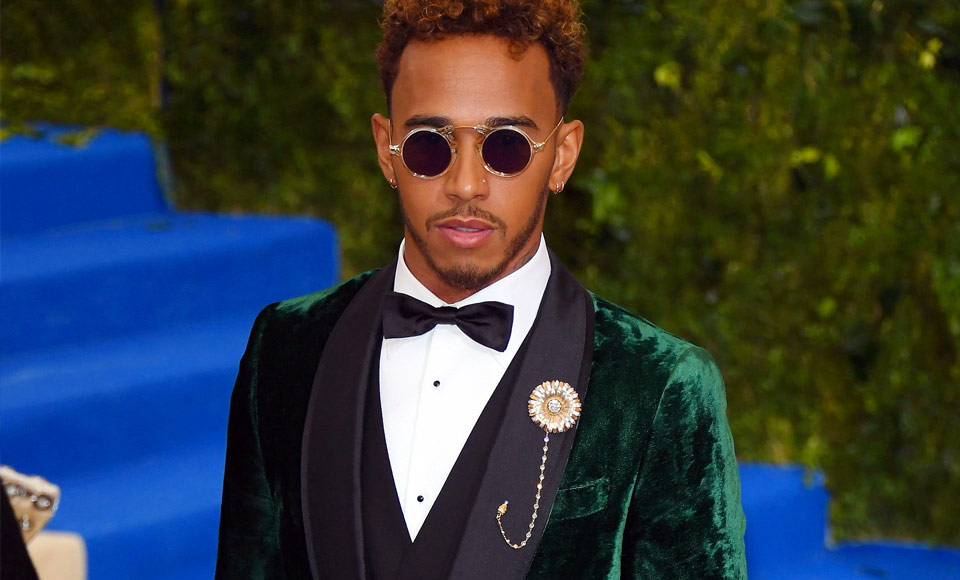 From London to New York, Lewis Hamilton has become a fixture on the men’s fashion week circuit.

He’s far from a fashion icon, but just like David Beckham many moons ago, Hamilton’s genuine consideration for clothes can only get better with time. And by attending more fashion week parties.

Hamilton does have his style judgers, cornering him for his whimsical approach to style. But his joyous, maximalist approach to fashion is a breath of fresh air in the sports arena, and sees him on the right course to become one of the world’s best-dressed sportsmen – after a bit of less-is-more becomes him.

His taste for prints is outlandish and bold, not to be outmatched by his colourful tailoring. But accessories is where this formula one star shines, speeding away in shades, a hat and statement chains, with hi-top luxury sneakers in hot pursuit. 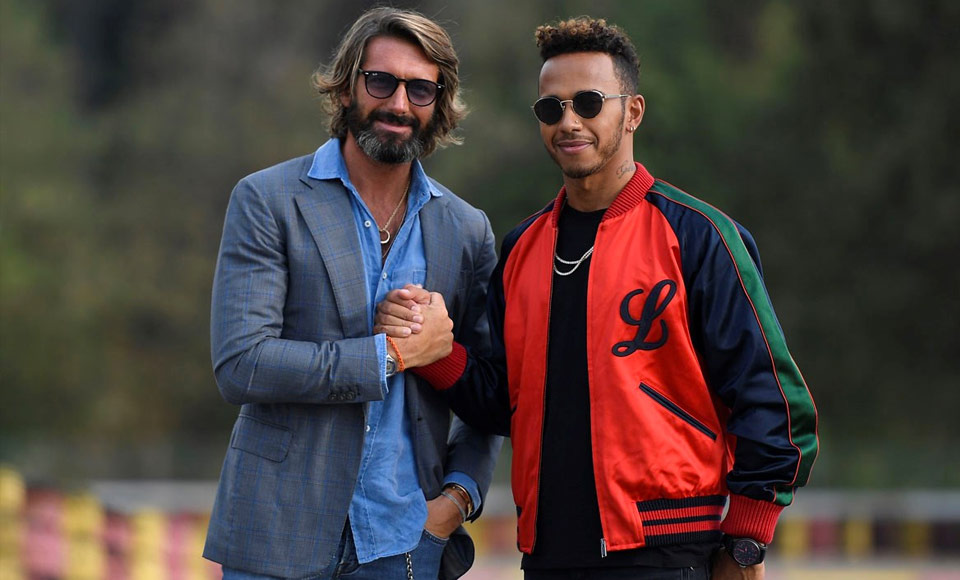 A driver of casual jackets, Hamilton founds his off-duty looks on the classic bomber or blouson coat, reimagined in fabric, fit and colour. At fashion week it’s an army affair, in an olive green bomber with contrast ribbing. The Breton shirt – another classic – becomes a street wear staple, over biker jeans in washed-out blue and army suede Chelsea boots.

Other times, the racer looks to summer with white jeans and the very-2015 wine red spilling onto the shirt. Leaving the button-down untucked, all sense of the south of France is lost, enforced with hardness of a black blouson jacket and street-y sneakers – replacing the traditional loafers or boat shoes. 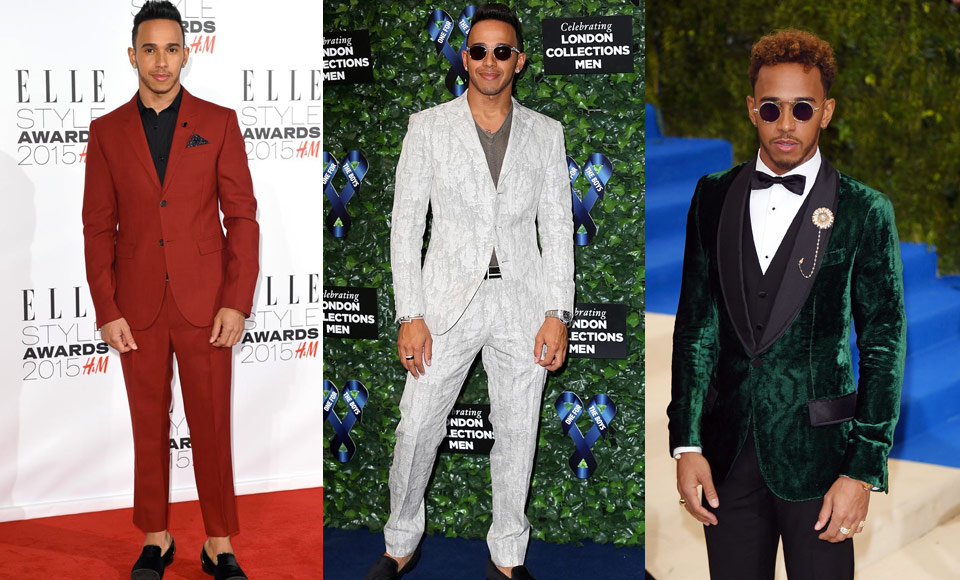 From the Elle Style Awards to the Richard James London show, Hamilton found many occasions this year to don a suit. Quite unlike the race-track, the single-breasted variety is always fashionably slim, with a cropped trouser in cotton/wool fabric, perfectly lightweight for summer.

Colour is also Hamilton’s forte, eschewing black or navy in favour of dark red and metallic teal. The driver’s getaway is his penchant for accessories: suede loafers (sometimes with studs), a polka dot pocket square and lapel pin creating a focal point – without a the need for tie, of course. 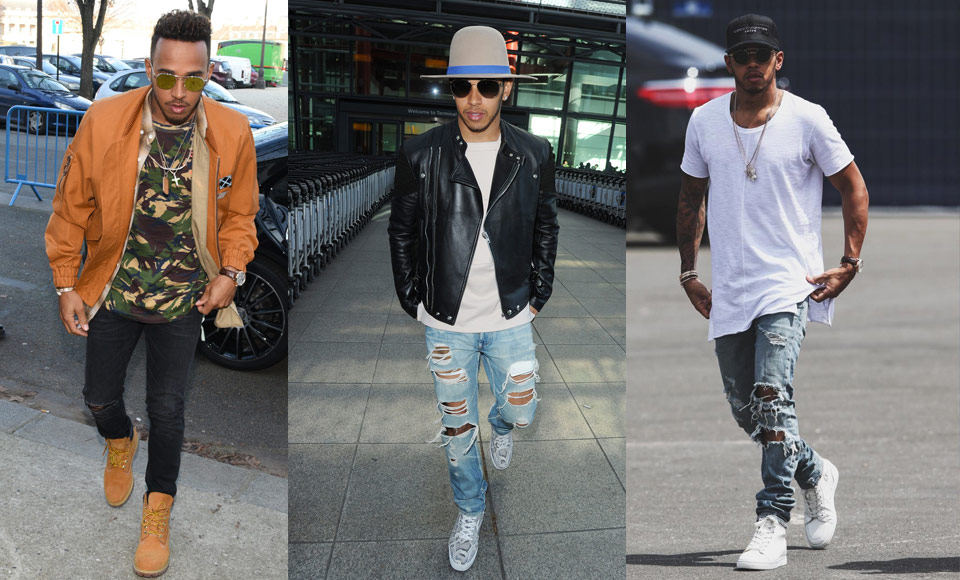 Not one to forgo his taste for nice things, Hamilton keeps even his most chilled street looks very luxurious. A fan of longline, t-shirts hang past the waist – inspired by the original skate and b-ballers in the Nineties – over hi-top sneakers in patent leather or matte white.

Hamilton likes tonal dressing too, matching his bi-coloured outerwear to his bottoms and shoes with either a marbled or brocade effect, referencing the future and past, depending on the mood. 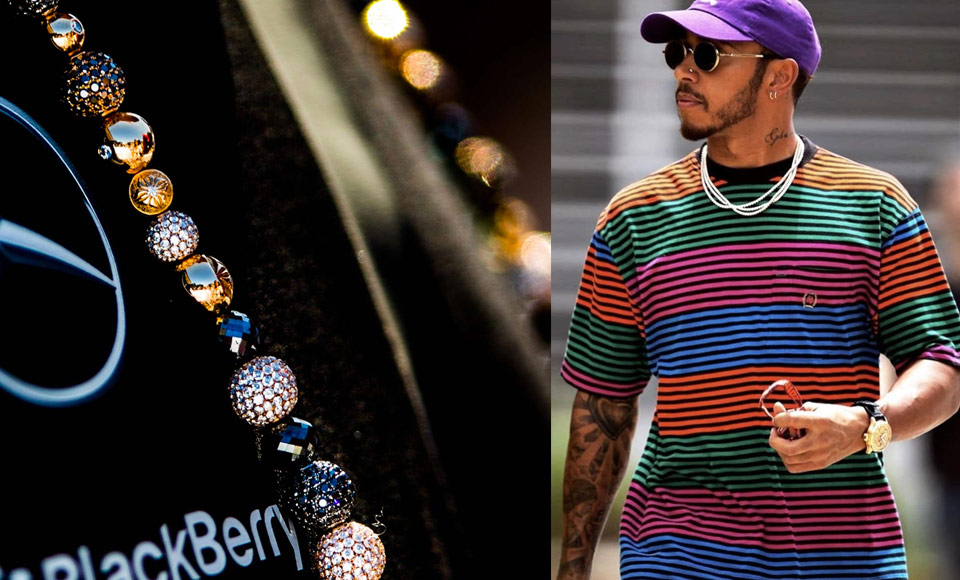 When Hamilton is determined to turn fashion heads, he goes all-in. Bling and prints are his signature combination, underpinned by the felt fedora hat which he owns in an array of muted colours.

The silver chain is far less bling-y than the chunkier gold variety, popping the metal in a black, contrast leather and suede moto jacket; the racing stripes on the white denim giving Hamilton soon extra vroom.

The giant hibiscus print should be enough on its own over a plain white tee (minus the gold) and again those knee-shredded jeans, which feel very Kanye West-inspired, make their claim. The gold chain is a reflection of the far-better looking mirrored lenses, crafted as Hamilton’s go-to round sunnies.

Accessories: Round sunglasses from Simon Miller or Our Legacy; neck chain from Acne Studios and fedora from Blue Blue Japan or Undercover. 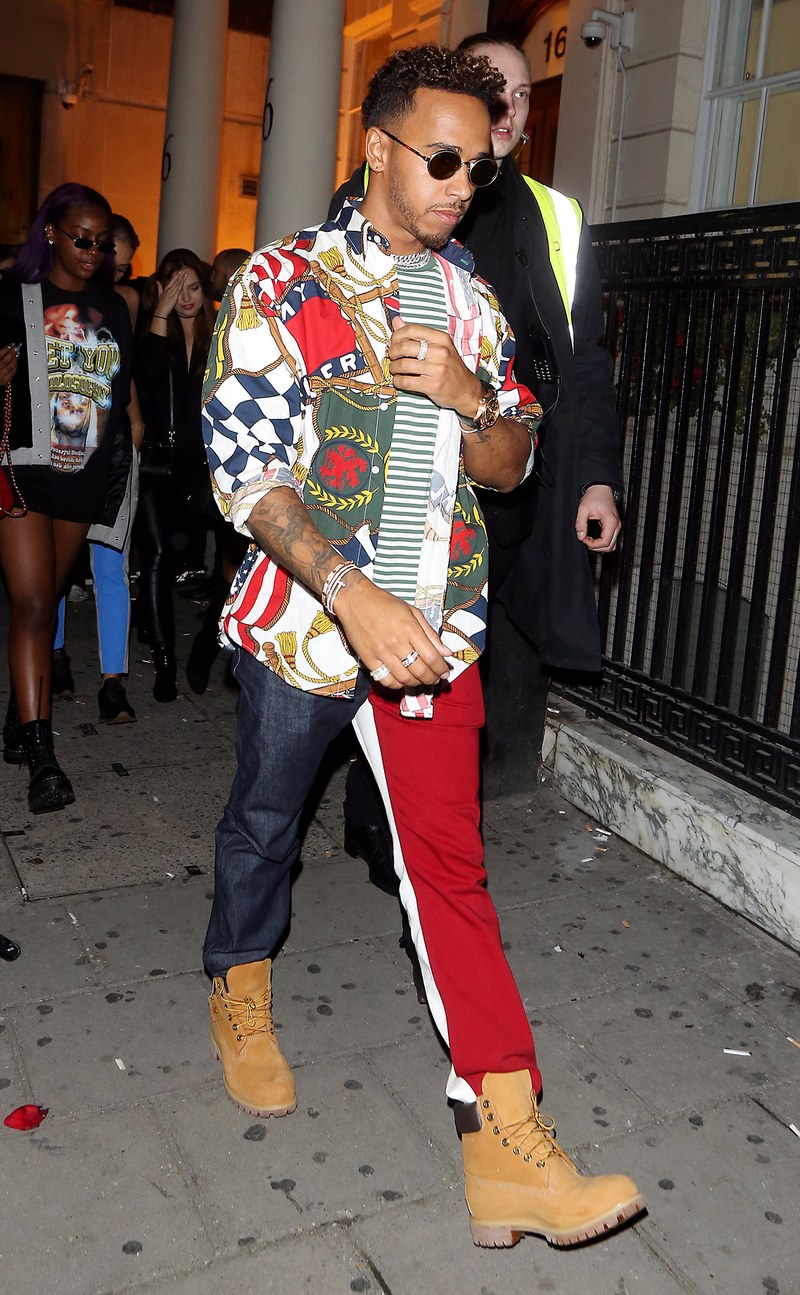 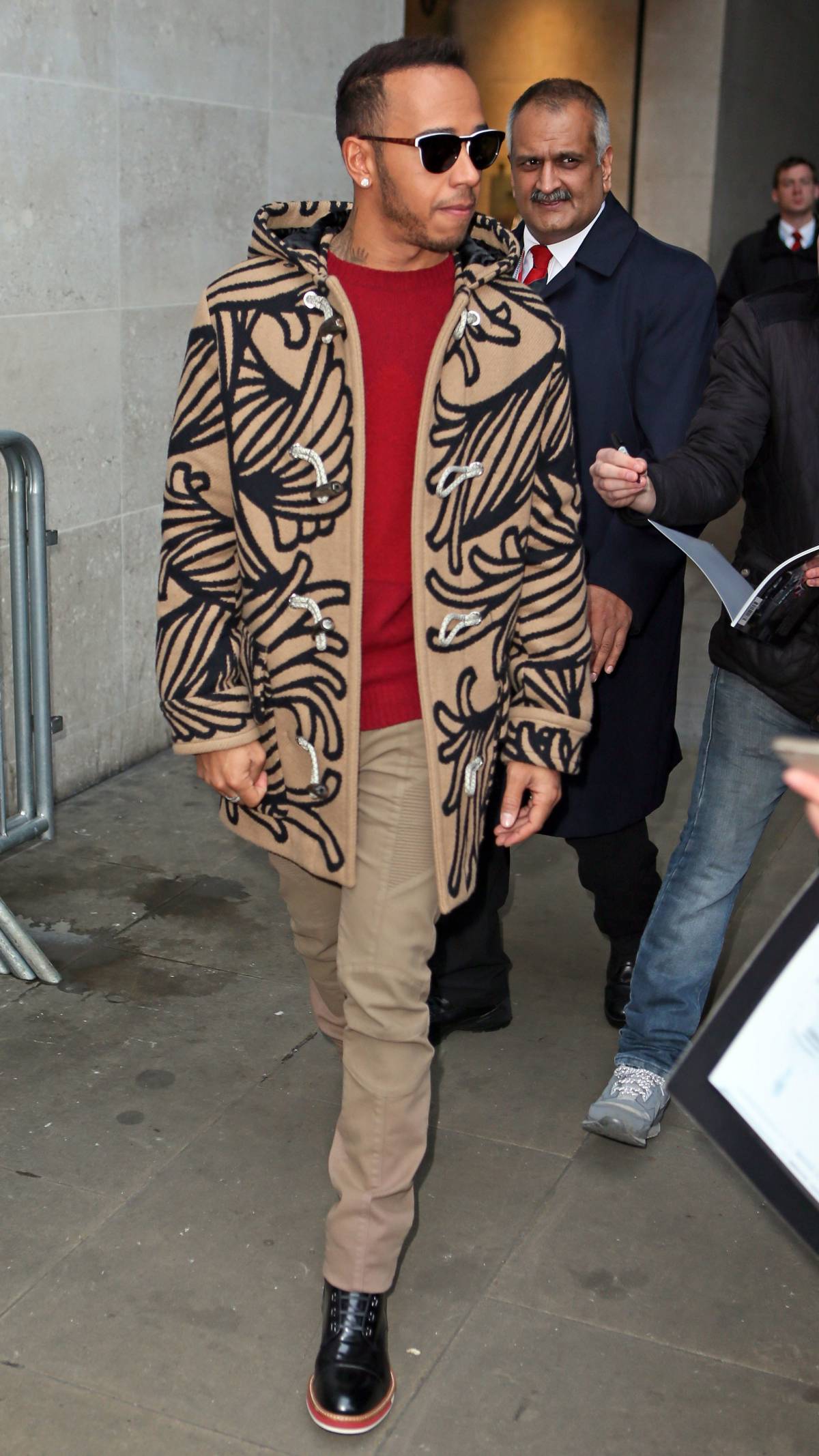 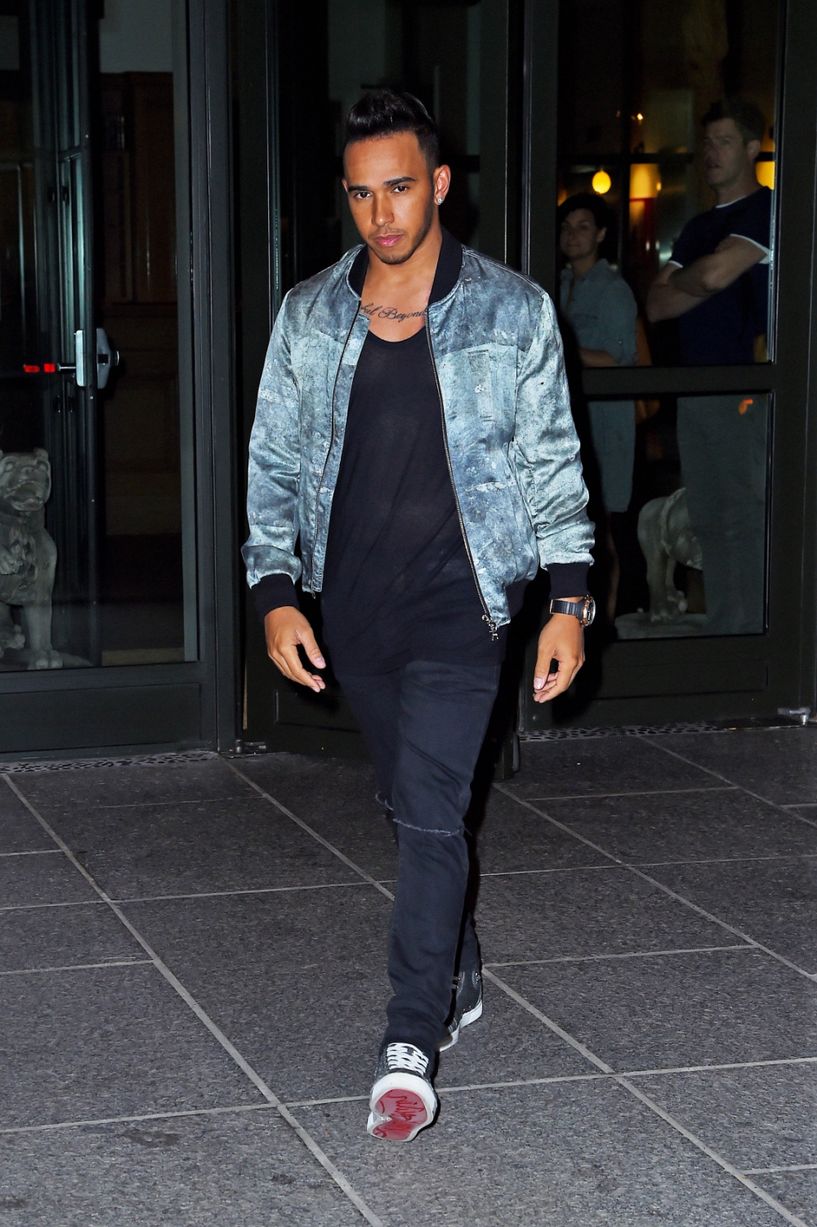 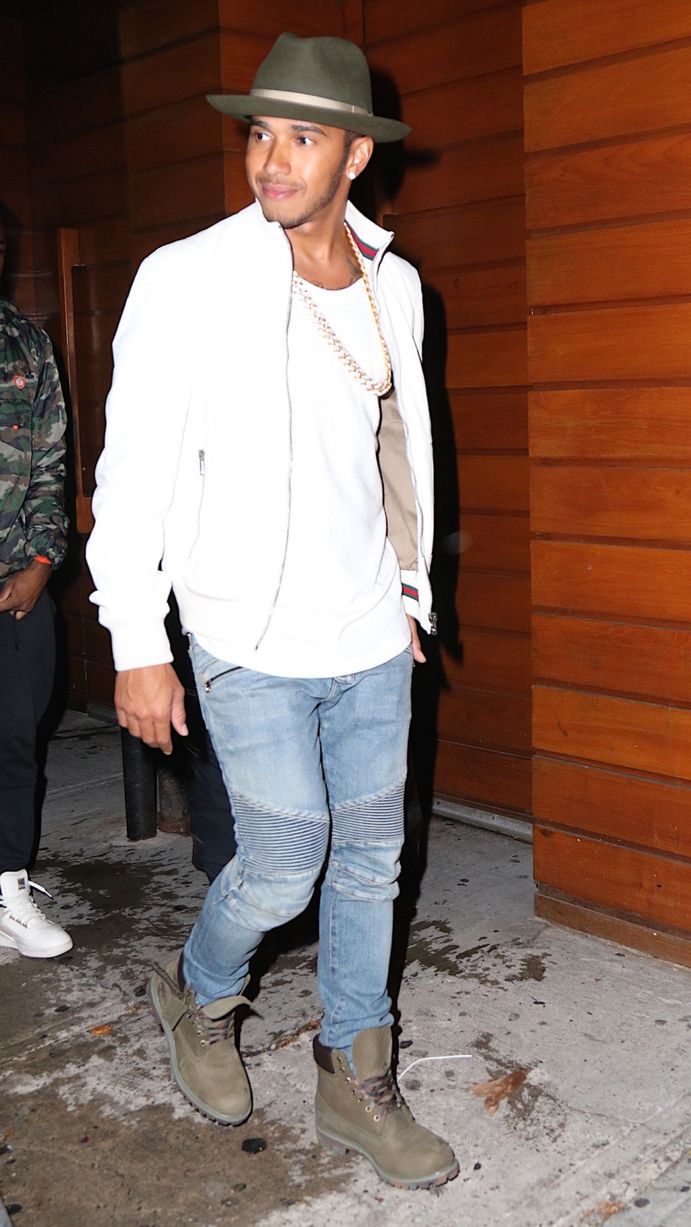 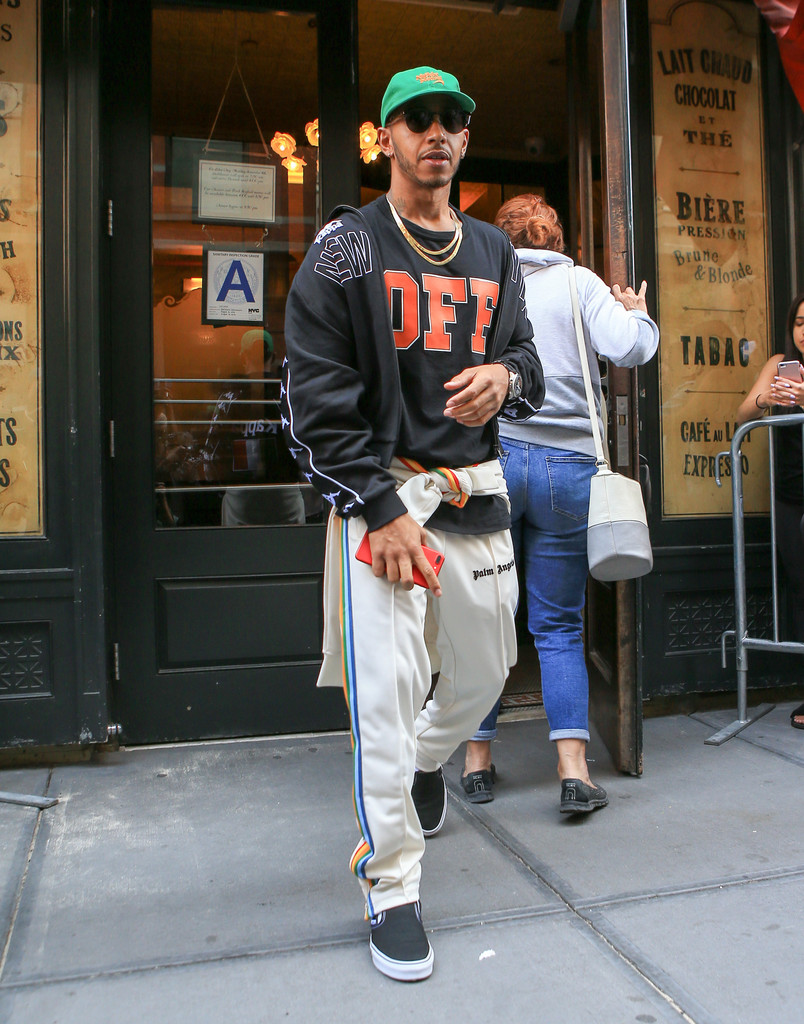 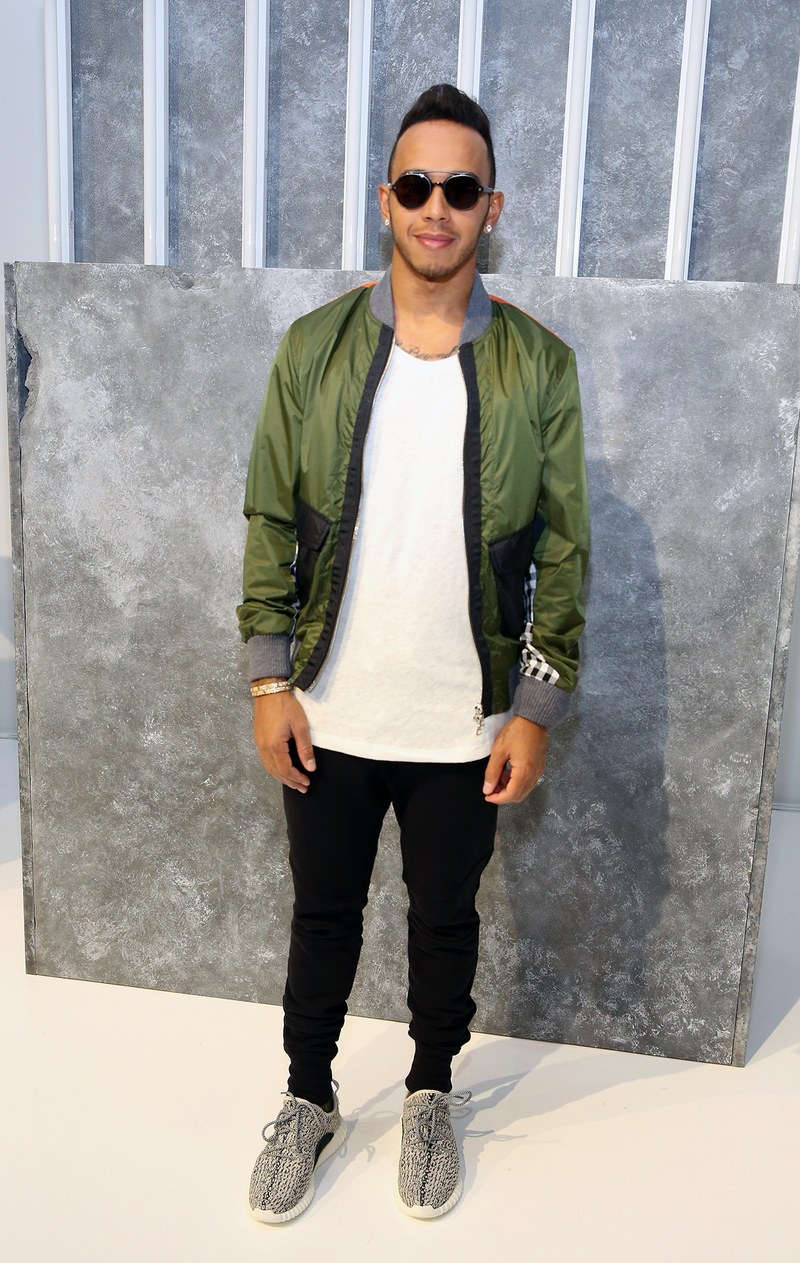 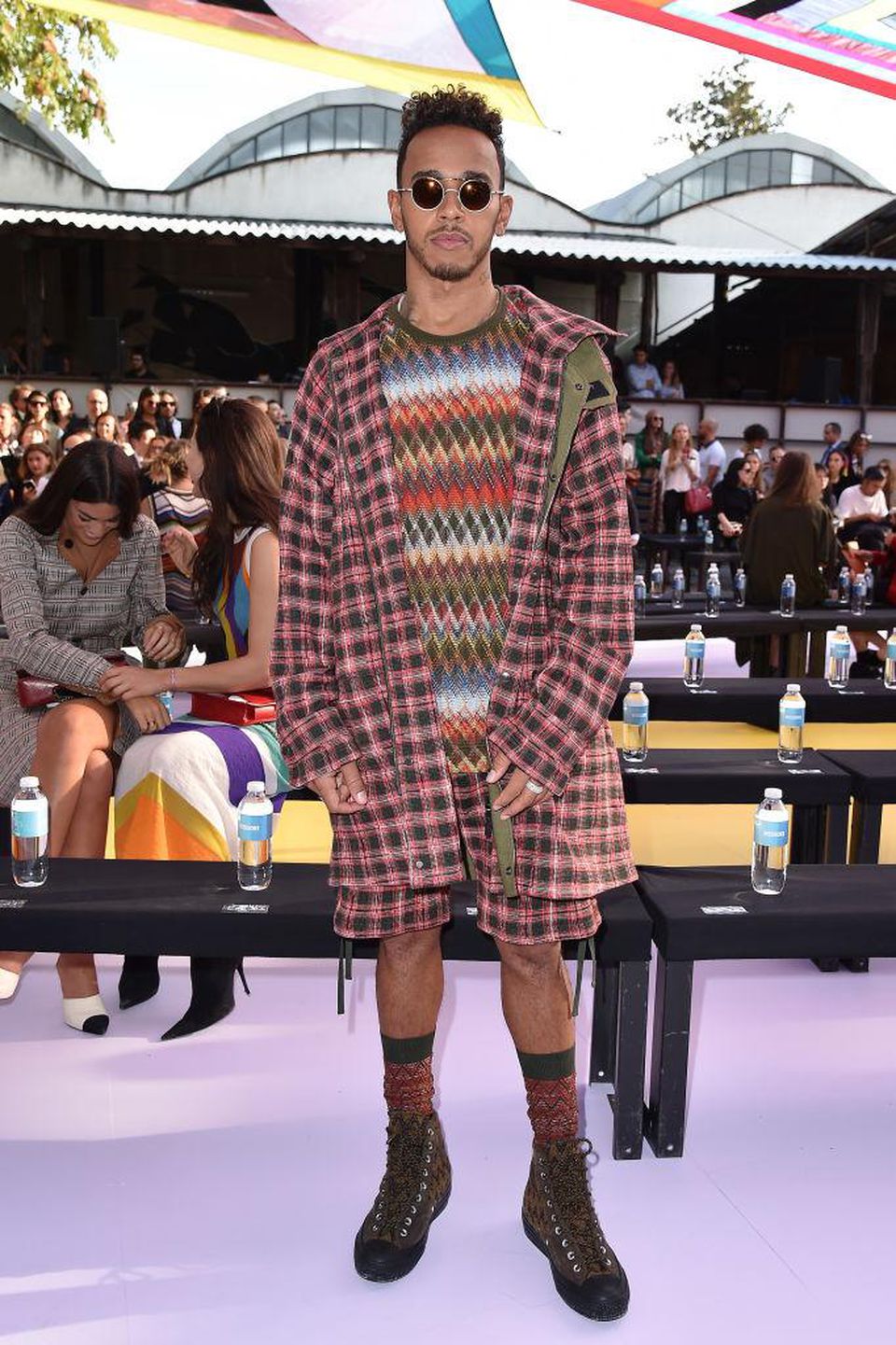 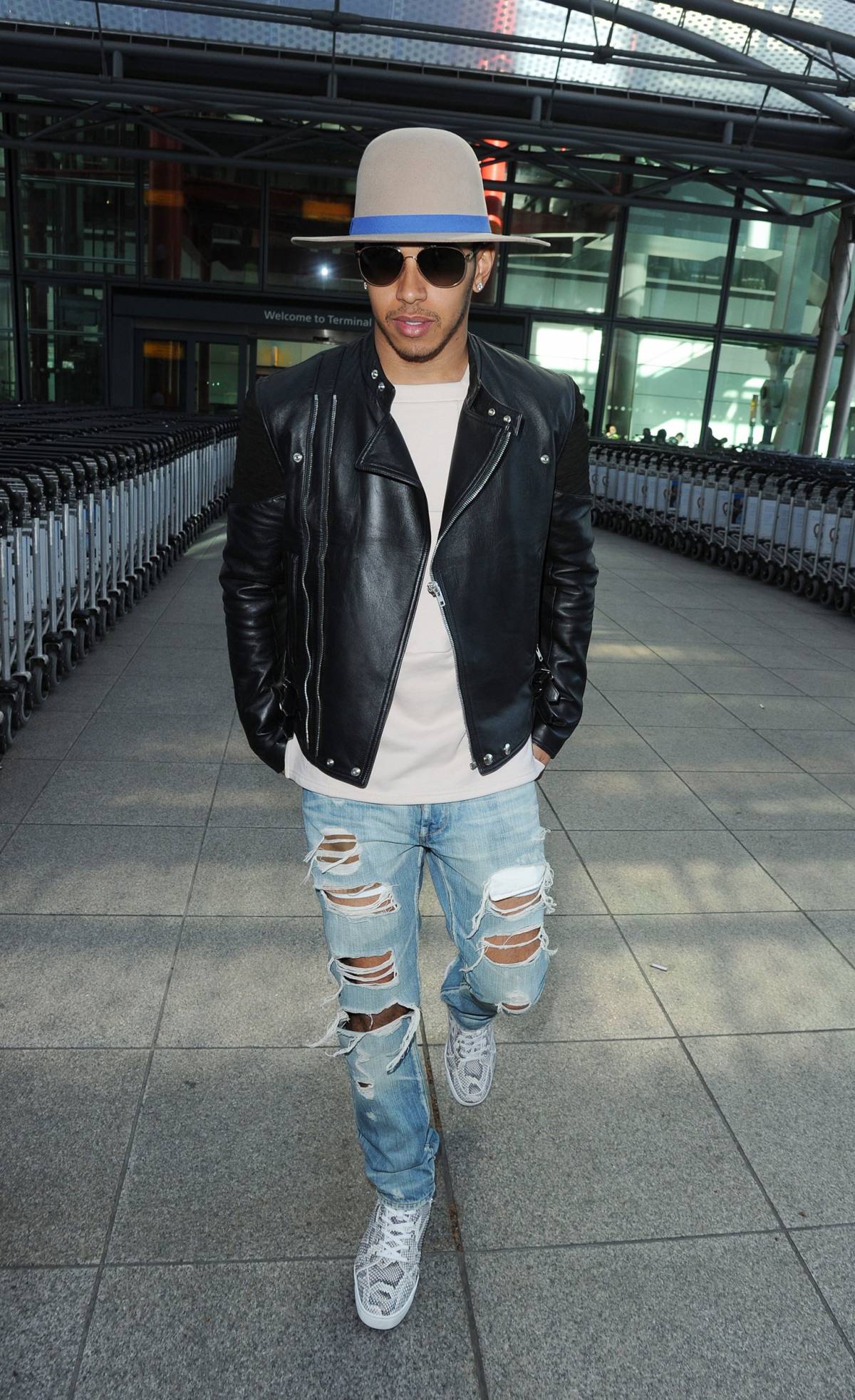 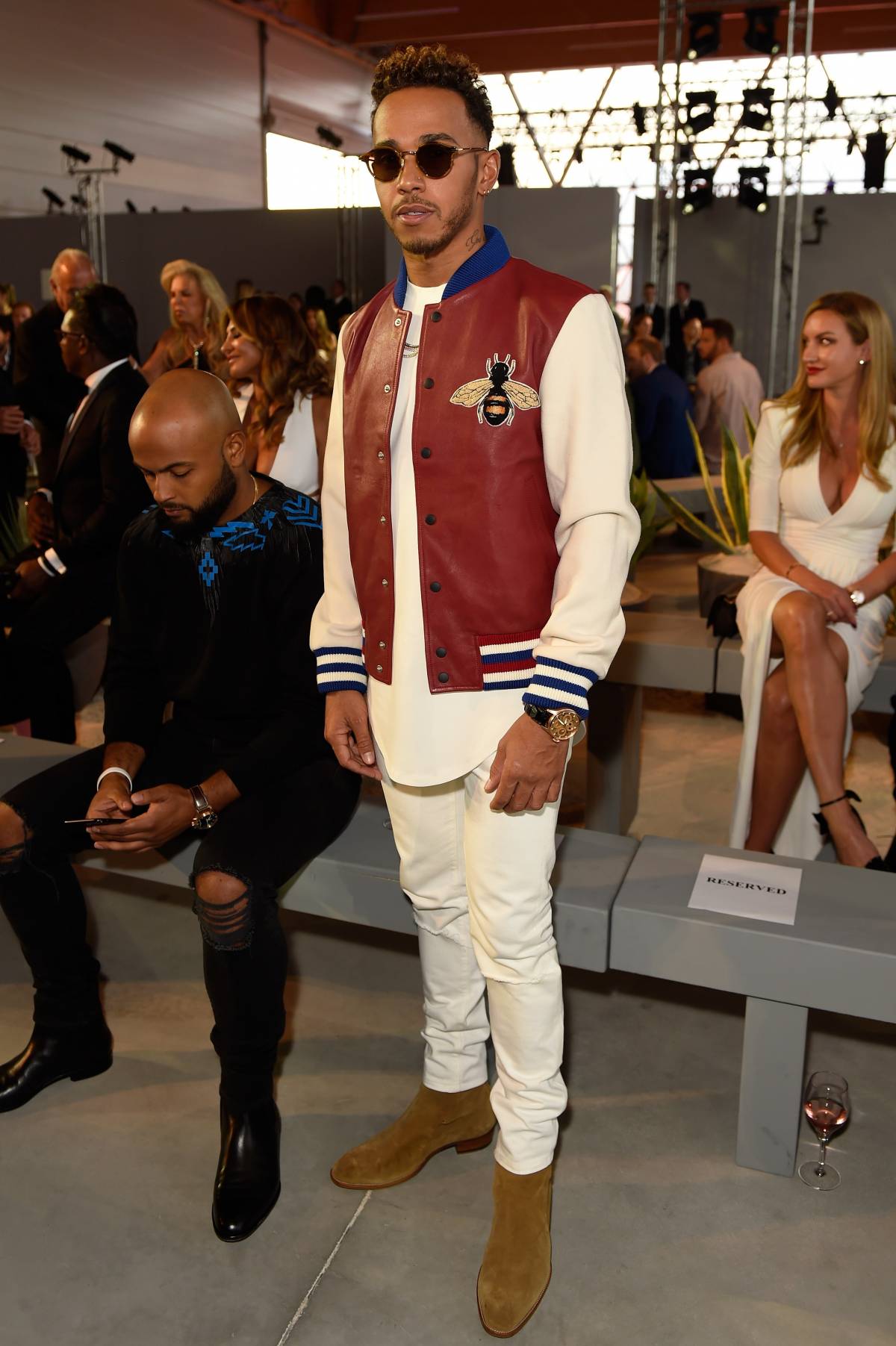 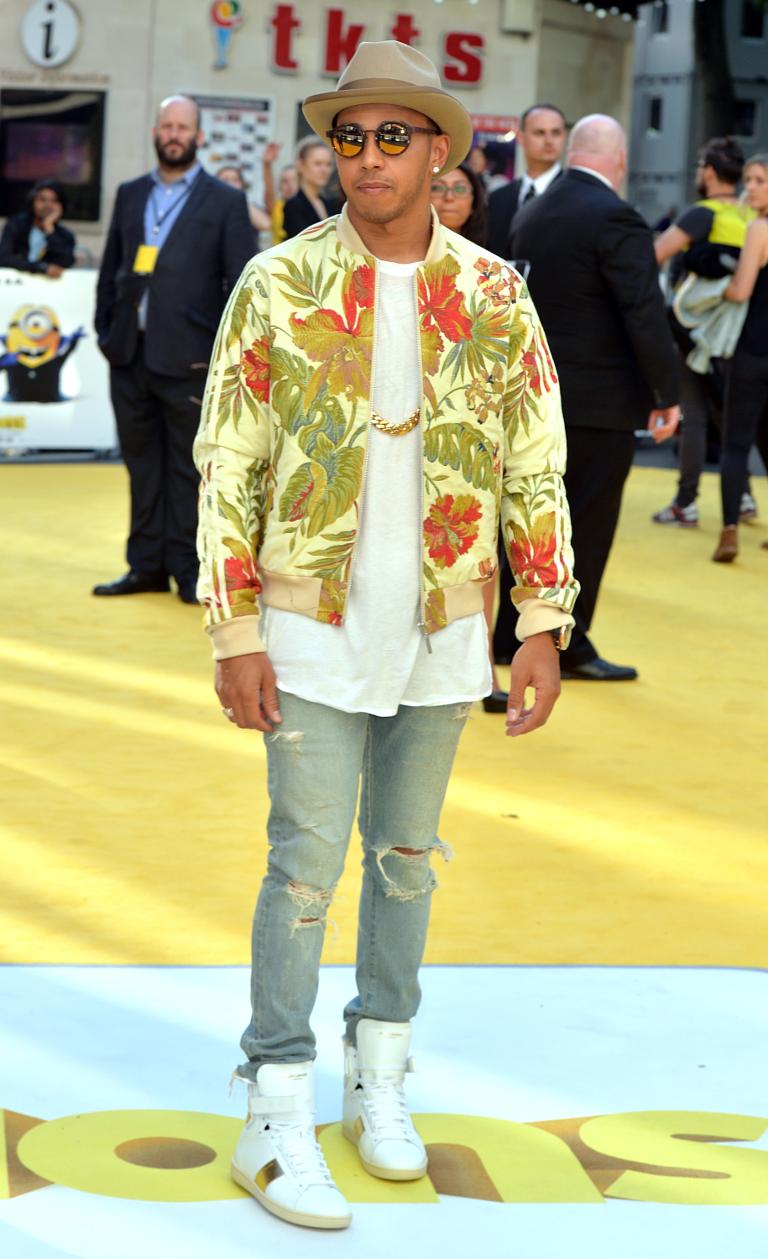 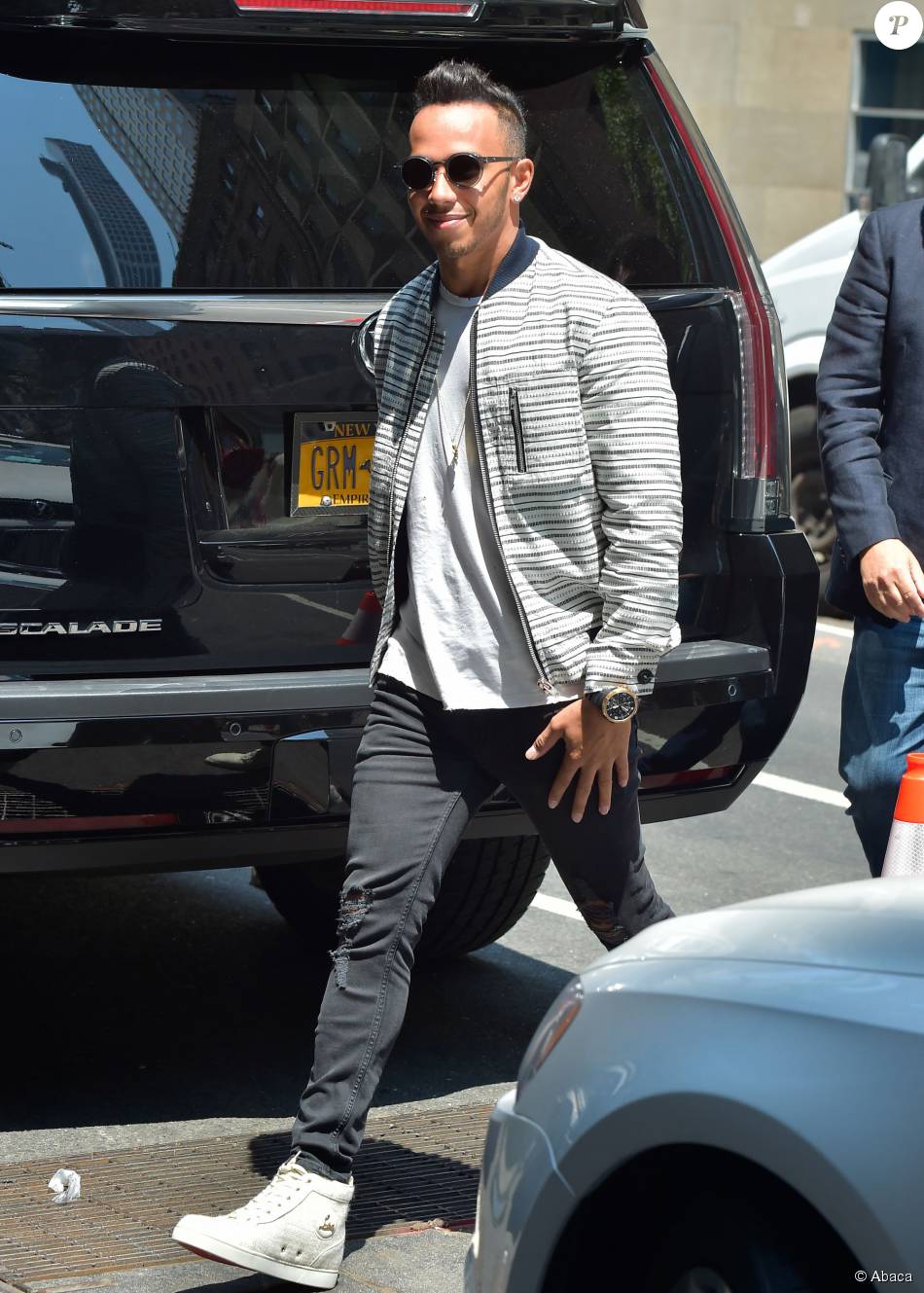 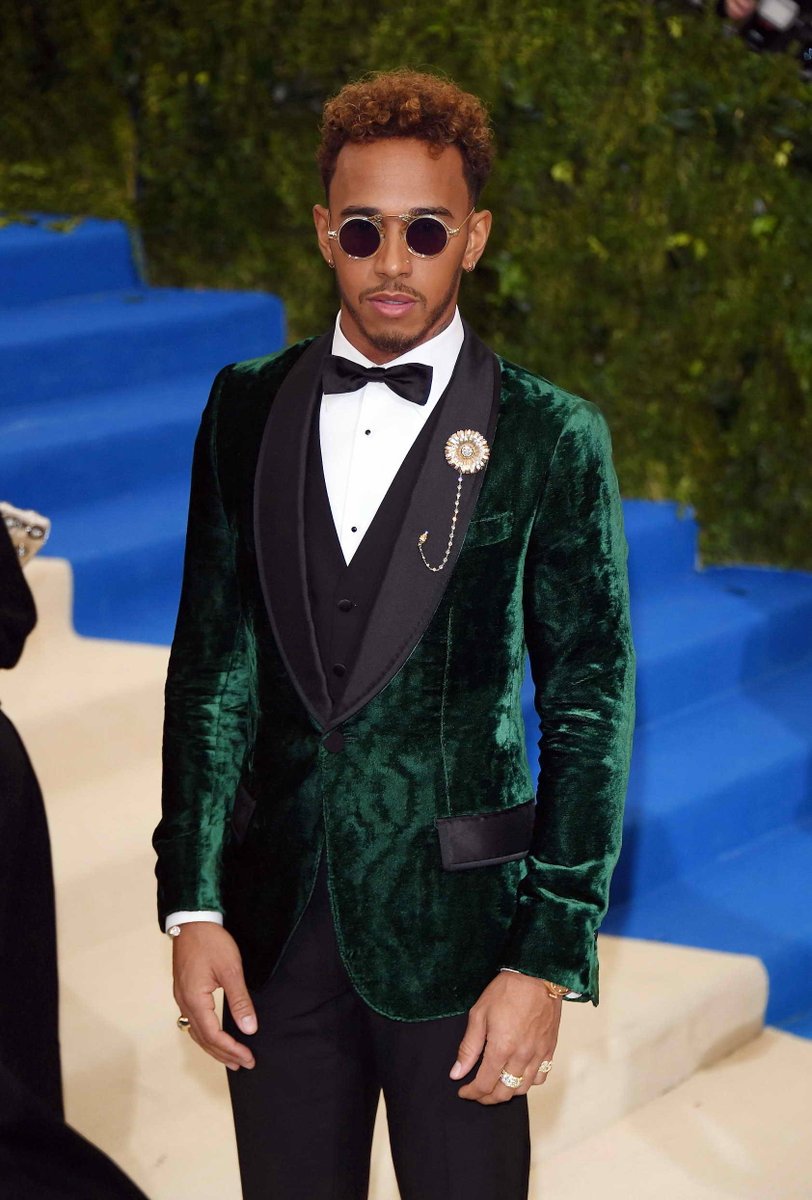 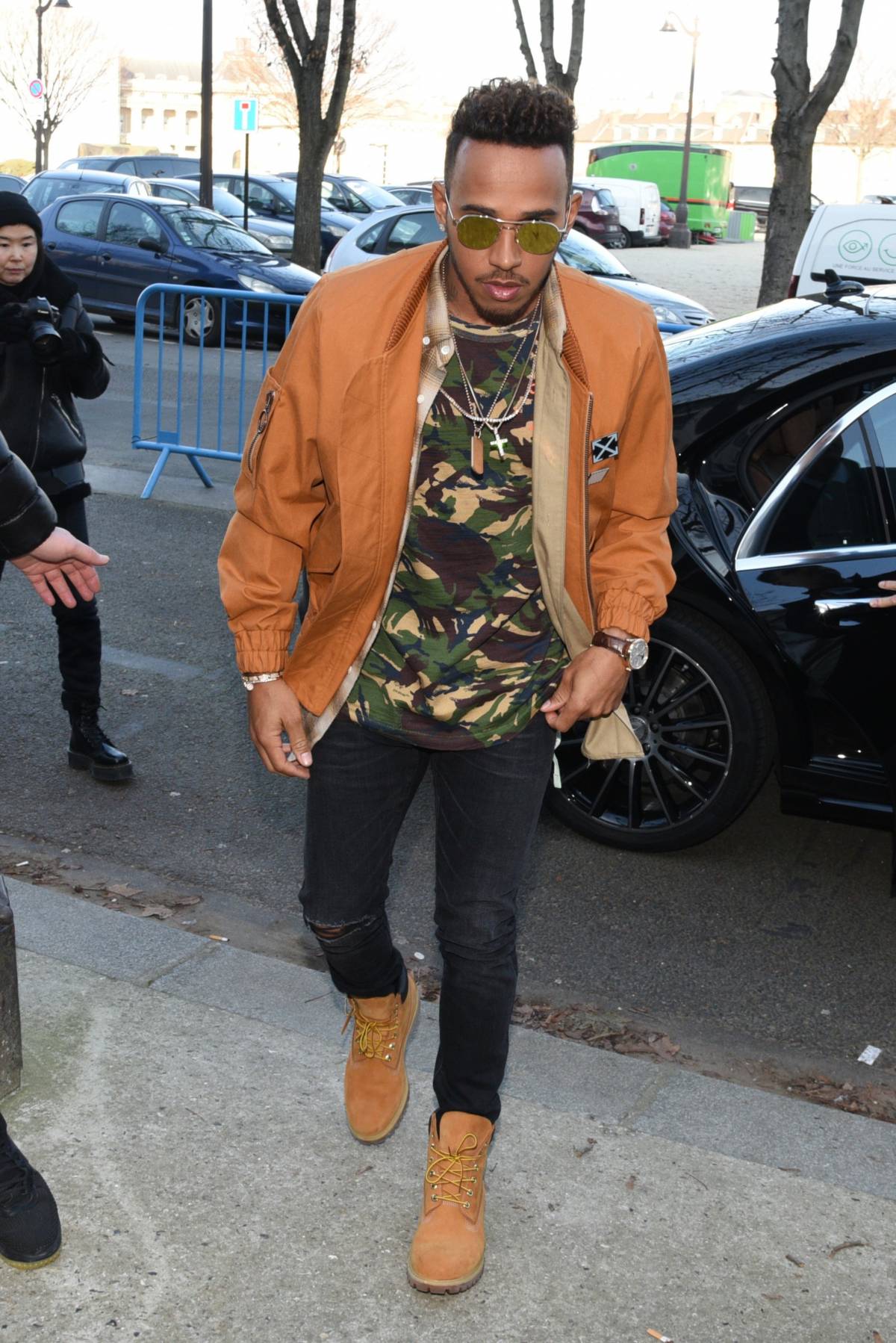 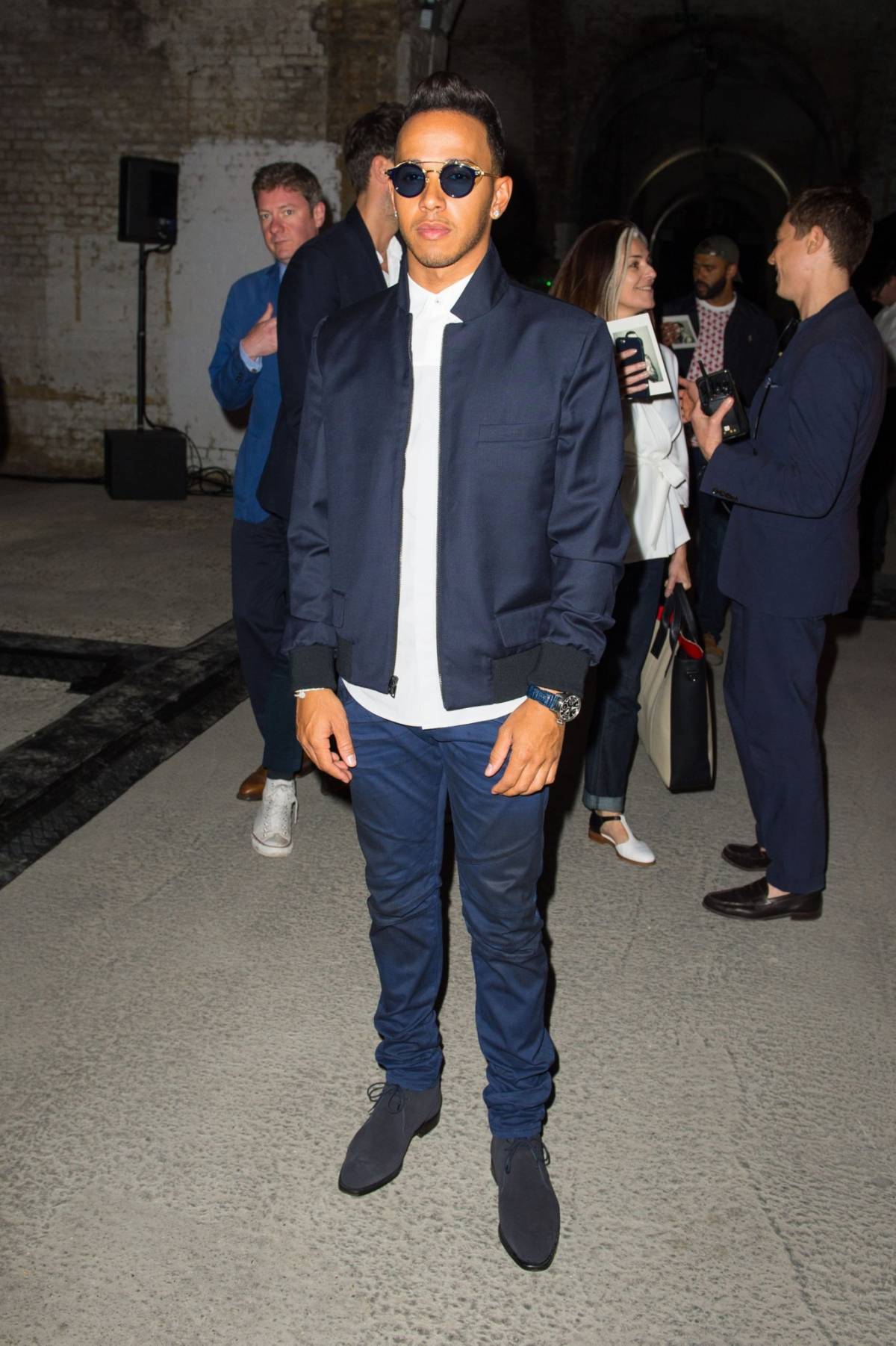 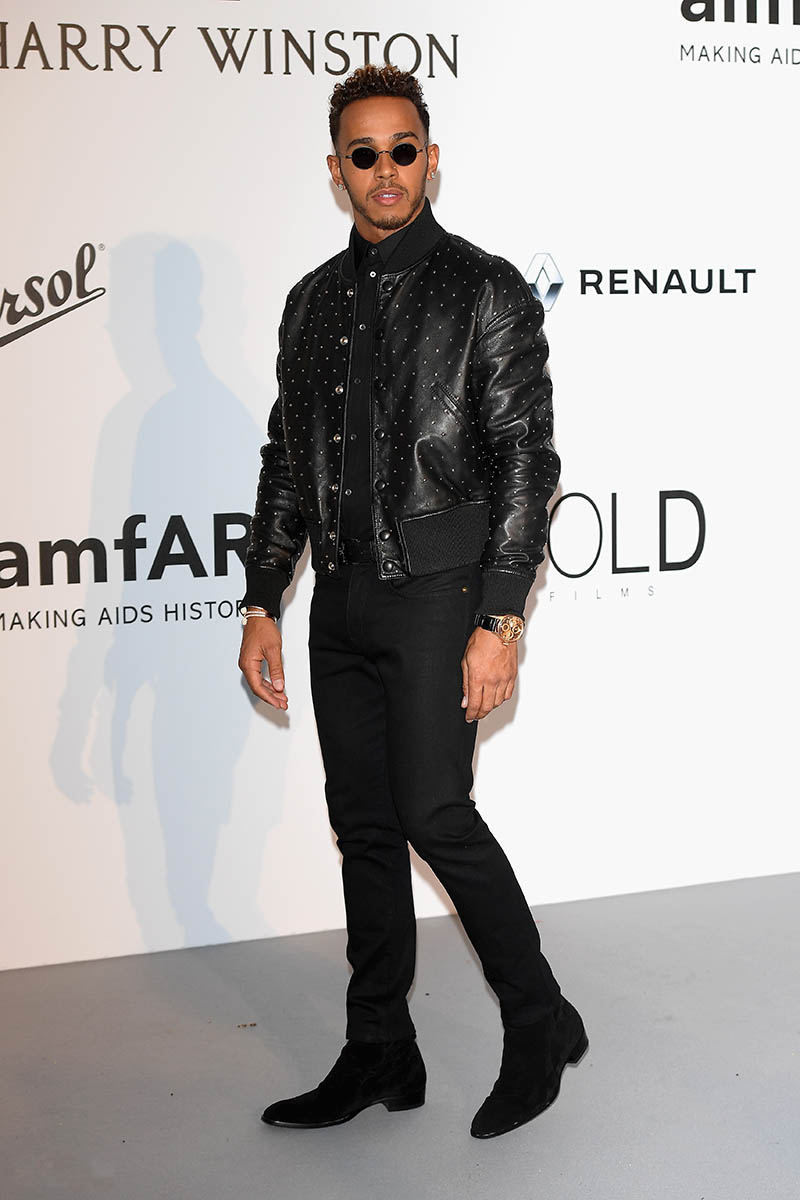 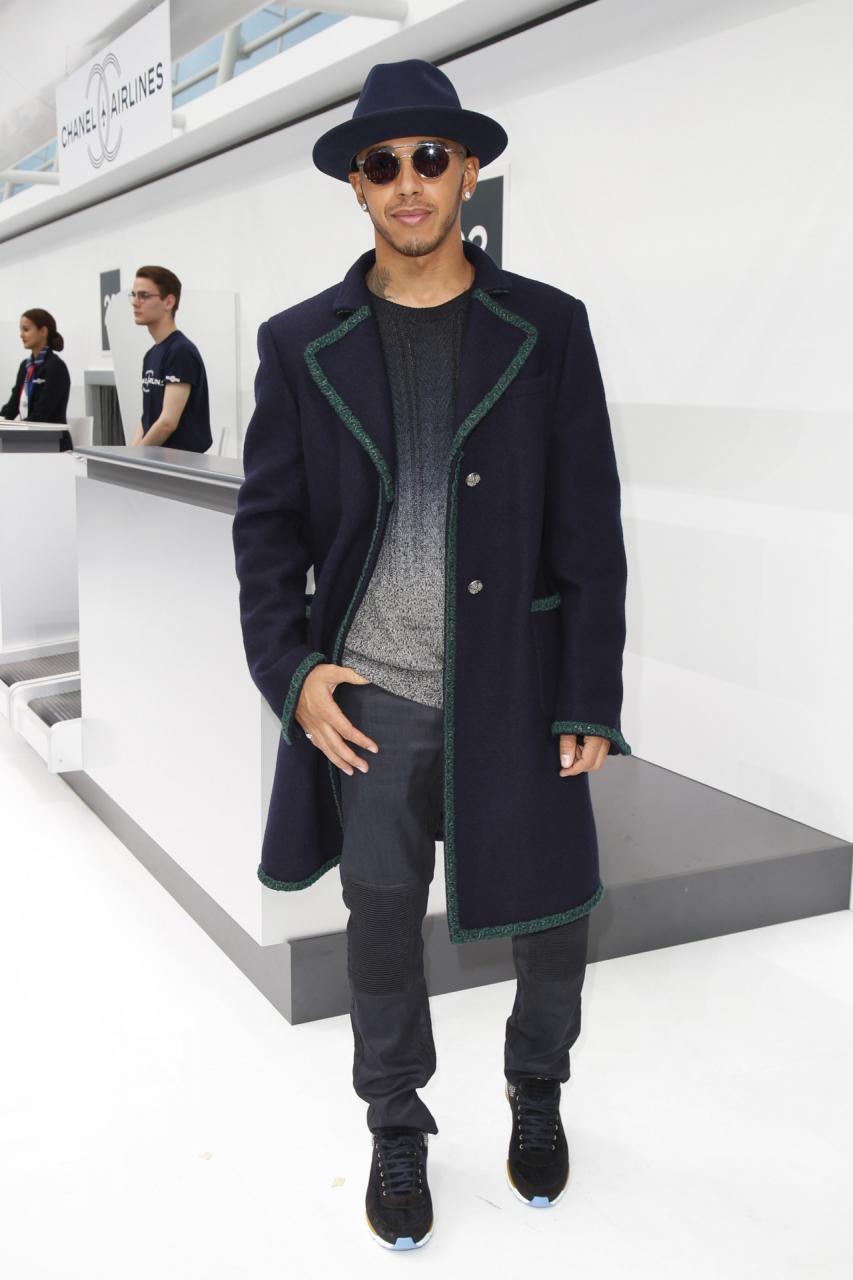 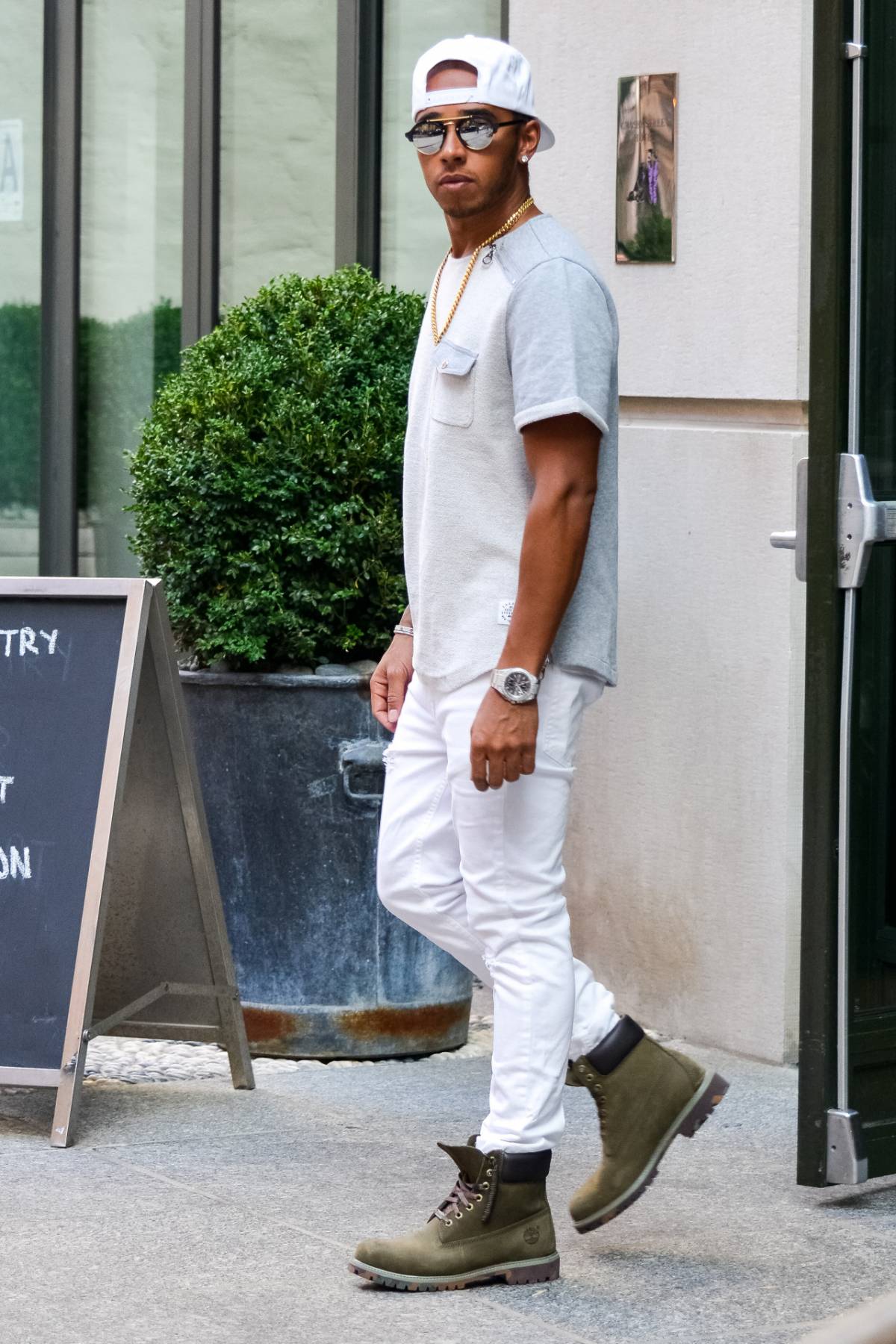 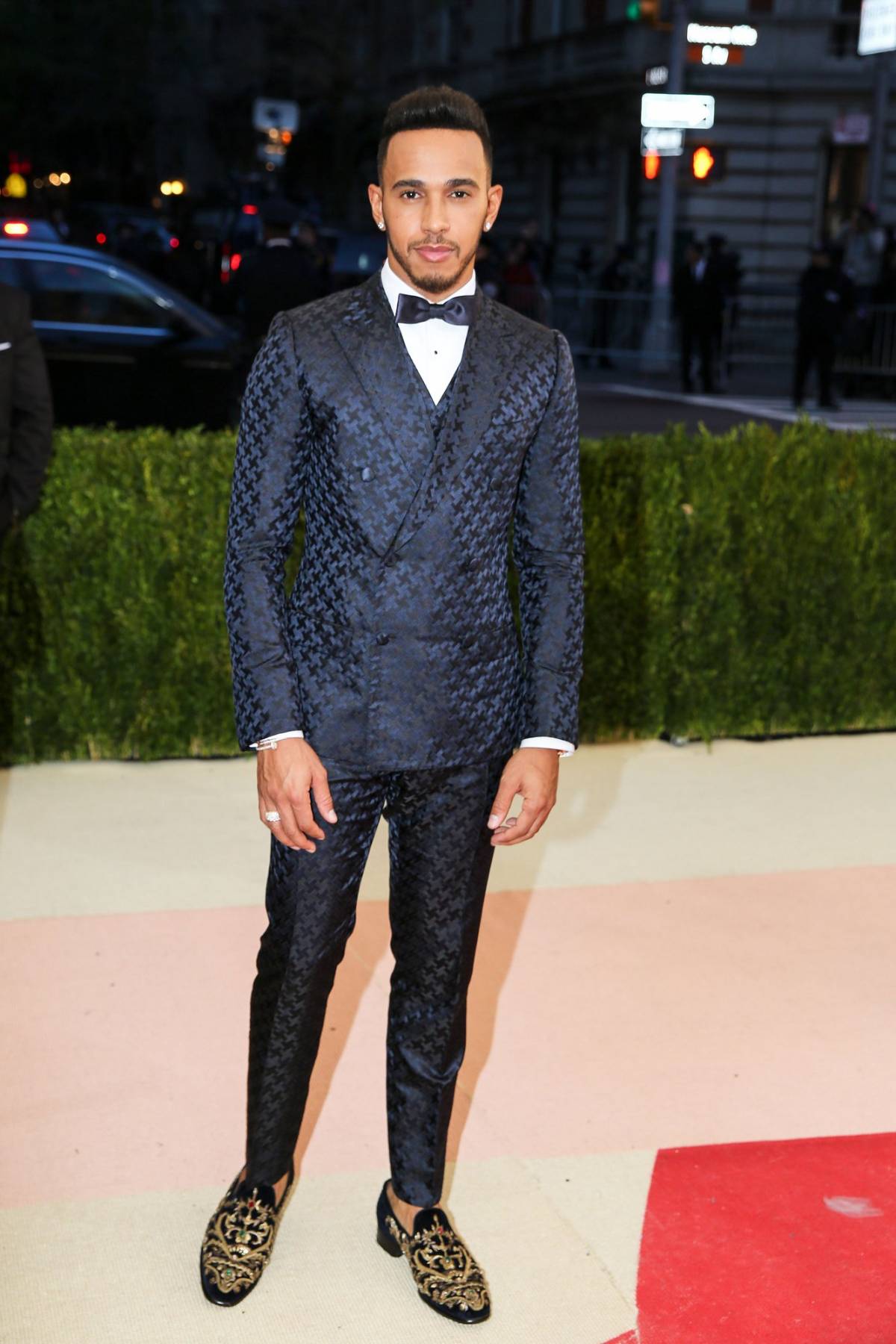 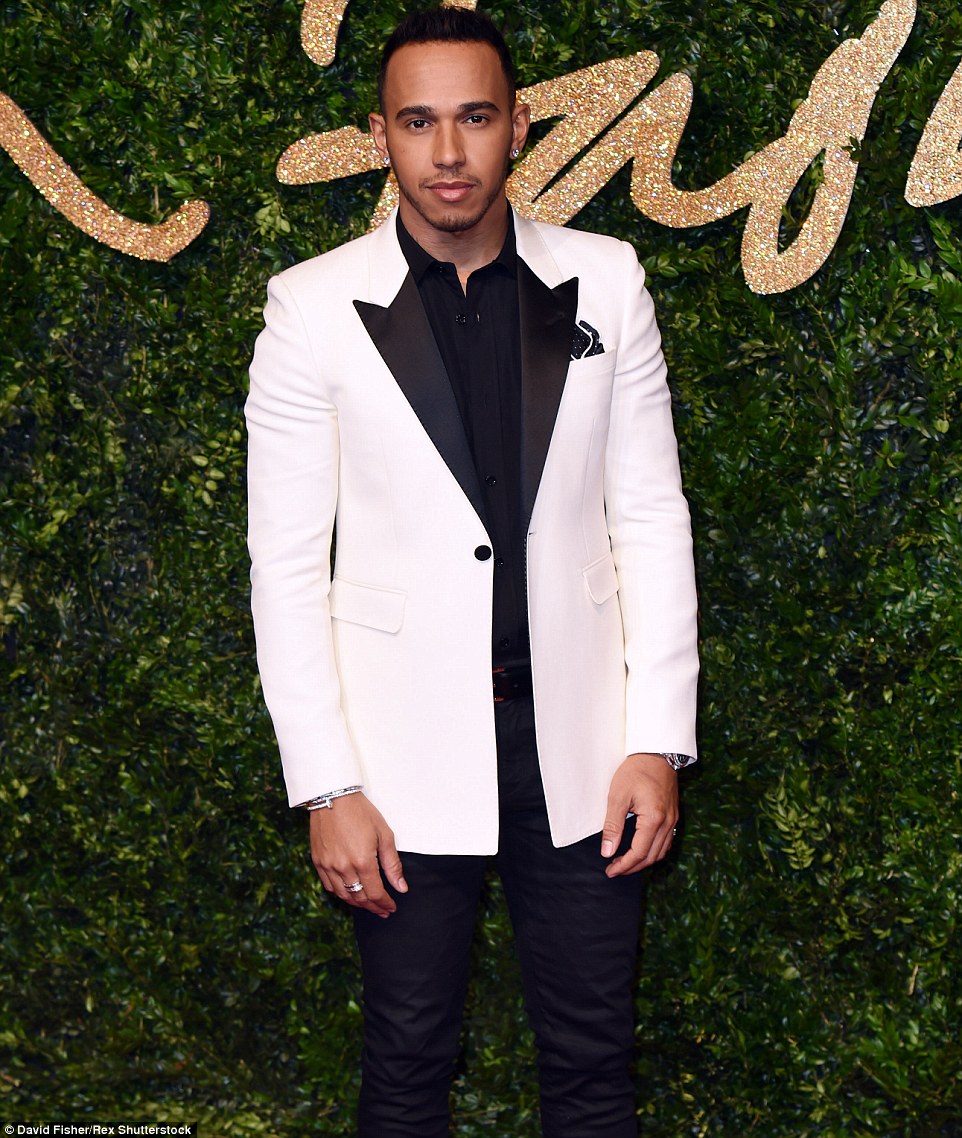