Yes: Paris is the city of love. But it also has a seedy underbelly. And after plumbing the wine-soaked depths of Booking.com—reading the (hilarious) horrific experiences that have befallen unwitting tourists there—the usually airy-fairy saying, “There’s no yin without yang”, has been put into sharp relief.

Now, of course there’s going to be the occasional cheapskate who expects Ritz-level treatment for 30 euros a night. Those kinds of tourists are easy to spot. Case in point: Saeed, (presumably) a Persian prince from Iran.

Saeed complained that his budget hotel in the heart of Paris, “Was too old and (the room was) too small for two people, the bed was uncomfortable and the toilet was old and too small,” concluding the place was not fit to stay in, “even for one hour”.

These reviews tend to be picked apart by locals, like Alex from France, who said, “Listen, this not the Ritz but a 2 star (1 actually) hotel in south Paris…. It’s a low cost hotel for overnight or a few days so you can attend to your business meetings or just visit Paris. Period.”

However: it’s not these reviews we are interested in. From makeshift brothels to (almost) outdoor dunnies you have to pay (even in the middle of the night) to use, the reviews you’re about to read paint a picture of Paris that would make the Mona Lisa cry. 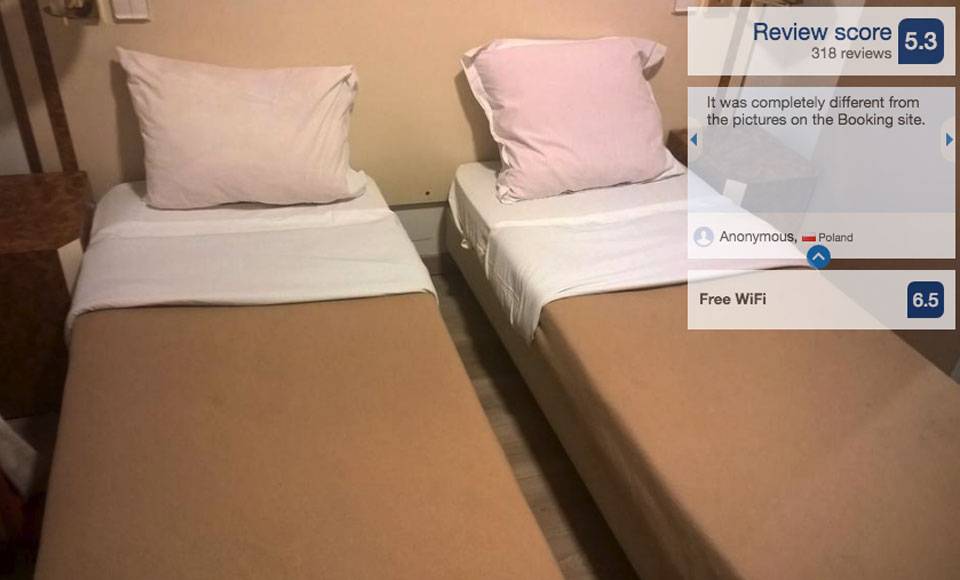 Alexander from Greece, our first victim, had this to say:

“The worst hotel I have ever visited in my hall life!!! DIRTY DIRTY DIRTY!!! Uncomfortable mattress if there was a mattress under the dirty sheets… There was even a gum stuck on the blanket!!! Stinky hotel, stinky room!!!! I sprayed everywhere with my perfume in order to cover the smell!! If I had time I would have called to the tourist police, but I didn’t!!!”

Although he stayed at the same hotel, ‘Anonymous’ from Iran was more upbeat. Negatives: “Bad smell, cold, not clean.” Positives: “Money.”

Elizaveta from Russia, however, got more (or less?) than she bargained for from the city of romance.

“The hotel room was very unclean—layers of dust on the floor and on the ceiling; no sound isolation at all—the evenings were a nightmare—living on the 6th floor you could hear people snoring on the 1st floor; the blankets had holes from cigarettes; hot water starts running after 5 minutes; a tiny litter bin in the bathroom is emptied once every 3 days.”

Marius from the UK had only this to say, “Regretful,” before suggesting:

“My guess is some opportunistic ppl took over the hotel and did no investments in it in the past 20 years.”

One outlier, Sebi from Romania, didn’t mind it, saying, “If the price is low, it is ok.” Unfortunately he seemed to be the only satisfied customer, with Arun from the Netherlands calling it a last resort.

“May be a good place if you have no other option.”

Nicholas from the UK stayed in an even dodgier location. In fact, the stains on the floor, curtains and skirting boards were the least of his worries. “The location of the hotel is in an extremely rough area, police were arresting people daily, and I (6ft 2in man) didn’t feel safe at night.”

“The hotel was also being used as a makeshift brothel with people checking in at 3am for sex, which you could hear through the extremely thin walls of the room, then noisily checking out at 5am… I know Paris is the ‘city of love’ but this just takes the biscuit.”

Oh and, “The sign on the door says phone reception in case of fire or emergency, but there isn’t even a phone in the room.” Awkward. 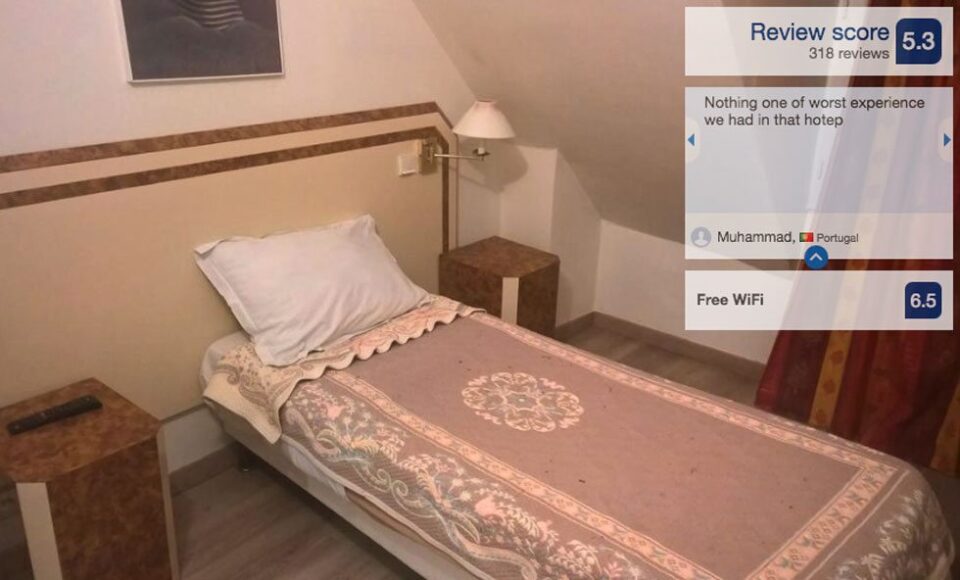 NomadTranslator from Canada began their review somewhat cryptically: “Pay for a shower in Rue Daguerre”. What does that mean? Well, the rooms came with a sink only, and a shared bathroom and toilets.

“Was told had to ask for the key to the bathroom downstairs and pay 4 EUR to have access to the shower. Could not see myself having to dress first to go downstairs to the reception to get a key nor to PAY extra money to take a shower. Also no soap provided in the room nor face cloth.”

At least that explains the, “Bedsheet with a large remnant of a brown stain.”

So if you’re heading to Paris this July: maybe hit up Airbnb.