Influencers Are Provoking Environmentalists By Posing In Dangerous Locations

“If this inspires people to camp on cliffs, I hope they enjoy the midnight piss.”

Back in the days of Nokia cell phones and Sat Nav GPS, people went camping to disconnect. To explore. To discover. These days it seems like people have one aim: get the perfect Insta shot. You know the kind, feet dangling over a precipitous edge, thermos flask jauntily placed to one side, golden hour of sunlight providing the perfect backdrop of warm light.

Don’t lie: you’ve either taken one, or seen one. Me? I used to scoff at such navel gazing. However, fast forward three years and I’m now one of the most prolific, “I woke up like this” posers out there. Hence my interest in the latest development in the (travel) world of Instagram: the account, “You Did Not Sleep There.”

The official @youdidnotsleepthere instagram account has one mission: to expose the frauds among us. And while pedantic commentators and defensive travel bloggers may claim they actually slept, if briefly, in some of these locations, our money is on most of their shut-eye taking place in a 5 star hotel twenty minutes inland from each edge in question. But don’t take our word for it: check the images out and make up your own mind.

Our first sample takes place at a famous overhang in Norway called Trolltunga, notorious for the hundred of snaps a day that backpackers take there. This means that, contrary to what you might expect, the primary reason not to sleep here isn’t the imminent risk of death, it’s the certain risk of being woken up by hordes of tourists impatient to get a shot. 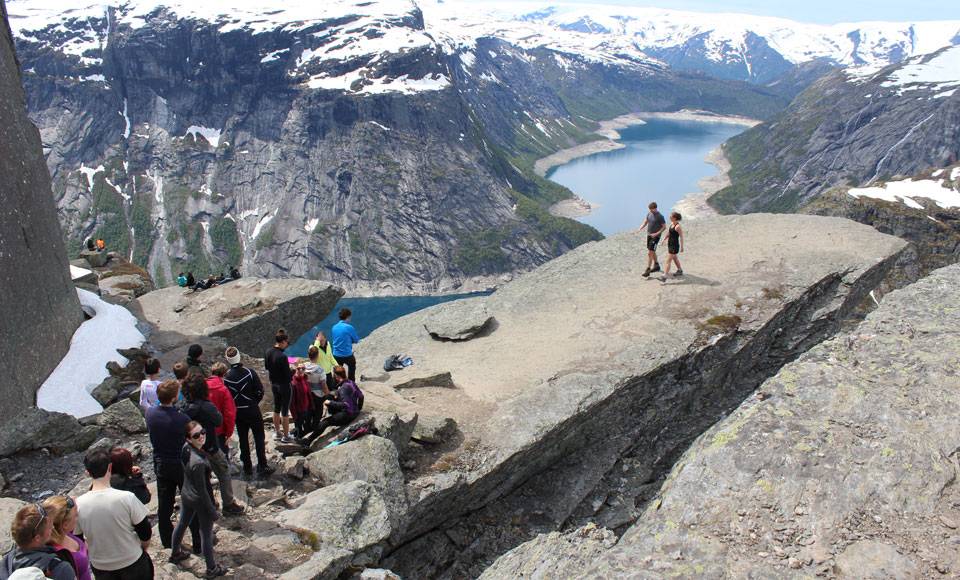 “There’s no easy way to get to this rock… Yet somehow, we’re all here.”

The second example takes place on a vertiginous rock platform in Utah, by a couple on a truck cabin road trip. Sara Underwood, the tent owner pictured claims, “We love sleeping in the truck cabin, but some camping spots are way too good to pass up.” Commentators said, “They have a crazy camper now so they don’t need these kinds of tent spots,” as well as, “She didn’t even set up the tent,” and, “Faking a heel hook just to get a crotch shot is so good.” But what do you reckon? Do they have a point, or are they just, as one commentator who came to Sara’s defence suggested, “Trolls (who) are just jealous you’re living the life they’re dreaming about?”

Some days I feel like people are starting to get their shit together. Other days….this. #youdidnotsleepthere • photo @saraunderwood but actually @jacobwitzling

The next was taken in Durdle Door, Dorset, a beach on England’s Jurassic Coast, named after an impressive, natural limestone arch. What is less impressive, however, is this candidate’s assumptions regarding his or her followers’ intelligence. First consideration: tide. Second consideration: hefty fines for camping on the beach. Third: waste elimination. If the caves in the cliffs of Beliche, in Portugal’s algarve (where most Jurassic coast #vanlife hashtaggers end up) are anything to go by, the picturesque location is actually not an attractive place to camp due to the abundance of turds and toilet paper at their base of the cliffs.

Our next contestant is as confident as Tony Abbot that global warming is a hoax. Although some believe they really did sleep these, as it’s, “One of the only flat spots on the way to the summit,” others weren’t so convinced, “I think the sunny right wall of the tent proves that it spent more time on a computer’s clipboard than it ever did on this ridge!” We’ll leave it to you.

The next one however, is a little easier to dismiss. One stray roll and you’re screwed, mate.

The next one is perhaps the most believable of the bunch. Surely there’s nothing dangerous about camping on a disused railway, so long as you’re sure it’s disused. But then again… Why!

When your campsite comes with an entourage. #youdidnotsleepthere • photo @_vanisland_

The following snap-happy campers are either brave souls or frauds. Their love for waterfalls only matched by their confidence in their ability to not roll over while sleeping. Check it out.

These guys either have a similar passion for erosion or a death-wish… Or unwavering confidence in the functionality of their hand-brake.

The last of this series is the most inventive of the lot, featuring a series of bungee cords, which suspend @garrisonrowland‘s tent above a fairly fast-flowing river. Although it seems far fetched that he slept there, that he actually set this contraption up is quite possible, as he is quite a handy slack line artist.

It’s cool, if you miss the swing in you’ll just land in the river. #itssafe #youdidnotsleepthere • photo @garrison_rowland

RELATED: The 7 Most Illegal Places To Travel In The World