How To Master The Art Of Sexting, Without Embarrassing Yourself

“If you’re vigilant about encryption and wiping EXIF data, and your partner likes to post risqué images to Reddit and accidentally downloads malware every week, you may have a conflict on your hands…”

To ensure you always engage in safe sexting and keep your privates private, keep the following advice in mind.

According to science, sexting isn’t just common – it’s beneficial. Researchers at Drexel University enlisted 870 heterosexual adults between the ages of 18 and 82 for a study on the subject. The survey revealed that 88% of respondents had sexted at least once, and 82% had done so in the last year. A full 96% said they were pro-sexting, whether or not they’d tried it themselves. Participants who did get their sext on reported higher levels of sexual satisfaction than those who refrained.

But if you prefer not to let science dictate your sex life, there are other points in the pro-sexting column. It’s fun, it’s hot, it’s exciting, it’s a low-stress crash course in talking dirty. It’s a tool in your foreplay toolbox. It spices up a relationship. It’s a bonding experience. It makes both people feel desirable. It helps long distance partners feel close and stay hot for each other. And most importantly, it’s normal – don’t let critics tell you otherwise.

Our ultra-connected digital age requires savvy sexters to exercise caution. From the 2014 iCloud leak dubbed ‘The Fappening’ to countless political scandals, we’ve seen first-hand the fallout that can accompany a raunchy photo habit.

Avoiding embarrassment starts long before you figure out your junk’s most flattering angles. Safe sexting begins with a solid foundation.

Remember just a minute ago when we said sexting is like actual sex? Here it is again: like IRL sex, sexting shouldn’t be done without consent. The hottie on Tinder doesn’t want to add your unsolicited package pic to the 25 she already received that day. It’s bad manners, and if she’s not the suffer-in-silence type, she’s going to show it to her friends as the latest in a long line of “Some creep sent me a photo of his dick today” stories.

When you know you’re sexting consensually, the next step is establishing trust. Have ‘The Talk’ with your partner. Not the one about when they last got tested or whether they’re still boning other people – the one about safe sexting best practices. Get on the same page about the security habits you intend to use. If you’re vigilant about encryption and wiping EXIF data, and your partner likes to post risqué images to Reddit and accidentally downloads malware every week, you may have a conflict on your hands. Agree on mutually high security standards before proceeding.

When you feel confident that your partner is trustworthy, have the same frank conversation you would have about sex. What are you into? Just text messages, or are pictures and videos on the menu, too? On a scale of flirty to dirty, how explicit do you want to get? Do you like the rush of sexting at work, or do you prefer to sext only from the safety of home? Voice any concerns and set ground rules that ensure neither of you feels uncomfortable or vulnerable.

And now for the question that’s been burning a hole in your brain: sexting with strangers – cool or nah?

Ultimately, the answer is up to you. We certainly won’t tell you not to do it, but we will say that it’s far riskier behaviour than sexting with someone you trust. If that’s a chance you’re willing to take, sext on, brave soul. 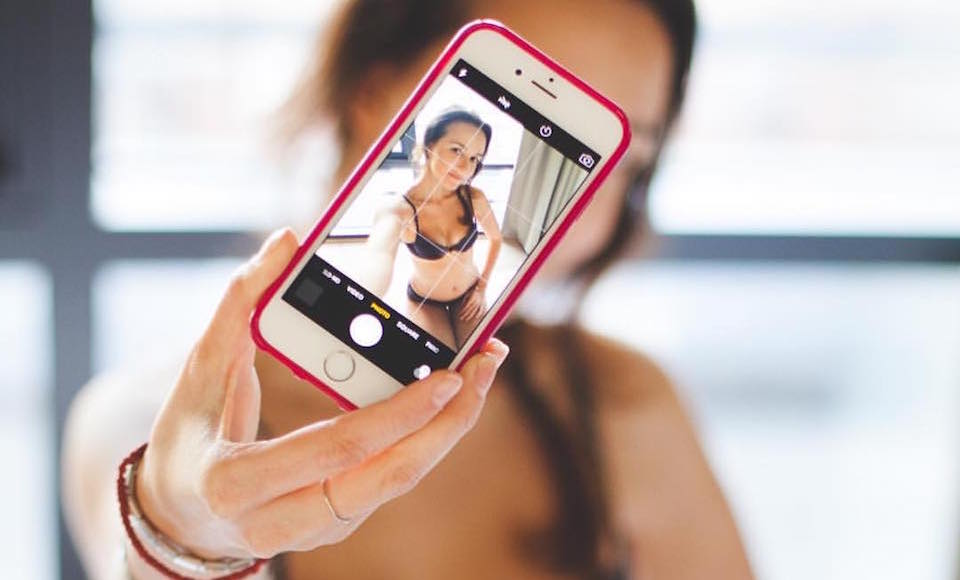 You’re almost ready to fire off your sexiest mirror selfies and Fifty Shades of Grey-worthy prose. Before you hit send, ask yourself these final questions.

And finally: Do I understand and accept the risks? The danger is part of the fun, but it’s still danger. You can never completely eliminate the risk of exposure when you sext. If the worst case scenario would have dire, traumatic consequences for you, you’re better off texting memes and pet pictures and saving the sexy stuff for face to face.

How To Do It

At last, the time has arrived. You’ve passed all the tests and set the stage for the smoothest, safest sexting possible. Here are eight final tips to make you a master of the sensual art of sexting. Who says romance peaked with Shakespeare?

Cameras automatically add metadata to images. This hidden info can reveal the time and date the picture was snapped, what camera was used, and even where it was taken – not good news when you’re aiming for stealth. A quick search online will teach you how to wipe out metadata depending on the device and operating system you use.

Delete all saucy images, both sent and received, and make sure they’re gone for good. You may have a Recently Deleted folder that collects items you thought you’d erased, or you may use a service that automatically syncs images between devices. In the latter case, deleting a picture from one device doesn’t mean it’s wiped from all of them. Also be sure you turn off any auto-upload or back up features you have enabled. If you absolutely must hold on to your photos, store them in a vault app that locks them behind a passcode and prevents hidden images from appearing in the primary gallery.

Use A Secure Service

An increasing number of services are dedicated to keeping your private communications private. Look for an app, like BitTorrent’s Bleep, that never sends messages to a server or the cloud. The most secure services abide by strict privacy policies, use https, and encrypt all messages and images. They may also block screenshots and offer timed messages that self-destruct.

Disable message previews from appearing on your phone’s lock screen. Even if you don’t sext, hiding messages from public view is a solid security tip.

Deleting individual text messages is tedious, particularly considering that they need to be wiped from both devices. A better bet is to use an app that allows you to disable chat history so that neither sender nor recipient has a record of the interactions.

Perhaps you have a service you like for smut and a different service for everything else. If so, keep doing what you’re doing. But if you want to conduct all communication in one place, clean and dirty alike, create a disposable account for the dirt that’s completely separate and contains no info leading back to you. Just remember which one you’re logged into before you hit send.

Be Prepared To Own It

The day may come when your sexts are exposed to the world. The best way to deal is to handle it like Bieber and Bloom – take it on the chin (or whichever body part you prefer), apologise if you need to, then give the world a big ol’ ¯\_(ツ)_/¯. Excuses are lame and embarrassment is overrated. Own it like the magnificent bastard you are.