16 Things We Loved & Loathed About The Porsche 718 Boxster GTS

There’s no shortage of fast cars to choose from in the Porsche hangar. Sure, the 911 is and always will be the German marque’s definitive halo car, but amongst that elite group also exists a much more conventional scalpel for taking you from point A to point B – quickly.

We got behind the wheel of the latest Porsche 718 Boxster GTS for a week to see how it handled Sydney traffic before taking on a day trip which saw some of the countryside’s tightest twisties and semi-damp conditions.

Not only did we live to tell the tale, but we also left with a dorky smile. Here’s why.

1. We can’t call it a ‘hairdresser’s car’ anymore. The current generation Boxster is sleeker, classier and more aggressive than ever… 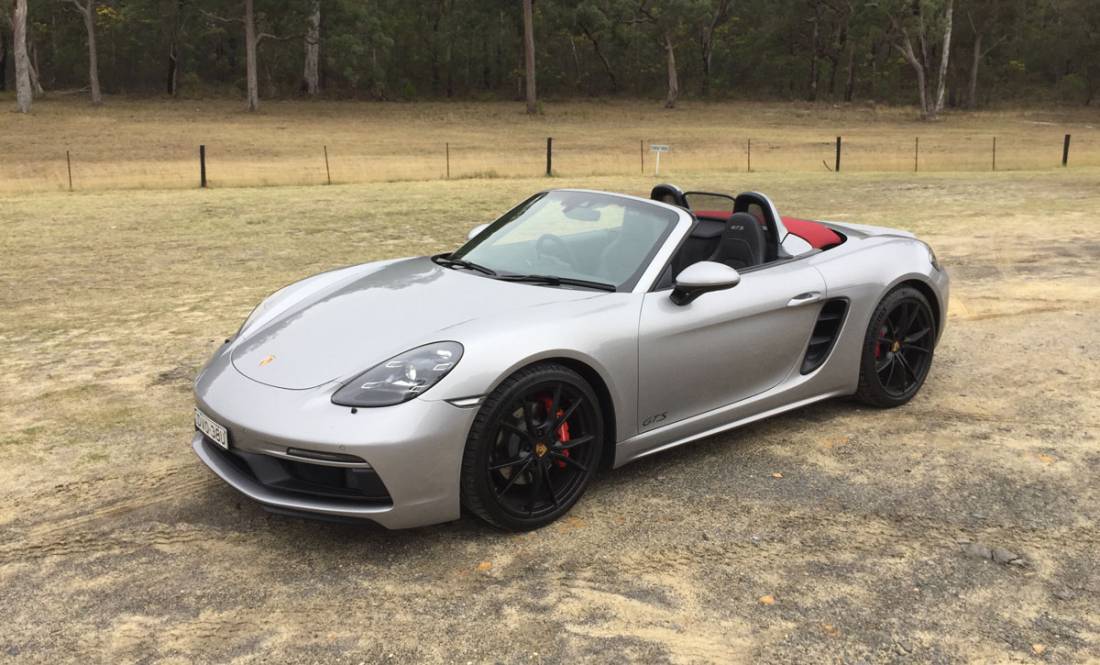 A look back at the older generation Boxsters will show you exactly how far this current model has come. Whilst the fundamental silhouette of a traditional drop top remains, the body lines are now much more defined, sharper and dare we say, masculine. This particular example we drove wore a GT metallic silver body paired to a red convertible roof. Subtle with a hint of sportiness.

2. Power isn’t everything…and that’s the Boxster’s ace up the sleeve. 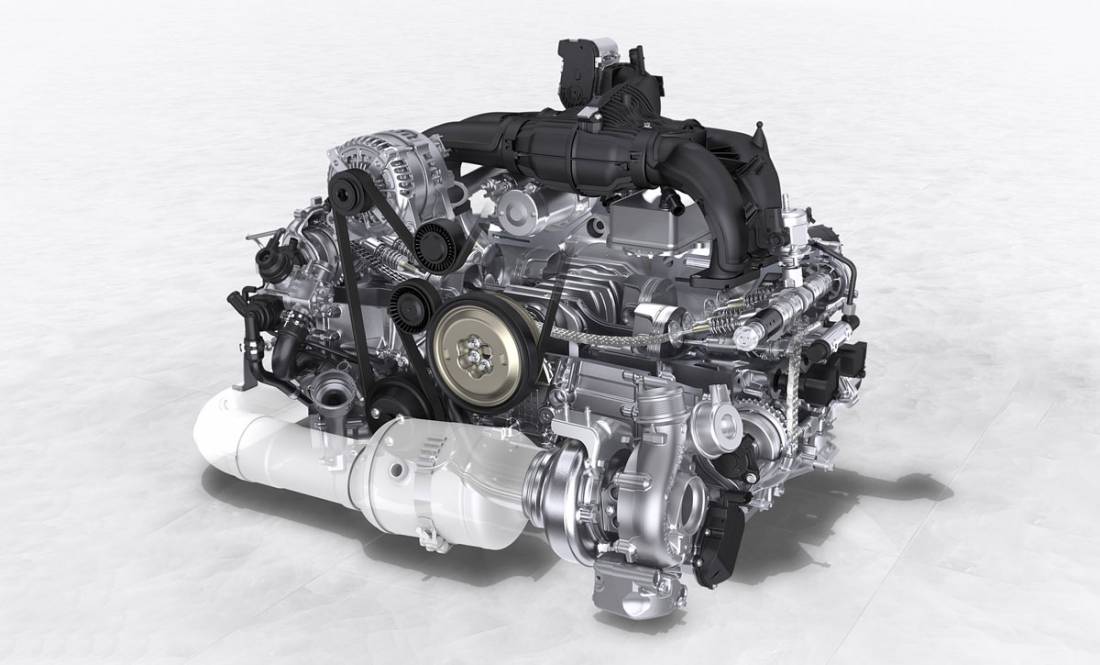 Porsche aficionados will be familiar with with a naturally aspirated flat-six engine in the back of a Porsche. A turbocharged flat-four engine in middle of a Porsche? Not so much. But when you drop two cylinders and bolt on a turbo, you also drop weight and this plays beautifully into the 718 Boxster’s ethos of supreme agility. In numbers, that’s a healthy 269kW pushing around a weight of about 1,400kg.

3. It’s not just a random name, it’s a tribute to punching above your weight. 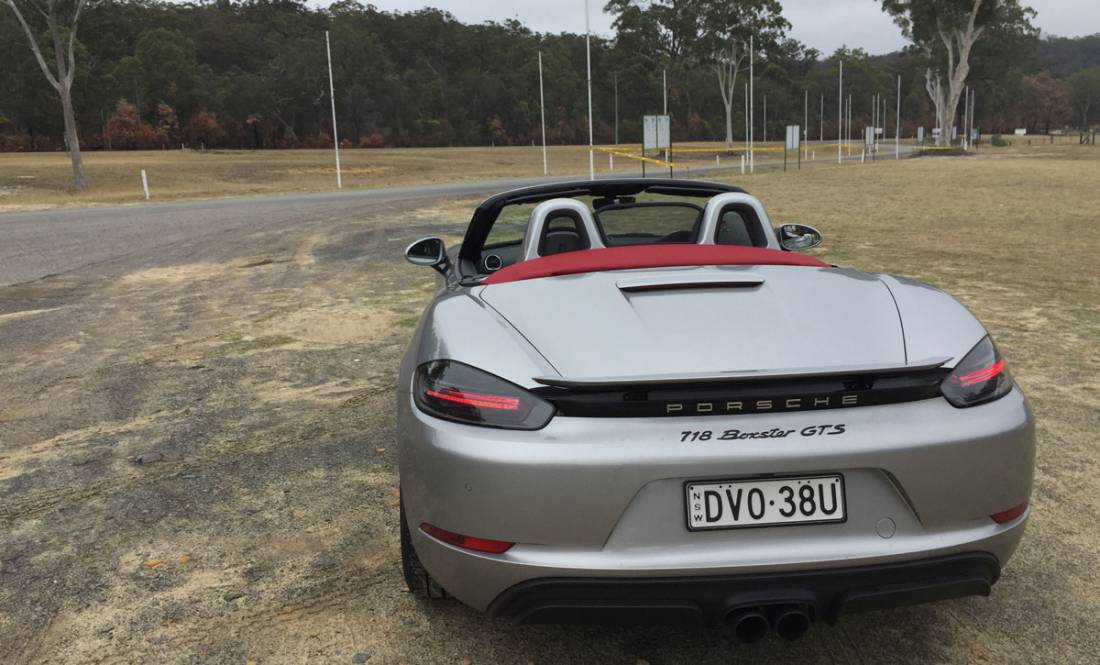 Even the 718 nameplate is a tribute to a racing series which was won by a lighter car that out-handled cars with bigger engines and power figures.

4. Balanced handling and feels like it’s on rails even in damp conditions 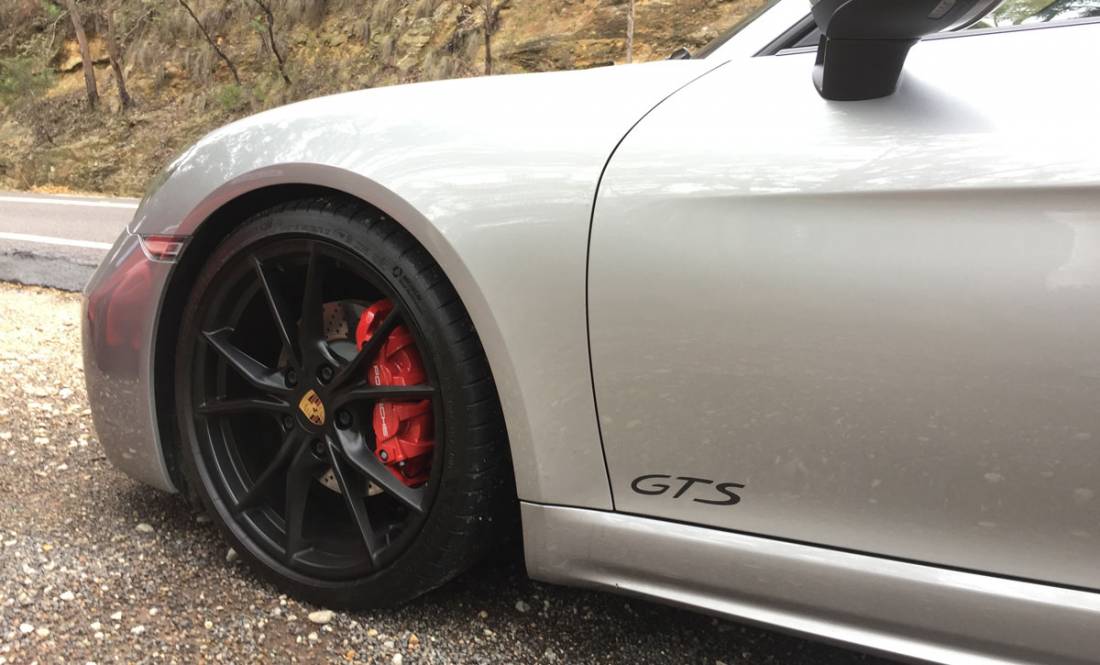 When you have a mid-engined rear-wheel-drive car that’s designed to go around corners at speed, you need an equal amount of stopping power and grip to ensure you pull up right. The 718 Boxster accomplishes this with four piston monoblock calipers front and rear accompanied by the insanely grippy Michelin Pilot Sport 4S tyres. How grippy? My friend driving behind copped serious windscreen stone chips from the rear tyres throwing up all the loose gravel. Oops. 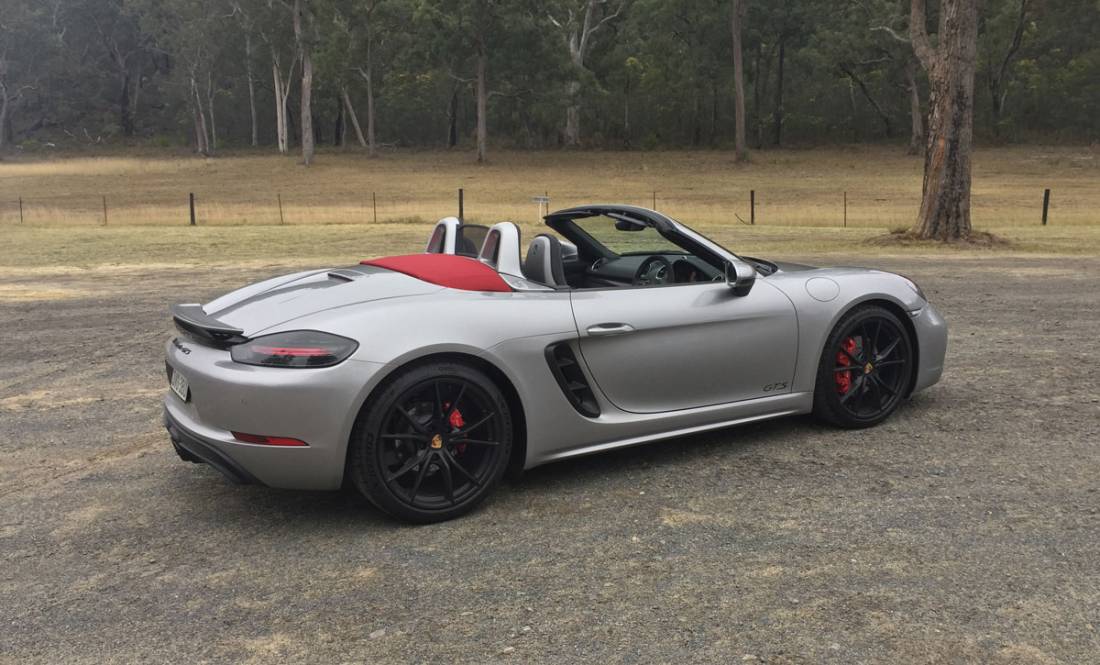 And we loved it for that very reason. Previously, we trialled the 911 Carrera T and parked it at our local gym. People stopped, marvelled and sniggered at our canary yellow beast. We put the 718 Boxster in the same spot and…nothing. With the roof up the car simply blends in (sort of) without looking like a $200,000 car. It’s subtle enough to park anywhere without needing worry, yet when the time comes to open it up, it performs exactly how a $200,000 car should. Needless to say, this is a car designed more for the modest enthusiast.

6. That noise isn’t so modest though… 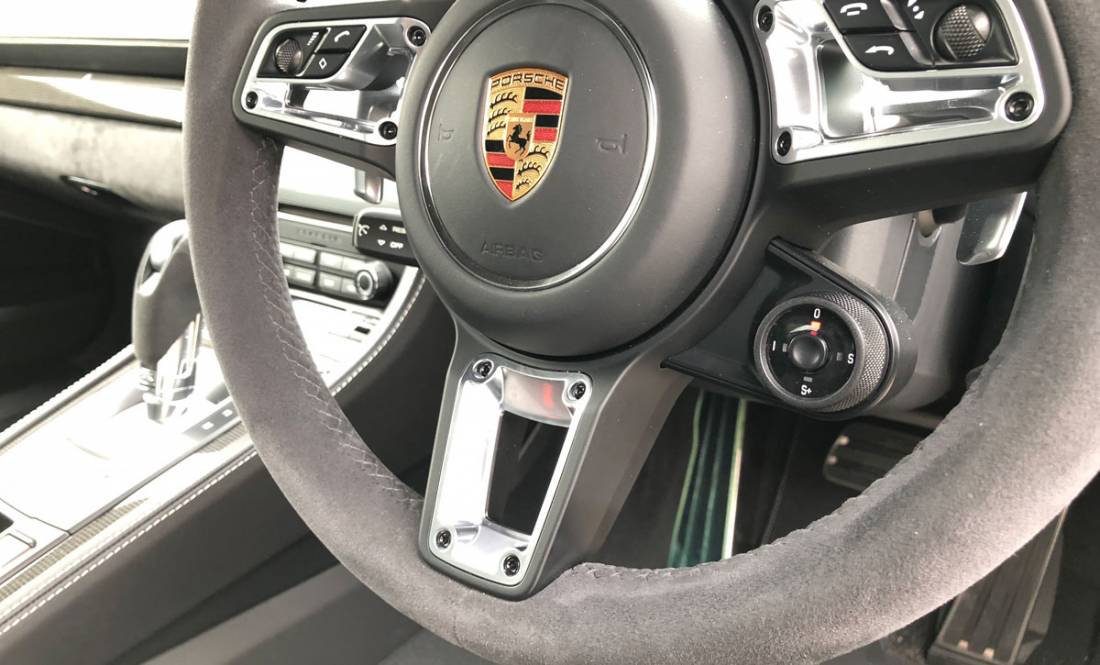 The drive mode selector on the Boxster is intuitive and fun as hell to toggle through. Rolling in traffic you’ll want the knob on the steering wheel pointing to ‘Drive’. When the mountain roads roll in, turn the knob to Sport + and the flat-four comes alive as the fully opened exhaust rumbles and burbles whenever you jab the throttle. The engine also idles higher to ensure you’re always in the power band. 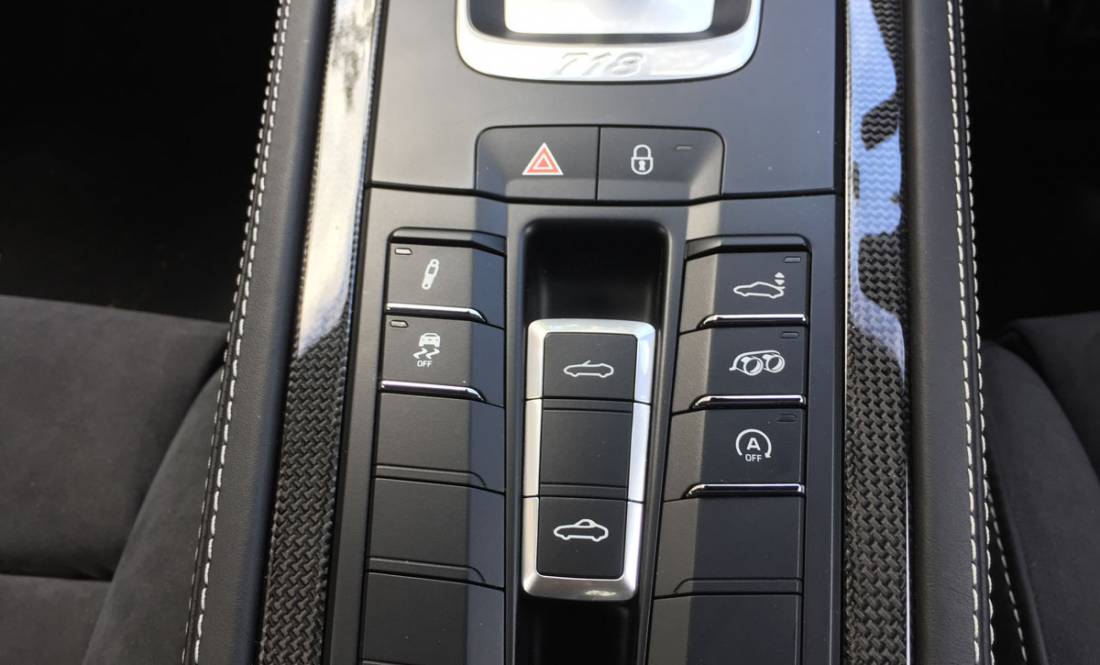 In Sport + mode the rear wing pops up whilst the suspension stiffens up. It’s lively, extremely balanced and feels exactly how a modern midship chassis should through the bends.

8. It’s German and that can only mean one thing… 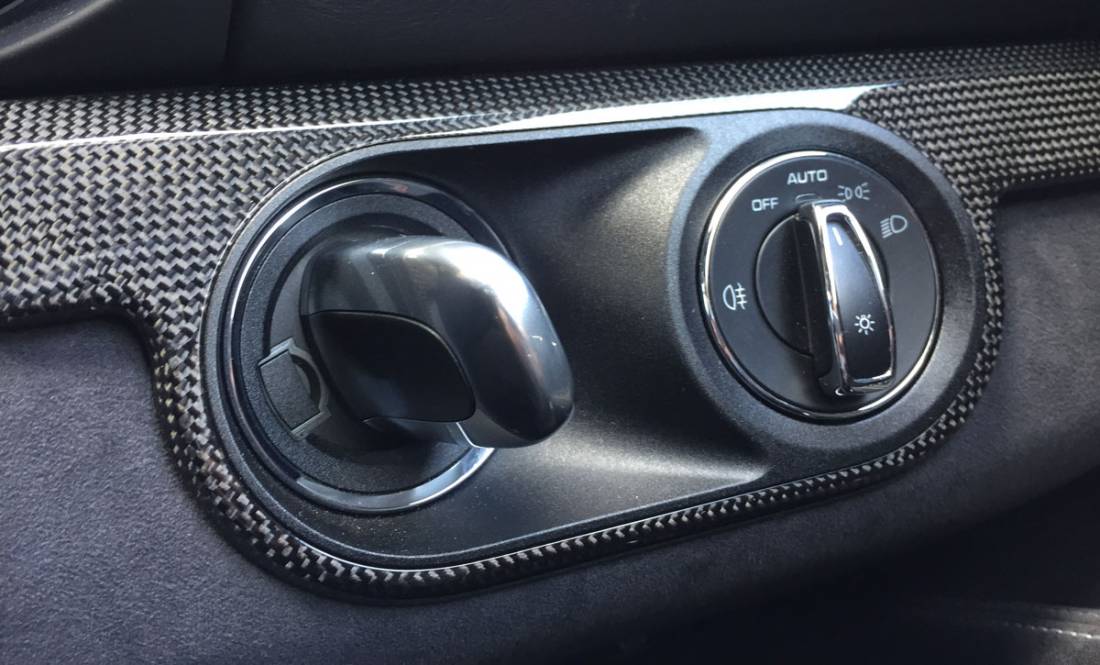 German build quality. Think tight fitting interior panels made from carbon fibre or aluminium and everything else wrapped in Alcantara – all of which feel as nice as they look. Even the automatic knob is wrapped in Alcantara – pointless since there’s no need to grip it whilst driving, but hey, because German.

9. Seats that make you feel like a race car driver 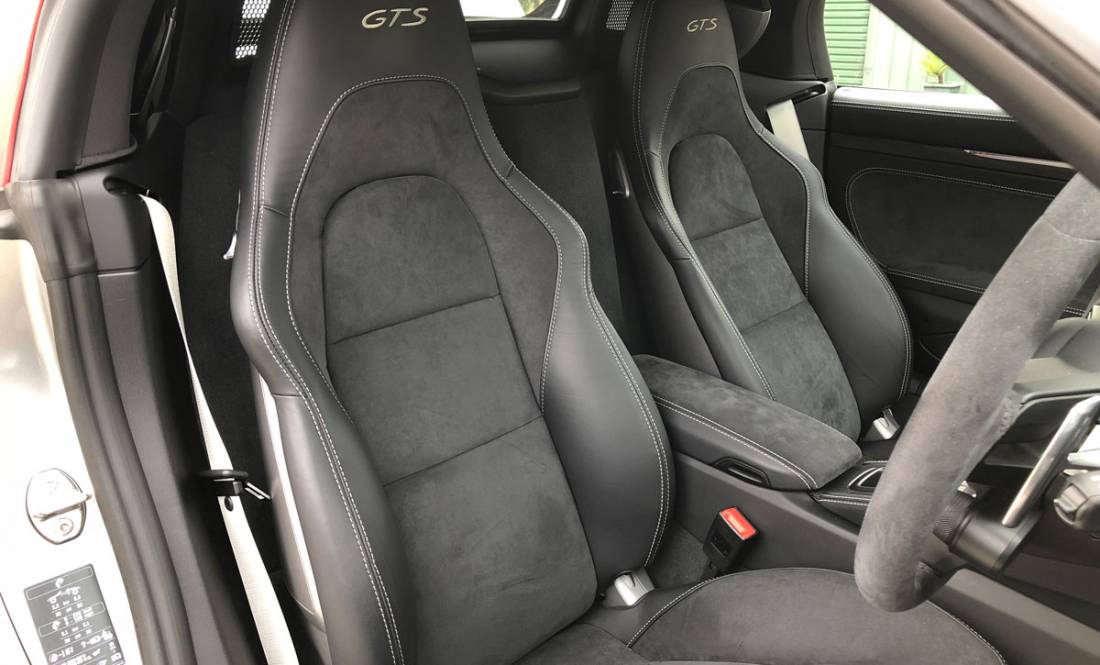 The Alcantara-lined seats kept our bottoms planted mid-corner at varying speeds and they’re perfect for enthusiast driving. Although you may need to play around with the lower lumber support during long distance drives to get the comfort right. Electronically adjustable side bolsters are also a plus.

10. It has proximity sensors on each corner 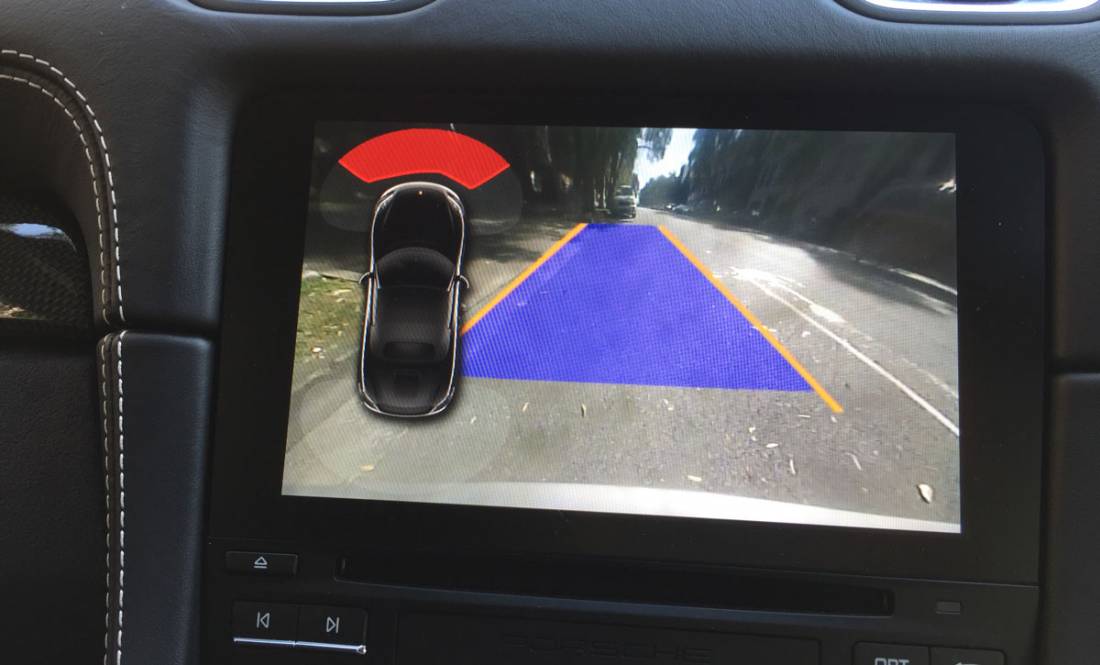 On a car that sits this low, you’ll need it in order to prevent bumping into things like parking stops, etc. 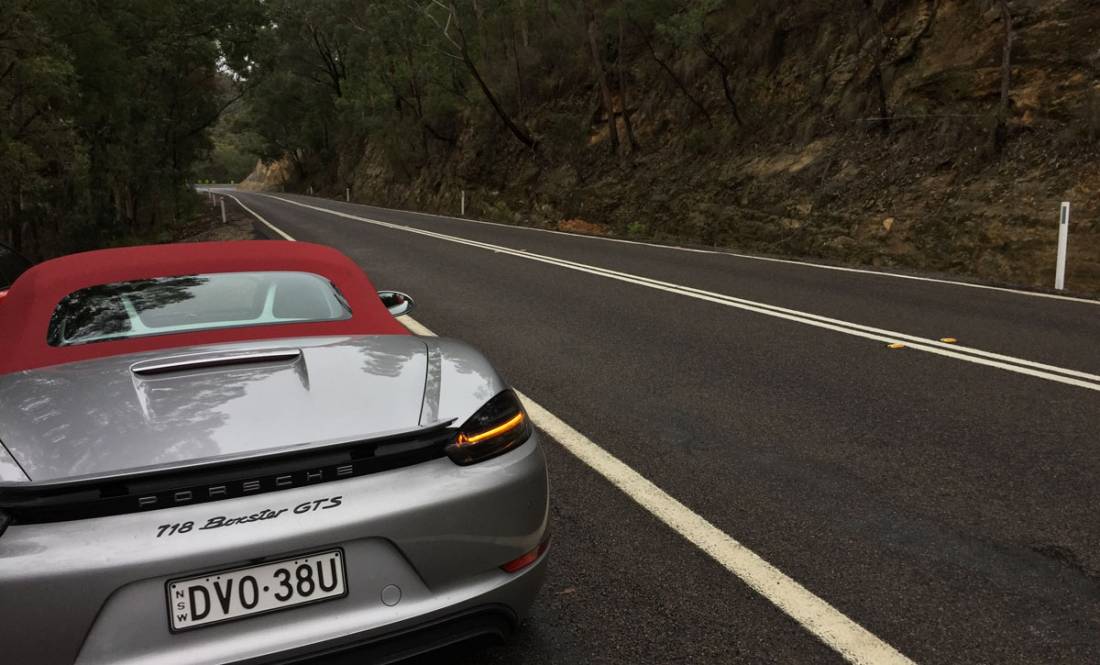 The driver vision takes a day or two of getting used to because the car is so naturally low. At some intersections where cars were parked adjacently and too close, I needed to creep out slowly before I could see past the parked car for oncoming traffic. Probably one of the downsides of driving a $200,000 car.

12. On the flip side, the rear vision was great

This was a big surprise to us. The rear glass panel was big enough with the roof closed and the rear camera also helped with reverse navigation. No impairments here.

13. The entertainment system’s ‘Jukebox’ function did our head in 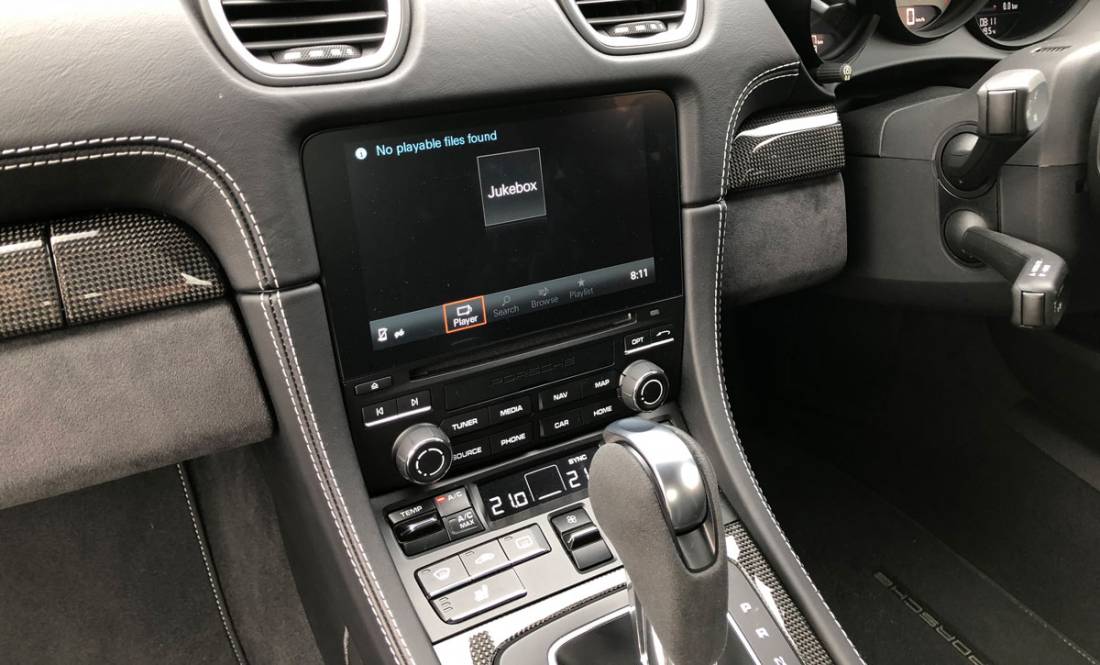 I use an iPhone 6 and apparently this wasn’t cool enough for the car’s entertainment system to recognise. File access was non-existent via USB or Bluetooth, so I resorted to listening to the sweet sound of the flat-four turbo for six hours of driving instead. The agony.

14. You’ll never get rained on 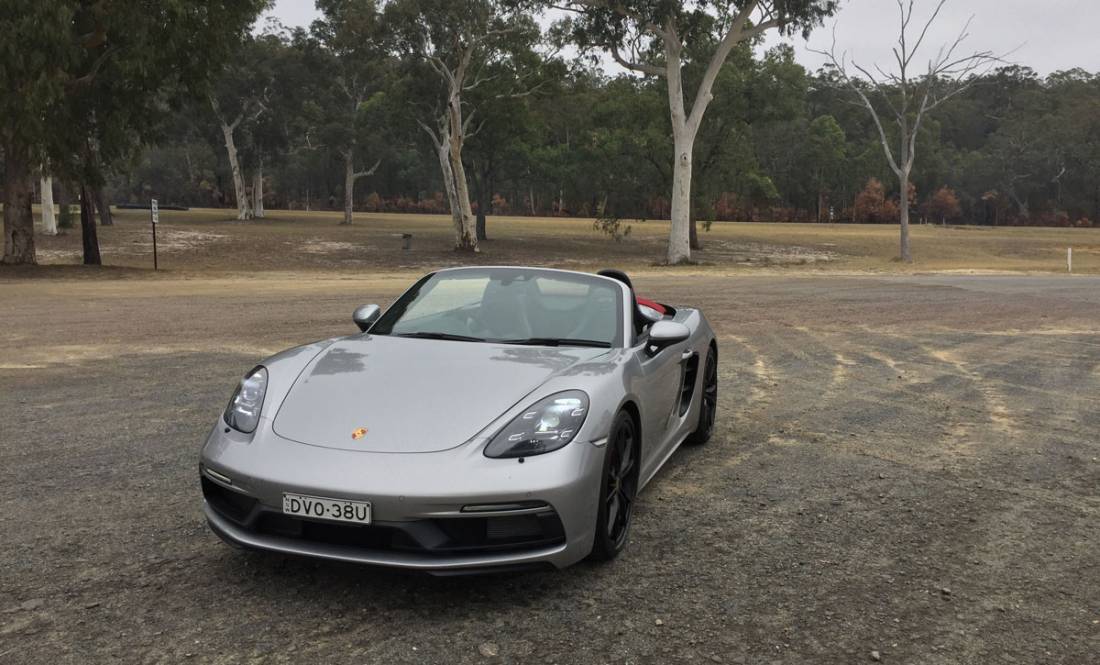 Button goes up, roof goes up. Button goes down, roof goes down. Don’t forget to hold button down until you hear the ‘click’ to lock. It’s that simple and takes a matter of ten seconds or so to complete the process. The roof fabric felt pretty sturdy too. No leaks, no noises or fraying.

15. It has useable front luggage space 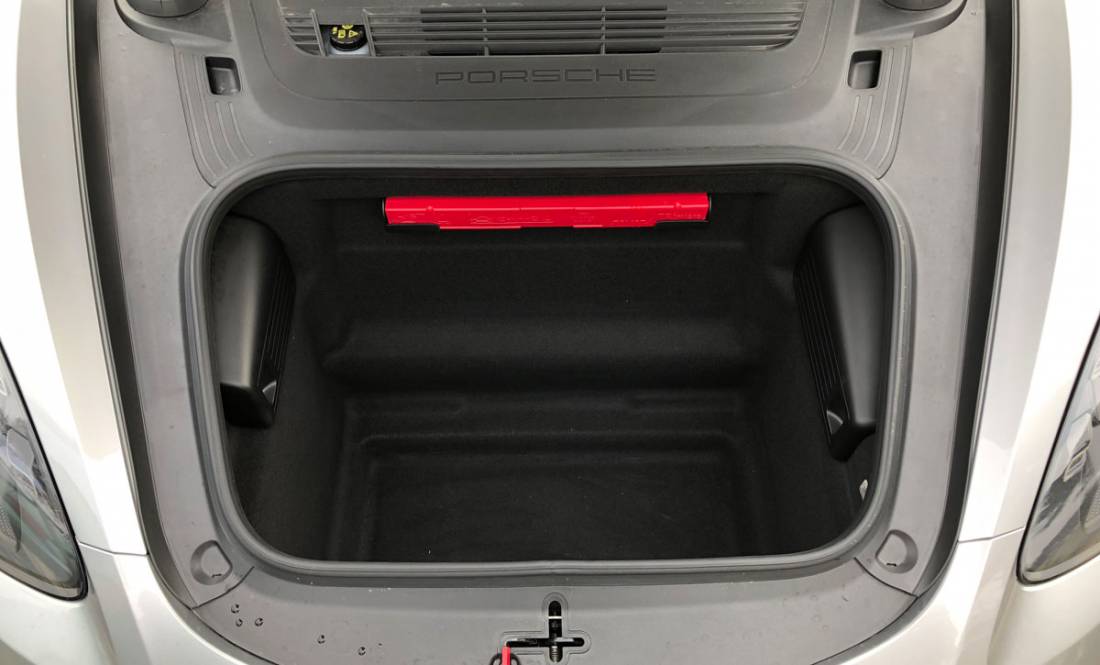 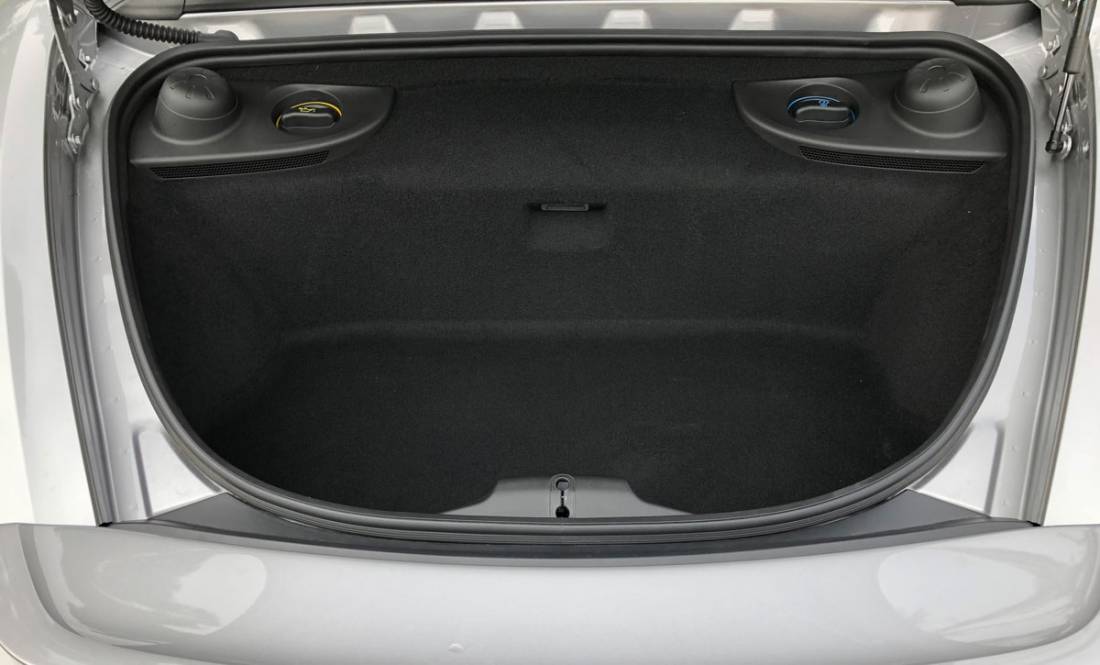 Now that’s what we call versatility in a performance car.