It’s hip to be square.

Huey Lewis and the News had it right when they declared it “Hip To Be A Square.” Although square and rectangular watches have always been in the minority compared to their round cousins, their appeal endures.

The shape is both modern and pleasingly retro, at once classic and contemporary. Square watches are perfect if you’re in the market for something slightly unusual but still versatile and wearable. Ten of our favourites square watches are below. 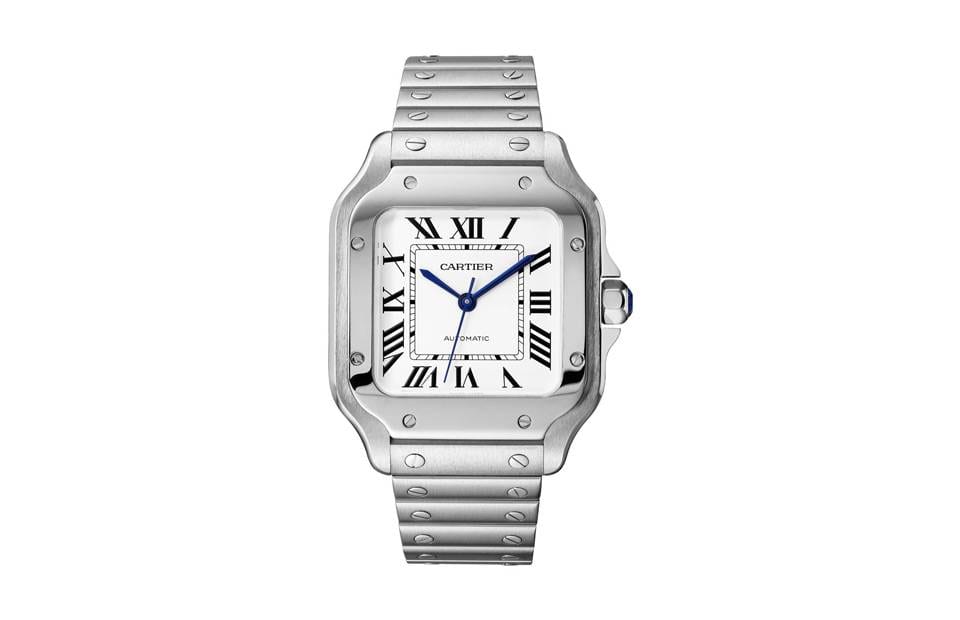 In 1904, after winning the Deutsch Prize for piloting the first machine to fly from the Parc Saint Cloud to the Eiffel Tower and back in less than 30 minutes, Brazilian aviator Alberto Santos-Dumont lodged a complaint with his friend Louis Cartier. He found it difficult to check his pocket watch during flight in order to time his performance, and asked Cartier to devise an alternative. The result was dubbed the Santos watch, which celebrated its centenary this year with a new steel edition of the iconic square timepiece. In 2018, the Cartier Santos was rereleased. This time with a refreshed design and interchangeable strap. 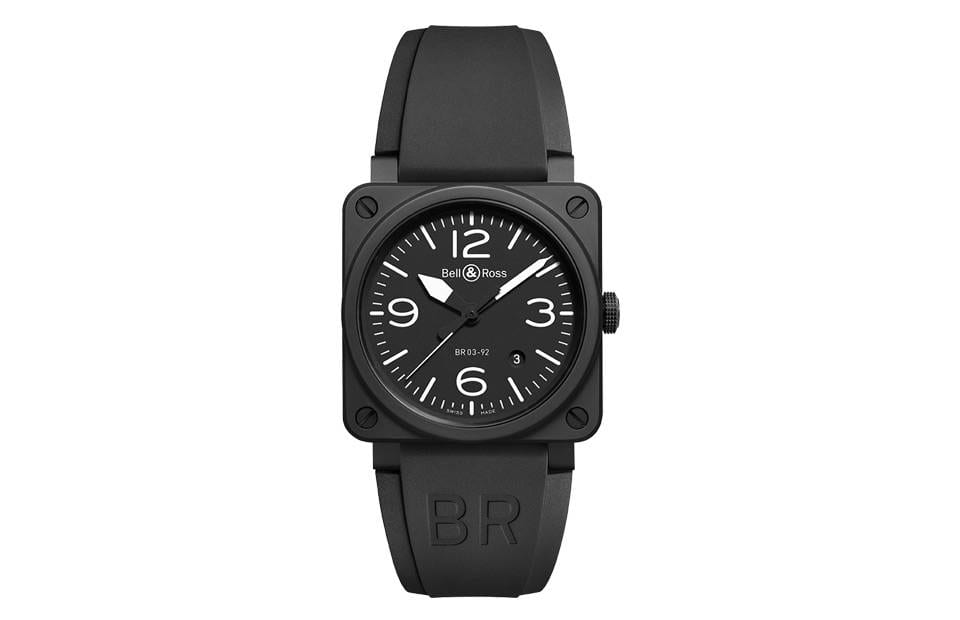 An aviation watch designed for professionals, the BR 03-92 is a 42mm diameter alternative to the larger BR 01. Bell & Ross gave the watch an update for 2014 in the form of a new protective layer of skin: a ceramic matte black case. As it was inspired by aeronautical instrumentation, the BR 03-92 brings its A-game in terms of readability, reliability and performance – thanks to a black dial with large white numerals and hands (all treated with Super-LumiNova luminescent coating), and an automatic ETA 2892 movement. 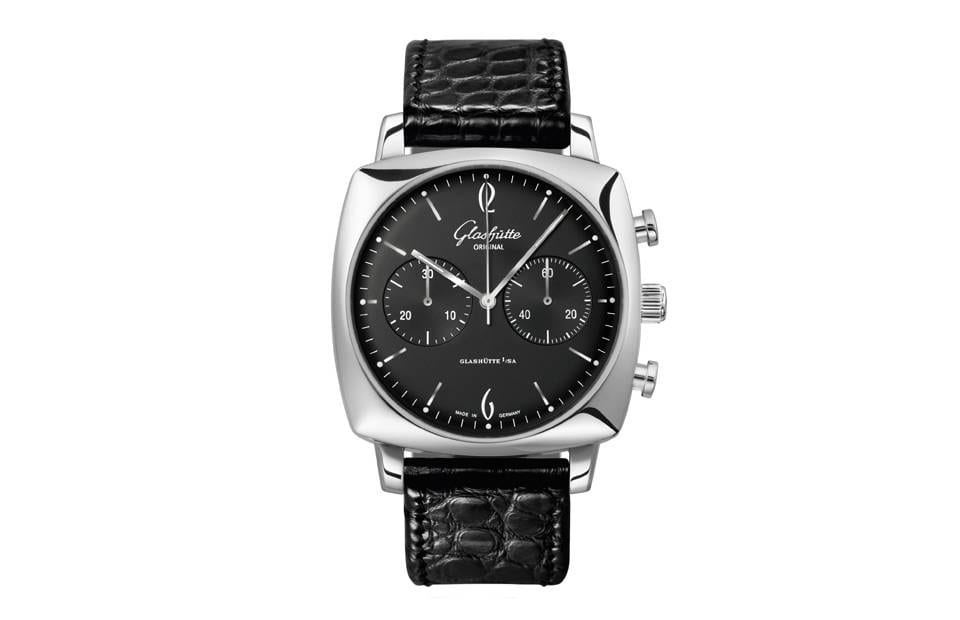 The design of the Glashütte Original Sixties collection takes its cues from the Swingin’ 60s. Amongst the many defining characteristics of the era was an appreciation of geometric forms, which was expressed across the fields of art, fashion and design. The squared cushion shape was popular at the time, hence the eye-catching design of the Sixties Square Chronograph. The black and white dial, with totalizers positioned at 3 and 9 o’clock, is simple, well-balanced and elegant inside the stainless steel case. Altogether, it makes for a distinctive and stylish chronograph. 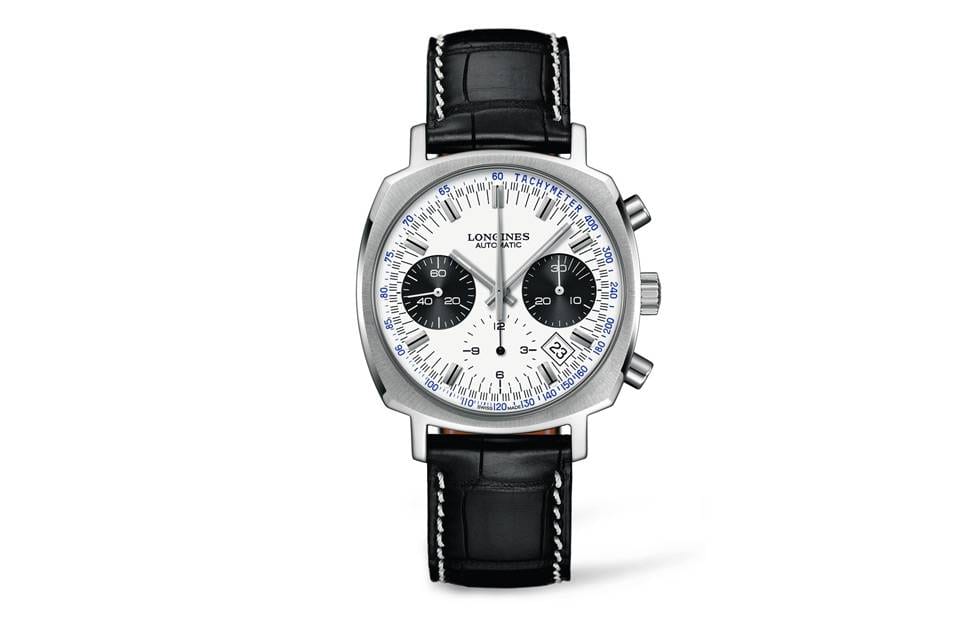 Longines combines the original beauty of its most remarkable early timepieces with cutting-edge watchmaking technology in the Heritage collection. The Longines Heritage 1973 is based on a historic Longines watch produced, of course, in 1973 with a mechanical chronograph movement, Caliber 30CH. The updated watch contains the Longines Calibre L688, produced exclusively for Longines by ETA, inside a 40 mm period-appropriate curved case made of stainless steel and topped off with a black alligator leather strap. 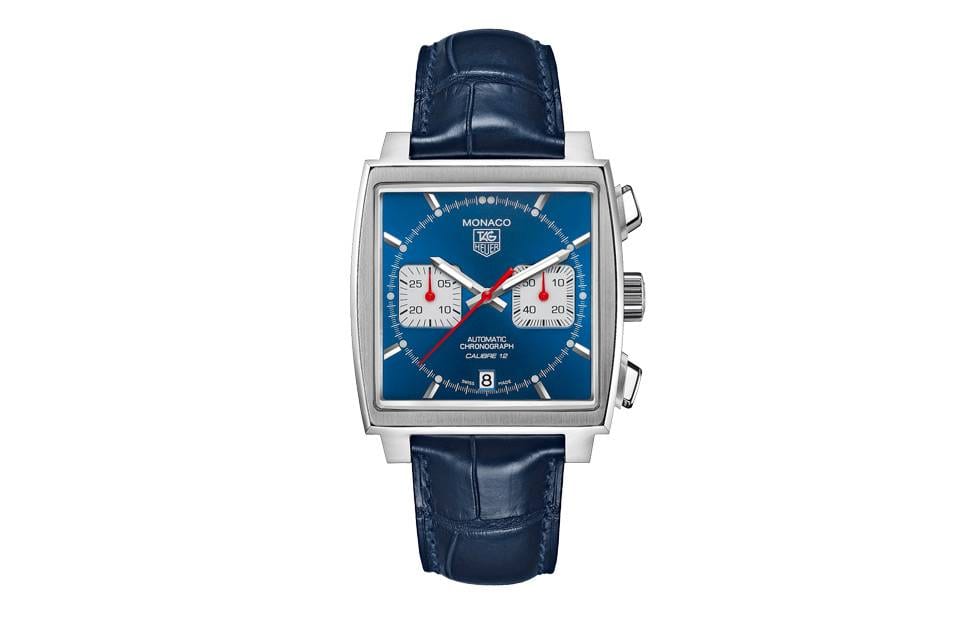 Avid fans of classic sports cars and watches will find a lot to love about the TAG Heuer Monaco watch models. The original debuted in 1969, and the newer Monaco Calibre 12 Chronograph retains its classic square case design. What it updates is what’s under the hood: the Swiss-made TAG Heuer Calibre 12, which you can see in action through the sapphire crystal caseback. On the front side you’ll find two square counters at 3 and 9 o’clock that measure small seconds and chrono minutes, as well as a small date window at 6 o’clock. 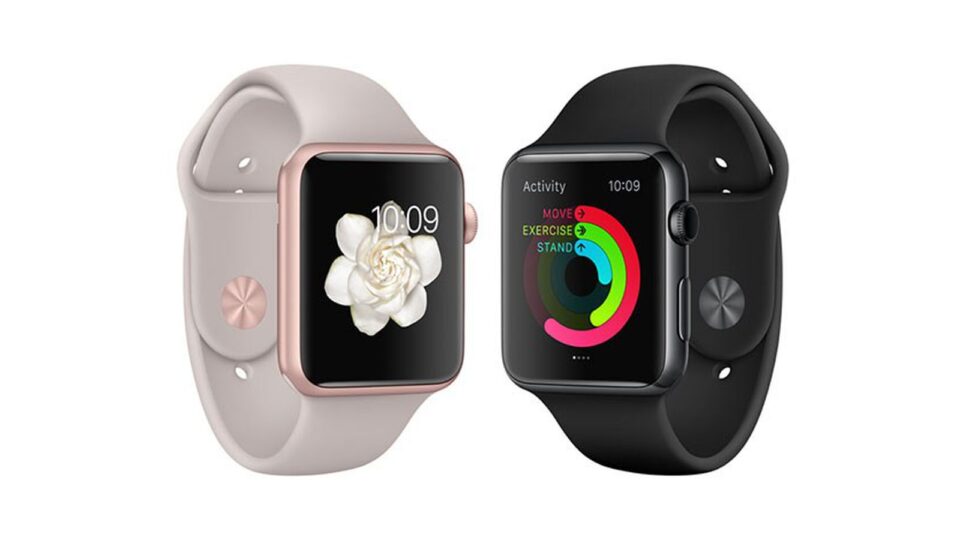 It’s onto its fourth iteration now but that doesn’t mean the Apple Watch is running out of tricks in the bag. The latest model which also happens to be square in shape features more connectivity, more active apps and a built-in health checker. Making sure you get the most of these features is a screen that is now 30 percent larger paired to a thinner case. You can also listen to Podcasts on the Apple Watch. The unit comes in a choice of three standard aluminium finishes – anodised silver, gold and space grey. The gold stainless steel variant comes with a matching Milanese band alongside silver and space black stainless steel models 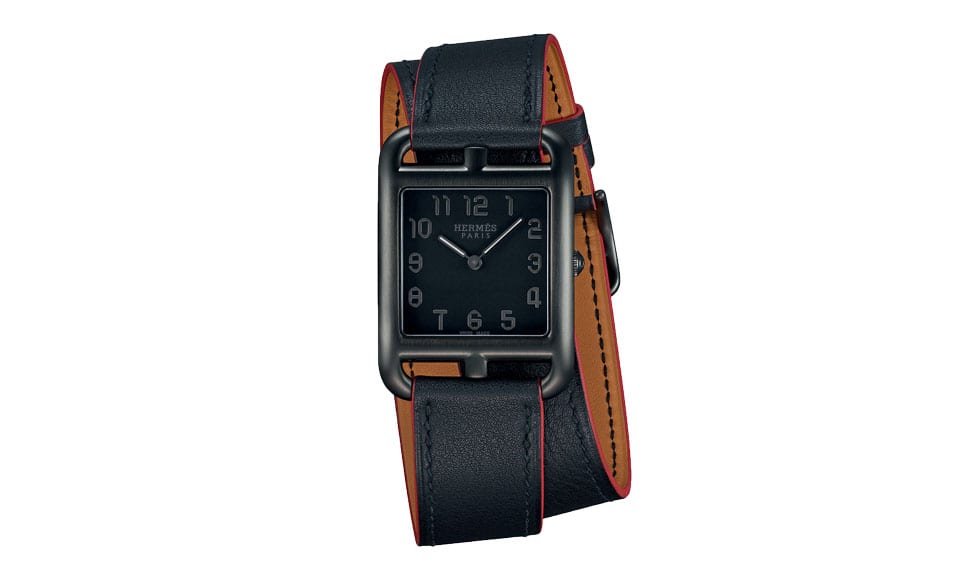 For a truly fashion-forward square watch, look no further than Hermes’ offering in the Cape Cod. The piece is completed with black DLC-treated brushed steel finish and measures in at 29 x 29mm. It’s not the cheapest for a quartz movement but its is made in Switzerland and it features a black Barenia calfskin with polished red trim. Water resistance is also decent at 30 metres. 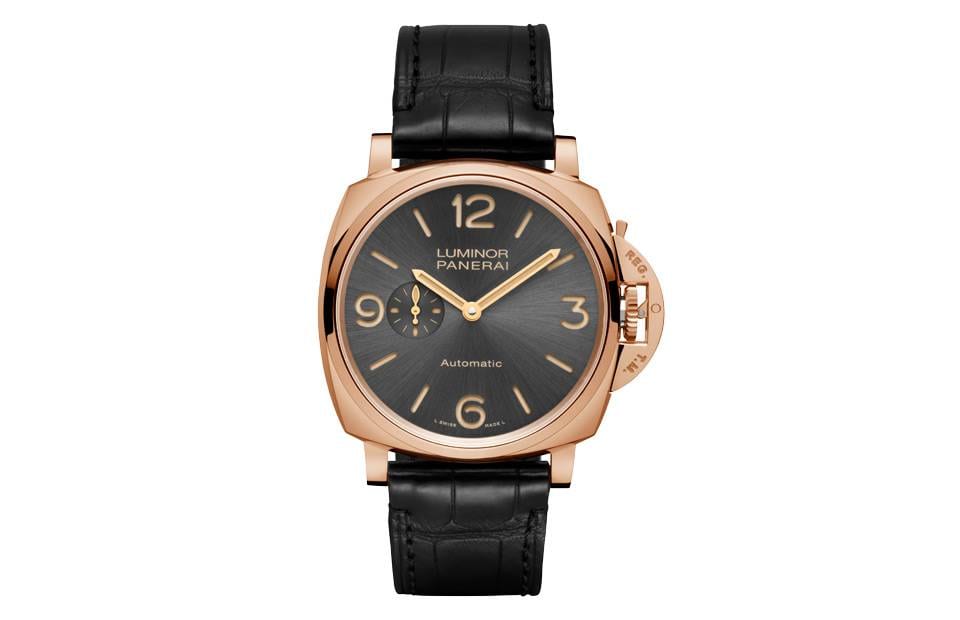 Okay, we’re pushing the notion of ‘square’ here a bit, but the Luminor collection from Panerai is worthy of making the cut thanks to its rich diving and naval heritage that hails back from the 1950s. Countless Luminor models exist in the iconic Panerai case and crown-protecting bridge. Traditionally they’ve been big, bold and robust but in recent times the Luminor model line has been expanding from 45mm variants to the smallest 38mm variants. The DNA of course remains, but the Luminor is now a watch that can be worn in a dress setting as much as a diving one. 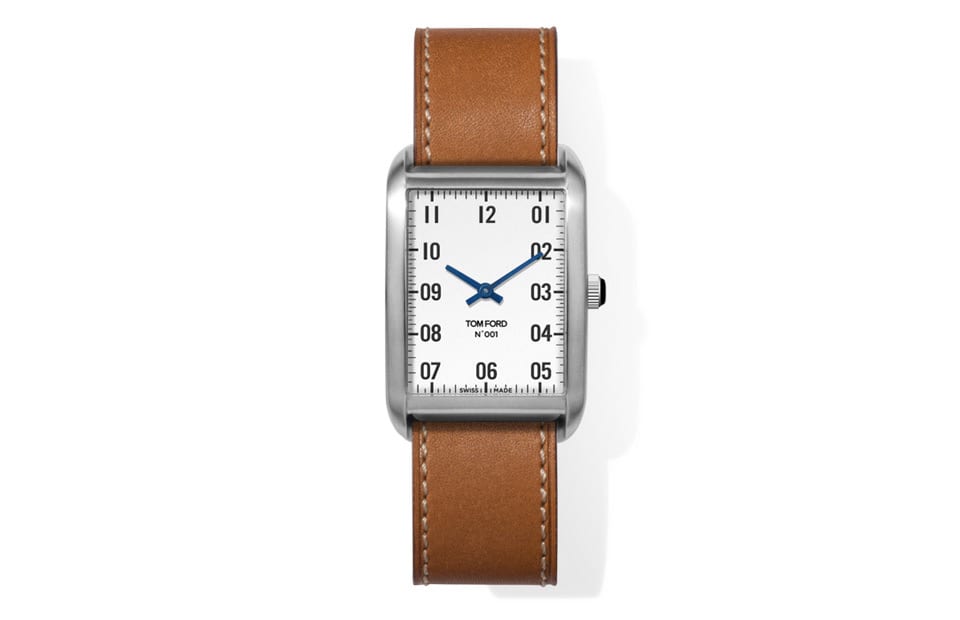 The younger man in the black suit brings his signature aesthetic to watches and this is the result. Tom Ford presents the 001 timepiece, a Swiss made unit featuring a brushed stainless steel square case which comes with a white opaline dial (there’s also a black version) paired to diamond-cut blued steel hands. A nice touch is the French-made pinless cognac coloured leather strap which hooks on nicely to the 30mm x 40mm case. Movement is sorted with quartz whilst water resistance is set at 30 metres. 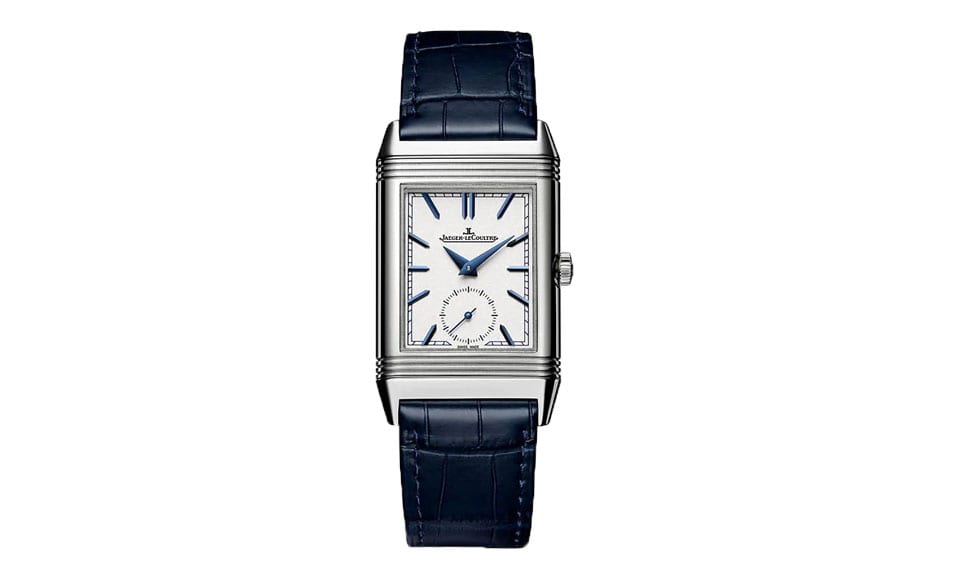 A true throwback in the square timepiece game is Jaeger-LeCoultre’s Reverso collection. The watch first appeared in 1930 and was designed as a sports watch believe it or not. A reversible case design meant that the dial could be protected whilst playing polo. These days it’s more of a signature design language of JLC rather than a sports necessity. The watch has spawned countless versions and has also become a classic of the art deco movement.