Fake Tequila Is Flooding The Australian Market, But There’s A way To Tell The Real Deal

Made in Mexico…so you think.

Pause that ‘Tequila’ song. Fake Tequila is no joke in today’s highly lucrative drinks industry and you could be drinking it right now. Whilst whisky is today’s most popular spirit in the fraudulent stakes due to its high global demand, fake Tequila entering the mainstream markets is also on the rise.

According to an ABC investigation from 2018, counterfeit Tequilas are entering the market and being served as house spirits in bars and pubs. They’re also being sold in independent liquor stores across the country’s biggest markets. The fleece even goes as far as one rogue operator creating spirits by mixing raw ethanol and flavourings.

So the question is, how do you tell the difference between real Tequila and fake Tequila?

We hit up one of Australia’s Tequila experts and general manager of The Corner House, Brett Harris, to let us know his secrets on spotting a fake Tequila from a mile away. His proven techniques will surprise you.

How Fake Tequila Is Making It Onto Shelves

Contrary to the recent reports, fake Tequila has been around for a long time.

“Six years ago or more we’ve had them at my old work place just to show people the difference,” says Harris.

“We’ve got laws now which is in line with the Mexicans. The health related one is that a fake Tequila can’t have ‘Tequila’ written on the bottle.”

According to the reports and Harris’ own experience, a lot of the fake Tequilas are either distilled locally and then distributed or made overseas and then imported over to where Tequila’s big markets are.

Of the ones made in Australia, Harris says that none of them have agave in them – the main ingredient of real Tequila.

Whilst real Tequila needs to be 100% agave, non-100% agave Tequila can also be bottled outside of Mexico. The latter can express properties of 51% agave sugar and 49% of any other kind of sugar. According to Harris, it’s something “a lot of people” do.

The simple answer, as with all things counterfeit, is money and trends.”People just see markets to exploit and that’s anything with alcohol now,” says Harris.

He adds that premium tequilas are also the ones driving fakes into the market. A closer analysis of social drinking trends will reveal that Tequila had its day in the sun, then whisky and now it’s gin’s turn to step up. With Tequila on the brink of a resurgence, Harris says that savvy customers are now starting to get into brand association and this makes it lucrative for non-legitimate makers.

“With the internet now, you have a little interest in the thing and you can find out everything about the brand you want. People are legitimately pining for the Fortaleza and the Ocho Tequilas; people are knowing.”

How To Spot The Difference Between Real & Fake Tequila 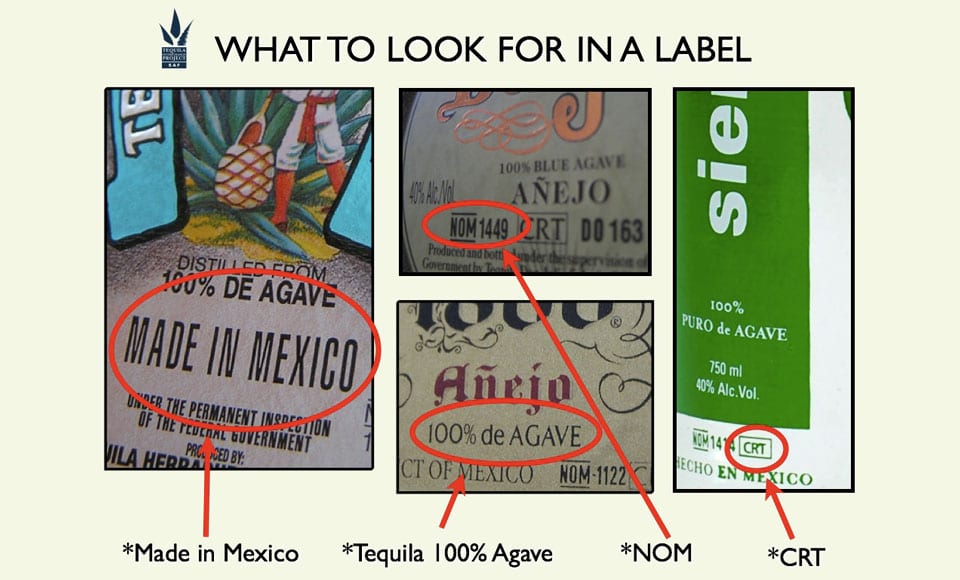 If you’re in the market for decent Tequila then you need to know these tips and tricks before dropping your cash on something that’s potentially harmful. Here are some of Harris’ tips.

This essentially means the spirit is locally made from imported ingredients. Real Tequila has a denomination of origin on the label like champagne would. Real Tequila also has to be from Mexico and it has to be from certain states as well. Look out for dubious label spelling like ‘Te-Quila’ as these aren’t real.

Harris says fake Tequilas have limited information on the back of the label.

“Fake Tequilas like Chiapas, it looks like it never got out of the 80s. The label colouring, the lettering.”

“All real Tequilas have a denomination of origin number where the distillery has its own number,” explains Harris.

He recommends getting an app called Tequila Matchmaker which allows users to find out about a Tequila by just entering its name or NOM number. The app will show you what brands are made at this distillery and more.

Whilst whiskies have bottle designs that are often copied, Harris says this isn’t the case for Tequilas as it’s easy to make their bottles similar. Instead he says to look for other visual cues in the liquid itself.

Fake Tequila will often display a gross clear liquid. This has to do with the liquid’s viscosity.

The bartender’s test you can conduct yourself is called looking for ‘pearlers’.

Harris says that smell is harder because it depends on where it’s made and there’s so many different tastes.

For the average person, look for that sweet cooked agave taste in a real Tequila. Tequila from up in the highlands is a different taste from something in the valley where Cuervo is produced.