Collecting Rare Whisky Will Make You Rich, According To New Luxury Asset Report

Time to stock up.

Did you see this coming? You should have.

The latest wealth report from Knight Frank’s Luxury Investment Index has revealed that rare whisky is now the most lucrative investment in the luxury asset space. 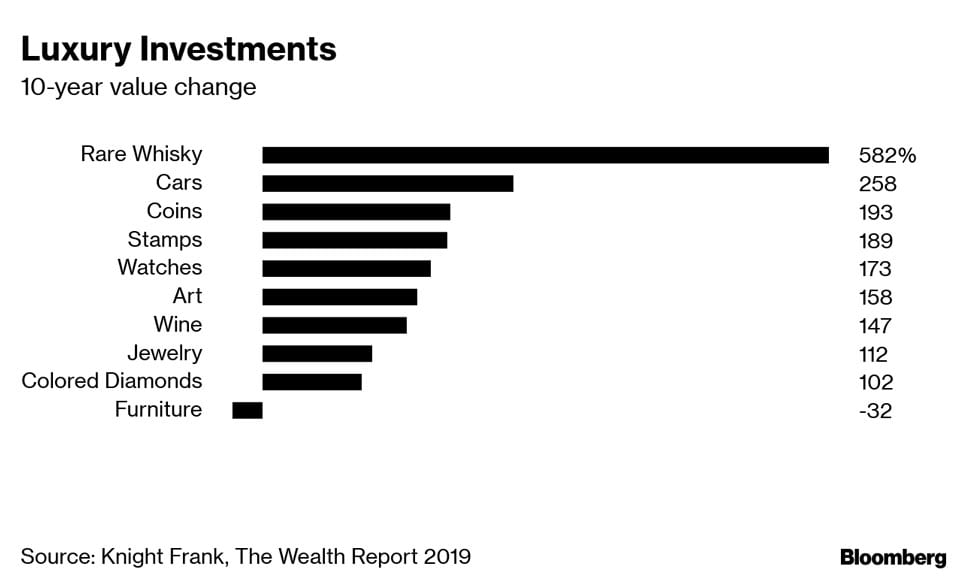 The latest data reveals that over a ten year period, rare whisky reached a return on investment of almost 600 percent. That staggering figure was enough to put it ahead of more familiar investments like cars, watches and jewellery. In 2018 alone, rare whisky saw a 40 percent jump in value.

Bradley Woolfe who runs WhiskyDirect, an online retailer specialising in premium Japanese and ultra rare whisky says that this statistic can be attributed to the strong growth in demand from Asian countries, particularly China, which has seen sustained economic growth.

“A large number of Chinese individuals now have extremely high levels of disposable income and a preference for purchasing luxury items, including high end whisky,” he says.

“This exponential growth in market demand coupled with the limited supply of whisky, particularly ultra-aged and limited releases has seen prices skyrocket in recent years.”

Woolfe explains that another aspect to consider is the proliferation of sales on the secondary market, namely auctions. Buyers here often dictate what they are willing to pay for a bottle irrespective of the original price set by the distillery. The result? A high-rollers game of who’s got the bigger bank vault.

Regardless of all the hype that is engulfing the rare whisky market, Woolfe believes there’s still plenty of opportunities for newcomers to make calculated risks with emerging distilleries.

“It only takes a whisky to win one of several awards around the world to quickly see the price increase three-fold or more,” he explains.

“The clearest examples of this are numerous Japanese whiskies including the now famous Yamazaki Sherry Cask releases and our very own Sullivan’s Cove single casks.”

If you’re thinking of joining the rare whisky game you’ll need to be aware that there are risks involved like any other investment. Currently the market trend points to healthy appreciation into the unforeseeable future, but should that change quickly overnight, you’ll at least have a decent bottle of whisky to knock back.