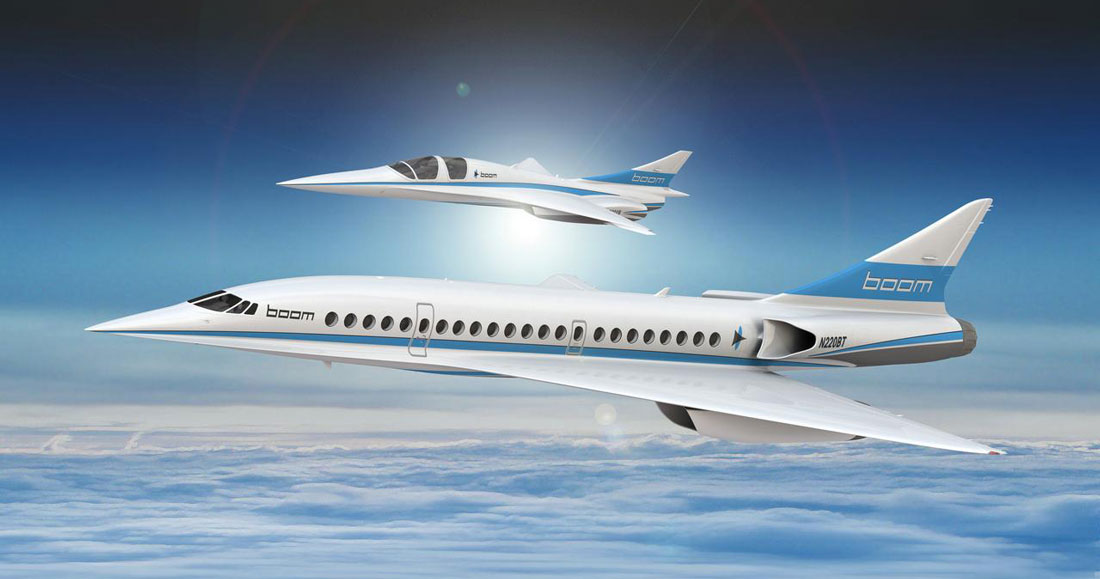 Whether it’s the security strip search or the fact you’re hurtling through the air in a glorified tin can, flying is arguably the most stressful travel experience. Don’t believe us? Just compare a Sydney to Dubai red-eye with a Paris to Venice overnight train; you’ll only wake up to butterflies in your stomach and a world-class Macchiato on one of the two.

But while ground-based transport has a certain magic about it, some trips require airborne locomotion—something we figured out in the 1950s, when mass air travel first took off. Since then, as happens with new technology, we’ve seen rapid improvements to users’ (in this case, passengers’) comfort and privacy across all classes (even Economy).

However, bar the Concorde’s infamous stint from 1976 to 2003, we haven’t seen a reduction in commercial flight times. In fact, in the last few decades, airlines have been getting slower. This is because flying faster than the industry standard (let alone beyond the speed of sound), given current technology, regulations and passenger expectations, is not economically viable.

Enter: Blake Scholl, the CEO of Boom Supersonic, who recently told the Should This Exist podcast that he aims to get people “anywhere on the planet in four hours for a hundred bucks.” While this sounds like a pipe dream, his company has received investment from both Japan Airlines and Virgin and is taking real-world steps to make it happen, step by step.

“Just as the jet age changed everything in our lives, a double-speed of travel could change it again,” (Should This Exist).

Competing against Spike Aerospace and Boeing Aerion, Boom Supersonic’s first goal is to create a 55 seat business class jet that—like the Concorde—can travel twice the speed of sound (two and a half times faster than today’s commercial jets). Unlike the Concorde, Boom Supersonic—according to Blake—will succeed. Of course—he would say that. So let’s take a look at his reasons.

Firstly: the Concorde was a public venture between the British and French governments, which—Blake reckons—failed to attract customers because it was a Cold War Era show off project; not because its technology was flawed: “When you do things for glory, well, you can do them. You can do things that are technologically very, very impressive. The problem is when there’s no requirement of a commercial model, it’s a bridge to nowhere.”

Blake also believes Boom Supersonic will overcome the other challenge the Concorde faced (being banned from flying over most countries due to the sonic boom it emitted), by flying routes like San Francisco to Tokyo, New York to London, Seattle to Shanghai, LA to Sydney and Tokyo to Perth—all of which are in-demand business travel routes, which take place over open ocean.

Even though we’ll shave hours off your itinerary, we still think the short time you’ll spend in the air should be something to look forward to. Enjoy a space optimized for both productivity and relaxation. #flysupersonic #aviation #passengerexperience

First, Blake has to design a jet faster than the speed of sound (1234.37km per hour), coming up with enough thrust to overcome the drag (which gets stronger at higher speeds). To do this, he says, Boom Supersonic is designing something that “looks like a fighter jet but flies like an airliner”.

He also believes that, over time, his company will, “Get supersonic to the point that everyone can afford to fly it,” imploring people to look beyond the exclusive initial offering, which is reportedly planned to begin service in 2023: “This is not about 55 passengers going Mach 2.2. This is about getting anywhere on the planet in four hours for a hundred bucks.”

When asked how he would make this a reality, however, he admitted it was somewhat out of his hands, explaining that it all comes down to consumer demand.

“If we look at Overture, our first airplane, with 55 seats, it’s like the Tesla Roadster in that, yeah, that was an expensive car for a small number of people and you could say, ‘Who needs joy rides in these superfast showy electric cars?’… But now we have the Model S and the Model 3 and we see the trajectory of where this is going…”

Initially, however, he aims to attract business class customers, charging around $5,000 for a round trip New York to London ticket in his prototype jet Overture. The success of this will be crucial because it will give Boom Supersonic (and their financial backers) confidence to start investing in larger—more accessible—aircraft.

“There are things you can do with the aerodynamics in a larger aircraft, that you just can’t do on a smaller one – and what that means is that the fares can go down. And when the fares go down, more people can go more places, more often. And you start to get a flywheel spinning,” (Should This Exist).

“When we make enough progress in fuel-efficiency,” Blake told Should This Exist, “There’s a tipping point… that we’re going to see in our lifetimes… where the fastest flight actually becomes the cheapest one.”

“This isn’t science fiction, this is just engineering.”

While only time (and ticket sales) will tell, people’s reactions on Twitter range from cautiously optimistic:

I always thought that discontinuing the Concorde was somehow a sign of decline. I also feel that #technology answers our societies needs so it is normal to see supersonic planes return. Let’s see how they deal with contemporary environmental concerns #ShouldThisExist https://t.co/wfxbAf8HcP

#shouldthisexist Supersonic flight? Yes, yes, yes! My son and I have agreed that if @boomaero is successful, we’ll take a flight together somewhere 🙏 😉 🚀

Remember though—before we get carried away—everyone was super excited about Tesla before their sales started to plunge. So while it’s fair to say supersonic flights are a promising development—just because they are cool new technology doesn’t mean they are a guaranteed home run.