“I don’t want to put a bad comment on TripAdvisor… but I would like for us to find an arrangement.” 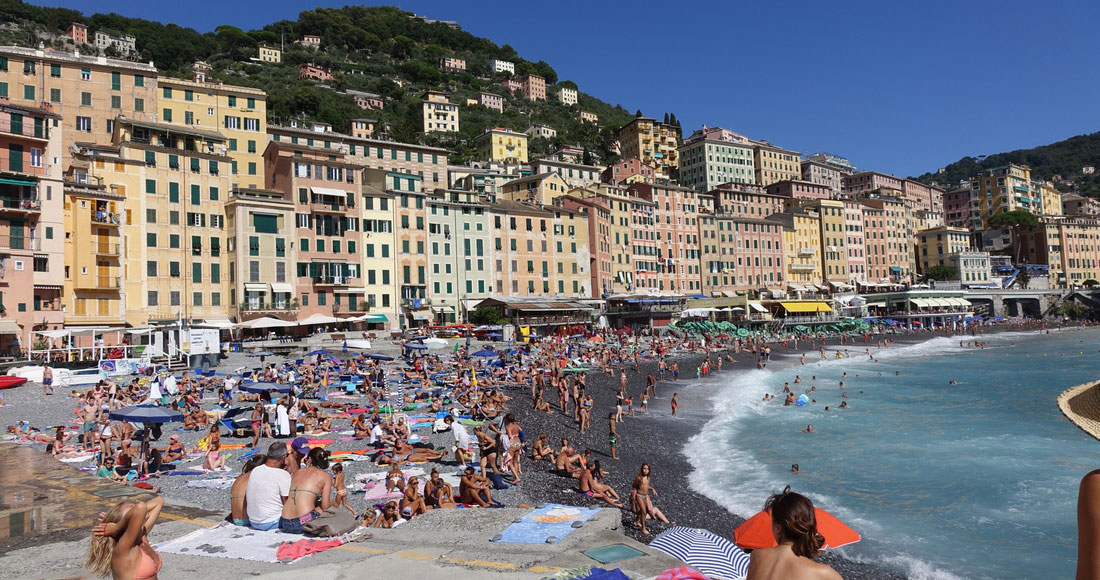 Camogli is better known for pastel buildings than controversy. However, judging by a recent argument between a boutique hotel owner and one of his guests, the Italian Riviera’s electric blue water is not the only thing that can make your heart jump like a faulty pacemaker.

The source of the conflict? Although the hotel I Tre Merli Locanda advertises itself as “a night that dreams are made of in Camogli’s harbour,” treating guests to “view[s] over the fishermen marina and the open sea,” one French tourist has taken issue with her particular vista.

“At first you see the pictures, and it looks amazing” the woman wrote on Tripadvisor. “We thought the room was very expensive but thought ok the view is worth it! Well NOT AT ALL! This is what we got!” 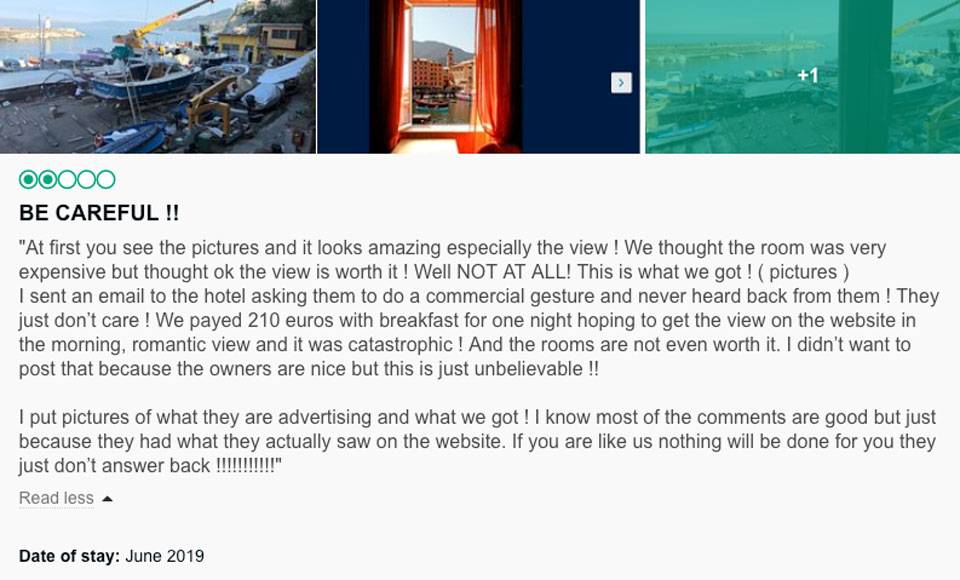 “I sent an email to the hotel asking them to do a commercial gesture and never heard back from them” she continues. “They just don’t care! We payed 210 euros with breakfast for one night hoping to get the view on the website in the morning, romantic view and it was catastrophic! And the rooms are not even worth it.”

“I didn’t want to post that because the owners are nice but this is just unbelievable!!”

“I put pictures of what they are advertising and what we got! I know most of the comments are good but just because they had what they actually saw on the website. If you are like us nothing will be done for you they just don’t answer back !!!!!!!!!!!”

Reading this, it’s easy to take her side. That is: until you see the response from the hotel owner, entitled “Bad Reviews & Discounts,” which appears to expose a growing trend of tourists trying to bully hotels into giving them discounts and accommodating their booking mistakes.

“Our inn has only 5 rooms on the second floor of a building in Camogli’s harbor,” the owner begins. “Two rooms have a view on the harbor. Two rooms on the harbour’s inlet with the pier and the ancient beacon. It is difficult to determine which view is better. The rooms overlooking the inlet have also a view of the open Tirrenian Sea, Portofino’s promontory and the Riviera seacoast all the way to Genova [and] the last room… on the corner of the building… has both views.”

“Recently we had an influx of clients who try to obtain a bargain with the threat of bad reviews. This seems to be the case here. Below is a transcript of the email exchange with this client.”

“Hello, Yesterday afternoon I booked a room for two for today just one night, we were on the road on the way to your hotel but unfortunately we need to fly back to Bordeaux, my grandmother is at the hospital .. I know about the cancellation policy but you can check we just booked it yesterday… could we have a refund… it is a lot of money we wanted to have a romantic weekend and will definitely do it when we come back but unfortunately know [sic] we have to go back to France very urgently.”

The hotel owner rejected this request on June the 4th at 11.40am with the following email: “Dear [name removed for privacy], I’m very sorry for the problem you have home. But I had to make you pay the full penalty because it’s very late to cancel your reservation. Indeed, this email is a bonus of € 150,00. You can spend it in the future whenever you want before December 31st 2019 (making a new reservation, of course).”

Fifteen minutes later (at 11.55am, to be precise) the French tourist told the owner that she had changed her mind, and intended to maintain the reservation, as the owner puts it, “due to a sudden reversal of her grandmother’s health status.”

“Sorry to bother you again, my we tried to find a flight but in the meantime my mother told me not to come back that she was fine so we decided to stay. If the room is still available we still want to come tonight or end of afternoon. Sorry again, is it still possible?”

As the room was still available, the owner said yes, and the French couple arrived later in the afternoon and — appeared — “during and after” their stay to be “satisfied with the room and service.” According to the owner, “she did not complain with us at all. Her bill was Euro 251,50 including Euro 41,50 of extra consumption. We gave her a courtesy discount of Euro 21,50 and she paid Euro 230.”

So far so finished, you might think. However, two days later, on June the 6th, the tourist sent the hotel owner the following email: “Hello [name removed for privacy], I was trying to reach booking concerning the room we booked on Tuesday but realized we booked it on your website.”

“I don’t want to put a bad comment on TripAdvisor about your hotel because you are very nice people but I would like for us to find an arrangement because we were not satisfied at all.”

“I would like a refund,” her email continued, “not of the whole amount but a part of it. We booked only ONE night, the room was EXTREMELY expensive for what it was but we booked it because of the view! Once we get to your hotel, it is a tiny room and the view is horrible! I took pictures! So 210 euros for a room that is not what you offer on your website. It is not right!”

“I attach the pictures of the view. [Name removed] and I are both in the restauration we worked in Palaces in France and booked room for 200 euros that were worth it. Here it is not. So I am waiting for an offer on your side. I am very sorry but it is a lot of money and it’s not [sic] faire to us or any of your clients.”

The hotel owner ignored this message, explaining why on Tripadvisor: “We consider the content of this email an attempt to blackmail us and we did not respond. After a few days, we punctually received her bad review [here] on Tripadvisor.”

While the tourist didn’t get what she was after in this particular instance, given how important Tripadvisor and Booking.com reviews are becoming to hotels, this incident feeds into a broader discussion around the power dynamic between customers and service providers in a digitally disrupted world.

It also is suggestive of what is to come in the future, as nearby hotspots like Portofino become oversaturated, sending more tourists Camogli’s way — which will no doubt prove a challenge for the Italians who, as The New York Times reported on Tuesday, have been overheard making statements like: “Portofino is for the Americans. Camogli is for us Italians.”

How local residents (and Italian holiday goers) will take this change remains to be seen. But either way: hotel owners should take note that customers will no longer be oversold in silence, and tourists should realise that if they use these forums to unfairly pressure an establishment, the other side of the story will likely come out.

Or, you know, we could all just laze around in those electric blue waters, drink up the colourful, “improbably stacked” buildings, turn off our phones, and enjoy Italy’s Golfo Paradiso.