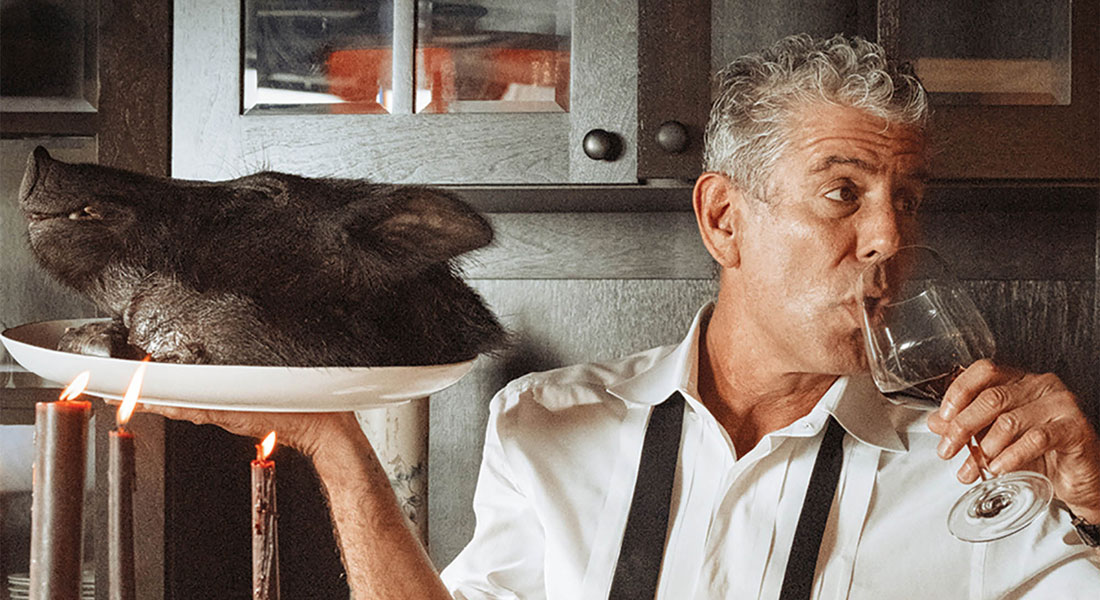 As celiacs rage against the (gluten) machine, hipsters refuse anything but organic IPA, and vegans storm restaurants like militants, the blood-and-fat-spattered heart of the restaurant industry has undergone a PR crisis in recent years.

However, according to legendary chef Anthony Bourdain, “Good food, good eating, is all about blood and organs, cruelty and decay.”

He wrote this in a memoir for The New Yorker’s 1999 Annals of Gastronomy, in a piece entitled “Don’t Eat Before Reading This,” adding, “It’s about sodium-loaded pork fat, stinky triple-cream cheeses, the tender thymus glands and distended livers of young animals.”

Not quite content with that image, he then drove his point home a third time: “It’s about danger—risking the dark, bacterial forces of beef, chicken, cheese, and shellfish. Your first two hundred and seven Wellfleet oysters may transport you to a state of rapture, but your two hundred and eighth may send you to bed with the sweats, chills, and vomits.”

That’s what made the first two hundred and seven so good.

Twenty years have passed since Bourdain wrote this, and if the rising numbers of vegans, self-diagnosed celiacs and inflexible paleo pilgrims are anything to go by, we appear to have forgotten his words.

The crucial elements of good dining are risk, and a strong stomach – both of which fly in the face of most modern diners’ routine of ordering sanitised dishes we know we’ll like.

But according to Mr Bourdain, this is a mistake: “Like most other chefs I know, I’m amused when I hear people object to pork on nonreligious grounds. ‘Swine are filthy animals,’ they say. These people have obviously never visited a poultry farm.”

“Chicken—America’s favorite food—goes bad quickly; handled carelessly, it infects other foods with salmonella; and it bores the hell out of chefs. It occupies its ubiquitous place on menus as an option for customers who can’t decide what they want to eat.”

“Most chefs believe that supermarket chickens in this country are slimy and tasteless compared with European varieties. Pork, on the other hand, is cool. Farmers stopped feeding garbage to pigs decades ago, and even if you eat pork rare you’re more likely to win the Lotto than to contract trichinosis. Pork tastes different, depending on what you do with it, but chicken always tastes like chicken.”

It doesn’t end there. Another ugly consequence of ‘playing it safe’ is having your bacteria-phobia backfire. How? Allow Bourdain to explain: “People who order their meat well-done… pay for the privilege of eating our garbage.”

“When one of the cooks finds a particularly unlovely piece of steak—tough, riddled with nerve and connective tissue, off the hip end of the loin, and maybe a little stinky from age—he’ll dangle it in the air and say, ‘Hey, Chef, whaddya want me to do with this?’ Now, the chef has three options. He can tell the cook to throw the offending item into the trash, but that means a total loss… Or he can decide to serve that steak to ‘the family’—that is, the floor staff—though that, economically, is the same as throwing it out. But no. What he’s going to do is repeat the mantra of cost-conscious chefs everywhere: ‘Save for well-done.’ The way he figures it, the philistine who orders his food well-done is not likely to notice the difference between food and flotsam.”

The only area in which modern society has caught up to Bourdain’s 20-year-old ideals is in our newfound acceptance of butter, a secret Keto Warriors will have you believe they discovered, but which was been a staple in the French diet for hundreds of years.

“Another much maligned food these days is butter,” Bourdain wrote (in 1999). “In the world of chefs, however, butter is in everything. Even non-French restaurants—the Northern Italian; the new American, the ones where the chef brags about how he’s ‘getting away from butter and cream’—throw butter around like crazy.”

“In almost every restaurant worth patronizing, sauces are enriched with mellowing, emulsifying butter. Pastas are tightened with it. Meat and fish are seared with a mixture of butter and oil. Shallots and chicken are caramelized with butter. It’s the first and last thing in almost every pan: the final hit is called ‘monter au beurre.’ In a good restaurant, what this all adds up to is that you could be putting away almost a stick of butter with every meal.”

The takeaway? Put that (whatever it is) on your plate and eat it.