Just over a fortnight ago, we at D’Marge were raving about a Dior suit being worn by David Beckham saying he was a year ahead of his time. Well, clearly we have a famous reader who saw the article and decided to try out the suit for himself but put a fresh new take on it. And honestly, we are here for it.

Charlie Heaton, one of the stars of TV’s Stranger Things, wore the blue Dior at Paris’ Fashion Week – Womenswear Spring Summer 2020 but put his own Gen Y take on it that separates the look from his fellow Brit. The actor was at Fashion Week with girlfriend Natalia Dyer who is also his co-star and on-screen girlfriend in the Netflix series. 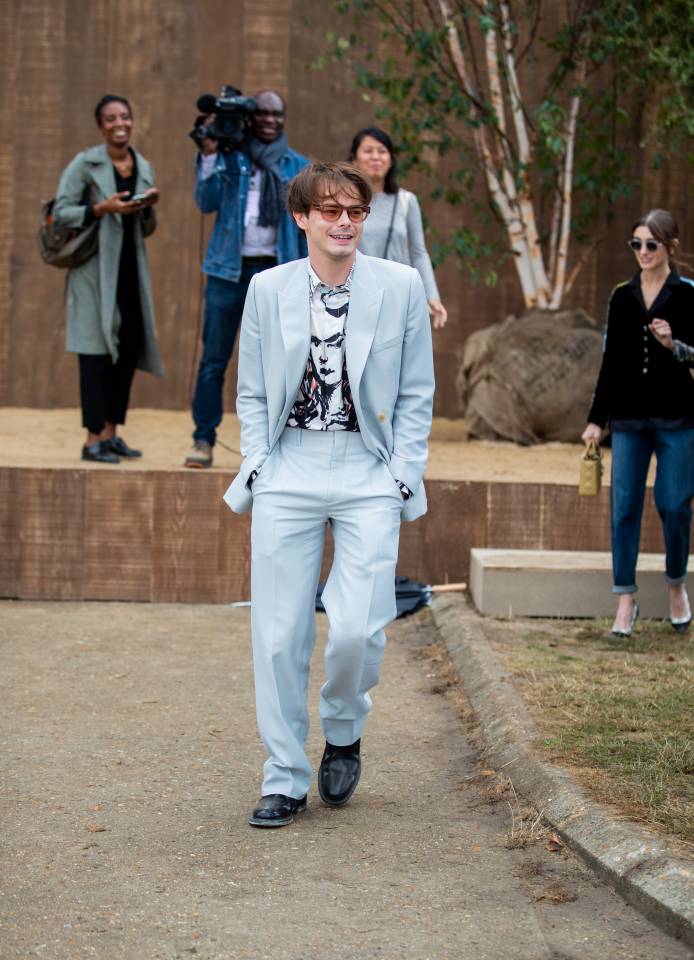 Heaton wore the soft baby blue, double-breasted Dior suit with a Dior and Raymond Pettibon print shirt made out of 100% silk complete with kimono sleeves and mother-of-pearl buttons. To round out the outfit Heaton wore matching trousers with the wide-pant leg, derby black leather shoes, and Dior sunglasses.

His fellow Brit, David Beckham, wore the Dior suit to his wife’s celebratory cocktail party and kept the look simple. He paired the suit with a plain white t-shirt and white canvas high-tops for a simple yet effective look. It’s a relaxed fit on the ex-footballer making it perfect for both day and night.

Both of the celebrities seem comfortable with the wide-legged trouser that seems to be making a comeback in the fashion world. Beckham wore the suit with the buttons closed while Heaton seemed keen to let the world see his shirt, which we can’t fault given how great the shirt looks. Where Heaton is let down is in the size of the suit, which is slightly too big for the young celebrity.

Heaton is still relatively new to the celebrity game but already is proving himself to be one to watch in the fashion sweepstakes. Who knows, maybe next time he’ll be premiering the suit to watch out for.